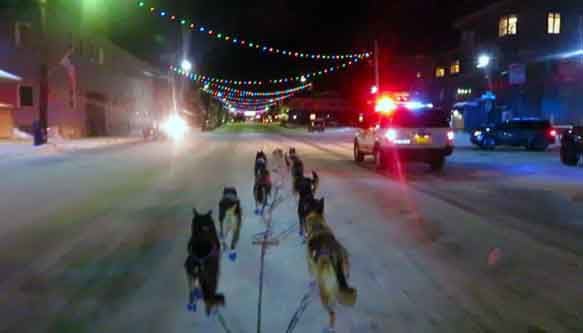 Jessie Royer's team leads her toward the finish line on Front Street in Nome, Alaska, on Wednesday morning. 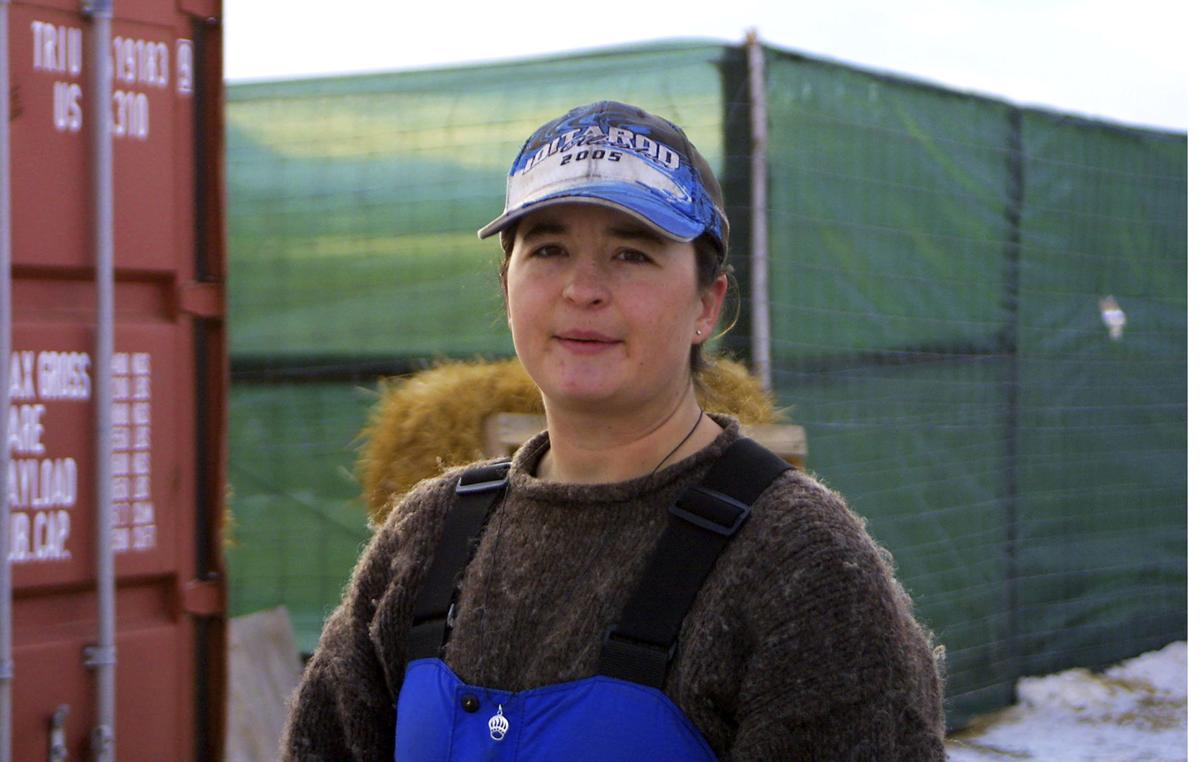 Montana's Jessie Royer said of her third-place finish at this year's Iditarod: "I’ve run 18 of the damn things and haven’t won yet. I was like, ‘Dammit, maybe I’m not good enough. Maybe these guys are that much better than me. Maybe I’m never going to win the stupid thing. But you can’t think like that because I was right up there and one day things will line up.”

Jessie Royer's team leads her toward the finish line on Front Street in Nome, Alaska, on Wednesday morning.

Montana's Jessie Royer said of her third-place finish at this year's Iditarod: "I’ve run 18 of the damn things and haven’t won yet. I was like, ‘Dammit, maybe I’m not good enough. Maybe these guys are that much better than me. Maybe I’m never going to win the stupid thing. But you can’t think like that because I was right up there and one day things will line up.”

BOZEMAN — The first clue that something was amiss came when an Iditarod Insider TV crew on a snowmobile caught up with Jessie Royer as she camped between Cripple and Ruby, roughly halfway into an event that suddenly had found new meaning in the tagline “The Last Great Race”.

Royer, a 43-year-old lifelong Montanan who resides part-time in Seeley Lake, was in the midst of the most impressive of her 18 Iditarod Trail Sled Dog Race runs — arriving first at a checkpoint for the first time ever, initially at McGrath, and soon to repeat the feat at the Yukon River villages of Ruby and Kaltag.

During the interview — featuring a clip of Royer recounting her sled ganglines catching fire from a heat bottle — the reporter asked if she knew about the global coronavirus pandemic, and that the Iditarod was the only sporting event in the world forging ahead.

“I’m like, ‘Really? This is insane!” Royer recalled in a phone interview Monday from Eagle River, Alaska, where she was calculating how to retrieve all the gear she left on the trail plus hauling 20 dogs back to Montana before the border closes.

“I was blissfully ignorant for pretty much most of it. At that point, you’re wondering, ‘Are they going to shut the race down?’ ”

From that moment on, Royer was at once aware of the distant drama while focusing on winning her first Iditarod.

Shrugging off frostbitten fingers related to temperatures reaching 40 below zero, she would eventually finish third on March 18, matching her career best established a year ago. She arrived under the burled arch on Nome’s eerily sedate Front Street roughly seven hours behind champion Thomas Waerner of Norway and 92 minutes back of Alaska’s Mitch Seavey.

Normally, when the shriek of a siren announces the arrival of each musher, festive imbibers pour out of the Gold Rush-era honky tonks on Front Street to toast the accomplishment.

Instead of the usual unfettered revelry, Royer was greeted by race officials and media. Spectators were banned and mushers asked to leave as soon as they could secure flights to Anchorage. The post-race banquet was canceled and the town’s bars and restaurants shuttered a day after Royer arrived; she squeezed in one breakfast before fending for herself as she had for some nine days on the trail.

Royer said she knew the virus implications were serious when Inuit elders in the most welcoming community on the 975-mile route — the wind-battered Bering Sea fishing village of Shaktoolik (pop. 250) — withdrew as a checkpoint. The news sent a shudder through the mushers, she said, in part because they count on shelter against some of the harshest environs on the trail.

“They were going to drop our bags and our straw and set it out of town and leave it for us,” Royer said. “We’re like, ‘OK, and there’s a storm warning coming’. I’m like, ‘Holy crap’.”

But the people of Shaktoolik are nothing if not resilient. They’ve twice had to relocate the town because of erosion related to a changing climate and, knowing the mushers presented little or no virus threat, they wouldn't be denied connection to an event they cherish.

About two miles north of town is abandoned Old Shaktoolik. The villagers swung into action, using a front-end loader to plow a two-mile path, shoveling deep snow out of a dilapidated house, hanging plastic over its shattered windows, drilling a hole in the ceiling for a woodstove, plugging a microwave oven into a generator, setting up cots, and leaving a food spread on a table.

“The villagers were so excited to see us,” Royer said. “We hadn’t barely parked and they had a five-gallon bucket of water, our bags, straw, heat — everything right there for us. How much work and care those villagers did … they worked tirelessly for hours. They are some of the most awesome people.”

The makeshift shelter had only one niggling issue: Heat from the stove melted snow on the leaky roof.

"Trying to find a dry place to sleep was kind of interesting,” Royer said with a laugh.

Such is life on the Iditarod Trail, where will and fortitude are tested every March.

For Royer, who has finished in the top 10 eight times, 2020 presented her best chance yet to reach Nome first.

She had a veteran team, with 12 of her dogs having run a 1,000-mile event. In finishing third a year ago, for the first time she was within striking distance of the leaders until the end.

This year, in addition to reaching three checkpoints first and pocketing extra cash to go with a gourmet meal in Ruby, Royer led for nearly half of the race.

When she arrived at the Athabascan community of Kaltag, where the trail leaves the Yukon River and arcs toward the windswept coast at Unalakleet, she was still in first with one-third of the race remaining. As she prepared her 13 remaining dogs for her required eight-hour layover, though, Waerner’s team pulled in and instead of his huskies collapsing in straw for naps they were frisky.

“They literally looked like they hadn’t even started the race yet,” Royer marveled. “They had just run 600 miles and they were playing around looking happy. It was like, ‘Holy cow. Wow. That’s pretty awesome.’ I knew his was the team to beat.”

Having already taken his second eight-hour layover, Waerner regrouped for 45 minutes and was gone. He maintained a lead of five to seven hours the rest of the way.

Royer braved a blizzard along the north coast of the Bering Sea before arriving in Nome in the darkness around 7 a.m. Wednesday.

“I’m super happy with third,” she said. “It just felt like it was a very competitive field this year. Very tough. We were all super close together. I’m pretty proud of my team.”

For Royer, it's yet another tantalizing step closer to the elusive victory she’ll continue to pursue after unwinding for a month or so, this time back in Montana instead of on her usual post-Iditarod wilderness caribou hunt. Typically an underdog, thanks to limited sponsorship support compared to the top-level sled-dog racers, she has nevertheless managed to crash an elite club — and become the world’s top female musher.

“I had a feeling I had the right team this year,” she said. “I thought maybe we can pull it off. I wasn’t being cocky, just being pretty confident in my team. We did good; there’s just a lot of good teams up here. I definitely think we gave it a run for the money and were as competitive and consistent as anybody.”

Nevertheless, it didn’t escape Royer that it was only Waerner’s second run at what ultimately became one of the strangest of Iditarods.

“I’ve run 18 of the damn things and haven’t won yet,” she said, laughing again. “I was like, ‘Dammit, maybe I’m not good enough. Maybe these guys are that much better than me. Maybe I’m never going to win the stupid thing.

“But you can’t think like that because I was right up there and one day things will line up.”

Photos: Jessie Royer in the 2020 Iditarod