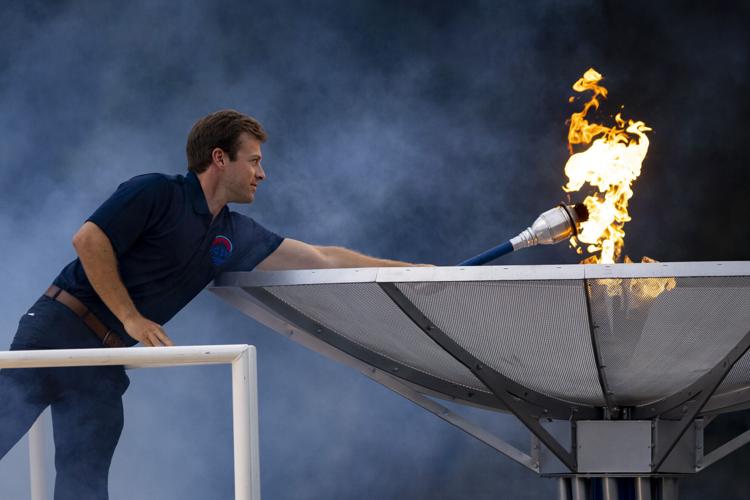 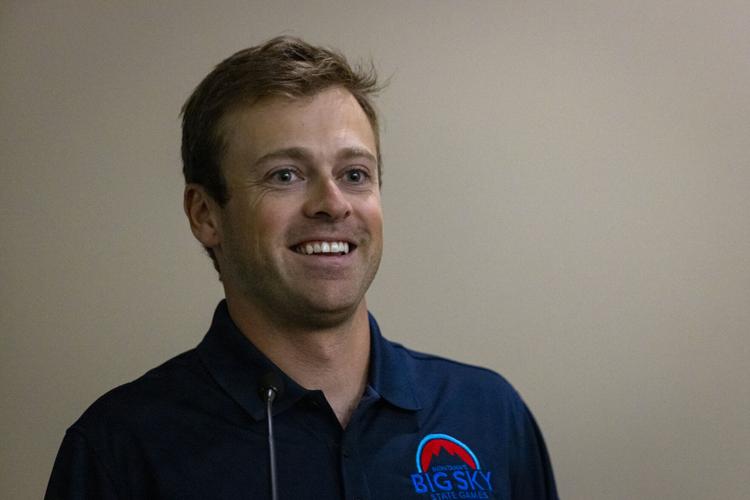 Olympic freestyle skier Brad Wilson smiles as he talks about his athletic career during a media event prior to the Big Sky State Games Opening Ceremony in Billings on Friday, July 15, 2022.

Olympic freestyle skier Brad Wilson smiles as he talks about his athletic career during a media event prior to the Big Sky State Games Opening Ceremony in Billings on Friday, July 15, 2022.

BILLINGS — Brad Wilson found himself unexpectedly emotional Friday afternoon watching some of his career highlights by way of introduction at the Big Sky State Games.

The three-time Olympian from Butte was tabbed as this year's torch lighter after retiring from competitive moguls skiing this spring and the memories are still fresh.

"It's a crazy thing to be done with skiing, you know, and that was like the first time that just kind of hit me." Wilson explained. "It's like you could represent the U.S. and to be able to do that at the same time and always hear 'Brad Wilson from Butte, Montana' is like, it's just something that ... is really, really cool."

Wilson had an 11-year career on the U.S. Ski team, was a five-time U.S. champion and two-time World Championship silver medalist and yet, he admitted being surprised when asked to light the torch for this year's event.

"To get me here, it's just something that I didn't realize is very special because this community has given me everything," Wilson said during Friday afternoon's press conference. "This community did support me when I was first starting skiing. This community brought me to the world stage or my first World Cup is the one that brought me to my first and all Olympics. So huge thanks to you guys to make sure that you're giving these opportunities to these kids to have the same memories that I had."

"It was a really fun ride, going through 11 years on World Cup, being an athlete from Montana and we're proud, you know, because Montanans are so proud. Us Butte rats are even prouder," Wilson joked.

His career took him all over the globe and while he is currently based in Utah, Wilson also has kept an eye on Montana so was happy to get the chance to return.

"I was excited to see where the development of sport is and kind of where it stands, especially with Utah and other countries," Wilson said.

As one of the largest state games in the western United States that encompasses 35 sports and thousands of participants, the Big Sky State Games present an opportunity for athletes of all ages to compete, one which Wilson was happy to lend his support to.

"It does give you a taste of that competition. It is all relevant," Wilson said. "These kids competing at this level is the biggest level they've ever competed at and no matter what level you compete at, you will always have that."

His advice at its most basic for any athletic pursuit is to "enjoy the process."

"Find the small victories. It's going to be tough and it's going to be hard, but make that part something you can enjoy. How do you make that you're just making yourself stronger and better? In the end, that's what we're all trying to trying to do is to strive for perfection, right? And that's what sports are all about, I think is our own path and journey to that perfect race or run," Wilson said. "So I would say just enjoy the grind."

That experience is what he drew on as he progressed from building and learning jumps with his brother in the mountains to progressively higher stages all over the globe.

And now that he's embarking on a new chapter, Wilson is applying those mindsets to other pursuits: coaching with the Wasatch Freestyle team and his newly created furniture building business, Wilson Design.

"What's really cool is being able to take a step back from the spotlight," Wilson said. "It's these athletes, it's them who it's their turn, it's their time to go and experience these amazing opportunities and things."

His story of growing up building jumps on Homestake Pass with older brother Bryon and getting into the sport that way has been retold many times throughout his career in admiration of scrappy beginnings. But as someone who has seen what can happen when kids from Montana get a chance, he also has some insight into what his sport of freestyle skiing needs to be able to continue to grow so the next one gains opportunity.

"There's a lot of people in moguls skiing, especially in Montana, who are done skiing and they just basically volunteer to help these programs grow, and they're still kicking butt," Wilson said. "I mean, there's still amazing skiers coming out of Montana and I feel like that's kind of how it always has been. It's always been just, it's a different culture up here and that's just how it's done. But if we want it to grow, I think we as a sport need to figure out ways to support these programs up in Montana, that way they can, you know, get their air bag or their water ramp facility or new mogul course then I mean, it'll grow. I mean, people want to ski. People love to ski and people want to mogul ski. It's just a matter of having those venues open for them."

While beating 4:16.5 wouldn't officially be a school record, topping the 60-year-old mark during the Big Sky State Games opening ceremonies is a goal for Emineth.