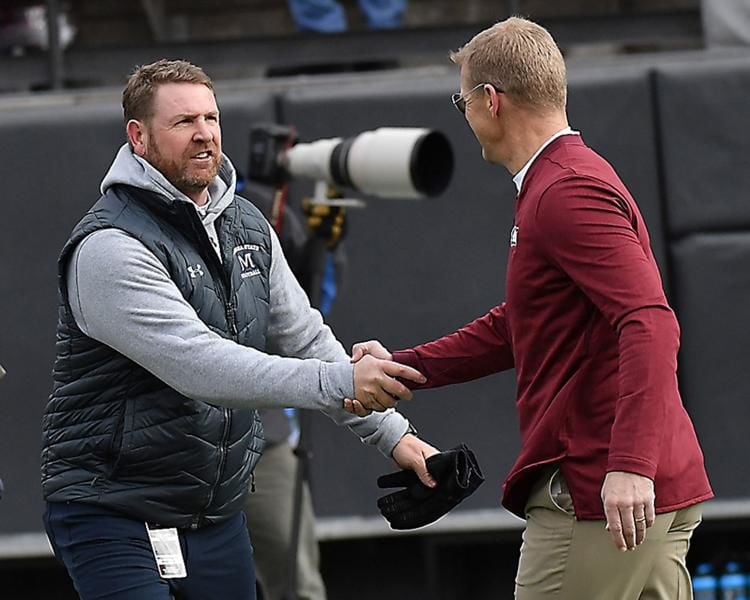 Montana State coach Jeff Choate, left, shakes hands with Montana coach Bobby Hauck prior to the 118th Brawl of the Wild game in 2018 in Missoula. If Choate and Hauck can be civil to one another, why can't all Grizzly and Bobcat fans? Missoulian sports editor Bill Speltz poses the question in this week's column.

MISSOULA — These teams genuinely hate one another.

Sound familiar? Probably because you heard it a half dozen times on television last month when college football's storied rivalries were renewed.

Over the past few months, I've been amazed at the way some readers bellyache when we at the Missoulian place Bobcat football on the front sports page. Even when the Cats are at the bottom of the page and the Griz are at the top, they complain.

Here's a news flash, you disgruntled few: Guys that play for MSU are just guys that share the same state as your football guys in Missoula, dealing with the same day-to-day challenges like wintry weather and skyrocketing costs of living in college towns. The only real difference is the color of the uniform and the location in western Montana.

Over the past few months, we at the Missoulian have tried to appease Griz fans that so passionately hate Montana State by placing Bobcat stories on an inside page. But the truth is, those fans need to grow up and understand we're just trying to give readers more. Heck, they may even discover they have more fun when they start pulling for two Treasure State teams.

Hatred has no place in sports. Save your hate for the Adolph Hitlers and Saddam Husseins of the world.

Ever notice how NFL players react after playing in so-called rivalry games? They walk to the middle of the field to greet one another, regardless of jersey color, and sometimes they even exchange jerseys the way Ravens quarterback Lamar Jackson did with Jets defenders after a recent game.

Growing up just 70 miles from Iowa City, this one-time-passionate Iowa fan loved to root for the Hawkeyes in their rivalry games against Iowa State. I may have hated to see Iowa lose to the Cyclones, but once the game was over, I was almost as happy to see Iowa State succeed as I was Iowa.

Is that so weird? That I would pull for a team that makes me feel good about my home state?

Competitively speaking, hating your opponent is a bad idea anyway. It can be disruptive in the heat of battle because hate and anger go hand in hand and anger can be distracting. Even in a sport as brutal as football, you must keep your wits about you, my friend.

No one hated to lose more than yours truly as a younger man. Not so much in high school or college because I was just happy to earn a starting job. My prep football team went 0-9 but I still had a good time.

In my 30s, after leaving baseball and football behind, I focused on playing tennis because it's cheap and a good workout. Oddly enough, it was this gentleman's game that planted seeds of hatred in my mind for anyone who dared try to beat me.

Call it the Jimmy Connors Syndrome. I had it in my head that being ranked as the top 35-and-over singles player in Iowa — roughly the equivalent of being the best surfer in Nome, Alaska — was my destiny. A Canadian gentleman was my nemesis, leaving me with more runner-up trophies than Bobby Hauck, the Buffalo Bills and the Minnesota Vikings combined.

Oh, I was a nasty cuss. I'd roll the ball out of my pocket onto an adjacent court just to make the Canadian chase it. I'd refuse to socialize on changeovers. I'd walk right toward the friendly chap just so he had to walk around me.

After losing to him seven or eight times in a row in tournament finals, I finally beat the guy. It was my hometown tournament and I was so happy I gave my racket a bat flip.

As I was exiting the courts, enjoying congratulations from friends and family, my old Canadian rival vanished. Minutes later, he showed up with an icy-cold beverage just for me. It was his way of saying nice match.

The competitive cuss in me snapped that day and I became fast friends with the Canadian. Never again would I harbor white-hot competitive hatred toward anyone. How liberating it was.

On Saturday afternoon, I pulled for the Montana State football team to beat North Dakota State. There, I admit it. Better start your campaign to have me impeached as Missoulian sports editor.

Watching the Cats on ESPN wasn't quite as thrilling as watching the Grizzlies, but it was entertaining for a while. Those blue-and-gold-clad Bobcats did the Treasure State proud reaching the semifinal round and anyone that says differently needs to work on his perspective.