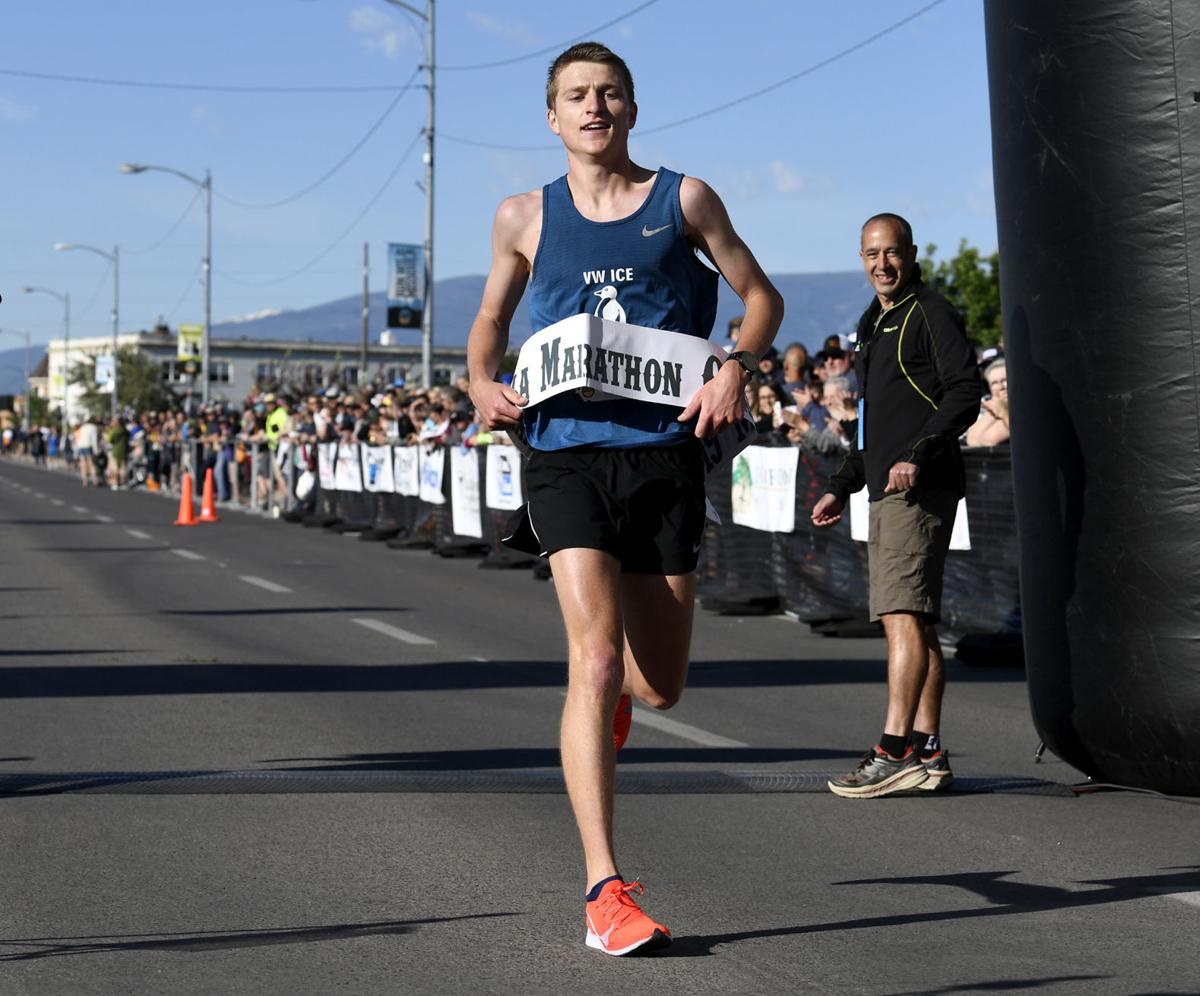 Mark Messmer of Missoula crosses the finish line to win the men's full marathon last Sunday with a time of 2 hours, 24 minutes and 1 second. Messmer's win was a repeat, having won the full marathon in 2018.

MISSOULA — There's a good reason Mark Messmer runs with a penguin printed on the front of his singlet.

Knowing what it is may make the two-time defending Missoula Marathon men's champion more endearing to you.

Mark is a blue-collar working man, you see. He puts in anywhere from 50 to 60 hours a week in July working for a local company called VW Ice.

"They give me time off to run in the busy season, so I like to give them a shout out," said Messmer, an amiable 26-year-old who has put a career in the medical field on hold while he chases marathon dreams.

Mark grew up like a lot of boys in the Garden City. He played basketball, baseball and football. After failing to make the basketball team at Sentinel, he turned to swimming and distance running to quench his competitive thirst.

Messmer was an above-average runner in high school but never set the world on fire. Then after walking on for the University of Montana track team, he mostly toiled in anonymity.

That's why his story is so inspiring: Mark never, ever stopped believing there was a champion locked inside him.

"I guess maybe I have a chip on my shoulder in a way," he offered. "Then it's my competitive nature and seeing what I can push myself to."

What separates Messmer from a lot of accomplished marathoners — even some professional ones — is he hasn't taken a day off in more than two years. He averages about 100 miles a week and believes in the old mailman creed. You know, the one about neither rain, nor snow, nor dark of night ... nothing stops him from lacing up and hitting the road.

That's kooky talk, some might say. Missoula is a nasty sheet of ice for several months in the winter. Plus it gets dark at like 4:30 p.m. in January.

Nevertheless, Mark would rather navigate the ice and spin out a few times than let the weather win. He believes his reluctance to take a day off is the single biggest reason he keeps improving.

"I would have never guessed when I started marathons that after college I'd be able to run a 2:23.59," he said of his winning time in the Missoula Marathon last weekend. "My first marathon I ran 2:40 and thought I was going to die afterwards. Then I thought, well that really hurt but it was kind of fun. Ever since I've been seeing how far I can push myself."

Messmer's next big challenge comes in December. He plans to run in the California International Marathon in Sacramento. If he can somehow shave 5 minutes off his time from last Sunday, he'll realize his ultimate dream with a ticket to the Olympic Trials in February in Atlanta.

"I think if I get in the right race on a flat sea level course that there's a possibility of that happening," he offered. "I know I'm not the best. Even in Montana there's guys faster than I am.

"I just think it would be amazing to get to Trials. In the past they all-expense paid for Olympic A standard times. This year they want the trials to be bigger so B standard gets an all-expenses paid trip. The B standard is 2:19."

Whether he makes it or not, nothing can tarnish what Mark has already accomplished right here in River City. He serves as a reminder to all of us you don't have to give up on your athletic dreams just because you're done with college.

"Last year I kept asking myself, 'When was the last time a Missoula man won the Missoula Marathon? It had been years," he offered. "Since they started offering prize money, it became more competitive and they started to bring in out-of-state talent and put them up in hotels.

"I wanted to prove you don't have to go recruiting people from out of state to find someone talented enough to win the Missoula Marathon."

Don't let anyone ever tell you it's impossible to get your picture on the front of the Missoulian sports section once you're out in the real world. I know a guy who works 50-hour weeks for an ice supplier and he's done it twice.

In what started as a bet, Mark Messmer has been running every single day for over three years.