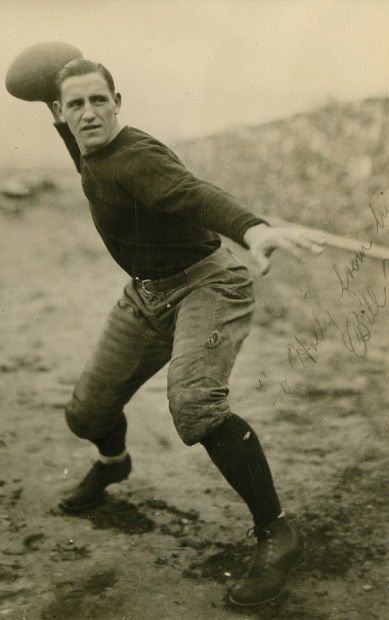 The beauty is that it's hard to be totally wrong when it comes to arguing athletics. There's enough gray area to go around for all of us.

Recently the Missoulian printed a series called Montana Greats in which we celebrated the best athlete from every town. It was a fun and provocative history lesson for this 13-year resident of Zootown.

For starters, I learned the names of a few tiny towns. From this day forward I won't be caught off guard when someone talks about Cohagen, Dagmar, Flaxville, Lustre and Hingham.

There was bound to be some controversy with the project. Someone called me wondering why we left her son off the list since he was a standout alcohol funny car driver. I guess we whiffed on that one.

To determine the best, first you have to decide what constitutes a stellar athlete. We all have our own ideas based on upbringing and experience.

For me, the most admirable of athletes compete in contact sports. My dad loves football, basketball, baseball and boxing and his oldest son loves those sports as well. That's taking nothing away from track athletes, skiers, golfers, auto racers and swimmers.

When I think contact sports, I think warrior. And I want the greatest from my town to be a warrior (or lady warrior, if you prefer).

Twenty years ago, I was impressed with Sports Illustrated's decision to name wrestler Dan Gable as Iowa's Athlete of the Century. He won a gold medal in 1972 and coached the Iowa Hawkeyes to 15 NCAA titles. Rumor has it he used to run up and down stairs with a man on his back to stay in shape.

That said, we need to be careful about just assuming Olympic athletes are the best of the best. That brings me to my point:

Dave Johnson was named Missoula's greatest athlete as part of our Montana Greats series. He was an Olympic decathlete who attended Missoula Sentinel and set the American decathlon record with 8,549 points in 1988 en route to a bronze medal in 1992.

But seriously, how many little boys and girls grow up dreaming to be a decathlete or pentathlete?

We all know that it's football, basketball and baseball/softball that capture the fancy of most American youth. Consequently, the competition to excel in those sports is extremely tough. Heck, even Johnson was a football player at Azusa Pacific for two years before focusing on track and field.

My pick for Missoula's greatest athlete is "Wild" Bill Kelly. And not just because I love the name.

Kelly was Montana's version of Jim Thorpe, playing in the NFL back when they wore leather helmets. He never had any specialized coaching like all these decathletes and golfers and tennis players and skiers and swimmers we all hear about. And he wasn't blessed with super-human size, standing a modest 5 feet, 9 inches.

"Wild" Bill was simply a natural who excelled at quarterback, defender and kick returner. He was arguably the greatest to ever don a Montana Griz football uniform and he's Missoula's only inductee in the College Football Hall of Fame (note: Dave Dickenson is from Great Falls).

In 1925, in his only Brawl of the Wild in Missoula, "Wild" Bill piled up 359 all-purpose yards, over 200 of them rushing. He finished with four touchdowns — three on runs and one on a pickoff — in a 29-7 win. A year later, in the first Brawl of the Wild in Butte, Kelly led the Grizzlies to a 27-0 win, scoring on a run, pass and punt return. He also kicked three extra points and intercepted three passes.

Kelly went on to become one of the premier quarterbacks in the early National Football League. He played alongside Red Grange on the New York Yankees in 1927 and 1928, then moved on to the Frankford Yellow Jackets (the team that would become the Philadelphia Eagles) and the Brooklyn Dodgers.

A product of Missoula's tough north side, it's worth noting Kelly led Missoula High to its first state football championship in 1921. That same year he guided the basketball team to its first state title. He also competed in track and field, played baseball and earned a reputation as a self-taught boxer.

Kelly died tragically in 1931, but he's someone we all need to know about. He was one of the NFL's premier passers in a run-happy era and made a healthy $9,000 wage his rookie year.

That, and the fact Kelly snubbed bigger college programs to play for the Griz, makes him my favorite Missoula and Montana athlete of all time.

That's taking nothing away from Johnson or a number of other Missoula athletes worth crowing about. It's just that "Wild" Bill is the athlete I want representing my town as the best that ever lived.