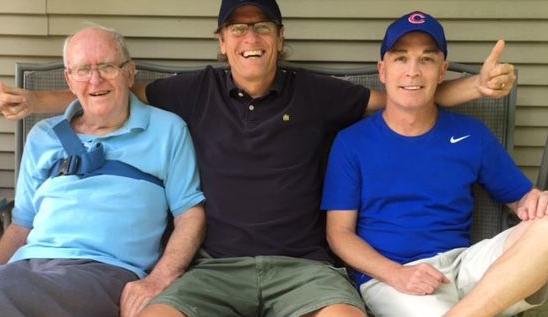 MISSOULA — The wacky part about being a dad is you become a caricature of yourself in your mid-50s.

It's quite liberating, really.

Your family expects you to wear plastic track pants from the 1980s. And to get weepy listening to that song about old dogs and children and to use clichés like "welcome to a thing called reality."

The me you never see falls asleep in an easy chair watching war documentaries at 7 p.m. He prefers to eat dinner at 4 in the afternoon. He allows his 85-pound dog to sit in his lap and lick his face even though it leaves abrasions on his nose.

Oh, and there's one more thing about me: I'm not afraid to be myself watching sports on TV, no matter who is around. My kids, wife and dog have already seen me at my frothing-at-the-mouth worst and heard me utter words that would make Redd Foxx blush (he's a raunchy comedian from the 50s and 60s, kids).

For that I have my father to thank. He showed me as a whippersnapper long ago that it's OK to let loose when it comes to sports, even when letting loose fails to impress others.

Jim Speltz was a fierce competitor in his day. Hated losing worse than a boil on his backside.

He used to punch the basketball off the garage door when he and I lost in a game of 2-on-2. He once threw his arm out playing golf. Yeah, that's right, golf. He put a little too much mustard on his ball while chucking it into a pond after a rotten round.

"I think I tore my rotator cup," he was heard to say, prompting uncontrolled laughter from his sons as they marveled at his customized medical terminology.

That's the stuff I remember from when I was young. Stuff that makes me laugh no matter where life leads. The cussing at the television when the Bears beat our beloved Packers or the Badgers beat our Iowa Hawkeyes.

Somewhere in those memorable sports moments my dad taught me about passion. The kind that transcends sports. The kind that led to my professional career.

It's that kind of passion that compels me to stand when watching the 18th hole of the U.S. Open golf tourney. Or the fourth quarter of the Super Bowl or last inning of the World Series.

It's crazy I tell you. The fire still burns hot. And the torch has been passed to my son and daughter, the former of which makes even hiking into a competition and the latter of which had steam coming out of her ears when the Cats beat Bobby Hauck's Griz.

Sadly, a lot of pro athletes strive to hide their emotions in competition these days. It's the "in" thing to do for quarterback types and the best in the world in tennis and golf.

It's a shame really. The older I get, the more I appreciate raw and real.

Guys like Mike Ditka, Bobby Knight, Jud Heathcote, John McEnroe, Pete Rose,  John Madden ... my kids never had a chance to see them in all their theatrical glory.

Sports are supposed to be entertaining and celebratory, not serene seminars. Heaven forbid one rejoice too enthusiastically over a touchdown or home run.

I guess it's largely up to us parents now to generate passion for our kids to observe. It's a necessity.

Life was not meant to be a robotic exercise for the prim and proper. It's messy business that evokes emotion and demands resilience.

Thanks Dad, for always being yourself. For never holding back or hiding your competitive side.

You learned as you went along because your dad was never around. That makes you an American original.

We need more of those.