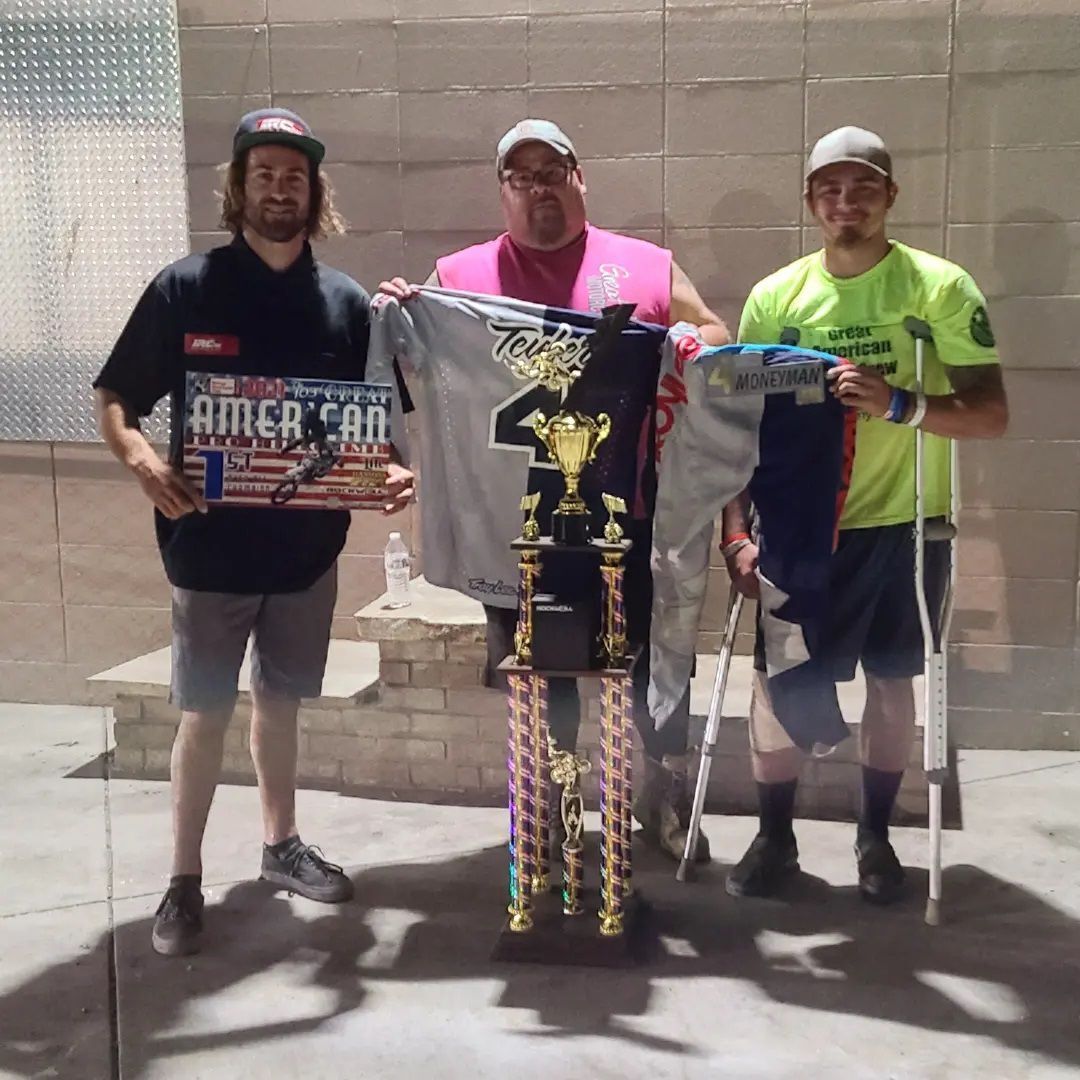 Left to right, Austin Teyler is pictured with Tommy Lindsay's father, Todd, and Tommy's brother, JJ, after winning the overall title at the Great American hill climb this weekend. 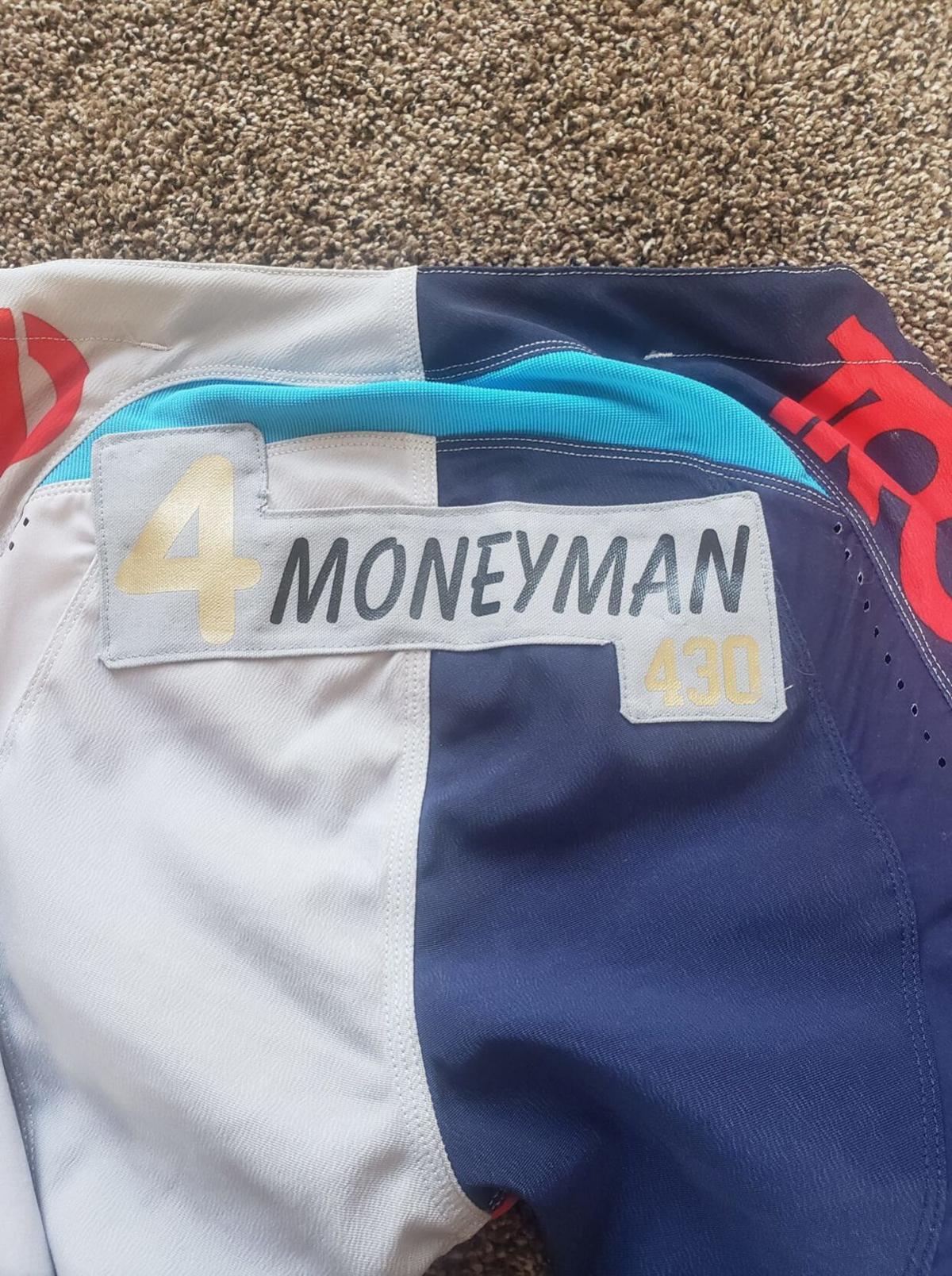 The patch Austin Teyler wore at this year's Great American hill climb in honor of his friend, the late Tommy "MoneyMan" Lindsay.

Left to right, Austin Teyler is pictured with Tommy Lindsay's father, Todd, and Tommy's brother, JJ, after winning the overall title at the Great American hill climb this weekend.

The patch Austin Teyler wore at this year's Great American hill climb in honor of his friend, the late Tommy "MoneyMan" Lindsay.

BILLINGS — This championship was for the “MoneyMan.”

And that’s what made it so special for Austin Teyler Saturday night under the lights at the Billings Motorcycle Club.

The 25-year-old Billings rider was eager to be back on top, a spot he claimed three straight years from 2013-2015.

With his skill riding a motorcycle, and a little luck, Teyler was able to claim his fourth crown.

Teyler was sitting in seventh place in the 701cc Open Exhibition division — the top five riders in that class and the 0-700cc exhibition and 450cc class — qualify for the championship run-off. However, a rider can only be entered once in the 15-person field. If a rider qualifies multiple times, they must choose what bike to ride. Luckily for Teyler, a spot in the championship run-off opened up after qualified riders selected which bikes to compete in the finale on, opening the door for him to have a shot at title No. 4.

Teyler also badly wanted to win in honor of his friend, the late Tommy “MoneyMan” Lindsay, who passed away in a car wreck in February west of Billings.

Lindsay, 17, was a member of the BMC Teyler said, and also a friend of his. Lindsay had won Great American trophy hill climb divisions and also had been a catcher at the Great American, along with participating in motocross, supercross and flat track.

In honor of Lindsay, who was a junior at Billings West, Teyler sported a “4 MONEYMAN 430” patch during the hill climb Saturday. The patch was in gold and black, the colors of the West High Golden Bears, for whom Lindsay played football. The “430” was a tribute to Tommy’s dirtbike number at the BMC said Teyler.

“I was riding in honor of Tommy ‘MoneyMan’ Lindsay. It was crazy how this whole thing worked out the way it did,” Teyler told The Billings Gazette and 406mtsports.com Sunday. “I was wanting to honor him in a special way and it worked out so perfect. They (Tommy and his family) are always on top of the hill catching and helping at the Great American every year.

“I’ve always been kind of close to them. When I found out about the news, I was just bummed and heart broken for them. It was something special for me to honor him this weekend. … I said if I win or lose, this is for MoneyMan. His presence was there and I won it. It was so perfect. It was meant to be for sure.”

Teyler explained that a memorial cross was placed at the top of the championship hill as a tribute to Lindsay during this year’s event.

Prior to riding on Saturday, Teyler said he visited the memorial on top of the hill.

“I went up on top and sat up there by his memorial cross they made up and it was a super sweet moment,” Teyler said. “I just sat there and was talking to myself up top and I just tried to keep it together and I said, ‘You know MoneyMan, I am going to try and do my best this year for you.’”

Teyler — who turned in a winning time of 12.156 seconds when he crested the Bentonite Nightmare in the advanced class to win the overall championship — said it was a special moment when he topped the hill.

“I was screaming over the top of the hill and came back and everyone was jumping up and down,” he said. “Most of them were Tommy’s friends and hill workers and the whole group of people who make it the best. It was the most special moment I ever experienced.”

While he was making his winning run, Teyler felt the presence of his friend.

“I’ve never gotten goose bumps like that before,” Teyler said. “I felt his presence going over the top of the hill. … That’s what made me get it done this year was Tommy.”

at the Billings Motorcycle Club

Motocross teams ranging from 50-450cc will be competing.