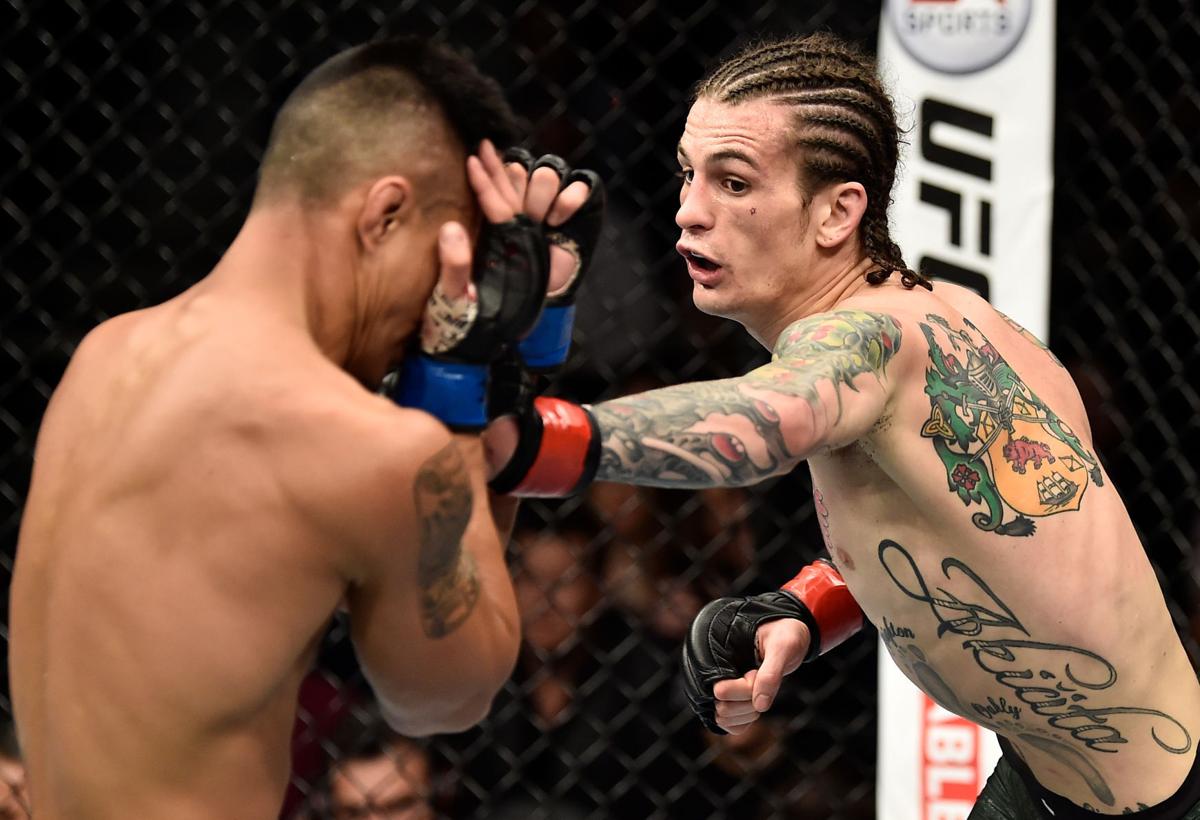 Sean O'Malley, pictured here during UFC 222 at T-Mobile Arena on March 3, 2018, in Las Vegas, suffered the first loss of his MMA career on Saturday. 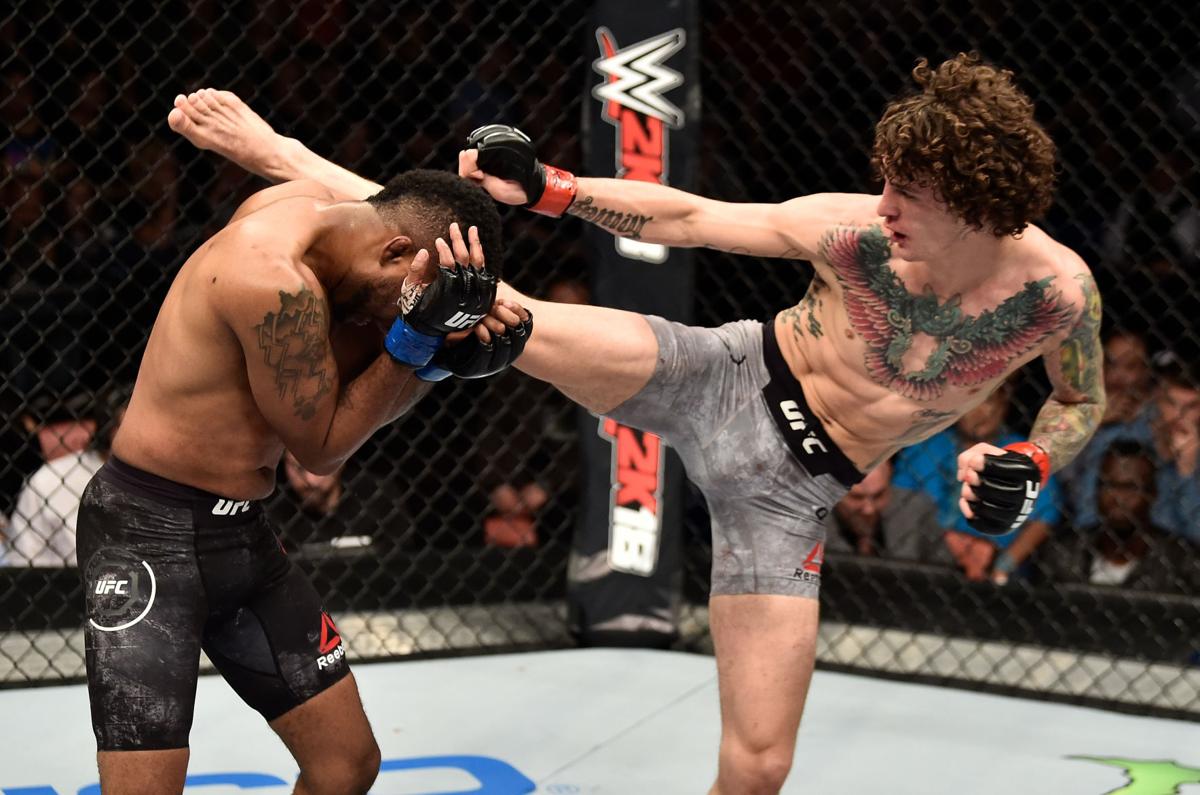 Sean O'Malley kicks Terrion Ware during their bantamweight bout during the TUF Finale event inside Park Theater in 2017 in Las Vegas.

Sean O'Malley, pictured here during UFC 222 at T-Mobile Arena on March 3, 2018, in Las Vegas, suffered the first loss of his MMA career on Saturday.

Sean O'Malley kicks Terrion Ware during their bantamweight bout during the TUF Finale event inside Park Theater in 2017 in Las Vegas.

HELENA – Montanans who have flipped on ESPN at all during the past week have probably seen a familiar face on their television screen.

Helena’s Sean O’Malley is squaring off with Marlon Vera in the co-main event Saturday in Las Vegas at UFC 252.

Dubbed “Sugar” by Johnny Aho, also of Helena, because he was so sweet to watch, the nickname has since evolved into the “Suga Show.”

And in 2020 the Suga Show has not only remained undefeated in the octagon, but become a widely recognized name and personality among fans of combat sports.

In addition to electrifying knockouts – most recently of Jose Alberto Quinonez at UFC 248 and Eddie Wineland at UFC 250 – O’Malley’s personality has magnified his popularity.

His persona isn’t a character he plays.

“Yeah. I think why I've captivated such a large fan base is just being myself,” said O’Malley during a telephone interview. “I think a lot of people aren't themselves and it's just … you can tell when someone's trying to act a certain way.

“I think I just resonate with a lot of kids and even adults. But, I think yeah, just being myself gave me this platform.”

The 25-year-old O'Malley seems to deliver a knockout with uncommon ease. For example, after landing the finishing blow to Wineland, he simply turned his back and walked in the other direction as Wineland went limp and crumbled to the mat.

It’s not a sign of disrespect, but more his training, focus and talent coming to fruition. It’s almost like a video game, how he knows exactly how he wants to attack his opponent and then executes it to perfection.

“It's been my style. I've been knocking people out since I was 16 in Helena,” O’Malley explains. “I've had over 30 fights and a lot of knockouts, so it's just been a progression of my skills getting better. That's just my fight style, is hit people on the chin and it ends up looking the way it does. It's a combination of both hard work and visualizing it.”

O’Malley has been sure of himself since he was a teenager.

Then again, is there a high school sophomore who doesn’t think they know everything?

Well, O’Malley actually did have it figured out.

He left Capital High during the middle of his sophomore year. He decided to pursue his GED at Helena's Project for Alternative Learning so that he could concentrate on fighting.

“I don't even know how to say it. He isolated from the other kids because he was skinny, but he was on traveling baseball, and basketball, and football, and he was a superb athlete,” says Sean’s father Dan O’Malley. “He just knew that he had to get out and do some one-on-one sports in order to get, I think, the recognition he felt he deserved.”

It was a little shocking at first, especially coming from the kid who used to tell on his dad and older brothers – to his mother, Michelle – for secretly watching UFC in their basement.

“Sean was probably, I want to say 12, and Sean ran downstairs, saw us watching UFC fights and said, his exact words were: ‘How do you watch this stuff, it's so disgusting?’ And then, he ran upstairs and dimed us out, and told his mom, so we had to turn it off,” Dan remembers.

Dan never mentions doubting Sean’s decision. It’s hard to imagine there were no second thoughts at any point, but the O’Malleys received plenty of reassurance from coaches along the way.

Ray Moore, who Sean first trained with in Helena, told Dan, “You have no idea what this kid's all about, and I've never seen anybody with this much speed and talent.”

Sean’s next coach was Aho and it was at Aho’s where he got the name Sugar.

Dan also recalls watching Sean fight in Great Falls where Tim Welch judged one of his fights. Welch said that Sean needed to go to Arizona to train immediately.

“So, that's when Sean went down there for two weeks to train and just got smoked,” Dan says. “He got pounded up there for two weeks. But then he came back, worked for developmentally disabled adults, loved it, saved up 2,500 bucks or whatever, and got in his car, and drove 19 hours, and never looked back.”

Sean still trains with Welch at The MMA Lab in Glendale, Arizona, which is led by John Crouch.

During a visit Dan made to Arizona while watching Sean spar, Bellator MMA fighter Benson Henderson told Dan that, “I'm promising you that kid's going to be wearing a belt one of these days.”

And with a 12-0 record for his career, it certainly seems like those sentiments came from a genuine place.

The only public setback he's faced was a pair of suspensions after testing positive for ostarine in 2019.

As he climbs the ranks of the Bantamweight division, the target on his back will only grow larger which means it's important to always be learning new techniques and skills. The moves fans have seen him execute are eye-popping, but Sean assures that we’ve only begun to scratch the surface of what he’s capable of.

In preparation for a given bout, Sean doesn’t spend a ton of time watching film on his opponent. He uses it more as a tool to get a feel for his opponent’s style rather than figure every single intricate tendency.

“I was supposed to fight (Vera) a couple of years ago, so I watched a little bit back then. Then I just rewatched a couple of his fights recently and I just picture myself being a better athlete and a more skilled fighter. So I don't really watch too much. I just get an idea of what they like to do and that's pretty much it.”

Sean’s No. 1 focus for his upcoming fight is simply being able to participate which currently requires a little more awareness and patience than usual.

“Just not getting COVID and staying healthy, and if I can just get into the best shape I can, being able to go 15 minutes as hard as you can and not getting tired,” he explains. “Just getting into the fight and being healthy.”

Fighters were sent a COVID-19 test to administer at home last week. Once that came back negative, they got the green light to make their way to Las Vegas.

“We get tested Tuesday morning, I believe," he explained over the phone. "Then we just quarantine in the hotel. I think UFC has a hotel that's just for the UFC right now, and we wait for those results to get in. Then, I think we get tested again Thursday or Friday. Then I think we tested again the day of the fight. So, lots of tests and lots of sitting in the hotel.”

Once the isolation and tests are completed, Sean will be fighting in the second-to-last bout of the Pay-Per-View card. ESPN reported 1.3M PPV buys for UFC 251, so it’s safe to say that Sean will have eyeballs on him in households across the United States.

Dan, while a fan of the UFC, does not feel the same exhilaration when it’s his son climbing into the octagon.

Win or lose, Sean’s personality could keep him at the forefront of the UFC for some time. He’s been compared to Conor McGregor, in the sense that his popularity won’t subside because of one loss.

This not only makes him marketable for the UFC, but also himself. Sean recently launched a line of merchandise on his website.

“We sold 100 limited edition jerseys,” he says. “That went really well. We're dropping some more basic T's and hoodies and hats. So yeah, we're doing that. Then we're going to be trying to come out with new stuff every 45 days or so. Yeah, exciting stuff coming soon.”

Sean is roughly a 3-1 betting favorite Saturday night, but so far UFC handicappers have not bought into the young star.

After praising Sean and referring to him as, “savant-like,” Lou Finocchiaro, on ESPN’s Behind the Bets podcast, proceeded to predict Vera as the winner of the fight. It seems contradictory, but is common for the gambling community to reject whatever is new and popular.

Sean doesn’t pay attention to this sort of outside noise whatsoever.

“Yeah, I mostly block it out,” he says. “I think I was doing an interview yesterday and they told me I was a 3-1 favorite. Yeah I don't really know unless someone tells me, for the most part. But whether I'm an underdog or a favorite, it doesn't really change anything mentally.”