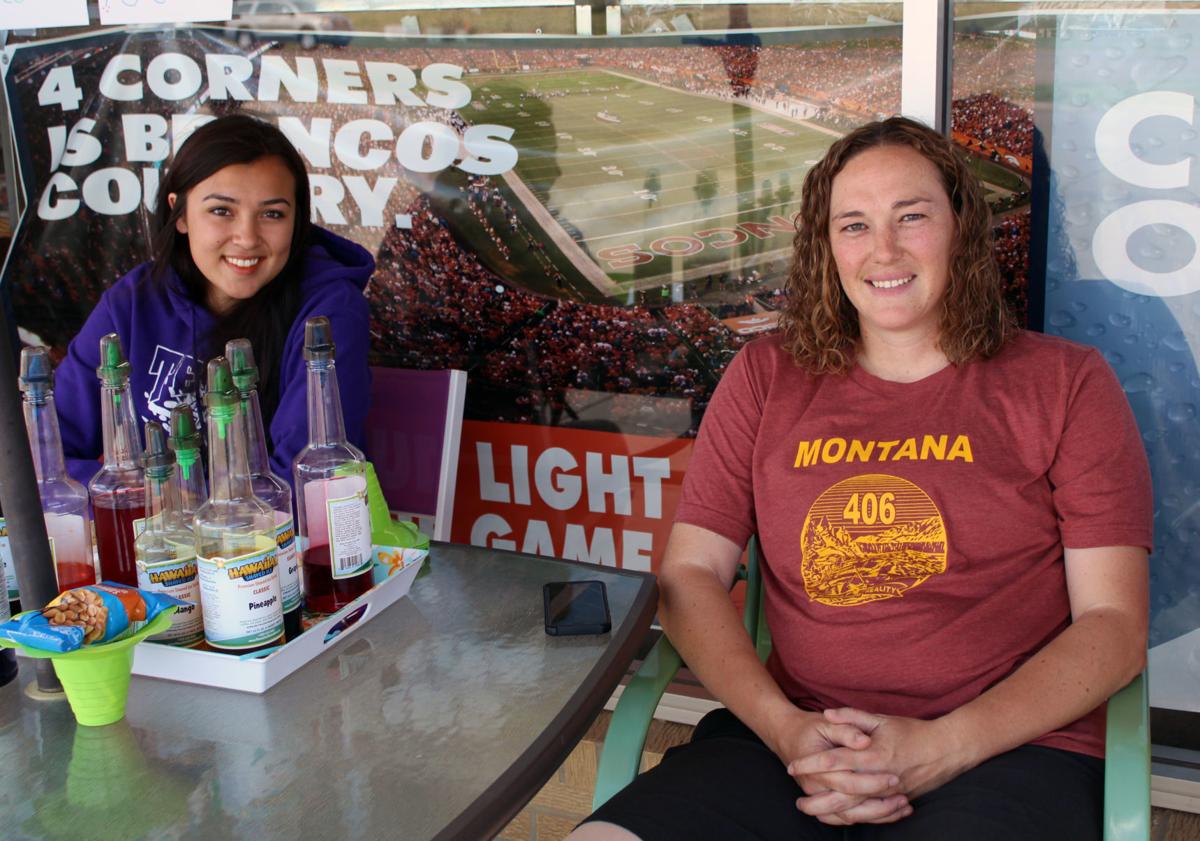 A fortuitous encounter with Lacey Haughian, right, in front of a Terry convenience store illustrated just how challenging picking the greatest athlete from each Montana town has been. On her right is Laiten Lantis, a current Terry sports star who has transferred to Billings West.

TERRY — After pedaling bicycles some 15 dusty miles under an unforgiving sun — half of it on teeth-chattering gravel — my wife, Sherry, and I had a singular mission on a toasty eastern Montana afternoon in the summer of 2019.

That trail of cheers led us to Terry's 4 Corners Convenience Store, a busy little hub in an otherwise sedate ag community squeezed between Interstate 94 and the burly Yellowstone River, a fossil’s toss from the ghostly humps and hoodoos of the Terry Badlands.

Sitting in a shaded area out front, selling shaved ice to parched passersby, were the store’s owner, Leann Lantis, and her daughter Laiten, a gifted athlete who began her basketball career at Terry but finished with Class AA co-champion Billings West.

After introductions, conversation ensued, one sports topic led to another, and upon discovering that Leann had lived, played and coached in Terry for 46 years, I thought her the perfect foil for a question I’d been asking from border to border for nearly a year.

Who is the greatest athlete born, raised or otherwise associated with your town?

Since December 2018, I’d combed the Internet, newspaper archives, books and museums while interviewing friends, colleagues, acquaintances and longtime Treasure State sports aficionados to unearth the same answer for (nearly) every Montana community, literally from A (Absarokee) to Z (Zurich).

Leann hemmed and hawed. Her mind peeled back the years.

Finally, a name: Scott Eaton, a four-sport athlete in the late 1980s who earned a football scholarship to Montana State.

I nodded. In our tiniest communities, many of which have long since bolted their high school's doors or co-opted with neighboring schools due to population drain, that was often a winner’s resume.

Having already written short bios for well over 200 Montana towns (now 261), I couldn’t immediately recall my Terry pick. I tapped my phone for my list and saw that I had another former Terriers football star, Ryan Herman, whose name dots the Montana High School Association record books.

Leann nodded as I rattled off Herman’s exploits.

“Can’t go wrong there either,” we agreed.

A few more minutes of chatter passed before Leann excitedly interrupted the nostalgia.

“Well, here comes the greatest of all time right now!” she exclaimed.

I looked toward the gas pumps to see an athletic 30-something woman striding our way. A decade after the end of her collegiate playing days, Lacey Haughian still looked as if she could dominate the paint on a basketball court, toss a javelin a country mile and wrestle a hapless steer to the dirt.

As Haughian approached, Leann rattled off her many accomplishments in basketball and track, highlighted by her first-team All-America hoops honors at Black Hills State and subsequent career in Sweden, Finland and Germany.

“Our only professional athlete,” Leann concluded, bringing down the proverbial gavel on Terry's Great.

In short order we learned Haughian is running her family cattle ranch and working summers as a Bureau of Land Management ranger. She still plays basketball and dialed up a Twitter video of a game-winning shot she made to win a championship in Germany.

I marveled at my small-world good fortune.

So, I suddenly surmised, the only surefire way to conduct this project was to stop for a beverage in every community hub, chat up the local social nexus and hope the greatest of all time steps out of a pickup truck.

Thus, despite relentless sleuthing, the lengthy list of Greats in this book could be imperfect -- though when it first appeared at 406mtsports.com and in Lee Montana newspapers in November 2019 I was gratified to learn I "whiffed badly" on only one community. The remaining disputes were of the type of barstool debate I'd wanted.

Readers won’t agree with every choice. That’s the nature of any "the greatest" list.

But I’m confident a powerful case can be made for every Great on these pages.

A few unearthed treasures surely remain in distant outposts. Some of our choices likely could shift from towns where they starred in high school to nearby map dots where they actually lived (spoiler alert: think Volborg bull-riding champion Jess Lockwood, who attended high school in Broadus).

As such, with revisions surely in our future, we welcome hearing from you — whether it’s to present a name for a far-flung community or to update a former athlete's current whereabouts.

After all, as we discovered on a parched July afternoon in eastern Montana, when we went looking for a cold beverage and stumbled upon Terry’s "Great", local knowledge is second only to being there -- and a little luck.

What other nuggets must there be from towns across Montana, large and small, thriving or shrinking? Who are the Treasure State’s other Larry Duffs?