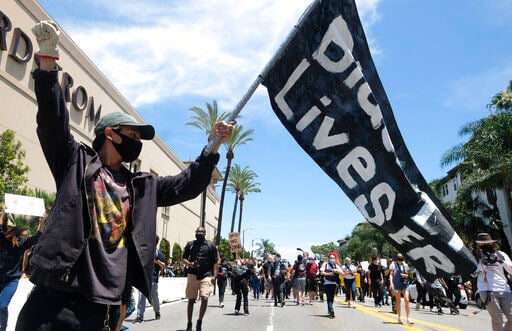 A man holds a flag during a protest over the death of George Floyd in Los Angeles on Saturday. Protests across the country have escalated over the death of Floyd, who died after being restrained by Minneapolis police officers on Memorial Day. 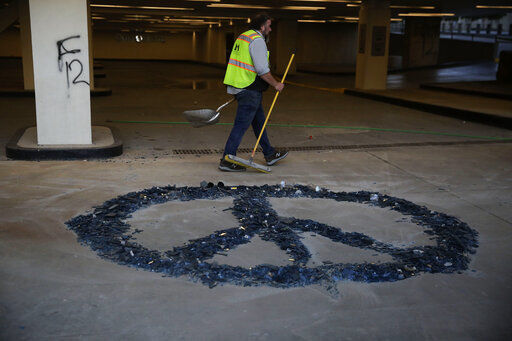 Bill Tracy walks past a peace sign he made from broken glass near the Omni Atlanta Hotel at CNN Center in the aftermath of a demonstration against police violence on Saturday in Atlanta.

A man holds a flag during a protest over the death of George Floyd in Los Angeles on Saturday. Protests across the country have escalated over the death of Floyd, who died after being restrained by Minneapolis police officers on Memorial Day.

Bill Tracy walks past a peace sign he made from broken glass near the Omni Atlanta Hotel at CNN Center in the aftermath of a demonstration against police violence on Saturday in Atlanta.

“There comes a time when silence is betrayal.” — Martin Luther King

BOZEMAN — I was 9 years old when Martin Luther King was assassinated in 1968, uncorking a torrent of pent-up rage in many American cities, and as I scan the landscape a half-century later in the aftermath of George Floyd’s killing in Minneapolis, three words sadly come to mind.

Oh sure, Southeastern Conference rosters are full of African Americans now; SEC football had zero for the first seven autumns of my life. I had just turned 7 when Texas Western won the NCAA basketball championship with five black starters, shattering the absurd notion that winning teams needed a white starter for structure and discipline.

It is no longer an aberration to see black doctors, actors, pilots, engineers, educators, scientists, coaches, CEOs and others in lofty positions serving mainstream America.

We’ve even had a black president.

Yet, obviously and astonishingly, a core rot persists.

And while I’ve long been cognizant of white privilege, partly from listening to the thousands of African Americans I’ve come to know and/or interview in four decades of sports journalism, never has it been so gut-punchingly stark as it is today.

We’ve seen white people armed with assault rifles storm the capital in Michigan without reprisal or rebuke while demanding the country “reopen” amid a pandemic that has killed more than 100,000 Americans. We don’t have to imagine the response had they been African Americans wearing Black Lives Matter shirts because we saw it in Minneapolis, Atlanta, Louisville and elsewhere before the counter-productive looting began.

The contrast isn’t limited to African Americans, by the way.

Just four summers ago, our American Indian neighbors in the Dakotas were met with rubber bullets, fire hoses and attack dogs on their own sovereign lands when they peacefully protested a pipeline that threatened their basic right to clean water.

I've always found such overt and institutional white privilege abhorrent and inexplicable.

My parents, both college educators, taught me that people are people, regardless of ethnicity. I reflexively blanched when the Ozarks wing of my family asked upon my return from my first semester at Arizona State if my new home had many “coloreds”.

In many years of covering college basketball — teams of African American predominance — I saw only diverse collections of boys-to-men with the same dreams and fears as any other student.

And yet, over time I’ve had to confront my own culpability regarding race and privilege, however nuanced.

A couple decades ago, after following Oregon State basketball for a few years, I wrote about an African American player who’d found academic and social relief in leafy, small-town Corvallis after escaping his drug-infested neighborhood in California. Clearly, it wasn’t my first such story, for I was soon cornered by a black colleague with Portland's Oregonian.

“Great story, Jeff,” he said, “but when are you going to quit with the ‘brothers escaping the ‘hood for sanctuary in lily-white Corvallis’ angle?”

He was right: I’d been writing to a subconscious narrative about black athletes.

Turns out the narrative was not only broad-brushed but off-key as well.

A short time later, I was invited — with enormous trepidation, I learned later — to speak, but mostly listen, at a weekly evening gathering of minority athletes. The caveat was one hard-and-fast rule: Once the doors closed, what was vented in that auditorium stayed in that auditorium.

I stood on a stage, a minority of two (the other white person was the football team’s quarterback) out of perhaps 150 athletes. After two boilerplate questions, the outspoken star running back began grilling me from the back of the room about media treatment of black athletes, on both the sports and news pages.

What followed was two startling revelations: Collectively they distrusted, to the point of anger, the police and … the media (hence, the trepidation).

Stories about being pulled over for “DWB” (driving while black) were routine. I learned one reason a basketball player left for a more urban school was he’d experienced walking off-campus with a white girl and having a patrol car slow and ask the girl if she was OK.

My indignation froze as the topic shifted to the media.

The athletes were convinced, not without justification, they had little voice because the sports writers they’d known were tight with coaches and the crime reporters were tight with cops. As transients, they were outsiders resigned to quietly doing their jobs and moving on.

I doubt this was unique to a college town deemed as livable as any in America.

I wore the proverbial bull’s-eye for some two hours, listening more than talking. Afterward I was struck by how many players made a point of shaking my hand.

In the end, they just needed someone of privilege to hear them and at least get some understanding of fundamental realities a white male could never fully comprehend. We’d formed a loose bond that changed the way we perceived each other.

Silence is indeed betrayal (hence this column), but it seems to me privileged white America also must listen the way the police chief of Martin Luther King's hometown of Atlanta has listened while her city burns.

We should’ve been listening long ago and when Colin Kaepernick took a knee, but no. So here we are again, a black man dead over a counterfeit $20 bill in just the latest in an egregious string of race-related tragedies that has unleashed a powderkeg of rage similar to 1968.

Overt and institutional racism like Amy Cooper's is an obvious target, but a cultural overhaul to stamp out the subtler core rot is needed, too.

I’m reminded of my grandfather, a brilliant and highly educated man who as a high school principal in northwest Indiana purportedly orchestrated the state’s first football game between white and black schools. While touting his color-blindness, he would argue endlessly that genetically whites were superior intellectually and blacks superior physically.

Racist? No way, in his mind.

He broke his silence plenty, but he didn't listen or ever truly know a black man. That's where privileged America must start and then act, or else ...

A Lodge Grass native was hired to be the Indians' head girls basketball coach.