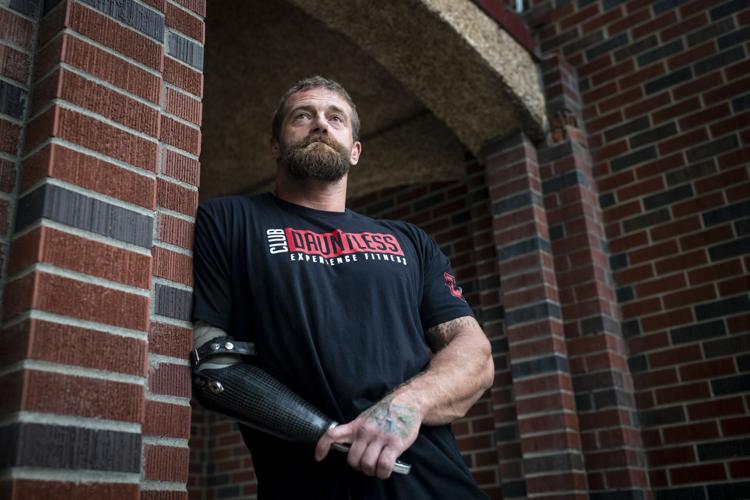 Anthony Hope poses for a portrait outside of Pilgrim Congregational Church on Saturday. Hope will be competing at the International Federation of Armwrestling Championships beginning Friday in Orlando, Florida. 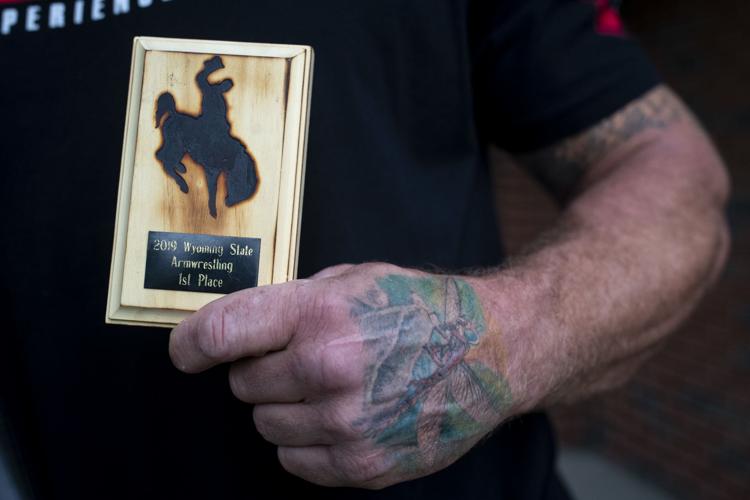 Anthony Hope poses for a portrait outside of Pilgrim Congregational Church on Saturday. Hope will be competing at the International Federation of Armwrestling Championships beginning Friday in Orlando, Florida.

BILLINGS — Anthony “Tony” Hope and his family traveled this week to Orlando, Florida, to compete in this year’s International Federation of Armwrestling Championships.

Hope and his wife, Lanea, are one of the best stories at the tournament. They are representing Billings, and a small group of hardcore local arm wrestlers who compete throughout the Unites States.

The group meets every Saturday at Billings' Pilgrim Congregational Church. The "Brotherhood," as they call themselves, is an eclectic group of veterans and newcomers all looking to compete, sharpen their skills and have a good time.

Hope’s road to the world stage has had his fair share of struggle, and triumph over adversity. Hope is an amputee. He competes with one arm.

The 40-year-old Miles City native and father of four recently sat down with The Billings Gazette and 406mtsports.com for an interview in advance of the tournament. Hope is set to compete beginning Friday, and the tournament ends Monday.

“A meat grinder accident when I just 2 years old took my arm," he explained. "I was so young. I guess I never lost it. I was too young to understand the loss.”

Hope’s right arm is partially amputated just below the elbow, four inches down.

“I don’t know what it means to be handicapped. I never did,” he said.

Hope briefly touches on his past and his drive to thrive.

“I am a meth addict in recovery,” he said with a gleam in his eye. “Being in recovery is an everyday job, 24/7, 365 days a year. No vacations. It is a conscious effort, no doubt about it."

Hope says his path to sobriety led him to the Brotherhood.

“My life that was completely unmanageable. I was bringing the outside into my home,” he said. “I was out of control and about to lose everything.”

Hope was looking for the right lifestyle to keep him on a good path.

“I realized at an early age I was very competitive. Having surmounting strength in my left arm, my passion for arm wrestling began to take shape,” he said.

Hope recalls watching a film when he was 13 that gave him all the inspiration he needed.

“The movie with Sylvester Stallone ("Over the Top") comes to mind,” he recalls. “He (Stallone) was a blue-collar arm wrestling hero going against all odds to compete against the very best. I could relate. That movie stuck with me.”

A chance encounter with Billings' own arm wrestling legend and Brotherhood member, Jim Wright, set him straight and in the right direction.

“I was at Walmart and I saw this stout guy wearing an arm wrestling shirt. I had to ask him what, where, and how,” Hope said.

Recalls Wright: “He saw me and looked really curious. First thing I noticed was he had a huge left hand, and terrific grip. Then I noticed he only had one arm. He asked me about competition. I thought to myself, I like that, with a grip like that, that young man has some potential.”

The rest is history.

Arm wrestling is a lifestyle

Hope had his first taste of the competition in 2019 at Rimrock Mall’s Manfest.

“I totally got my butt kicked, but I got a taste of the action and I knew I was in it to win it from there on,” he said.

Since then, Hope has picked up the pace and never looked back. He is the No. 1 ranked left-handed arm wrestler in Montana. No handicap.

“I am what they call a high-hooker or top-roller,” he said.

While he competes left-handed, Hope wears a prosthetic on his right arm.

In explaining his technique, Hope said his left hand (puller) is positioned up high over the opponent's counter, and his right arm is called the "pusher" as the prosthetic hook grips the peg on the table and is pushed as leverage.

“I have to admit,” Hope says, “I am my worst critic. It is a love/hate relationship with my competitive drive.”

Hope takes his competitions seriously. He studies video on what he could improve on before every event.

“I got my first big win at the 2021 Wyoming State Championships. Bringing back home first place really set the tone on my work ethic," he said.

Lanea Hope and three of their four children all compete together when the opportunity arises. Lanea will also compete at the worlds this year.

Lanea, a registered nurse, pulls both right and left-handed in the women's 150-pound division.

“Being able to share the experience with my family has been the best reward, win or lose,” Tony Hope said. “Watching my children having fun with my wife next to me is the best."

The world competition in Orlando is Hope’s first at the level. The annual event will be weighing in juniors, masters, grand masters, senior grand masters, and ultra-grand masters for competitors from around the globe.

“I feel excited. Preparation is everything," he said. "I will surely give it the best that I got to make it to the top. Let them know how we make ‘em in Montana.”