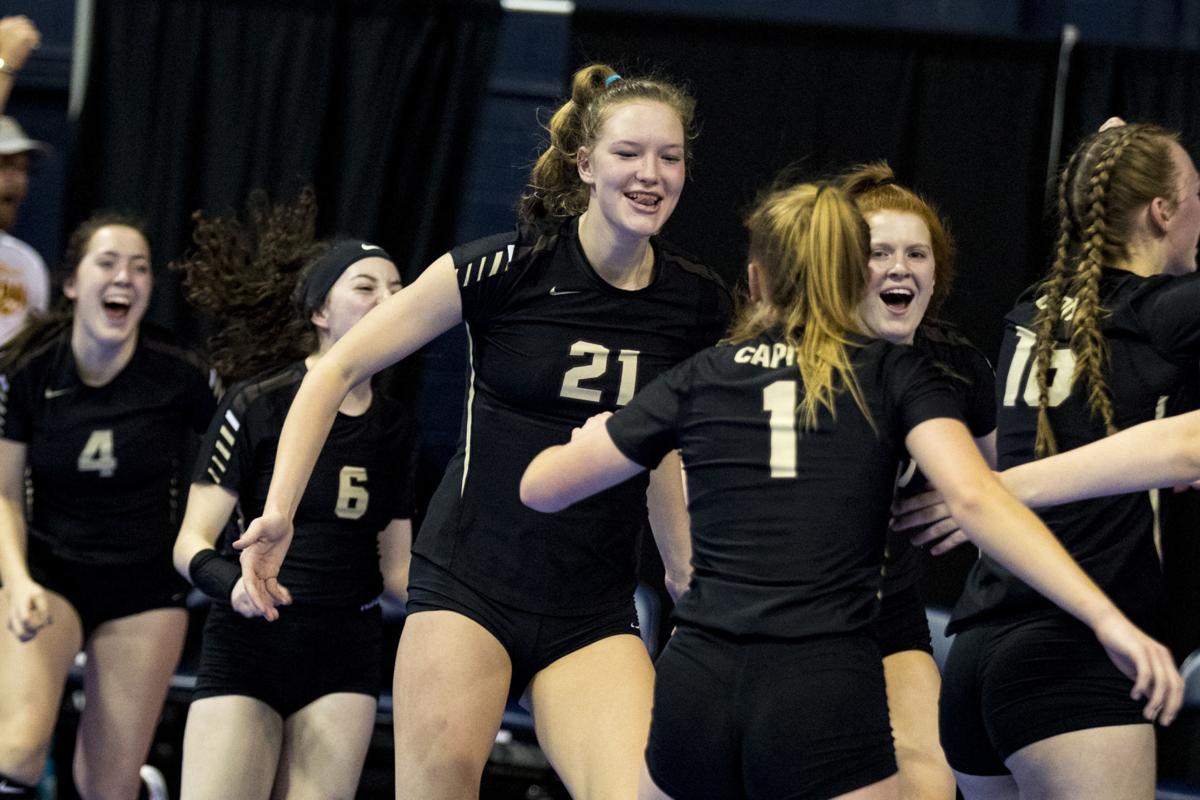 Helena Capital's Paige Bartsch (21) celebrates with her teammates at the Class AA state tournament in Bozeman. With Bartsch and others back, the Bruins should have a good chance at winning three in a row next November. 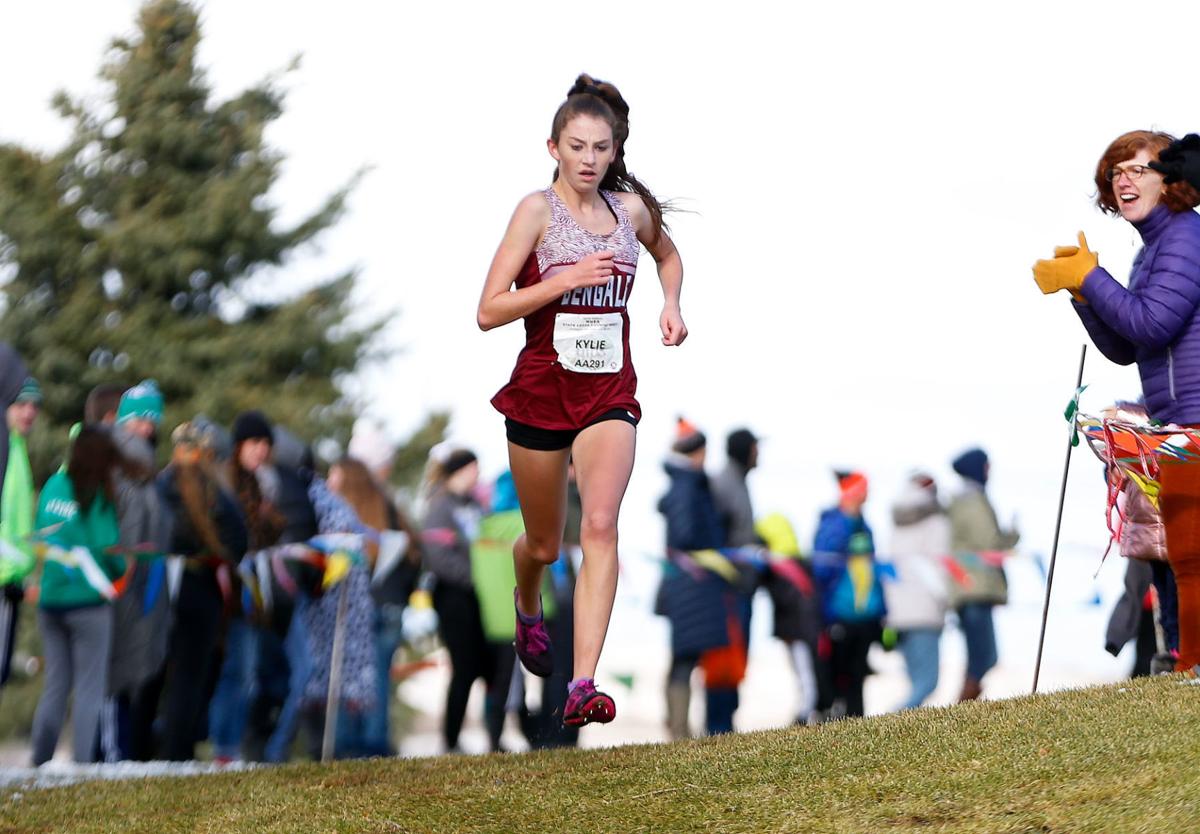 Helena High's Kylie Hartnett runs at the Class AA state cross country meet last fall. She will run for a second straight title in the fall of 2020.

Helena Capital's Paige Bartsch (21) celebrates with her teammates at the Class AA state tournament in Bozeman. With Bartsch and others back, the Bruins should have a good chance at winning three in a row next November.

Helena High's Kylie Hartnett runs at the Class AA state cross country meet last fall. She will run for a second straight title in the fall of 2020.

It's a new year and you know what that means — resolutions. I'm not a big fan of resolutions and making them is about as smart as making predictions.

But one prediction that I feel confident in making, is that the Helena sports scene will be littered with hardware in 2020, both from teams and individuals.

In looking back, it really was a banner year for local sports. Helena High won its third straight Class AA state title in girls basketball, Helena Capital won a second straight title in volleyball and capped a perfect season by beating Helena High in a historic All-Helena final.

That along with a number of other individual state champions, will make it a hard year to top.

But, and here I go making predictions, we have an exciting year ahead of us.

With winter sports in full swing, local sports fans won't have to wait long. By next month, Helena could be crowning more state champions in both swimming and wrestling.

Robert Wagner and Parker Keller of Helena High are returning state swim champions, while the Bengals, who finished third as a team last season, should also have a good shot at bringing home a team trophy too.

Carson DesRosier is another guy that will be looking to repeat as a state champion next month, which the Capital product will attempt to do in Billings, at the All-Class State Tournament.

Last season, as a freshman, DesRosier won the 120-pound title in Class AA, setting him up for a potential run at being a four-time champion. A different weight class makes things harder to predict, but if DesRosier can deliver, the possibility of him being the first four-time champion from Helena becomes much a more realistic goal.

On the basketball court, some may doubt the ability of the Helena High girls to win their fourth straight title after a 1-2 start, but it's early and Class AA is wide open, so it's way too early to count out the Bengals.

The same can also be said for Helena Capital, the crosstown rival and defending Western AA champs. The Lady Bruins are 3-0 and fresh off a sweep of Billings Senior and Billings West, making them look as ready as anyone to knock Helena off that perch.

After getting fourth last season and behind the play of Dani and Paige Bartsch, the Bruins should certainly be in the mix for a trophy, along with the Bengals, who will be a tough out if they can make it back to state.

Capital is also poised for a run in boys basketball as the high-scoring Bruins should be in the state tournament mix, along with Helena High, which is 0-3 but has enough time and talent to recover.

Both Carroll basketball teams, which made runs at the national tournament a year ago, are set to contend for berths once again, as well as in the Frontier Conference.

The football program has momentum too after finishing 25th in the final NAIA poll, following a 6-4 debut season for head coach Troy Purcell.

Winning, excitement and momentum, all things the Saints have right now, help with recruiting and that's where games are really won.

Devan Bridgewater and Matt Burgess certainly made instant impacts this season. Bridgewater brought stability to a position that lacked it and Burgess is the kind of back that reminded you of Carroll's glory days.

The road back to the top of the Frontier Conference won't be easy, but the Saints are at least on the right track.

The same can be said for Helena High, which brings back a really talented quarterback in Kaden Huot and a defensive wizard in head coach Scott Evans. That tandem should make the Bengals a contender in the years to come, starting next fall. And even though Helena Capital will need to reload, the Bruins won't be alone on that front, plus, there's talent waiting in the wings.

Hartnett, who won the Class AA state title and the Mountain West Classic last fall, something no other Bengal has ever done, will be looking for a repeat performance.

Her team, which finished third this past season, should also be in the mix for another trophy, as well as Townsend, which should have a solid shot of defending its Class B state title.

Capital volleyball, which successfully defended its state title in November, with an undefeated season no less, is poised to pull off its own 3-peat as the Bartsch twins and Audrey Hofer, each All-State performers and Division-I commits, are set to return.

The Bruins may not be quite as a dominant next season, considering they weren't even pushed to a fifth set in 2019, but predicting Rebecca Cleveland's team to win a third straight title is anything but bold.

Neither is predicting another fascinating year of local sports in 2020.

The holiday break is over and it's back to basketball for Helena High and Helena Capital.