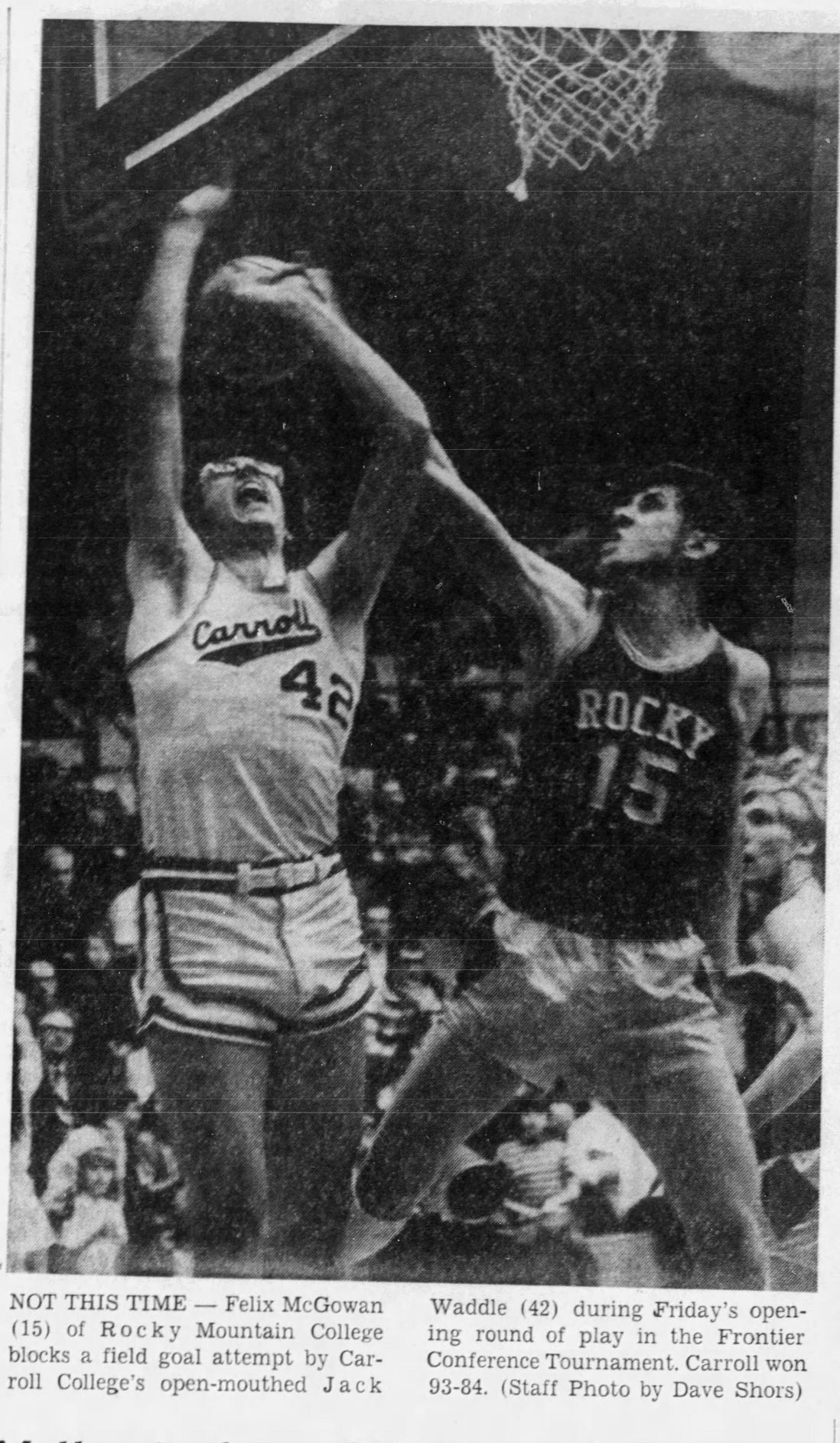 Felix McGowan is a 2021 inductee into the Montana Indian Athletic Hall of Fame.

Felix McGowan is a 2021 inductee into the Montana Indian Athletic Hall of Fame.

McGowan took it from there.

For his exploits as an athlete and a coach, McGowan will be inducted into the Montana Indian Athletic Hall of Fame this summer.

Granbois, himself an Indian Athletic Hall of Fame inductee and 406mtsports.com’s “Montana Great” for Poplar, worked with McGowan in the post position on the basketball court. McGowan absorbed all he could from the decorated coach.

Standing a lean and lanky 6-foot-5, with an abundance of tinsel strength on his 165 pounds, McGowan led Poplar to its first conference basketball title in 31 years in 1968. He averaged 19.5 points and 19.7 rebounds per game his senior season, and concluded his career with 1,143 points and 897 rebounds — which still ranks fifth all-time in the state, per the Montana High School Association.

“If it wasn’t for the crafty Tom Escarcega for getting me the ball, my stats would have been non-existent,” McGowan, now 71, recalled of his point guard. “We ended up winning our conference my senior year, but lost out at divisionals. There was no district tournaments back then.”

McGowan recalls some of the powerhouse players he went head-to-head with. Back then, the teams to beat for Poplar were Circle, Plentywood, Baker and Scobey.

One fond memory was playing against Madoc's Tom and John Morrison of Scobey High. Tom eventually had a son named Adam, who starred at Gonzaga and won two NBA championships.

“Didn’t surprise me one bit that kid (Adam) could play like he did,” McGowan said. “The Morrisons were tough. I played them later in college (Northern Montana College).”

After a stellar four-year high school performance that included accolades in football and track as well, McGowan enrolled at Rocky Mountain College in 1968 and didn’t skip a competitive beat while playing under Battlin’ Bears head coach Jack Ecklund.

As a senior at Rocky, McGowan led the Frontier Conference in scoring. He averaged 19 points and also grabbed nine rebounds a game.

His crowning basketball highlight was snapping a 13-game losing streak to Eastern Montana College, now Montana State Billings. McGowan’s primary objective was to keep 7-foot-2 Yellowjackets center Bill Mummer out of the paint and off the glass.

McGowan also reputedly was the first player to dunk on both baskets in the new Fortin Center, still Rocky’s basketball home. And he was a member of Rocky’s record-setting mile-relay team in track.

Graduating with a degree in education in 1973, McGowan returned home to the Hi-Line and became a teacher in Brockton. That same year he would take the head boys basketball coaching position and guide the Warriors to a district championship.

After two years with Brockton, McGowan moved back to Poplar on the Fort Peck Indian Reservation, where he taught and assisted under head coach Don Paulson. The duo coached Poplar to two Class A state titles.

All the while, he was ranching, farming and competing in rodeo during the summer.

McGowan looks at his accomplishments and emphasizes his love for the games and love for his community.

“I am very proud and honored to have grown up in Poplar,” McGowan said. “Being a Chippewa native from the Little Shell Band of North Dakota I always found a strong kinship to the people of Poplar. Home is what you make of it. I am Poplar proud.”

McGowan’s legacy extends beyond his own achievements. His three sons followed in his footsteps in education and sports.

His eldest, Felix Michael, was an all-state basketball player for Poplar in 1987 and 1988. He walked on at at Montana State as a freshman, transferred to North Idaho College and eventually secured a position playing at Gonzaga. He finished with a degree in biology.

Scott McGowan, the second child, was all-state in track and cross country for Poplar. He became a four-time All-American runner for Montana.

Mathew McGowan, the youngest, followed in the family all-state tradition. He eventually played basketball for Dickinson State and then Minot State in North Dakota, where he also ran cross country and track.

“Raising my children and watching them grow has been my greatest feat,” McGowan said. “Growing up in Poplar can be challenging at times, but I always told my kids to be proud of where they came from.”

McGowan said he is honored to be inducted into the Montana Indian Athletic Hall of Fame.

“Years of hard work and a love for the game I know my parents are looking down and are smiling,” he said. “Family and community is what is really all about in the end.”

The McGowan competitive legacy spans nearly 60 years. His contributions to basketball have left a legacy on the reservation.

Now a grandfather of nine with one on the way, McGowan continues to enjoy watching the legacy grow.

The fourth part of our Montana Greats project features some of Montana's greatest athletes from Madoc to Pryor. Don't forget to check out the first three parts for A (Absarokee) through L (Lustre).