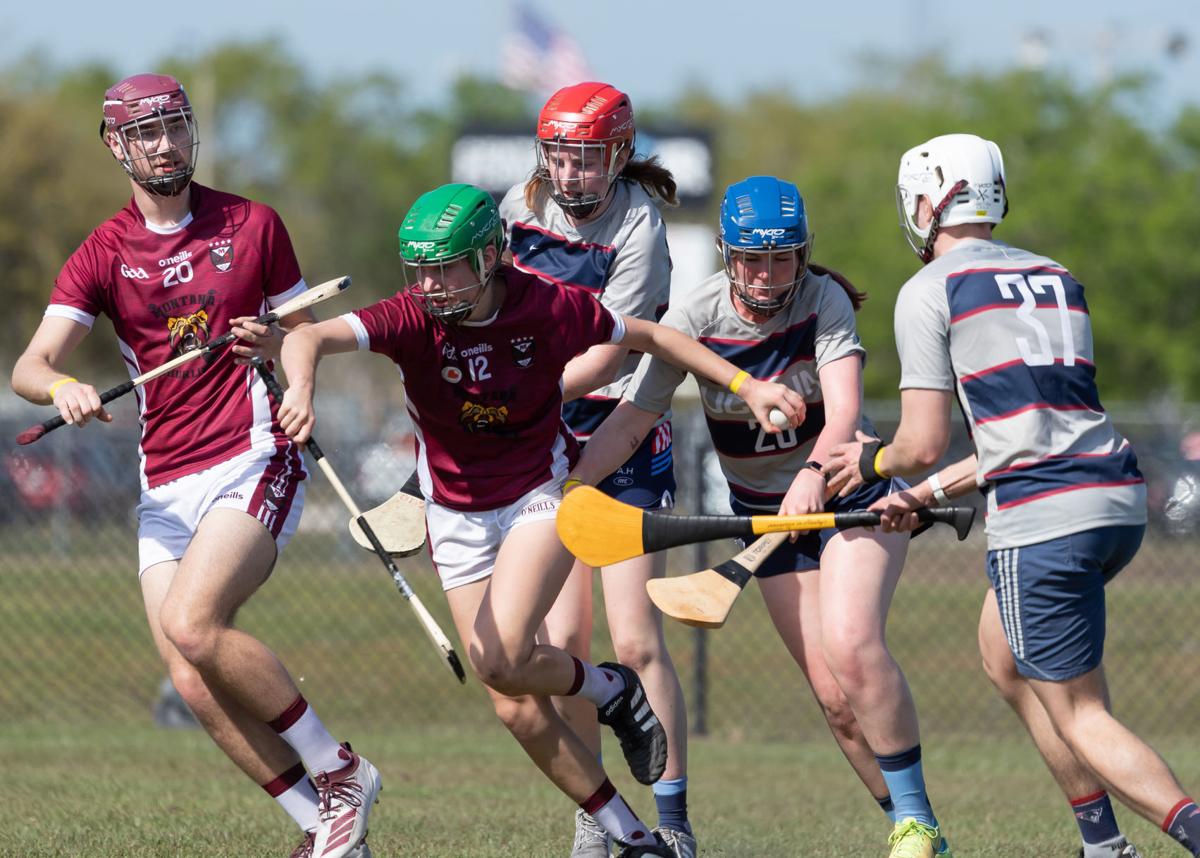 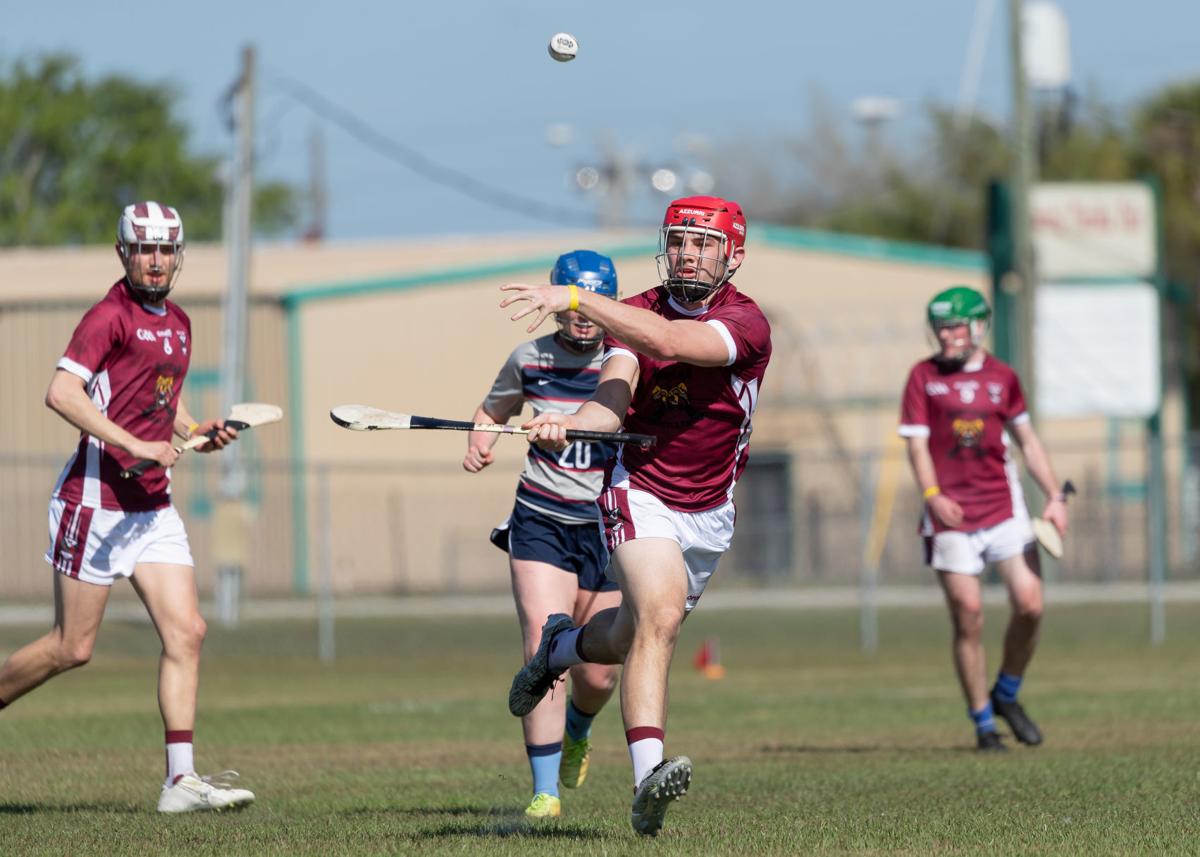 The University of Montana co-ed hurling club team took second at nationals on March 14-15 in Orlando, Florida. Pictured is a Grizzly team member eyeing the ball during a match at nationals.

The University of Montana co-ed hurling club team took second at nationals on March 14-15 in Orlando, Florida. Pictured is a Grizzly team member eyeing the ball during a match at nationals.

MISSOULA — It might just be the most inconspicuous dynasty in the history of Montana Grizzly athletics.

Typically when someone talks about hurling in college, thoughts turn to that one bad night consuming too much cheap beer. But this is a different kind of hurling — much more exciting and fulfilling.

Eight days ago, Montana's co-ed hurling club team took second in the National Collegiate Gaelic Athletic Association championships in Orlando, Florida. The coronavirus scare narrowed the field from eight to four teams, and the Grizzlies beat UConn and Purdue before losing to Pitt in the title game.

"We were super pleased, proud of how well the team did with a lot of new guys who are just learning the sport this year," Montana coach Tanner Sholey said. "Everybody came together real well.

"It was hot, humid weather. Not really our element, and not having any subs was definitely not to our advantage. But everybody stuck it out."

Ideally, the Grizzlies would take 15 or 16 players to a tournament. They took 11 to Orlando.

"We always struggle a little bit with a small pool compared to our opponents," Sholey noted. "We had a strong year of recruiting but we were missing a few players."

From its small pool, the Montana hurling club has put together an amazing seven-year run. The Grizzlies have won four national titles, finished second twice and fourth once.

"It started with the Irish studies program in 2013," said Myles Maloney, a Missoulian who helps mentor the players and offers practice competition for the Grizzlies as a leader for the local Thomas Meagher (say mahr) Hurling Club adult team.

While the influence of Irish players has been important, the Thomas Meagher team has been perhaps even more integral. The group gives the Grizzlies someone to spar against, to learn from, and it's a wonderful example of locals helping out Montana athletes.

"We really feed off them for sure," said the 42-year-old Maloney, who serves as president of the Thomas Meagher squad. "Just because I don't pay tuition at UM anymore doesn't mean I don't play. I just don't play when they go to nationals."

Hurling is one of the oldest field games in the world, dating back 3,000 years in Ireland. Some describe it as baseball on the run or hockey in the air.

The tools of the trade are a stick (hurley), a ball that's similar to a baseball (sliotar) and a helmet. It's not a collision sport like football, but there is a lot of heavy shoulder-to-shoulder contact.

"You use the hurley to hit the ball through the uprights like goal posts, or down below into a goal for three points," Maloney explained.

Montana grad student Jameson Boslough didn't know much about the sport when he decided to attend a practice last semester. The first thing he noticed had nothing to do with execution or skill.

"The community of players with the club team and city team is very welcoming," he said. "I showed up one day and they said we're glad you're here. Just a welcoming environment."

Boslough played a little soccer and tennis while in high school in Helena, but he never experienced anything quite like hurling. Now he wishes he could get one more crack at nationals after his team took second.

"It's a unique sport for a lot of reasons," he said. "First, it's a really good mix of dynamic skills, hitting the ball combined with athleticism and field awareness. There's lots of different strategies with a good mix of contact and grace. Really, there's a ton of sport skills involved, baseball and soccer, tons of other things."

The Grizzly team practices three or four times a week for roughly 90 minutes. When the weather is nice, the team practices in an open area near Dornblaser Field. In the winter, the team either goes inside to the Schreiber Gymnasium on the UM campus or practices at Washington-Grizzly Stadium.

The Thomas Meagher co-ed adult team, which plays in tournaments in the Seattle and Portland areas in addition to sparring with the Grizzlies, is always looking for new members. The team practices at Fort Missoula and you can find out when it will start practicing again by going to its Facebook page.

For Sholey, hurling has become a way of life.

"As long as I'm around town, I might as well keep it going, playing and making sure they don't let the college team fall away," he said. "We were hoping to host a (sixth annual college) tourney in late April at Washington-Grizzly Stadium and that's on hold.

"We're kind of isolated for hurling here. Gonzaga has started a team, but before that the closest team was 12 hours away in Boulder, Colorado."

Chalk it up as yet another reason why Missoula, and the University of Montana, are so unique.