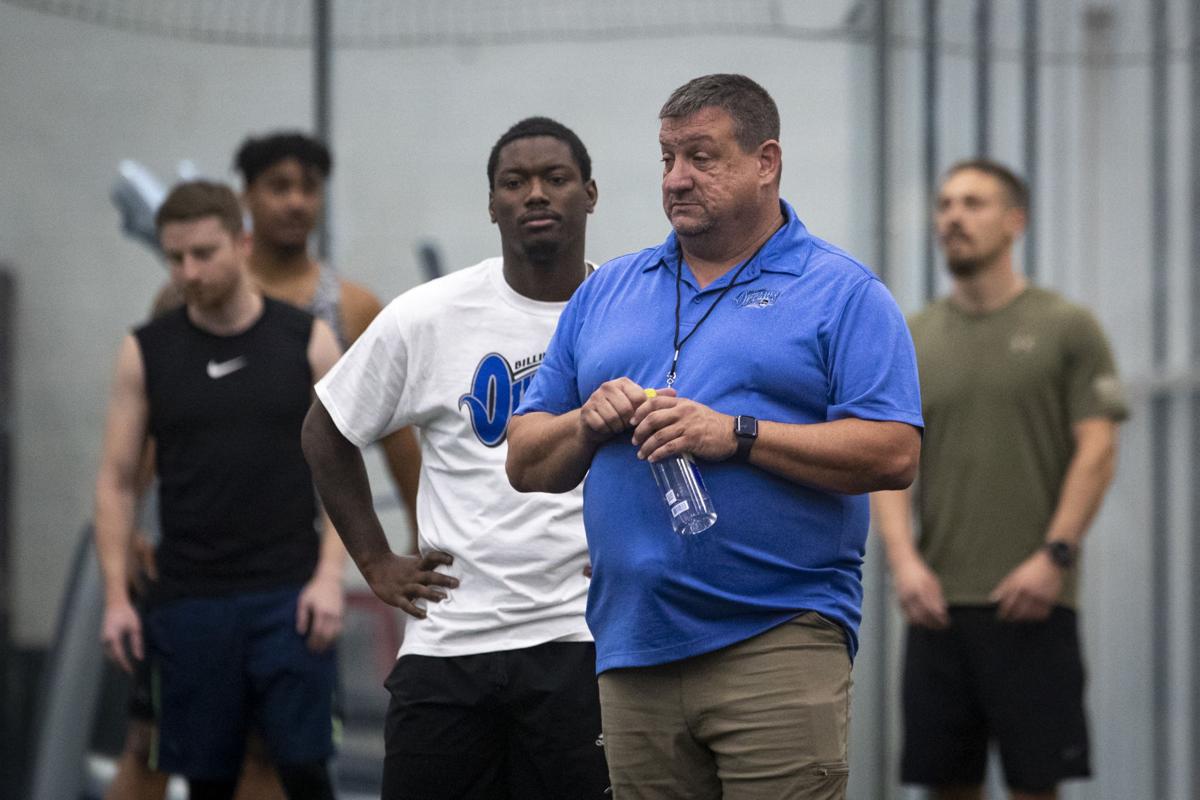 Billings Outlaws co-owner Keith Russ observes the drills during local tryouts for the team at the Sports Plex on Saturday. 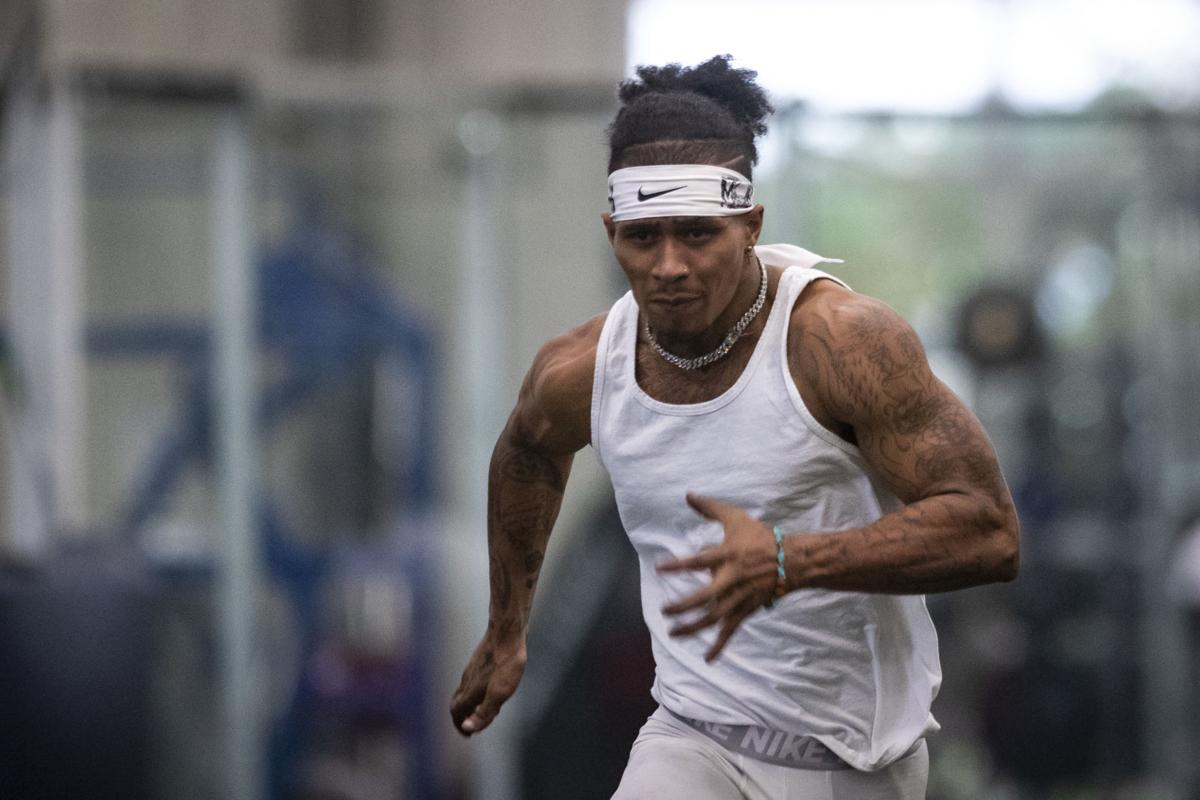 Devon Kamaka runs a sprint during local tryouts for the Billings Outlaws indoor football team at the Sports Plex on Saturday. 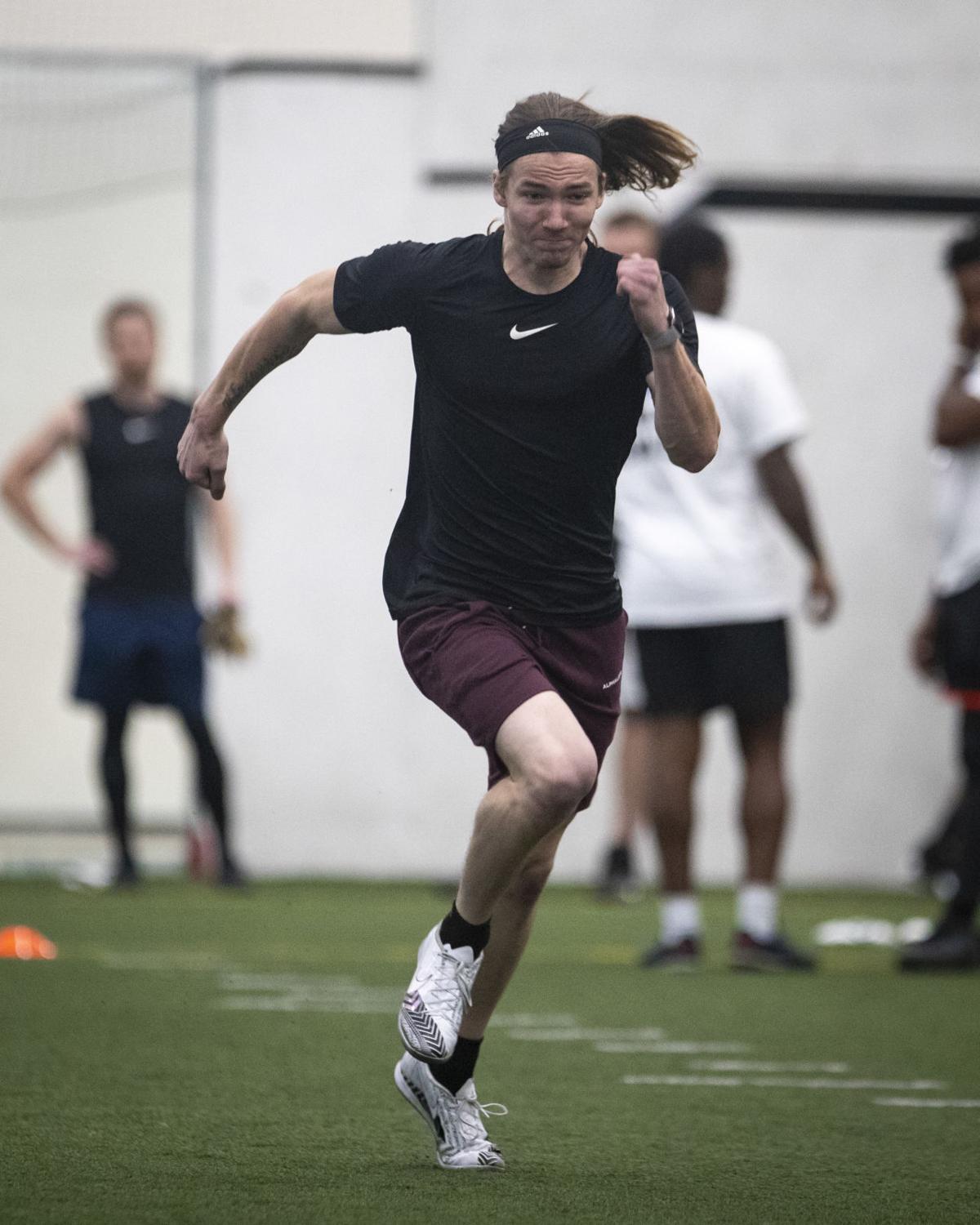 Kyle Schick runs a sprint during local tryouts for the Billings Outlaws indoor football team at the Sports Plex on Saturday.

Billings Outlaws co-owner Keith Russ observes the drills during local tryouts for the team at the Sports Plex on Saturday.

Devon Kamaka runs a sprint during local tryouts for the Billings Outlaws indoor football team at the Sports Plex on Saturday.

Kyle Schick runs a sprint during local tryouts for the Billings Outlaws indoor football team at the Sports Plex on Saturday.

BILLINGS — On a beautiful late summer day, Devonte Woods could have been at Herb Klindt Field cheering on the Rocky Mountain College Battlin’ Bears football team.

Instead, Woods and approximately 20 other aspiring indoor football players were at the Sports Plex for a local tryout for the Billings Outlaws, who will start their inaugural season this coming March and play their home games at First Interstate Arena at MetraPark.

Woods, who played defensive back for the Battlin’ Bears from 2018-19, was busy Saturday afternoon running routes, sprints and performing other drills in an effort to be invited to training camp, which will begin in early February and last two to three weeks.

Woods, who said he is on track to earn his degree in math education from RMC in the spring of 2022, said he had never played indoor football.

“It’s my first tryout actually,” he said. “It went great. I like the experience and competition and the energy of the coaches and I brought my own energy as well.”

Keith Russ, a co-owner of the Outlaws, said there were “at least seven guys we plan to bring to camp” at the tryout.

Team officials said a majority of the players had experience playing at the college level. Some had played through high school.

“We always want more numbers,” Russ said of local tryouts, “but I’m happy with the talent.”

Woods, originally from Daytona Beach, Florida, said the tryout was a “really good opportunity for me. I had a second opportunity. A lot of people don’t get that. I was able to prove to myself I am who I said I am.”

Looking for a ‘local gem’

Brock Beede, who graduated from Joliet in 2014 and was on the Montana Tech football roster for five years, now lives in Bozeman and made the commute for the tryout.

The 6-foot-5, 265-pound Beede, a defensive lineman for the Orediggers, worked his way into the starting lineup as a sophomore and appeared in 12 games that year before becoming a full-time starter in 2016.

He said “it would be pretty cool to make the team.”

Beede, who graduated from Tech in 2019, found out about tryouts through a flier and an article appearing on the 406mtsports.com website.

“A couple of my buddies were sending me the 406 article and joking about it,” he said, “and saying I’d be your agent. I thought I’d give it a shot. I’ve been out of it two years now. It feels good.”

While Beede has played in many football games, he has never attended an indoor football contest.

“I’m really new to arena football,” he said. “I remember the Outlaws when I was younger and I watched highlights after I saw the article. I’ve never been to an arena game. It seems kind of fun.”

While this Outlaws team is brand new — promotional T-shirts the team has made have a phrase on the back of saying, "Same name, new team" — there was a previous indoor team in Billings with the Outlaws nickname.

Those trying out could be male or female, but had to be at least 18 years of age. Before the tryout, the team’s chief technical officer, Rich Sickler, said officials would prefer players had college experience but it wasn’t necessary.

“We are always looking for local talent, and hopefully we’ll uncover a local gem” Sickler said earlier in the week.

One female tried out: Camilla Cleveland of Billings. Cleveland, 35, said she has a history of playing football, including with the Billings Xtreme, who played in the Rocky Mountain Football League.

“For one, I like football. I play semipro for a women’s football team in Denver,” said the defensive tackle. “I already know what to expect. I love football. It’s fun.”

LaVaughn Moore, 43, originally from Colorado but now living in Billings, was a teammate of Cleveland’s and also tried out. Moore, a defensive lineman, said he had played five years of semipro football but never had participated in the speedy indoor game.

“This would be a first for me,” he said. “It was awesome. I felt like I was getting some reps in and better than I have for a while.”

The Outlaws will play in the Champions Indoor Football league. The schedule is still being finalized but Russ said Billings will have one preseason game during the last week of February. The regular season will consist of 10 games and the playoffs will be three rounds, including the championship.

Russ and his partner Tel Koan operate Pick Six Entertainment, under which they run the Outlaws and the Wyoming Mustangs, who play their home games in Gillette. The franchise also owns the expansion Rapid City Marshals in South Dakota.

Russ said the league maximum player salary is $200 per game, along with housing, medical and meal expenses. He said the Outlaws will provide the maximum to all their players.

The team’s training camp roster will consist of 40 players. When the season begins the roster will be trimmed to 25.

On Monday, Sickler said the Outlaws would announce their head coach and coordinators after Oct. 1 and their signed players after Oct. 1. The league calendar runs from Oct. 1, 2021, to Oct. 1, 2022. On Saturday at the Sports Plex, Russ confirmed that.

Russ did say the team has signed 12 players already. He did name two of the signed players: tight end Bucky Hodges and defensive end Whitney Richardson.

Hodges was drafted by the Minnesota Vikings in the sixth round of the 2017 NFL Draft out of Virginia Tech and was cut by the team that September. According to the website Pro Football Reference, Hodges has not appeared in an NFL game and was most recently cut by the New York Jets on Oct. 2, 2019. He has been on the practice squad of the Carolina Panthers and Pittsburgh Steelers.

Richardson has not appeared in an NFL game according to Pro Football Reference, but was first signed by the Los Angeles Chargers in August 2017. While he had been on the team’s practice squad three times, Richardson’s last listed NFL transaction on the website was Sept. 2, 2018, when the Chargers cut him.

The as-of-yet named Billings team will begin competition in March of 2022 and play its games at First Interstate Arena at MetraPark.