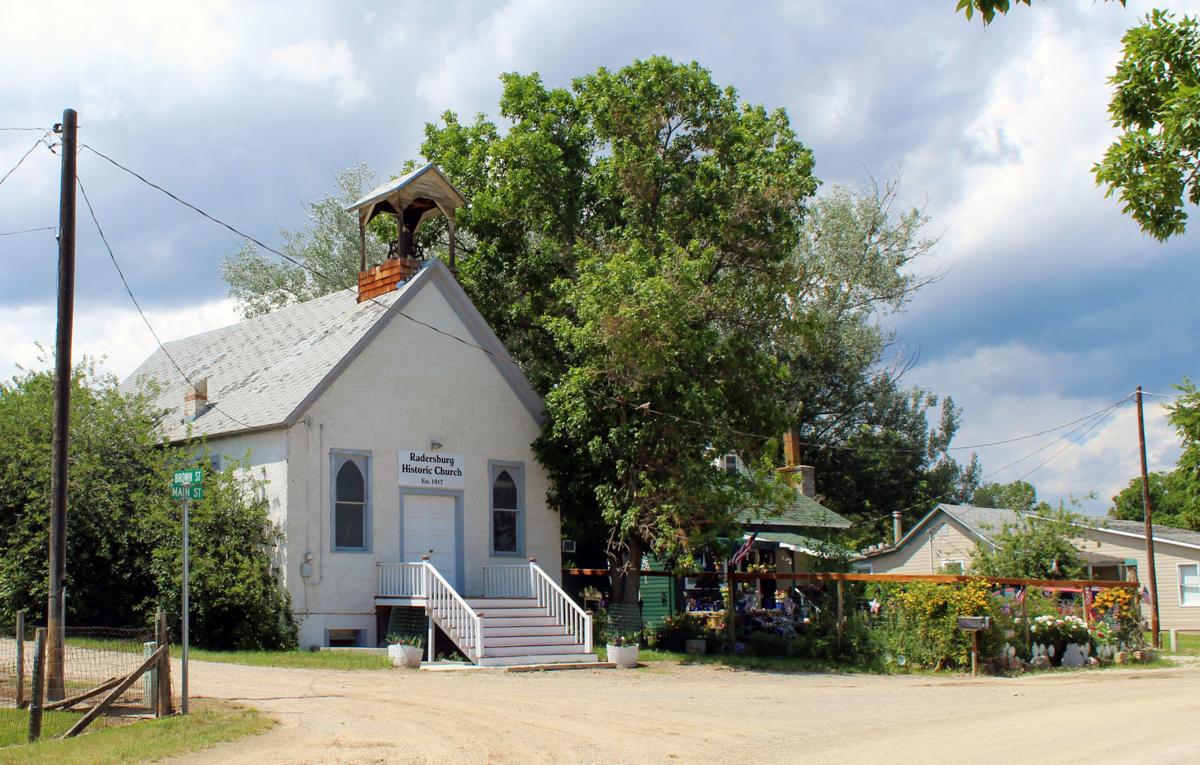 A historic church is at the heart of "downtown" Radersburg today. The little mining town once boasted 2,000 citizens -- including Cecil Elba "Larry" Duff, eventually a Major League Baseball player.

RADERSBURG — A yearlong labor of enlightenment began here on a whim, with an impromptu urge to veer off a well-traveled highway and see what remained of a once-bustling mining town that for most folks is little more than a sign — “RADERSBURG 9” — beckoning 70-mph travelers on U.S. Highway 287 between Townsend and Three Forks.

Turns out there isn’t much at the end of those nine miles of lonely pavement: A few well-manicured homes under canopies of mature trees, a 1917 church at a slight elbow in the road midtown, a restored century-old ranger station across from a schoolhouse receiving similar TLC, creaky wood remnants of a bygone Masonic Lodge and two-story hotel, and the beginning of a gravel road that rises into juniper and scrub hills before vanishing. On the eastern edge of town, a sign in Boot Hill-style lettering points toward the Radersburg Cemetery and memories of a bygone era.

You can easily walk from one end of town to the other and not see any of the 75 souls who call home gold miner Rueben Rader's 1866 creation along Crow Creek.

Poke around just a bit, though, and you’ll make some astonishing discoveries.

Myrna Loy, the “Queen of Hollywood” for appearing in more than 150 films over six decades beginning in the 1920s, was raised in Radersburg as Myrna Williams. President Ulysses S. Grant once arrived in a stagecoach and stayed overnight in one of the three hotels, back when the population was more than 2,000 and Radersburg was Montana's second-largest mining town. A local lawyer named George Cowan was among tourists captured by fleeing Nez Perce Indians in Yellowstone National Park in 1877, six weeks before Chief Joseph somberly conceded he would "fight no more forever."

A strapping 6-foot-1 lad, Duff was a right-handed pitcher and left-handed hitter who spent 16 days with the Chicago White Sox in September 1922, three years after the infamous Black Sox Scandal. His record was 1-1 and he struck out seven in a career barely longer than Moonlight Graham’s.

Duff was born in Radersburg on Nov. 20, 1896, at the end of the gold and silver boom. By then, the town had lost the Jefferson County seat to Boulder, after the Northern Pacific Railroad opted to hug the Missouri River nine miles – might as well have been 900 – to the east.

That such an accomplished athlete had come from Radersburg, of all places, set me to wondering.

What other treasures must there be from towns across Montana, large and small, thriving or shrinking? Who are the Treasure State’s other Larry Duffs?

The results are found on these pages: Montana's Greats from (nearly) every town -- 261 and counting -- from A (Absarokee) to Z (Zurich).

The initial aim was to find the Great from every community with a high school. But along the way, we discovered standouts from towns that are little more than a single dot on a dirt road -- or, in one case, Two Dot.

We think you'll marvel at Montana's mother lode of athletes and their stories.

Did you know, for instance, that a touted baseball player who would as a scout “discover” future Chicago Cubs Hall of Famer Ernie Banks was the "Pride of Plevna"?

Did you know that a 1956 Olympic boxer once featured in a Sports Illustrated story grew up in Opportunity? Or that the “Montana cowboy” who hit Muhammad Ali the hardest, knocking him to the canvas, was reared in the Bull Mountains near Musselshell?

Raise your hand if you are aware the world’s fastest human in the early 1960s – before “Bullet” Bob Hayes of Dallas Cowboys fame stole the mantle, rendering him merely "the world's fastest white man" -- was Livingston born and raised.

Pat yourself on the back if your reservoir of Montana sporting knowledge includes the first and last purveyor of college football's innovative "hidden-ball trick" of 1903: A speedy Carlisle (Pa.) Indian School lineman of Sioux descent who called Wyola home.

And how about the National Basketball Association's first legally deaf player, a dual citizen of Mexico and the U.S. whose early years were spent in a fundamentalist polygamist Mormon community in the Bitterroot Valley?

Along the way, our digging reopened our eyes to communities that once boasted Class C basketball powerhouses but have since shuttered their school's doors: Antelope, Bearcreek, Flaxville, Hogeland, Outlook and Peerless, to name a few.

Former high school stars in traditional sports dominate our selections, but we also have rodeo cowboys and cowgirls, Olympians in events from rowing to rifle to skiing, a few mushers and even a Herculean body builder once described as "the best-looking, best-built man God has ever created.”

Oh, and we even considered including a horse: Spokane, the only Montana-born thoroughbred to win the Kentucky Derby (1889). Spokane's journey to fame began in a round barn two miles north of Twin Bridges.

Many Montana legends aren't included simply because our largest cities have so many choices. Fortunately, in many cases athletes routinely associated with, say, Billings, Great Falls or Missoula actually lived in smaller communities on the fringes – think Carter, Lockwood, Huntley, Vida, St. Xavier and Bonner, among others.

To that end, if you come across a town and think we've missed the mark -- say, Chinook -- be patient.

In ultimately determining a single Great, many factors were considered: Number of sports played, levels reached, impact on the state, national or world stage, and even an "it" factor.

Simply being born in Montana was neither a qualification nor a requirement.

Legendary NBA player and coach Phil Jackson, born in Deer Lodge, was trumped by an athlete whose name has more Montana staying power. Ditto for John Lowenstein -- the only Montana native to appear in at least 1,000 Major League Baseball games -- who was born in Wolf Point but moved away as a toddler.

Simply passing through Montana didn't rank, either. For example, John Elway, the Hall of Fame quarterback, spent a portion of his childhood in Missoula but isn't regarded as a Montanan. Conversely, though Green Bay Packers Hall of Famer Jerry Kramer (spoiler alert!) only had his first six years in Montana, five in Jordan, his impact in Garfield County is lasting; a street honors his family and he named one of his sons after the town.

You'll surely marvel at much of the Montana athletic gold we've unearthed. You'll just as surely argue some of the selections.

Montana Greats is designed to be a conversation starter and a way to showcase the Treasure State's treasure trove of athletes, from thriving urban areas such as Billings, Missoula and Bozeman to nearly forgotten outposts like Radersburg.

More in Montana Greats Project (1 of 11)

The second part of our Montana Greats project features some of Montana's greatest athletes from Dagmar to Greycliff.

Looking for A (Absarokee) through C (Cut Bank)? Check out our first part.

The third part of our Montana Greats project features some of Montana's greatest athletes from Hamilton to Lustre.

Looking for A (Absarokee) through G (Great Falls)? Check out our first and second parts.

The fourth part of our Montana Greats project features some of Montana's greatest athletes from Madoc to Pryor. Don't forget to check out the first three parts for A (Absarokee) through L (Lustre).

The fifth part of our Montana Greats project features some of Montana's greatest athletes from Radersburg to Superior. Don't forget to check out the first four parts for A (Absarokee) through P (Pryor).

The final part of our Montana Greats project features some of Montana's greatest athletes from Terry to Zurich. Don't forget to check out the first five parts for A (Absarokee) through S (Superior).

From Kremlin Foxes to Outlook Blue Jays, many Montana teams have gone the way of the dodo

BILLINGS — Reading through basketball stories in the sports pages of old Montana newspapers, one is likely to find more than a few names of te…