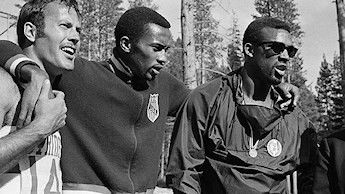 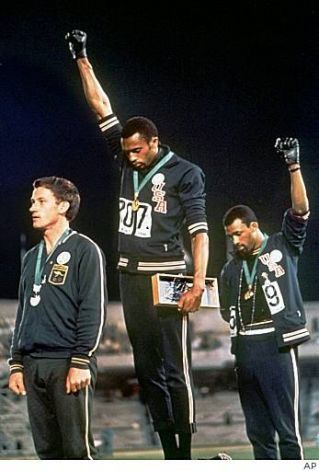 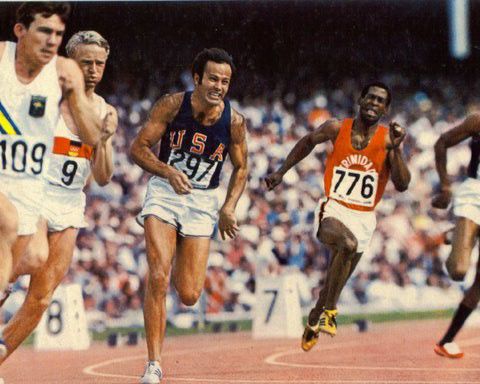 Editor's note: Tuesday was the 50th anniversary of the night when sprinters John Carlos and Tommie Smith raised fists with black gloves during the medal ceremony for the 200 meters at the 1968 Mexico City Olympic Games. The third sprinter on the U.S. team in that race was Livingston's Larry Questad -- once dubbed the fastest white man in the world. Questad, now 75 and living in Boise, Idaho, was interviewed about that night and other topics for the Billings Gazette in September 2014.

BOZEMAN —Only once, in all those years when he was regarded as the fastest white man on Earth, did Larry Questad ever view the world through a racially tinted lens.

Mexico City, 1968. Questad, seven years removed from graduating from Park High School in Livingston, was unwinding after finishing sixth in the 200-meter sprint in a Summer Olympics best known to that point for Bob Beaman’s other-worldly long jump, the Fosbury Flop high jump and Jimmy Hines breaking the 10-second barrier in the 100 meters.

Questad had found his seat 15 rows above the track at Estadio Olimpico Universitario, giving him a VIP view of the medal stand where Olympic officials would soon place gold and bronze medals around the necks of U.S. teammates Tommie Smith and John Carlos after the fastest 200 ever.

It had been a tumultuous year, of course. The assassinations of Martin Luther King and Robert F. Kennedy had fueled racial unrest nationwide. Murmurs of some form of protest had even permeated the Mexico City Games, fueled by the omnipresence of provocative California-Berkeley sociologist Harry Edwards.

Such thoughts seemed far away at that moment for Questad, who as he sat down was reliving a disappointing race, mentally preparing for relay qualifying the next morning, and thinking about his new life in the corporate world after the Games. The third-fastest American only remembers thinking it odd that Smith and Carlos had emerged from the stadium tunnel wearing black socks and single black gloves, Smith on his right hand and Carlos on his left.

But nothing could fully prepare him for happened next — a surreal moment that lives in Olympic infamy and an event that Questad, now retired and living in Boise, Idaho, hasn’t fully reconciled.

As the Star-Spangled Banner began, Smith and Carlos bowed their heads and thrust their gloved fists toward the morning sky in a human-rights gesture viewed worldwide as a black-power salute.

“It was horrible, an embarrassment for everybody,” he said.

He was at least as hurt as he was angry. He had trained and traveled, won and lost, sweating blood and tears for years, with both Smith and Carlos. Yet never once did they or any other sprinter on the U.S. team approach him for his perspective — for the lone white man’s perspective.

“I find it a very strange thing,” Questad said in a phone interview. “I was the only white sprinter, and I thought they would’ve sought me out. They might find out there was a difference of opinion of what was going on. For some reason, nobody ever did. I was the wrong color.”

Until then, Questad had been color blind, even if it was obvious that he was unique among the world’s greatest stable of sprinters.

Never did he see himself as an extraordinarily fast white man. He was simply fast, a sprinter who was less interested in the startling times in compiled while running the 100 and 200 in both yards and meters than he was in simply winning.

“I think I was lucky that I had some natural talents,” he said.

Those natural talents were evident from Questad’s youngest days in Livingston, where he grew up playing baseball in the summer, football in the fall, basketball in the winter and ran track in the spring. His 9.6 in the 100-yard dash was a state record that is believed to still stand; his name was purged from the Montana High School Association record books when the sport switched from yards to meters — a slight that has moved him many times to pick up paper and pen to write a letter, only to stop short.

“That’s just not right,” he said, noting that he was state champion in the 100, 200 and low hurdles three times in each event. “I just think I should be there.”

Questad’s exploits earned him athletic scholarships to numerous schools, mostly for football. His sprinting earned him invitations to compete in Amateur Athletic Union meets against the country’s best, where he quickly discovered he was usually fastest. And his academic prowess earned the attention of some of the finest universities, including Stanford.

He chose an academic scholarship to Stanford, he said, not wanting the pressure to perform as an athlete.

Under the tutelage of famed Stanford track coach Payton Jordan, Questad blossomed. He was NCAA champion in the 100 as a sophomore. He won both events at the World Games in Helsinki in 1963 and did the same that summer at the World Communist Games in Moscow, where he was one of three Americans invited because of the friendship between Jordan and the Soviet coach.

For much of the mid-1960s, the small-town kid from Livingston was ranked among the top two to five sprinters in the world.

Even more memorable than the Smith-Carlos incident was Questad’s experience in Cold War Moscow. He and two Stanford teammates were the only Americans in a stadium where he remembers a throng of more than 90,000 “drinking vodka and eating fish.”

They ate and drank with the Soviets and other Eastern Bloc athletes in a hall where Soviet Premier Nikita Khruschev spoke.

“And then I had the audacity to beat them,” he recalled with a laugh.

He returned days later to be the grand marshal in Livingston’s Fourth of July Rodeo parade. He still has the giant crystal, gold and silver bowl for earning the outstanding performer award.

As with the 1968 Olympics, he viewed the event as merely a sporting event. He paid little attention to politics.

“Athletes were athletes,” he said. “We were friends. We shook hands and hugged each other. It was a beautiful way of melting the Iron Curtain.”

By then, Questad was poised for the 1964 Summer Olympics in Tokyo. That year, one man had emerged as faster: “Bullet” Bob Hayes, who set world records with a 9.2 and then a 9.1, and would later play for the Dallas Cowboys. Questad was at 9.3.

“The only person I knew was faster than me was Bob Hayes, and I’d been pretty close to his hip pocket,” he said.

Questad was certain he’d medal. But at the Olympic Trials, he pulled a muscle. He began contemplating life away from track.

“It is what it is,” he says now of the disappointment.

Questad graduated from Stanford with an engineering degree in 1965 and enrolled a year later at the University of Southern California to pursue a Master’s degree in business administration. There, with the L.A. Striders club in his backyard, the competitive juices flowed again.

The Striders gave him permission to train with them. That old feeling came back to his legs.

“I basically called up my parents in Livingston and said, ‘I want you to know you need to get your tickets to Mexico,’ ” he said. “Fortunately, they listened.”

For two years, while earning his MBA, his only other focus was Mexico City. He put a 3x5 poster for the Games on his bathroom door, where he’d be reminded of his mission daily.

By then, of the top 20 sprinters in the world, 18 were Americans.

Questad made the team. The rest is well-known history.

He remembers the rumors about a protest and off-handedly telling teammates that the Olympics weren’t the time or place. He recalls seeing Edwards holed up with athletes and not liking the vibe.

“Therein lies the spark that got all this going,” he said. “He was the one around gossiping, and you’d see a couple sprinters sitting on a bench with him talking and in very animated discussions. But I was really trying to get away from everybody. I wanted to be by myself and do the mental gymnastics you do before you go into a competition like that.”

Questad said that he has attended 1968 reunions periodically and sees both Smith and Carlos. Time has healed some wounds. He says if he saw Smith they’d probably hug; he’s not as certain about Carlos.

Questad retired from track after Mexico City and went to work for IBM in Boise. In 1994, he took early retirement and then a year later purchased a company called Superior Steel Products Inc., in Caldwell, Idaho, which makes storage and transportation tanks.

He sold the company to his sons, Christian and P.L., the latter a Montana State graduate, in 2011.

Questad periodically returns to visit childhood friends in Bozeman and Livingston, though not as much as he’d like. To keep his heart close, he has an oil painting of Livingston prominently displayed in his Boise home.

As for Mexico City, the Smith-Carlos gestures haven’t tainted his memories. He gets misty-eyed at hearing the Olympic theme, and when he watches the opening ceremony, he doesn’t see black or white – he sees great athletes who are fortunate enough to say, like him, that they are among the best in the world at what they do.