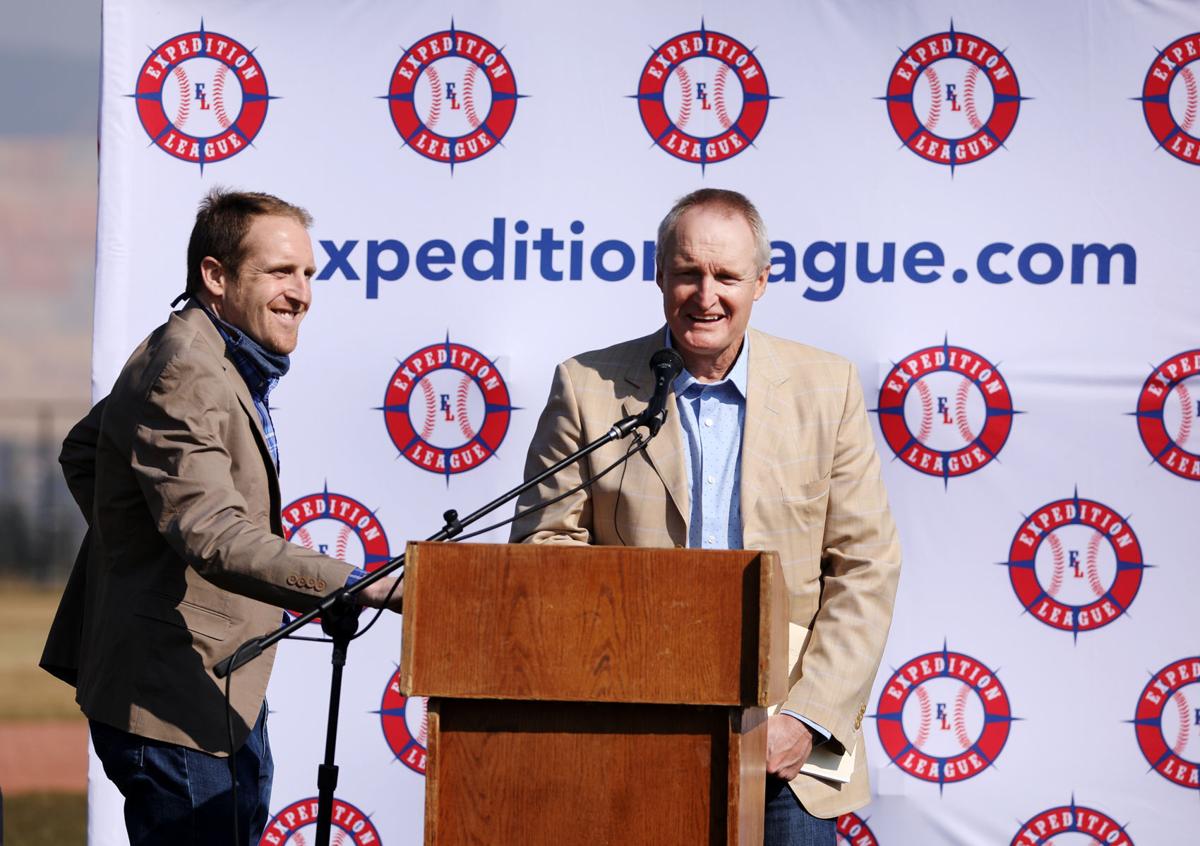 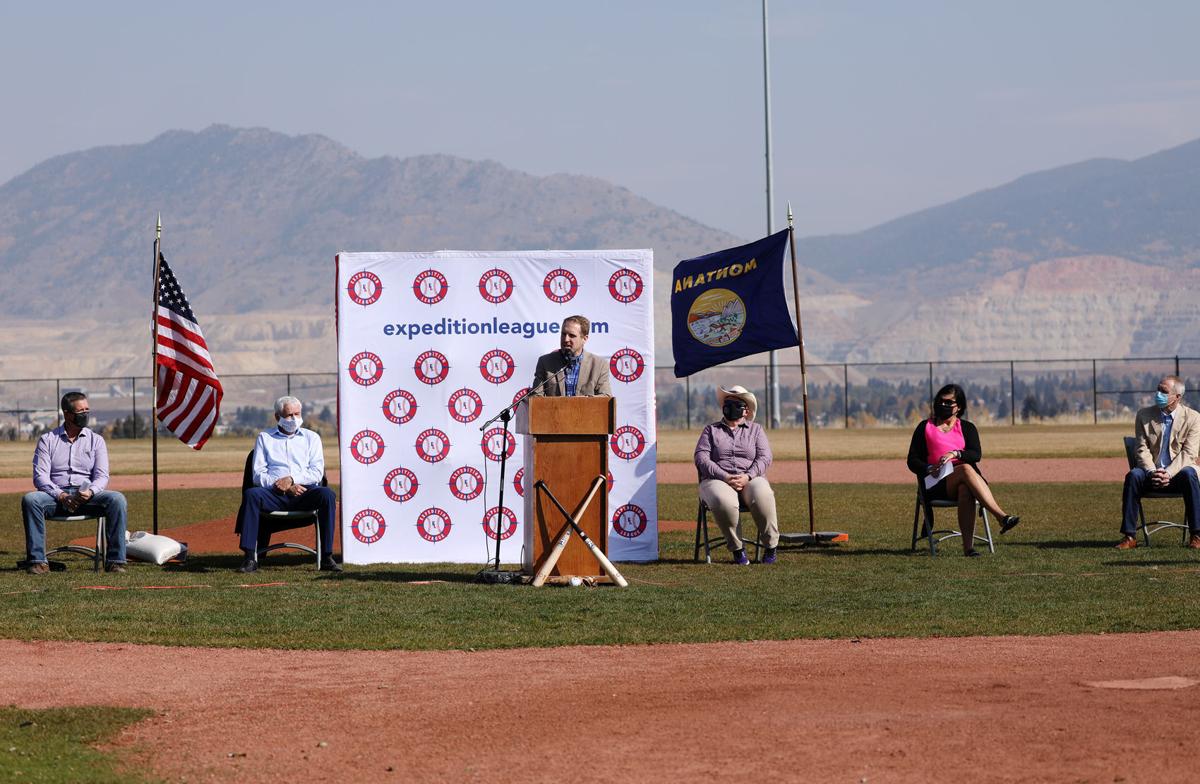 Officials with Butte Silver Bow and local business leaders gather with representatives for the Expedition League, a college baseball league that will open in May at the 3 Legends field in the Copper Mountain sports complex in Butte. 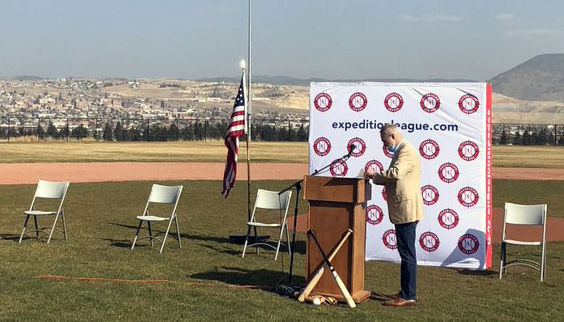 Officials with Butte Silver Bow and local business leaders gather with representatives for the Expedition League, a college baseball league that will open in May at the 3 Legends field in the Copper Mountain sports complex in Butte.

BUTTE – Summer collegiate wood-bat baseball officially arrived in Butte on Thursday, giving a community with a rich tradition in the sport its first high-level team since the departure of the Pioneer League's Copper Kings two decades ago.

Expedition League founder Steve Wagner stood on the mound at 3 Legends Stadium and pitched his excitement about his fledgling league’s first foray into Montana.

“I really consider Butte an anchor for us as we continue to expand,” said Wagner, who also revealed a vision for as many as seven teams in Montana and a few more in Wyoming and Idaho in the next few years.

The final hurdle in a 2½-year process was cleared Wednesday night, when the Butte-Silver Bow commissioners unanimously agreed to lease 3 Legends to the Expedition League team for five years at an annual cost of $12,000 for the first three and $12,800 for the last two.

With the Our Lady of the Rockies, the yawning Berkeley Pit and Butte’s historic brick downtown serving as a picturesque backdrop under tepid sunny skies, Wagner and others who championed high-level baseball’s return spoke at a lectern in front of an Expedition League banner that at one point was toppled by 3 Legends’ notorious crosswinds.

“When we can bring this level of baseball to our community we all win,” Sorini said.

The as-yet unnamed team will be sharing 3 Legends with the Butte Miners and Muckers American Legion baseball programs, which have been the only game in town since 2000. But Butte American Legion president Mark Hislop said he welcomes the new league.

“Any time we can have more games with people in the stands it is better for our community and better overall for our program in the end,” Hislop said. “I only see it making this facility and this community stronger and a greater experience.”

The opening of 3 Legends Stadium in May 2017 made it possible for the Expedition League to choose Butte. Steve Wagner visited with Parks and Recreation director J.P. Gallagher a few months later to begin the process that led to Thursday’s press conference.

In that time, Gallagher said he visited other Expedition League communities of similar size across the upper Midwest to gauge the impact. He said he was struck by Dickinson, North Dakota, a community two-thirds the size of Butte that drew several hundred spectators initially but was pushing 1,000 by this past August.

The Wagners said they envision expanding 3 Legions from a current layout with 470 stadium-style seats to a capacity of at least 1,300. Included is opening the berms behind the left- and right-field lines to people with blankets or lawn chairs, VIP seating between the dugouts and backstop, grandstands and a “party deck” beyond the left-field fence.

They also see concerts, festivals and other community activities when the team isn’t in town for its 32 home games from May to August.

Steve Wagner said he could have a commitment from a coach as early as Thursday night. That first hire will use his connections across the college baseball landscape to build a team of 30 players – including about 18 pitchers – to be in place before the new year.

“We have baseball players from all the way across the United States,” Dane Wagner said. “One way I like to explain it is this is a college all-star game 64 times a year. These are top-level college baseball players.”

Said Steve Wagner, a Minnesota native who began putting his Expedition League dream on paper in 2014: “I’m excited for the first kid that comes through here and plays and ultimately makes it to Major League Baseball. It’s neat to see that.”

Wagner said he also envisions Expedition League teams in Helena, Bozeman-Belgrade and perhaps Kalispell, along with the Pioneer League communities of Billings, Missoula and Great Falls, pending the outcome of talks between Major League Baseball, Minor League Baseball and the Pioneer's current owners.

But for now, the focus is on Butte and the many necessary steps toward the first pitch in seven months.

The team is asking residents to vote for a mascot name at the Expedition League website, with the winner to be announced Oct. 15. Host families also are being sought for players and coaches.

A summer collegiate wood-bat baseball league is coming to Butte next summer, and the 3-year-old Expedition League also has bigger dreams for the Treasure State.