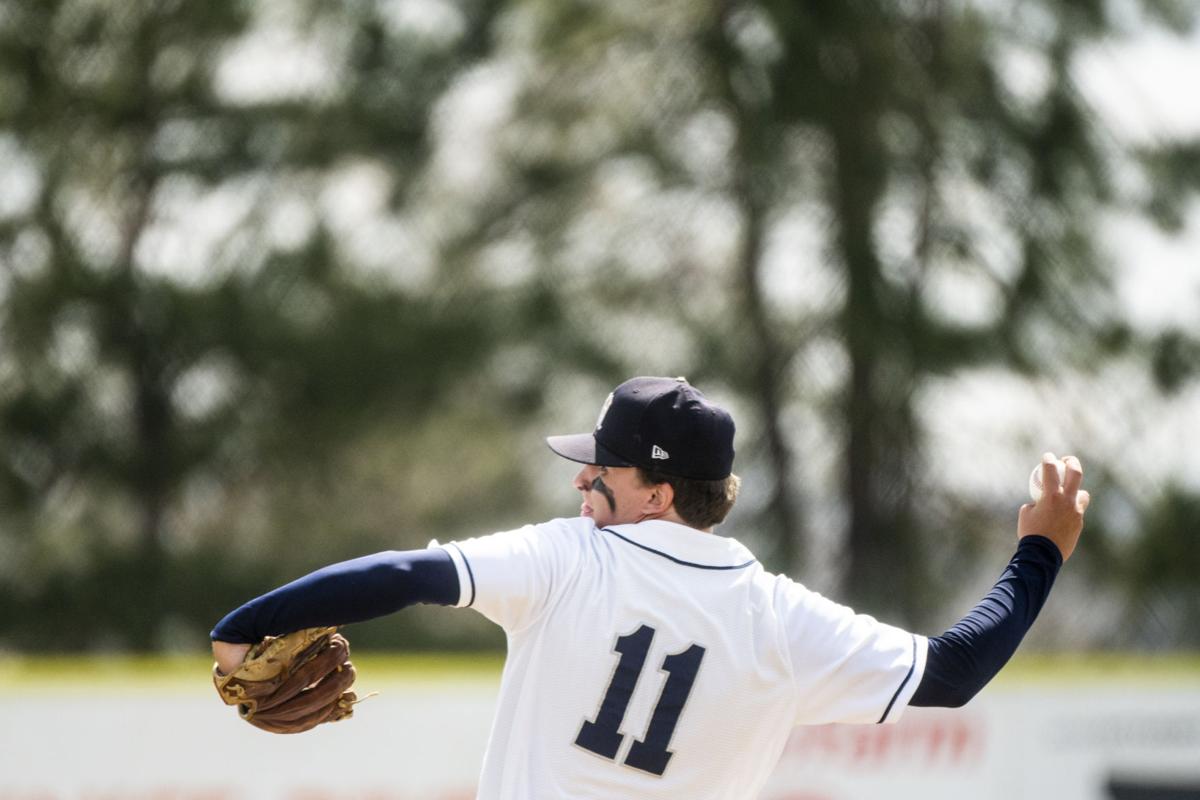 Missoula pitcher Zach Hangas delivers from the mound during their baseball game at Lindborg-Cregg Field, Sunday, April 18, 2021 in Missoula. 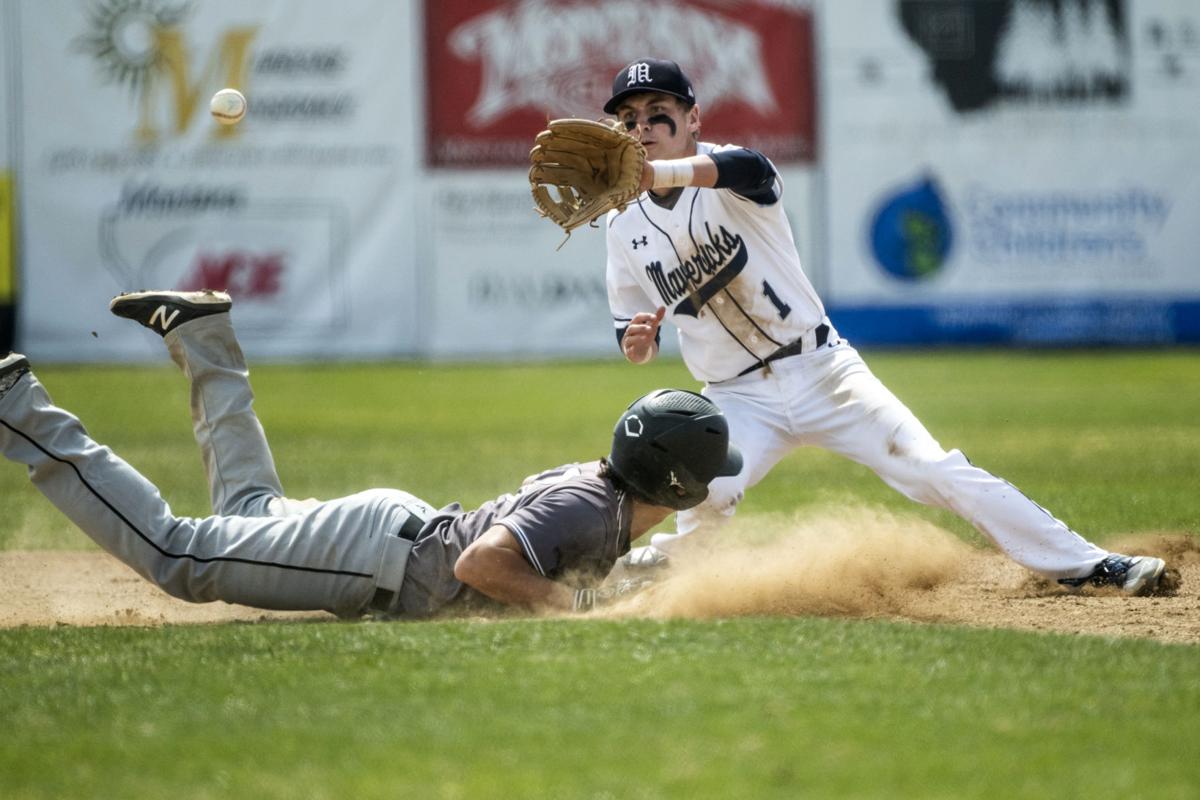 Missoula’s Dayton Bay (1) tries to tag out Glaciers' Mason Peters (8) on an attempted steal during their baseball game at Lindborg-Cregg Field, Sunday, April 18, 2021 in Missoula. The Mavericks won their first of a two-game series, 14-12. 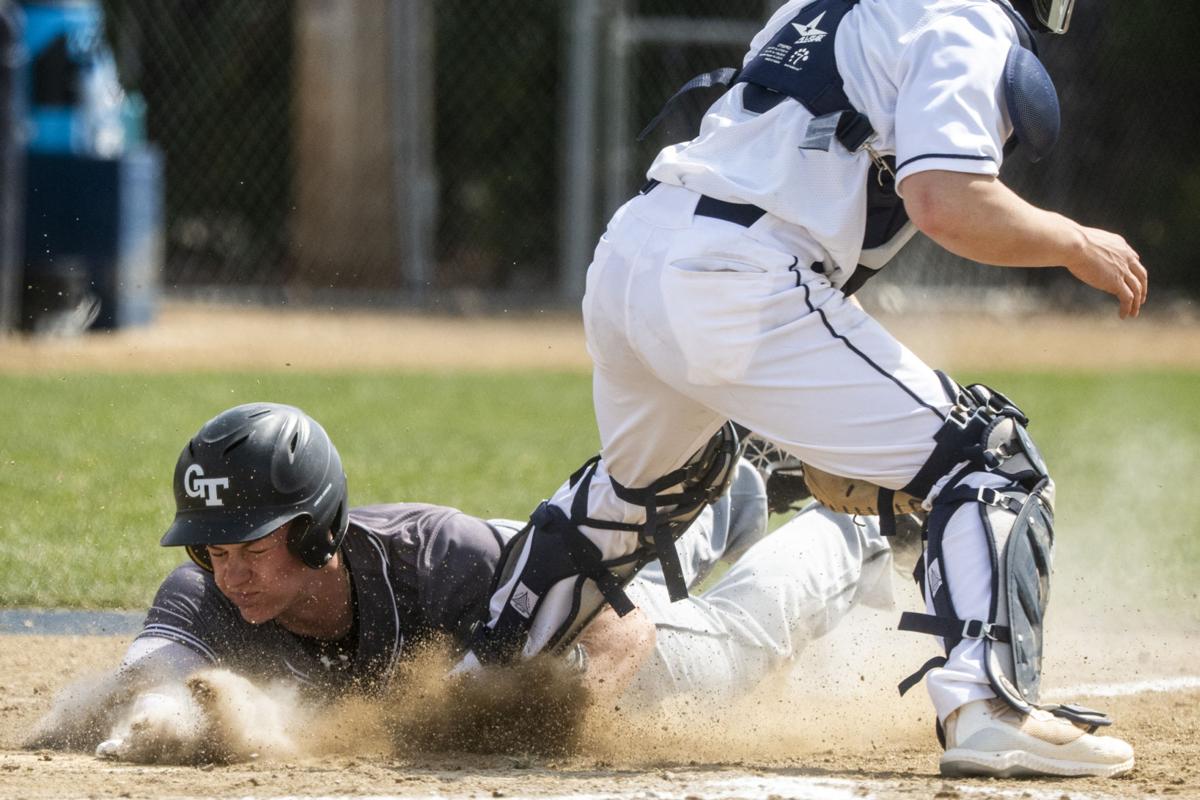 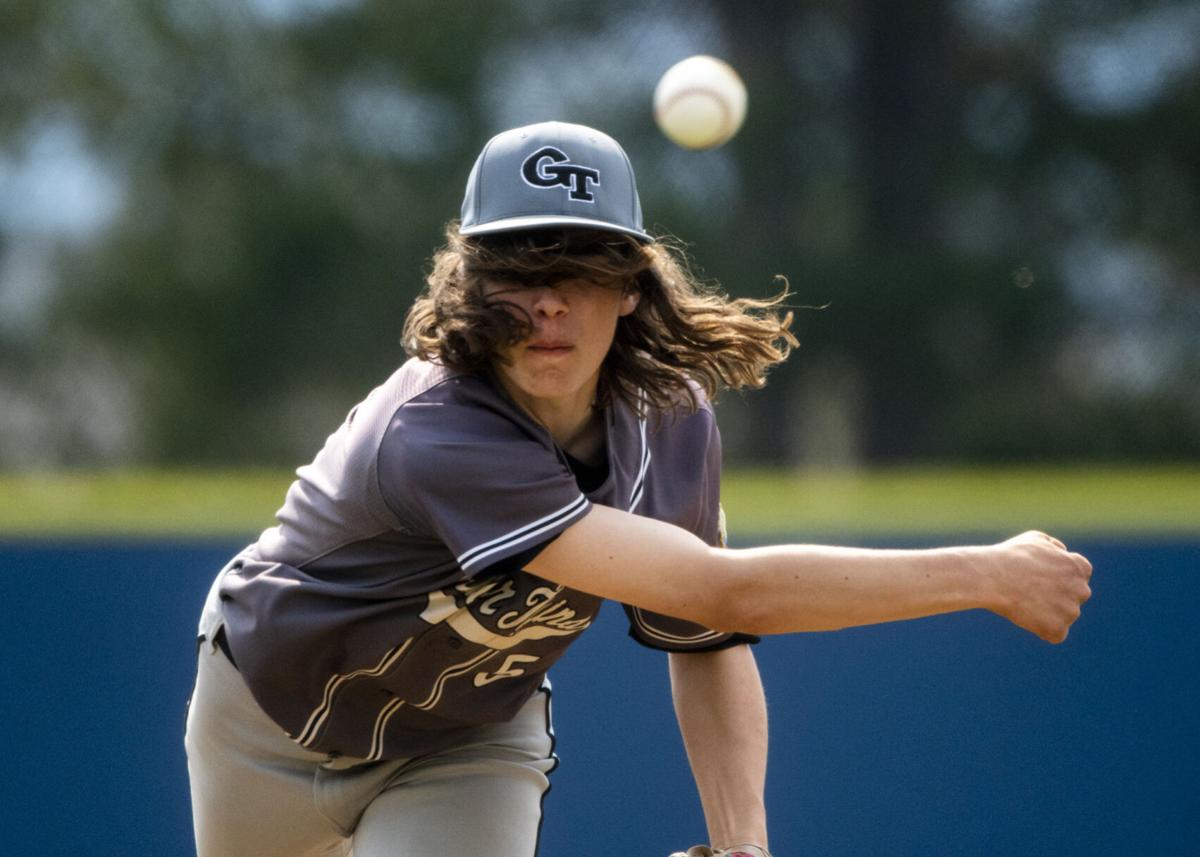 Glacier's George Robbins (5) delivers from the mound during their baseball game at Lindborg-Cregg Field, Sunday, April 18, 2021 in Missoula. 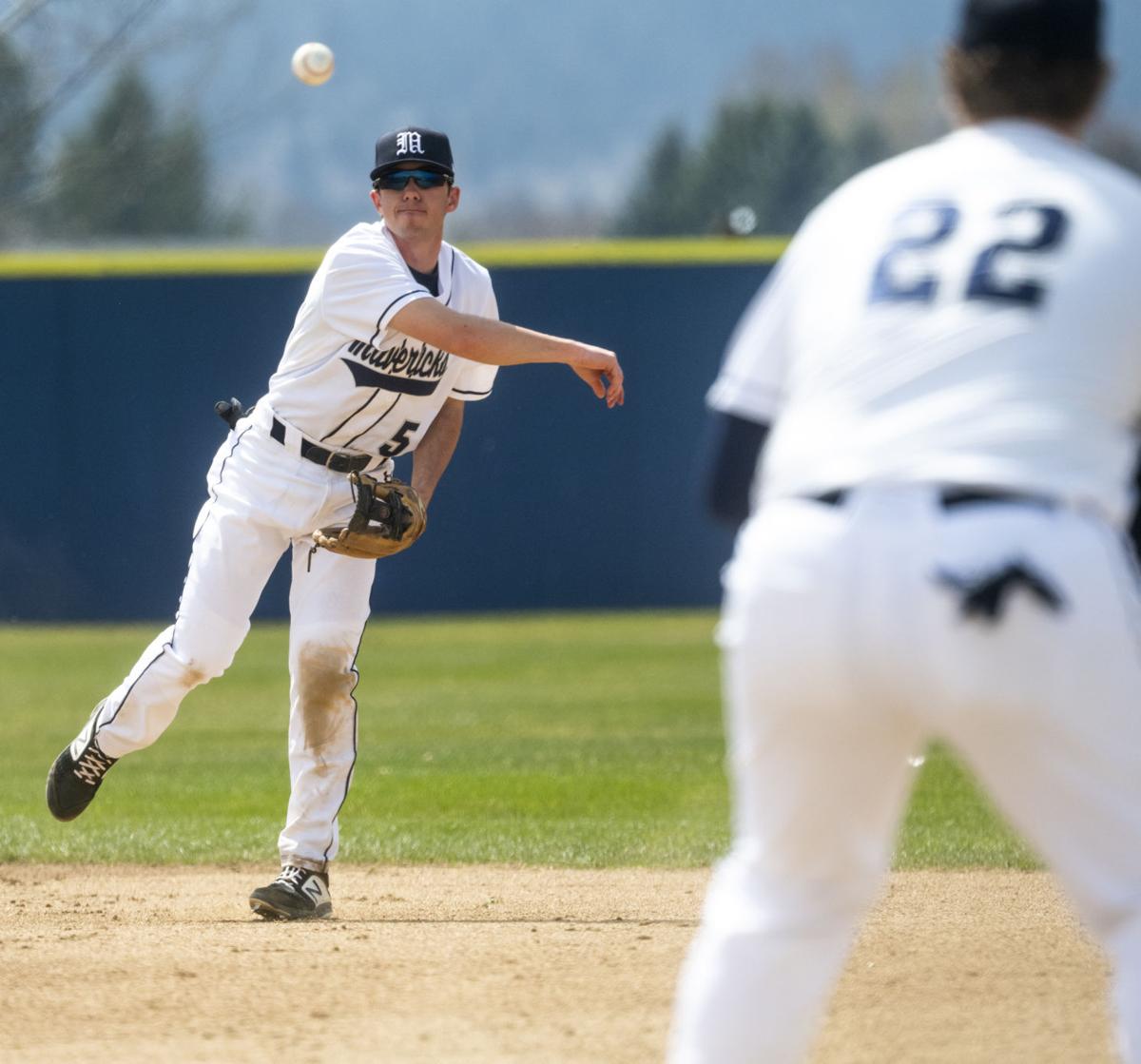 Missoula pitcher Zach Hangas delivers from the mound during their baseball game at Lindborg-Cregg Field, Sunday, April 18, 2021 in Missoula.

Missoula’s Dayton Bay (1) tries to tag out Glaciers' Mason Peters (8) on an attempted steal during their baseball game at Lindborg-Cregg Field, Sunday, April 18, 2021 in Missoula. The Mavericks won their first of a two-game series, 14-12.

Glacier's George Robbins (5) delivers from the mound during their baseball game at Lindborg-Cregg Field, Sunday, April 18, 2021 in Missoula.

MISSOULA — Perhaps no athlete in Montana has had a better year than Zach Hangas.

It’s a baseball state title that’s eluded him. And that’s the sport that he’s going to play at the next level at Cayuga Community College in Auburn, New York.

“That’s one of my biggest goals right now is to get a state championship in baseball,” Hangas said after the Missoula Mavericks, who last won a state title in 2017, split their doubleheader against the Glacier Twins on Sunday at Lindborg-Cregg Field in Missoula.

Missoula rallied for a 14-12 win in the first game and dropped a 12-11 decision in extra innings in game two as it blew a lead and came up just short in its comeback bid.

The Mavs are now 4-2 on the young season. It was their second doubleheader in two days as they split a pair against the always competitive Helena Senators on Saturday in Helena, losing 8-6 and winning 9-4. They had started the season with wins of 13-3 and 15-4 against the Great Falls Chargers last weekend.

“We’re early in the season, so we still got a lot of work to do,” Hangas said. “We’re still learning each other, how we’re going to play together. That’s the biggest thing with these games early in the season is just getting better, getting reps because at the end of the year is when we want to be playing our best baseball.”

“In the long run, when situations get tough, that adversity hits, having that experience is going to be great for us,” Hangas said. “Multiple people have won state championships and know what it takes now, so if we can just get in rhythm here soon, then we can get going.”

Hangas took a no decision in the first game of the doubleheader Sunday. He pitched three scoreless innings before he left having given up five runs on eight hits while walking two and striking out three in four innings.

The Mavs rallied with nine runs in the bottom of the sixth inning to turn a 12-5 deficit into a 14-12 lead. They had two singles, one double, five walks and three hit by pitches as they sent 14 batters to the plate and Glacier committed two errors. Kirgan had a double, a triple and three RBIs, while Jones, Gibbs and Bay had two RBIs apiece.

In game two, the Mavs lost 12-11 in extra innings as they blew a 5-2 lead when they gave up three runs in the sixth inning. Tied 5-5, they allowed three bases-loaded walks, a three-run double and a run on a double steal in the eighth inning.

Missoula battled back in the bottom of the eighth with a bases-loaded walk, a bases-loaded hit by pitch, a 3-run double by Mike Prather and an RBI triple by Andrew Claussen, all with two outs.

Prather finished with five RBIs for the Mavs, Claussen had two, while Palmer, Connor Jordan and Nick Beem had one apiece. Prather had kept the game tied 5-5 heading to the bottom of the seventh when he made a diving catch in right field for the third out to prevent the go-ahead run to score.

“As a pitcher myself, we just need to throw more strikes,” Hangas said. “Giving up 12 runs a game is not something that’s going to win it. But offensively, seeing us battle back is good to see, so we need to keep that going throughout the year.”

Former Mavs player Slade Heggen has returned to the team this season as an assistant alongside Hathaway and assistant Brian Moser.

Heggen had the opportunity to help coach after Trevor Subith left to take over as the Missoula Big Sky softball head coach. He’s just wrapping up his first year of law school at UM but couldn’t pass up the opportunity to return to the diamond for potentially one final season.

“I liked my experience with baseball, and then I was done with it, and it was abrupt,” Heggen said. “I’ve spent so much of my life doing this thing, it was my whole life when I was doing it. And then I had school. Now I got to be a human being and figure out what makes me happy as a human being, and I found that.

“Then this showed up in front of me, and I’m like, ‘This is great.’ And it is. Every time I start driving to the field after my day, I’m in a better mood the closer I get to the park. It was a little bit of ‘I might as well.’ It was served up on a platter in front of me, and I was like, ‘I’m going to do it and have a great summer.’”

High school teams didn't know how much they were going to be able to play this fall because of the pandemic. All sports were completed, and Missoula Sentinel senior Zach Hangas ended the fall with two state championships.