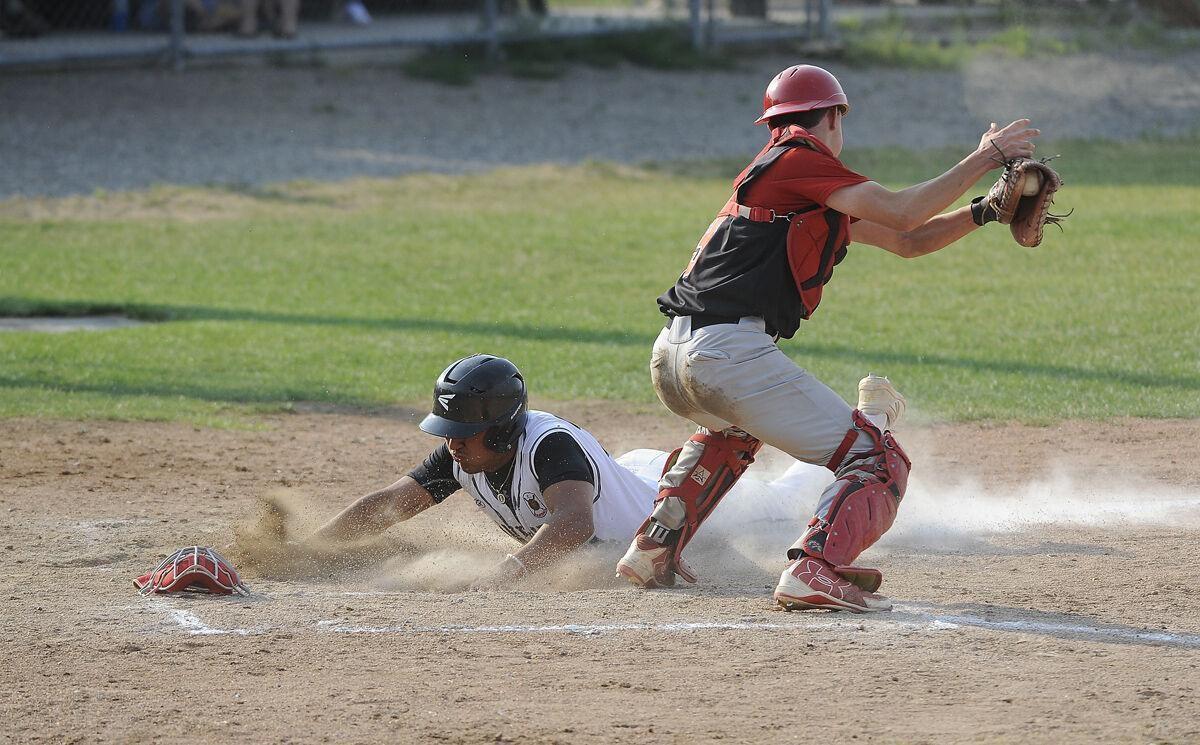 Belgrade’s Kash Fike delivers a pitch against the Reno (Nevada) Knights on June 27 at Medina Field.

Belgrade’s Keaton Carter beats the tag of Bozeman A’s Dillon Farne on a stolen base attempt Tuesday at Medina Field.

Belgrade’s Kash Fike delivers a pitch against the Reno (Nevada) Knights on June 27 at Medina Field.

Belgrade’s Keaton Carter beats the tag of Bozeman A’s Dillon Farne on a stolen base attempt Tuesday at Medina Field.

BELGRADE — The Belgrade Bandits have played this season with a certain liveliness that has vaulted them to the top of the Class A South standings by the last day of the regular season.

Their particular brand of hustle has been dubbed “4 to 6, A to B.” The saying is based on the premise that plays in the infield and outfield take about four or six seconds, respectively.

So far, that mentality has netted the Bandits a 38-17 overall record and a 13-3 mark against fellow Class A South teams. Following a pair of lopsided wins at Livingston on Thursday, Belgrade was in prime position at the top of the standings with only road doubleheaders against Helena and Anaconda left on Saturday and Sunday.

Barring disaster, the Bandits will be the top seed in the district tournament when it starts later this week in Livingston. The Bandits will have to be among the top two finishers of that tournament to advance to the state tournament in Havre the following week.

“Looking at the standings, the ball is in our court,” manager Johnny Graham said. “We kind of control where we finish, which is a good place to be. But you've got to take care of business.”

Graham is confident in his team’s chances because of how it has performed against strong competition all summer long. The Bandits spent much of April and May playing up against AA teams from around the state — Bozeman, Kalispell and Great Falls among them — and then used June to travel to non-conference tournaments around the region to see other top teams.

“Our schedule has challenged us, and that was kind of by design,” Graham said. “I think if it's handled the right way, between the ears that is, it makes you better. If it's not, it can break you, no question about that. I think we handled it pretty well.”

They have also done damage within the South division. Most recently, that included 12-3 and 24-4 wins against Livingston, which has struggled this year. The Bandits are winning games they’re supposed to win.

Much of that success can be attributed to the team’s hustle mentality.

“We don't let them get comfortable,” shortstop Lane Neill said of opposing teams.

Added Fike: “We have a lot of intensity and a lot of pace. We never take plays off, and we just try to out-hustle everything, force throws, have quality at-bats and just make plays.”

Graham, speaking on Wednesday, proved to be clairvoyant when he said he expected Fike to break out of a hitting slump as the season comes to a close.

“He's been barreling the ball all summer long and unfortunately as the sport goes sometimes the ball doesn't find green,” Graham said. “He's had more hard-hit outs than I can remember. I could see him exploding here real soon.”

It happened on Thursday against Livingston.

In the first contest, Fike hit a two-run home run in the first inning, and Neill hit a three-run homer in the seventh. In Game 2, Fike went 2 for 4 with three runs scored and five RBIs, a performance that included another two-run home run. Neill went 2 for 2 with a double, four runs scored and two runs driven in. Coby Richards drove in four runs, and Keaton Carter doubled twice, drove in a pair of runs and scored four times.

“We have a pretty good hitting lineup,” Neill said. “We can all swing pretty well.”

They can pitch well, too.

The Bandits will look to keep its string of well-rounded games intact in hopes of finishing the weekend strong and advancing through the district tournament.

“You want to start out on top going into the district tournament,” Neill said, “because it gives you that target on your back and everybody wants to beat you.”