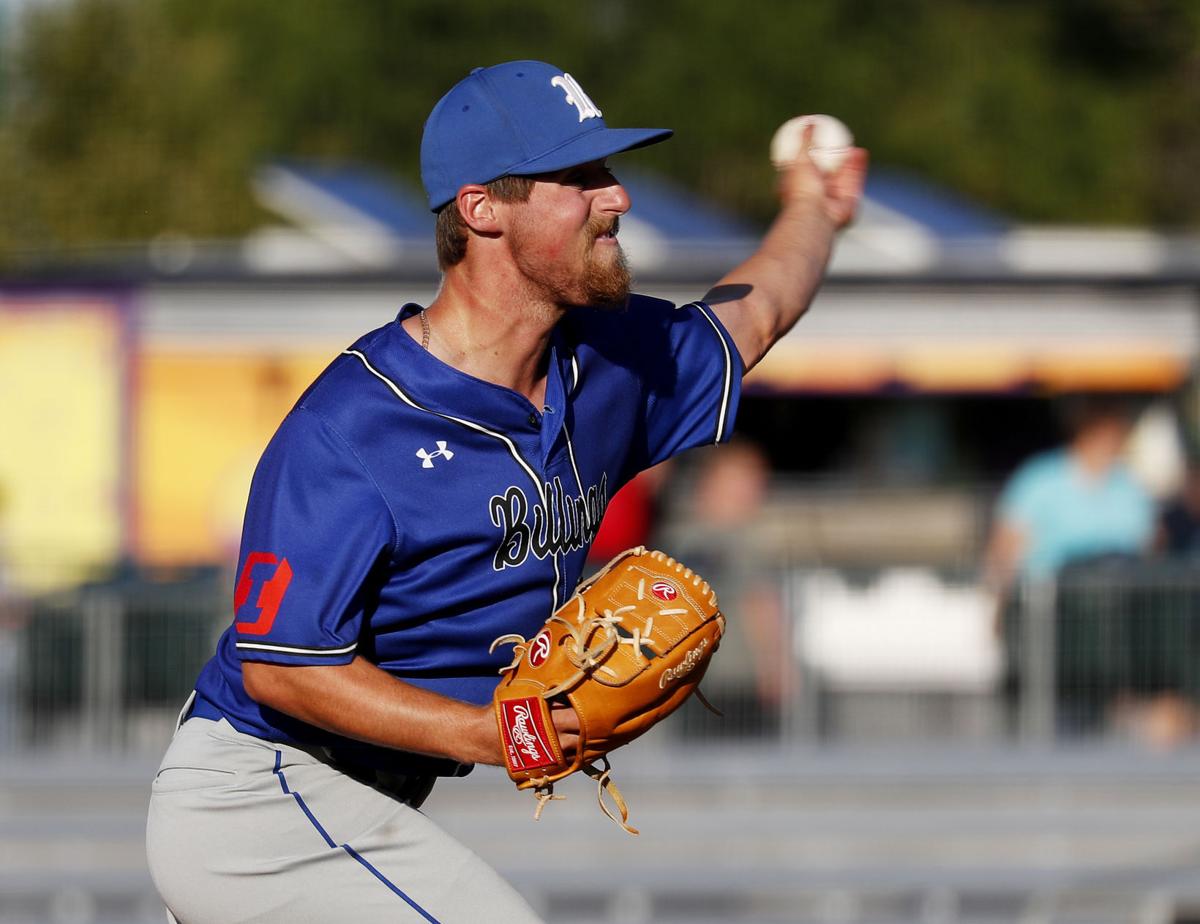 The Royals' Chase Hinckley threw the first six innings and had a three-run double in the top of the seventh in a 12-8 win over the Scarlets at Dehler Park on Tuesday. 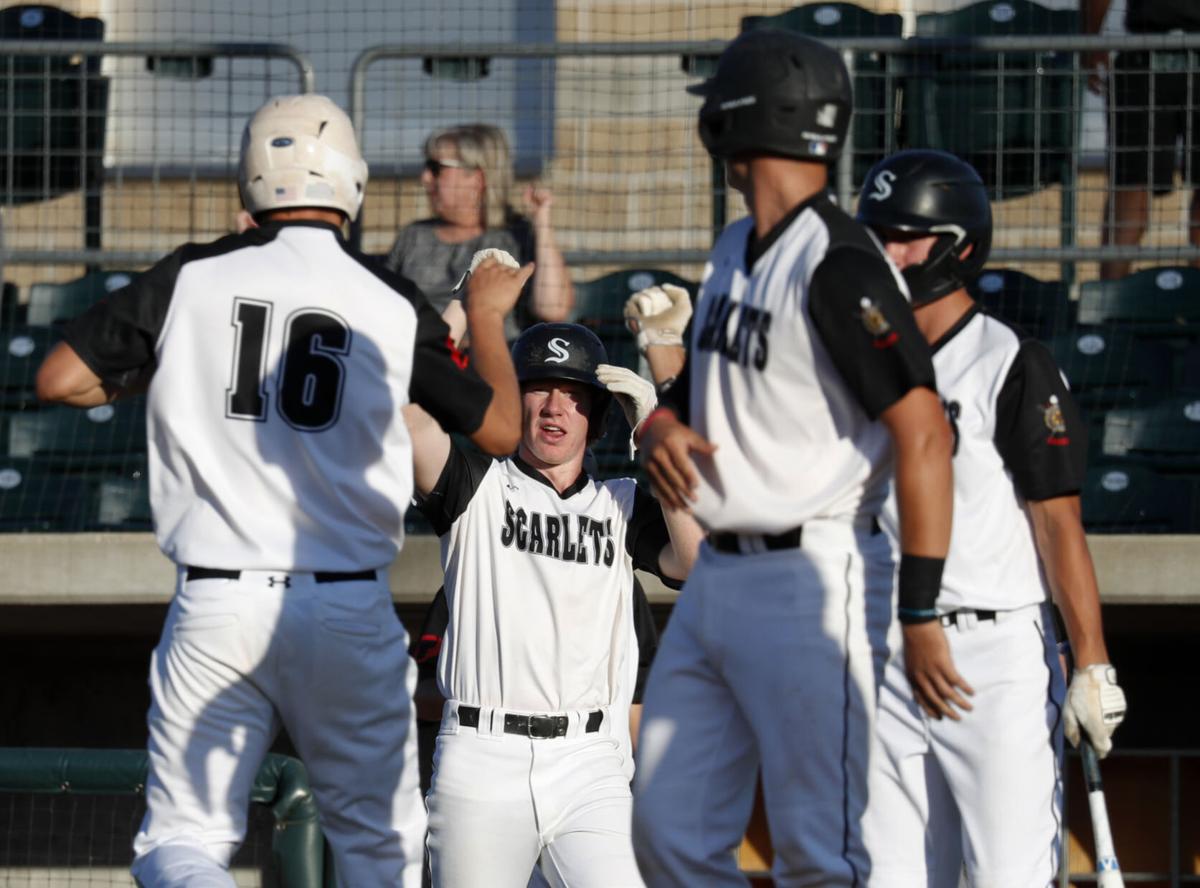 The Scarlets celebrate after two runs scored against the Royals in the first inning at Dehler Park on Tuesday.

The Royals' Chase Hinckley threw the first six innings and had a three-run double in the top of the seventh in a 12-8 win over the Scarlets at Dehler Park on Tuesday.

The Scarlets celebrate after two runs scored against the Royals in the first inning at Dehler Park on Tuesday.

BILLINGS — The Billings Royals got the “monkey off their back” on Tuesday night at Dehler Park.

In a seesaw game, the Royals bounced back from an early five-run deficit to claim a 12-8 Class AA American Legion baseball victory over the Billings Scarlets at Dehler Park.

The victory ended an 11-game losing streak for the Royals (13-24, 8-14). It also snapped the Scarlets’ two-game winning streak in the crosstown series.

“After we got to the huddle, I told the players to grab the monkey and rip it off their backs,” said Royals first-year coach David Swecker, noting the aim is now to “keep playing better baseball every day.”

Entering the seventh and final inning, the game was tied 7-7. The Royals' first five batters all reached base, starting with Brendan Miller’s single. After Noah Aufdengarten reached on an error, Bubba Bergen hit a run-scoring single to shallow center just in front of a diving fielder and the Royals led 8-7. The Scarlets then brought in Rocco Gioioso and Jaeden Jordahl hit a perfect infield bunt single to load the bases.

Chase Hinckley, who pitched the first six innings for the Royals on the hot day — the game time temperature was 91 degrees — then followed with a bases-clearing double for an 11-7 lead. Brenden Concepcion would add a RBI single in the frame as the Royals batted around for the second time in the game.

Hinckley said Jordahl’s base hit “took the pressure off me. I worked the count and got a good pitch to hit and made sure I didn’t miss.”

Hinckley finished 2 for 5 at the plate with three runs and four RBIs. He also worked the first six innings, giving up 12 hits, seven runs (four earned), and three walks while striking out two. After a rough first inning in which the Scarlets scored five runs on five hits and one Royals error, Hinckley limited the Scarlets to two more runs.

It was a different type of game than when Hinckley and Scarlets starter Jackson Schaubel pitched against each other in a 2-0 Royals win on June 19 as both pitchers went the distance.

“My teammates picked me up tonight,” said Hinckley.

And while he may not have had his best outing, Hinckley only cared after the game that the Royals beat their crosstown rivals and ended their losing streak.

“It doesn’t matter what the streak is, it’s always good beating them,” he said. “A lot of the losses on the streak, we beat ourselves and took ourselves out of the game.”

Montez relieved to start the seventh and retired the first two batters before hitting Johnny Day with a pitch. Day was plated by Logan Meyer’s double. The next batter, Jarron Wilcox, walked but Montez retired Michael Horrell on a flyout and the Royals had earned a victory.

Montez said it was the perfect time for him to start swinging the bat.

“I was feeling good,” he said. “I hadn’t been hitting too great and tonight I wanted to beat the Scarlets really bad to show out.”

The Royals had 15 hits and committed one error.

“We weren’t coming together as a team and tonight was a whole new game and we all came together,” Montez said. “And that’s why we won this game.”

“Obviously tonight our defense let us down. We didn’t make plays and it cost us,” said Scarlets coach Adam Hust. “It was a fun atmosphere tonight. People got to come out and watch baseball and these kids getting after each other.”

The Royals have now won four of six games with the Scarlets this year. The Royals won the first three games of the season series, and the Scarlets responded with two victories and had a chance to knot the series on Tuesday.

The Royals' next games are Sunday versus the Idaho Falls Post 56 Bandits, who won the American Legion World Series last year. The doubleheader will start at 11 a.m. at Pirtz Field.

“I’m just excited to see what they’ve got. It will tell us where we are at and be a good learning experience,” said Swecker. “It will be nice to play a nonconference team and fun and a good chance to play good baseball.”

“We are just going to go out and play,” Hust said of the games with the Bandits. “They are nonconference games. We’ll just come out and work as hard as we can and go forward.”

A pair of Bozeman grads and MSU golfers top the Women's State Am leaderboard after round one.