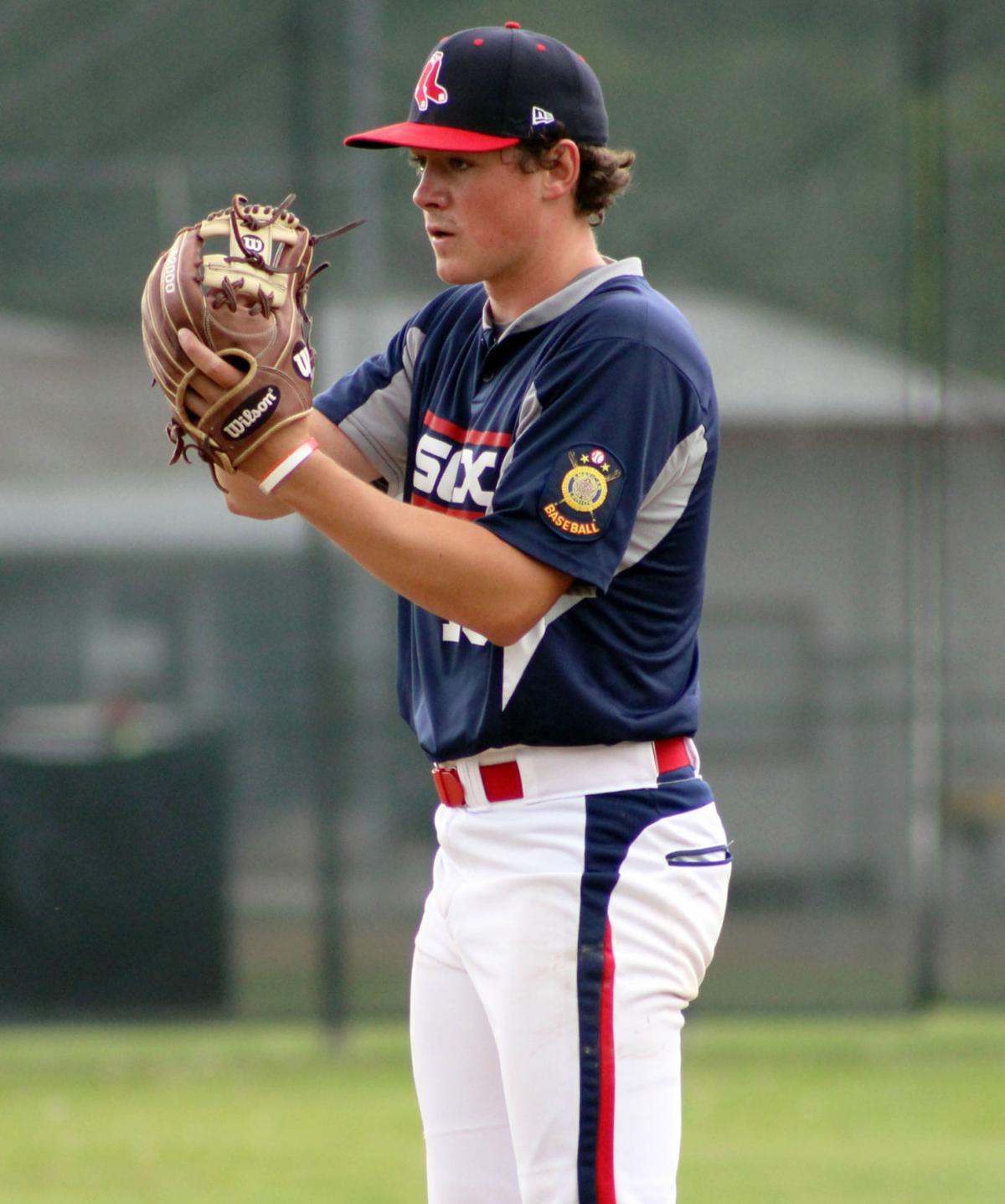 Hunter Omlid readies to deliver a pitch against the Missoula Mavericks Friday night for the Bitterroot Red Sox in Hamilton. Omlid, playing in his last game for the American Legion baseball team, scored the eventual winning run in Bitterroot's 11-10 win against the Mavericks. 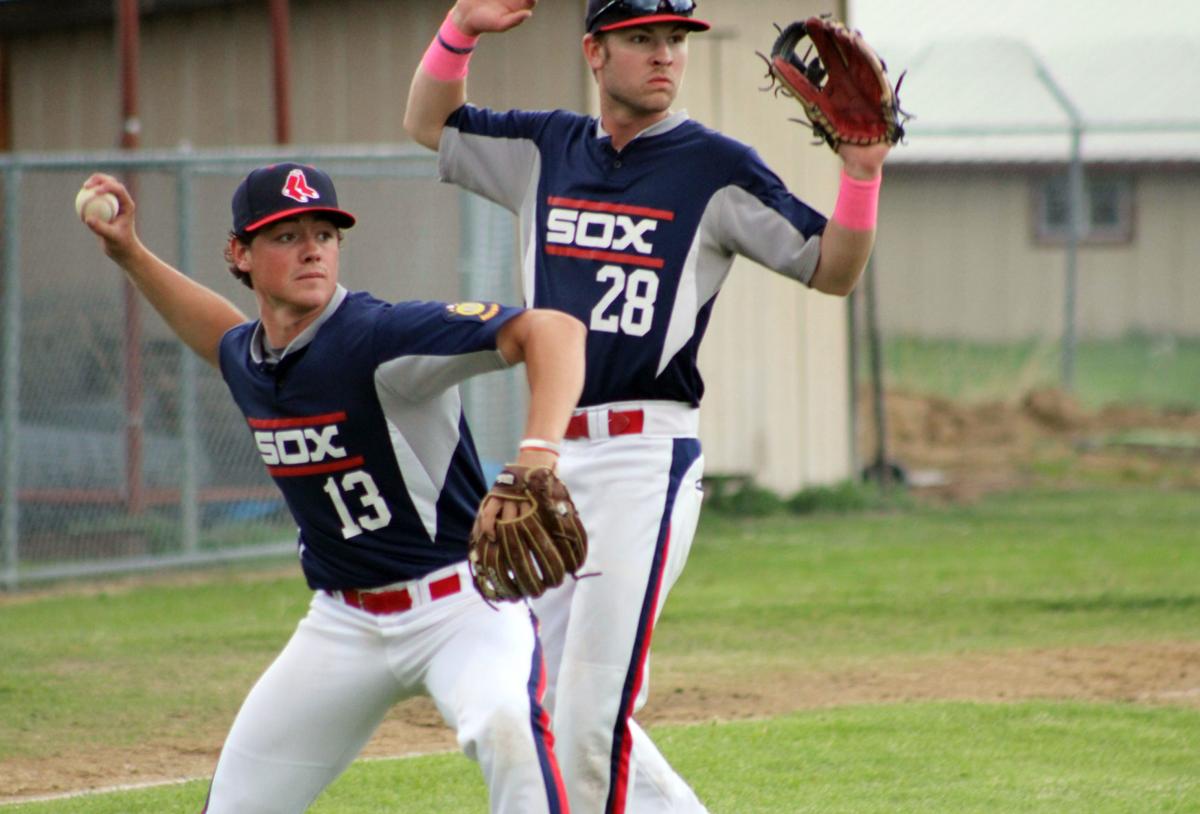 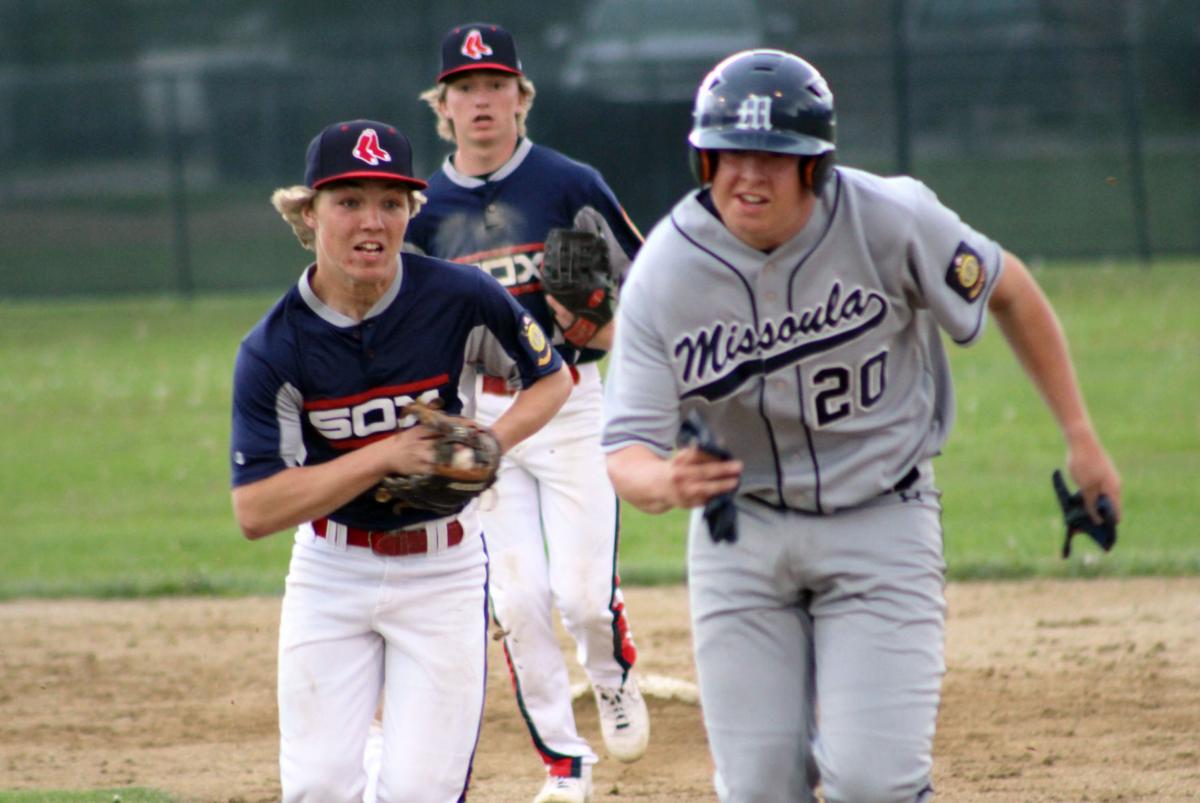 Tyler Davis (left) chases Missoula's Zach Hangas back toward first base in Hamilton on Friday.

Hunter Omlid readies to deliver a pitch against the Missoula Mavericks Friday night for the Bitterroot Red Sox in Hamilton. Omlid, playing in his last game for the American Legion baseball team, scored the eventual winning run in Bitterroot's 11-10 win against the Mavericks.

Tyler Davis (left) chases Missoula's Zach Hangas back toward first base in Hamilton on Friday.

HAMILTON — It would have been just a little too perfect — perhaps unbelievable — had Hunter Omlid come through with the go-ahead RBI for the Class A Bitterroot Red Sox in the bottom of the eighth inning of his team's eventual 11-10 American Legion baseball win Friday against the Class AA Missoula Mavericks.

On Omlid's 19th birthday, one day before his high school graduation from Hamilton and in his last at-bat with the Red Sox before he leaves for a college-prep baseball league in Canada, the Red Sox's cleanup hitter came to the plate with two on and just one out. With three runs already across the plate in the inning and first base open, the Mavericks still opted to pitch to the Boise State baseball recruit.

He got two quick strikes on him before ultimately flipping a slow roller to short. The contact didn't bring home a run, but the Mavs' shortstop couldn't throw out the hustling Omlid at first, and the defender instead opted to try to cut down Bitterroot's Tyler Davis at third base.

Everybody wound up safe, including Omlid, who smiled at first with the bases loaded and the Red Sox still threatening to take the lead.

"I wanted it bad, really bad," Omlid said about his desire to knock in the go-ahead run. "But I got down in the count and had to protect and I just did my best to get on base and that’s what happened."

The next batter, Nick Draper, instead lashed the go-ahead hit, scoring Davis and the Red Sox added another one, making it 10-8, with a pop up to right field that Missoula lost in the lights one at-bat later.

Omlid, who moved to third on the play, ultimately came around to score when Mitch Spinetta was hit by a pitch. That forced the Hamilton senior home and gave the Red Sox an 11-8 lead. It proved to be a big run, even if it almost didn't happen.

Omlid, concerned with his friend who had been hit, nearly forgot to touch home plate.

"I was kind of focused on getting his bat and making sure he was OK and I missed the plate," he said, chuckling, "But I came back and got it, so it was OK."

It's a good thing, too, as the Mavs mounted a ninth-inning rally by opening the frame with their second home run of the game — a solo shot from Dane Fraser. A walk and a Bitterroot error put Mavs on second and third, and another error at first base nearly tied the game. One run scored on the play as the ball skipped away from Draper, making it 11-10.

The first baseman recovered as action continued, though, as Draper gunned down Missoula's Stewart Long, trying to score from second base, at the plate.

Somewhat lost in the frenetic finish was the fact that Omlid's step on home plate, that almost came as an afterthought, accounted for the game-winning run.

"We played all out, we wanted to win it for Hunter," said the A-squad's first-year skipper Kallan Grenfell, whose team rallied from deficits of 7-3 in the seventh inning and 8-5 in the eight. "He’s been a huge part of the program, so you have to send out your guy on top."

Omlid has indeed been a huge presence for the Red Sox and Hamilton sports in general. The two-time all-state pitcher and third baseman has been a part of three district championships (2015, 16 and 17) and three state championships (2015, 16 and 17) for the Red Sox. He has also been a catalyst for two Northwest Class A Regional Tournament champion teams.

He's also a three-time all-state basketball player for the Broncs, and he reached the illustrious 1,000-point career scoring mark last winter for Hamilton, which qualified for the state tournament each year of Omlid's career.

"We’re going to miss him. He’s our ace, he hucks off the mound and he’s one of our best hitters on the team," said Rothie, the Red Sox leadoff hitter and fellow captain with Rothie. "We do everything together, I’ll be honest. It’s going to be hard to see him go a couple days after graduation, but we’ll for sure connect and we’ll be talking all the time he’s gone.

"But we’re all happy for him and glad he’s going to Canada and couldn’t be more proud of him."

Omlid heads North of the Border to Brandon, Manitoba, Canada for a summer-collegiate baseball league. There he'll play for the Wheat City Whiskey Jacks as part of Boise State baseball's summer training that sends players around North America to prepare for the rigors of Division-I college baseball.

But he's excited for the new challenge.

"It’s going to be really hard to leave these guys. Just getting a chance to work with these guys means a lot and I’m excited to watch them succeed," Omlid said. "I’m really grateful for everything and every one around us that helps us out.

"And getting to (end on a win) is always nice."