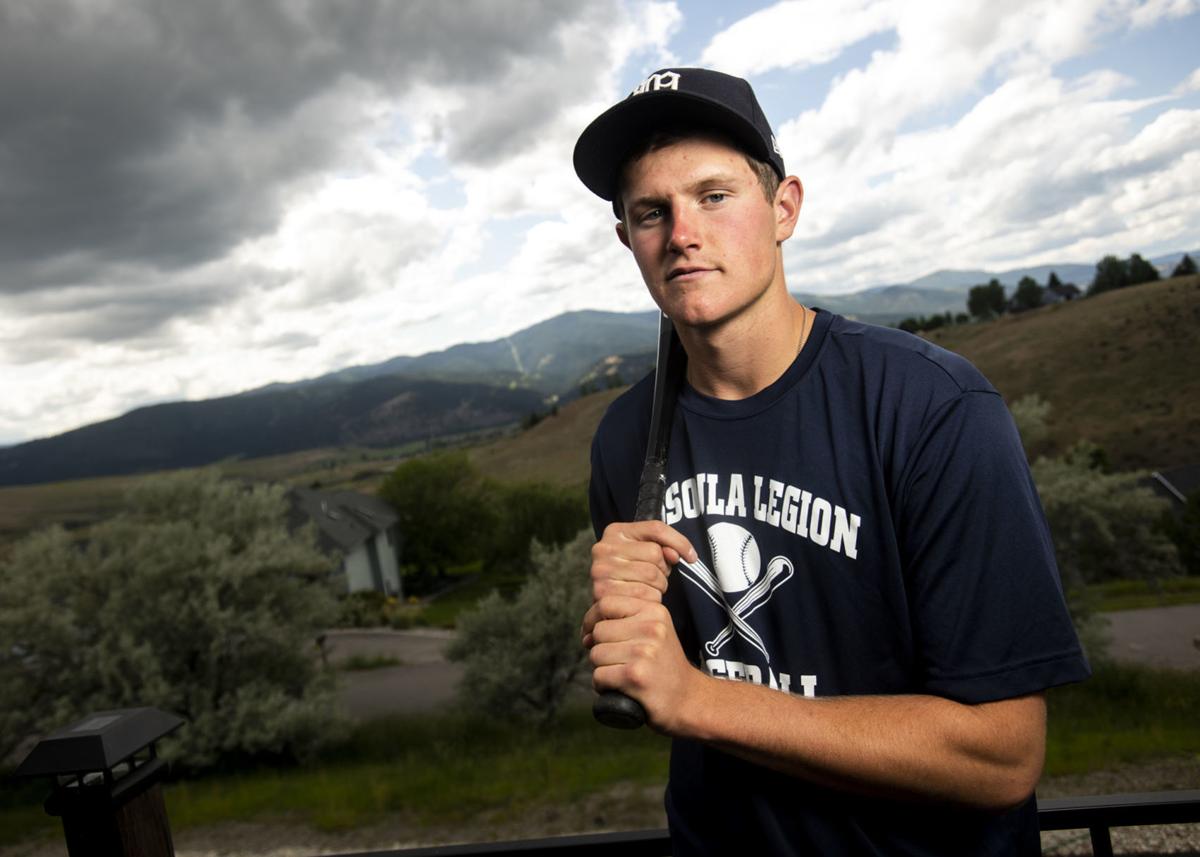 Third baseman Dane Fraser is back playing for the Missoula Mavericks this summer after his college baseball season was cut short by the coronavirus pandemic. Fraser has been a catalyst, especially at the plate. 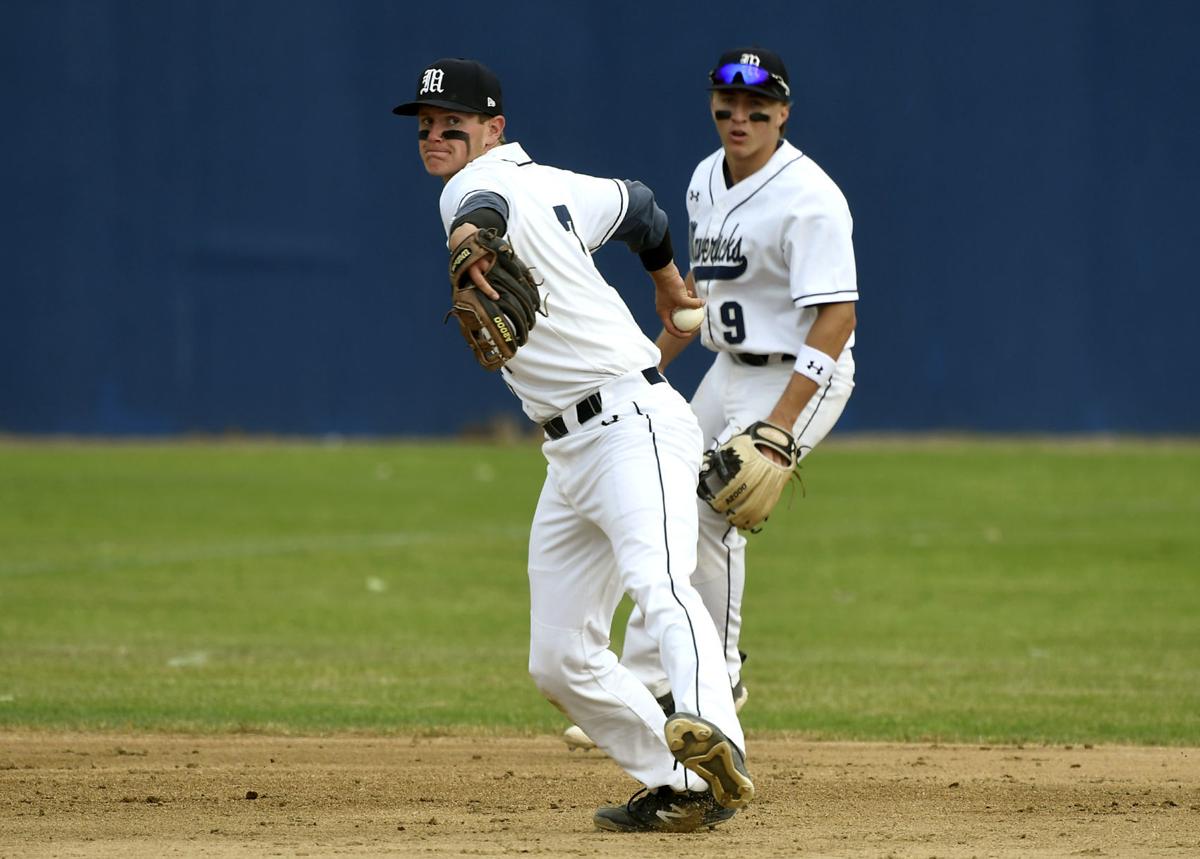 Mavericks third baseman Dane Fraser makes a throw to first base during a doubleheader against the Helena Senators earlier this season.

Third baseman Dane Fraser is back playing for the Missoula Mavericks this summer after his college baseball season was cut short by the coronavirus pandemic. Fraser has been a catalyst, especially at the plate.

Mavericks third baseman Dane Fraser makes a throw to first base during a doubleheader against the Helena Senators earlier this season.

MISSOULA — At just 18 months old, Dane Fraser already had an affinity for hitting the baseball.

As his mom, Kim, tells it, she bought him a little plastic tee and baseball to play with outside. With a small yard, the tee was set up about 10 feet from a fence.

Fraser, who now stars with the Missoula Mavericks, a team that he rejoined because his freshman season at Yakima Valley Community College was cut short due to COVID-19, spent hours with the tee.

He’d hit it, run over to the fence, pick the ball up, set up the tee, hit and then do it over and over again.

“He would do it, and never stop,” Kim Fraser said laughing around a table at their house on a beautiful Tuesday afternoon. “I kinda knew he might like baseball then.”

Dane Fraser certainly loves America’s pastime and he’s pretty dang good at it, too. His earliest memories surrounding the sport begin with his dad, Dax, simply playing catch in the back yard.

It was not long before Dax and Kim realized their son might turn into a tremendous baseball player, so they began looking for a hitting coach. When Dane was around 10, they found Pat Winterrowd. Good friends with another member of the Fraser family, Winterrowd was asked to be Dane’s coach.

Coaching in Dillon and commuting from Missoula was becoming tough, so Winterrowd thought it might be a good idea. He had no idea how right he was.

“I finally decided to hang it up and I was just working in Missoula and did it as a favor to start working with Dane,” Winterrowd said. “Next thing I know I have 100 hitting students … it just exploded.”

Winterrowd says he was booked seven days a week for years and years, but loved every second with it. He moved down to Arizona nearly three years ago. Fraser has even traveled to Arizona with his father several times to continue to work with Winterrowd.

“Pat really helped with breaking down the swing and making it short to the ball,” Fraser said. “Now it would be nice to have the touch ups here and there, but it was mostly just getting the basics down. “

He added: “I’m thankful I got to work with him.”

While Fraser is more than just an offensive threat on the diamond, it is his swing that is truly a work of art. From the early days when Winterrowd was working with Fraser, he was impressed with everything about him.

Even years later, Winterrowd remembers he immediately recognized he had the chance to be a truly great hitter because of his approach to the game. An at-bat ended how it did and that was it.

Fraser does not get into his own head and flushes each at-bat once it is done, no matter if it was a 410-foot home run or a walk or a questionable third strike.

That is rare in young hitters, Winterrowd said, and has continued to be a critical part of Fraser’s game.

“He doesn’t worry about a failure, when that at-bat’s over, he’s ready for the next one,” Winterrowd said. “He doesn’t let his mind get cluttered with junk, he’s a confident kid, so that type of hitter, that’s what you want.”

Winterrowd was also impressed with how Fraser responded to the tiny, minute adjustments that would make his swing better. Baseball is a game of inches and quarter inches, especially when hitting, and Fraser recognized this right away.

“I think baseball is about making adjustments and sometimes you just have to figure out what it is for that day,” Fraser said. “There’s times where you go out and you’re early on every single swing you don’t know why and the next day you’re late on every swing.”

While Fraser may sometimes need to figure out why he’s late or early, his motion is exactly the same time every at-bat. He also stays extremely square, a fact Winterrowd absolutely gushes about.

He even has a framed picture of Fraser swinging in his office.

“If you didn’t know who he was, you could say you could teach by that swing,” Winterrowd said. “His finish is so incredibly perfect.”

Mentally, Fraser also has the ability to take control of an at-bat against a pitcher. Some of this is simply confidence, but his rhythm and timing through his swing are immaculate, which can help shake a pitcher.

“It’s amazing, isn’t it? No hitter can do that at a college, number one, if they don’t have their mind in the right place,” Winterrowd said. “If they don’t believe in themselves. He doesn’t care if you throw it 500 miles per hour, he’s going to hit fastball. We focused when he was young and early on, we just told him you don’t let people throw you fastballs.”

When the coronavirus shut down college sports across the country, Fraser spent three days in Yakima before heading back to Missoula to finish his freshman year online.

His coaches wanted him to play in a North Dakota league with the Big Sticks in the Expedition League. He was not sure if that league was going to happen or not — it ended up running — but it was hard to say no to Brent Hathaway, the Mavericks skipper.

“It was crazy because he kept texting me and I told him no. I knew he wasn’t going to stop texting me. And then once the whole coronavirus thing and that everything might be canceled, I was like, alright this might be my shot to go back and it worked well.”

Yakima Valley, he said, is planning to go fully online in the fall so he’s not sure when he’ll be back on a college campus.

“He’s definitely a D-I player, and, honestly, the way he hits and his mentality, I’ll be surprised, I’ll be really surprised if Dane doesn’t get a chance at pro ball,” Winterrowd said. “Kids that swing like that, they’re hard to find.”

There is a kid like that in Missoula, however, and he has the brightest of futures ahead. While the COVID-19 spike may end up shuttering the reorganized Legion Baseball season early, Fraser and his family are still glad he got the chance to suit up once more for the Mavericks.

“I’m back and having a really fun time,” Fraser said. “It was a good decision.”

The Missoula Mavericks finished with a bang in the 45th annual Firecracker Tournament Sunday at Fitzgerald Stadium in Rapid City, South Dakota.