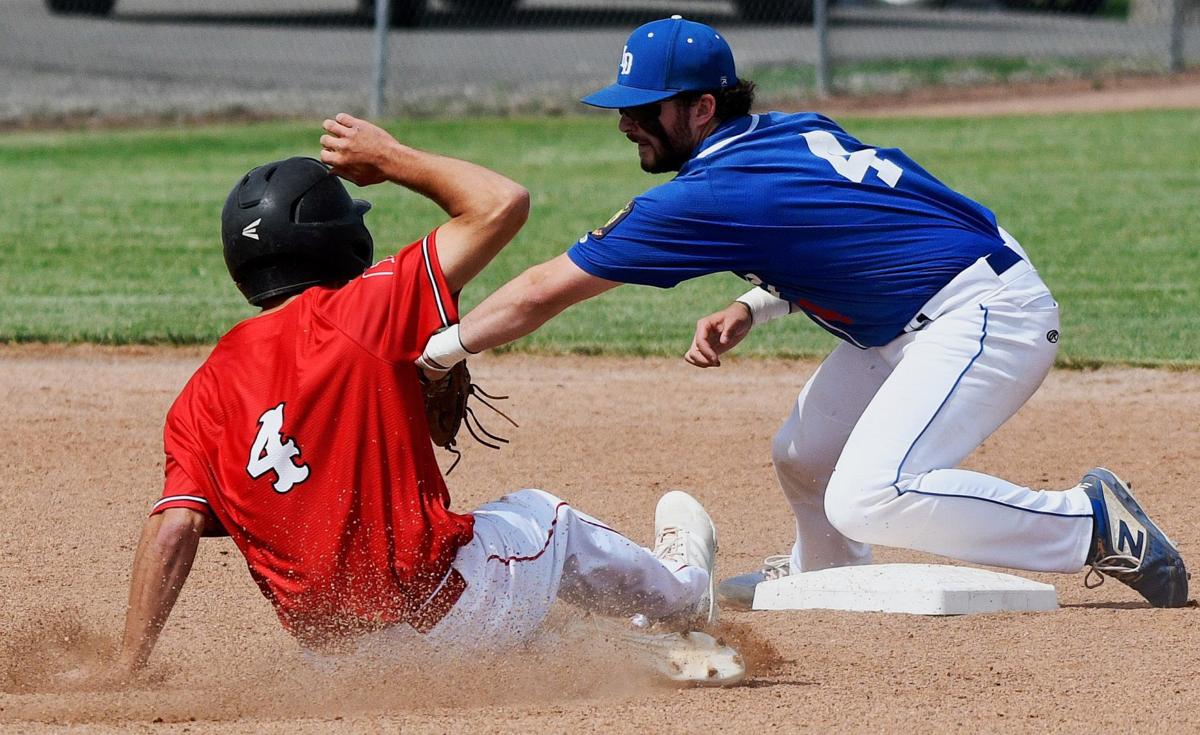 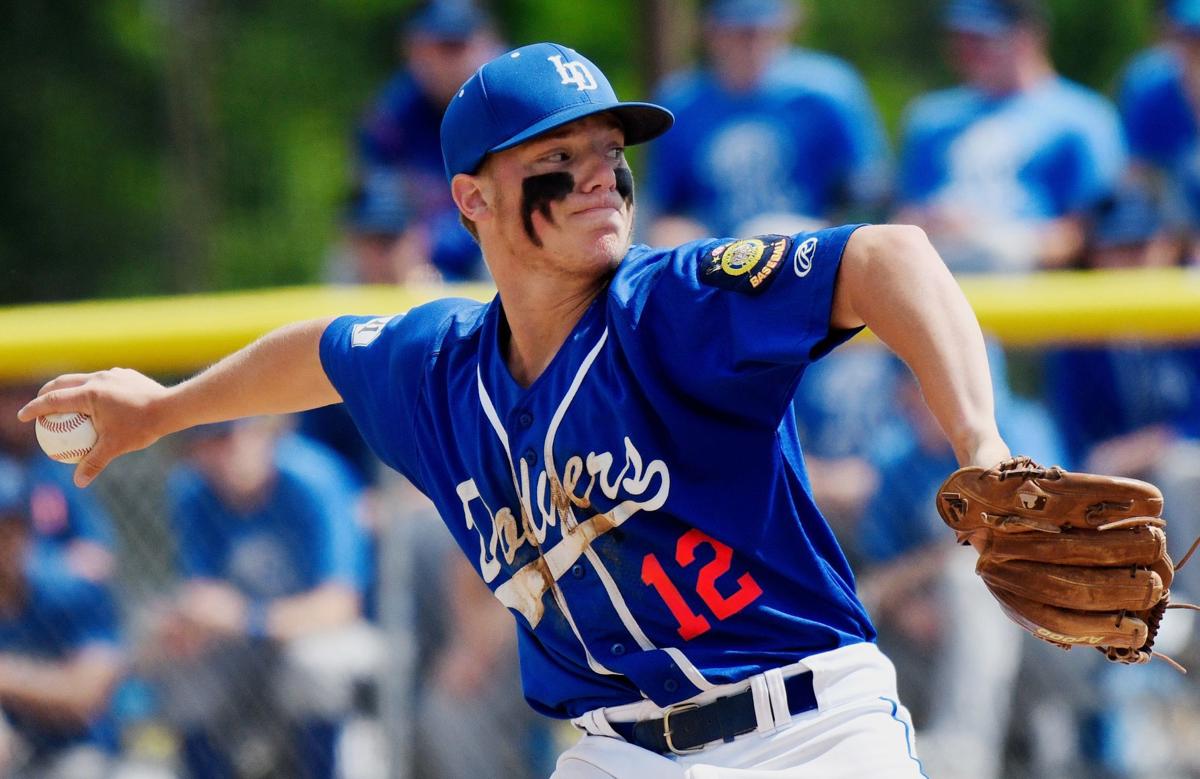 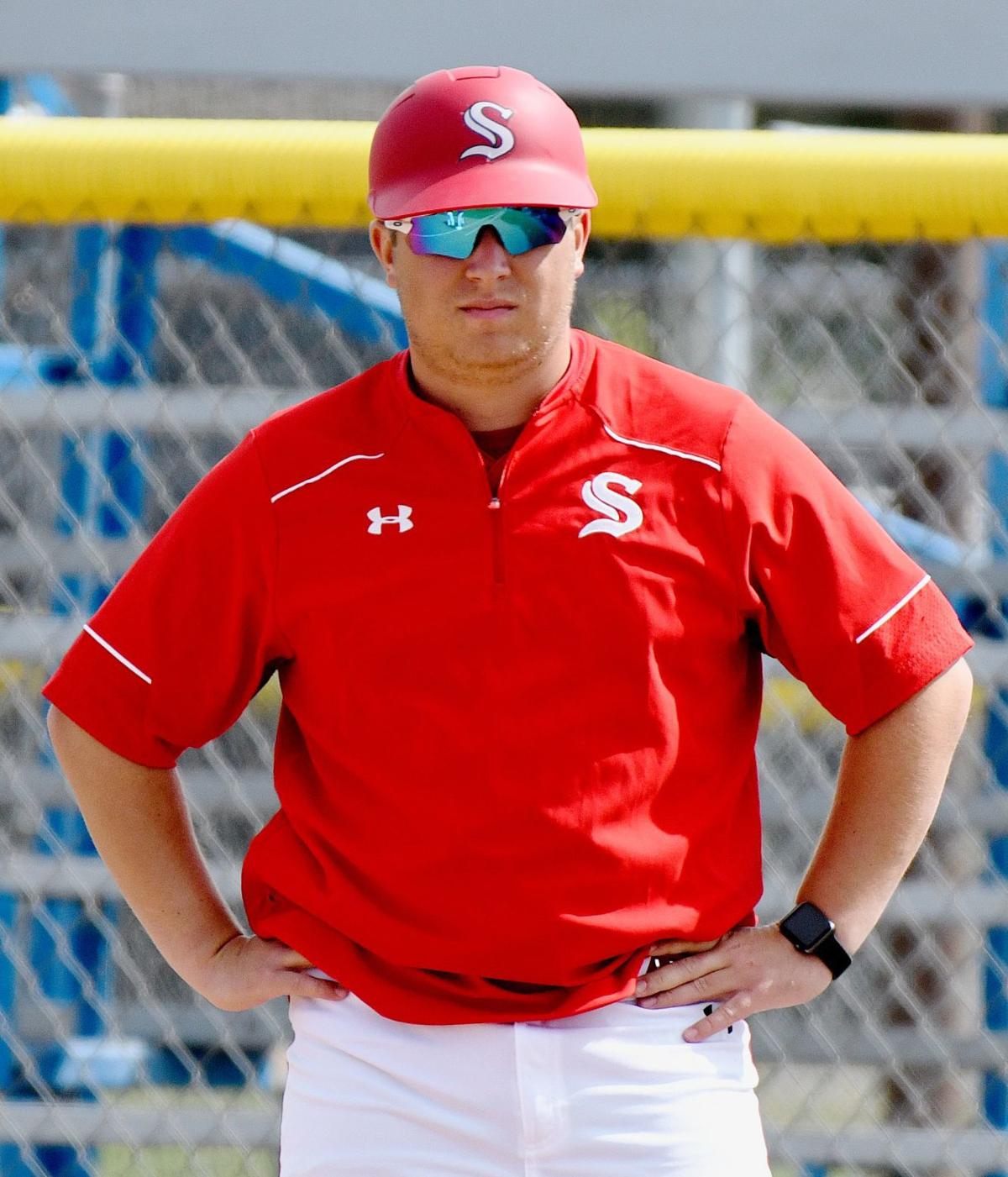 Billings Scarlets' Head Coach Adam Hust instructs players on the field during their Goldsmith Gallery Tournament game against the Laurel Dodgers on Wednesday.

Billings Scarlets' Head Coach Adam Hust instructs players on the field during their Goldsmith Gallery Tournament game against the Laurel Dodgers on Wednesday.

LAUREL — This week has not gone favorably for the Billings Scarlets.

The Class AA American Legion baseball team lost a doubleheader at Medicine Hat in Canada on Monday. A day later, the Scarlets earned a win in one of the worst ways imaginable — 17-12 in 16 innings.

The length of Tuesday night’s game was only part of the problem. Immediately after it ended, the Scarlets hopped on the bus and rode nearly 400 miles through the night back home. They couldn’t spare any time because they were scheduled to play at 10 a.m. Wednesday to open the Goldsmith Gallery Tournament.

The exhausted Scarlets rallied from a three-run deficit and sent Wednesday’s game into extra innings, but the Laurel Dodgers pulled away for a 7-3 win. Considering Billings played 24 innings in fewer than 24 hours, coach Adam Hust was impressed by his team’s performance.

“It wasn’t the ideal playing conditions,” Hust said after Wednesday’s loss. “But you know what, we’ve gotta play baseball, and all excuses aside, we made some mistakes that cost us the game. That’s baseball.”

“They’re young kids and they’re resilient and they’ll bounce back.”

The Scarlets weren’t originally slated to play the first game of the Goldsmith tournament, but a team dropped out and forced the schedule to be reshaped, according to Hust. Going from Medicine Hat to the Goldsmith without a day off was always going to be a grueling trip, but the Scarlets couldn’t foresee an unlucky schedule change compounded by a 16-inning marathon.

Hust said he reached out to Laurel and asked if Wednesday’s game could be moved to Pirtz Field in Billings at 12:30 p.m., affording the Scarlets some extra rest and eliminating a 40-mile round-trip drive. The Dodgers declined the request.

“I guess they needed the win worse than we did,” Hust said. “A lot of lost respect for the way they treated us.”

Laurel coach Doug Studiner said he preferred not to move the game to Pirtz because he didn’t want his parental volunteers to miss it. Those volunteers were in charge of field maintenance, concessions, scoreboard, etc., for all five of Wednesday’s games in Laurel.

“My parental volunteers put in a lot of time and effort, and I know they love to watch their sons play ball, so to make them be in two places at once just wasn’t going to be able to happen,” Studiner said.

The Scarlets showed signs of fatigue but nearly won their only game of the day.

Laurel scored twice in the first inning and once in the third. Starting pitcher Connor Polkowske was in command during the first five frame, and he appeared to get out of the sixth inning with one unearned run allowed. But an inning-ending double play was overturned after the umpires discussed the play at first. They ruled the runner safe, and Billings’ Brooks Rohrer hit a two-run double in the next at-bat to tie the game.

One AB before Rohrer’s double, the inning appeared to be over with the @LaurelDodgers leading 3-1 after turning this double play. But the umpires reversed the out call at first base. I’m... not exactly sure why, based on this video. pic.twitter.com/hYkrAmeOZV

The Dodgers loaded the bases in the top of the seventh but couldn’t get a single run home. Suddenly, the Scarlets had a chance to cap a demanding couple of days with a walkoff win.

“There was that one point where it was like, ‘Hmm, what’s gonna happen here?’” said Polkowske, who is signed to play baseball at Northern State University in South Dakota.

With runners on first and second, the Dodgers turned a no-doubt double play to end the bottom of the seventh inning, and they scored four runs in the top of the eighth to pull away.

The @LaurelDodgers break it open with four runs in the T8 to take a 7-3 lead over the Billings Scarlets.

“We still had it because of our team chemistry so far this year. We’re a pretty good team,” he said. “I just kept on pitching, kept on doing my thing.”

Polkowske, who previously played for the Billings Royals before moving to Laurel this past academic year, allowed no earned runs on eight hits, two walks and one hit-batsman with two strikeouts in 7 1/3 innings.

Billings’ Christian Michaelson finished 2-for-3 with a walk.

RF Ethan Clark made the other catch to end the fifth inning. pic.twitter.com/81dcinmcps

The Billings Royals went 6-0 at last year’s Goldsmith Gallery Tournament and handled Premiere BBC in the title game. Their overall record at the time was 32-4.

This summer, the Royals are 13-13 after earning an 8-7 walkoff victory over the Great Falls Chargers on Wednesday afternoon in Laurel. Royals coach Bryan Benjamin knew before the season that this summer would be tough compared to 2018, and those diminished expectations make wins like Wednesday’s that much sweeter.

“We’ll be grinding through some games,” Benjamin said. “We’ve lost some walkoffs recently, so it was good to get a walkoff win like that. The boys battled back, and that’s huge at this point of the season.”

The Royals led the Chargers 1-0 through three innings and 2-1 through four. Great Falls took a 3-2 lead in the top of the fifth, but the Royals tied it up in the bottom half and roared ahead 6-3 in the sixth. The Chargers tagged Brenden Concepcion for four runs in the top of the seventh to retake the lead, and the Royals rallied again in the bottom half, scoring their second run of the frame on a wild pitch.

Royals score twice in the B7 and win on a walkoff wild pitch. #MTscores pic.twitter.com/skafPdhiCi

It’s been that kind of season for the Royals, and that’s okay in Benjamin’s eyes. A team that graduated a bunch of talented players is also competing without Brady Uhren, who fractured his elbow after getting hit with a ball in a batting cage earlier this season, Benjamin said.

Another 6-0 showing at the Goldsmith will be difficult, but as the Royals’ 13-13 record illustrates, a rebuilding year does not mean a losing record.

“We’re a little bit younger team. We’re gonna have our ups and downs,” Benjamin said. “We just need to be playing our best ball in July, and I think we’re kind of getting there.”

BILLINGS — The Billings Royals will try to defend their Goldsmith Gallery Tournament title this week.