Helena's Trysten Mooney tags a runner out in the seventh inning of the Senators 1-0 win Friday at the Northwest Regional Tournament. 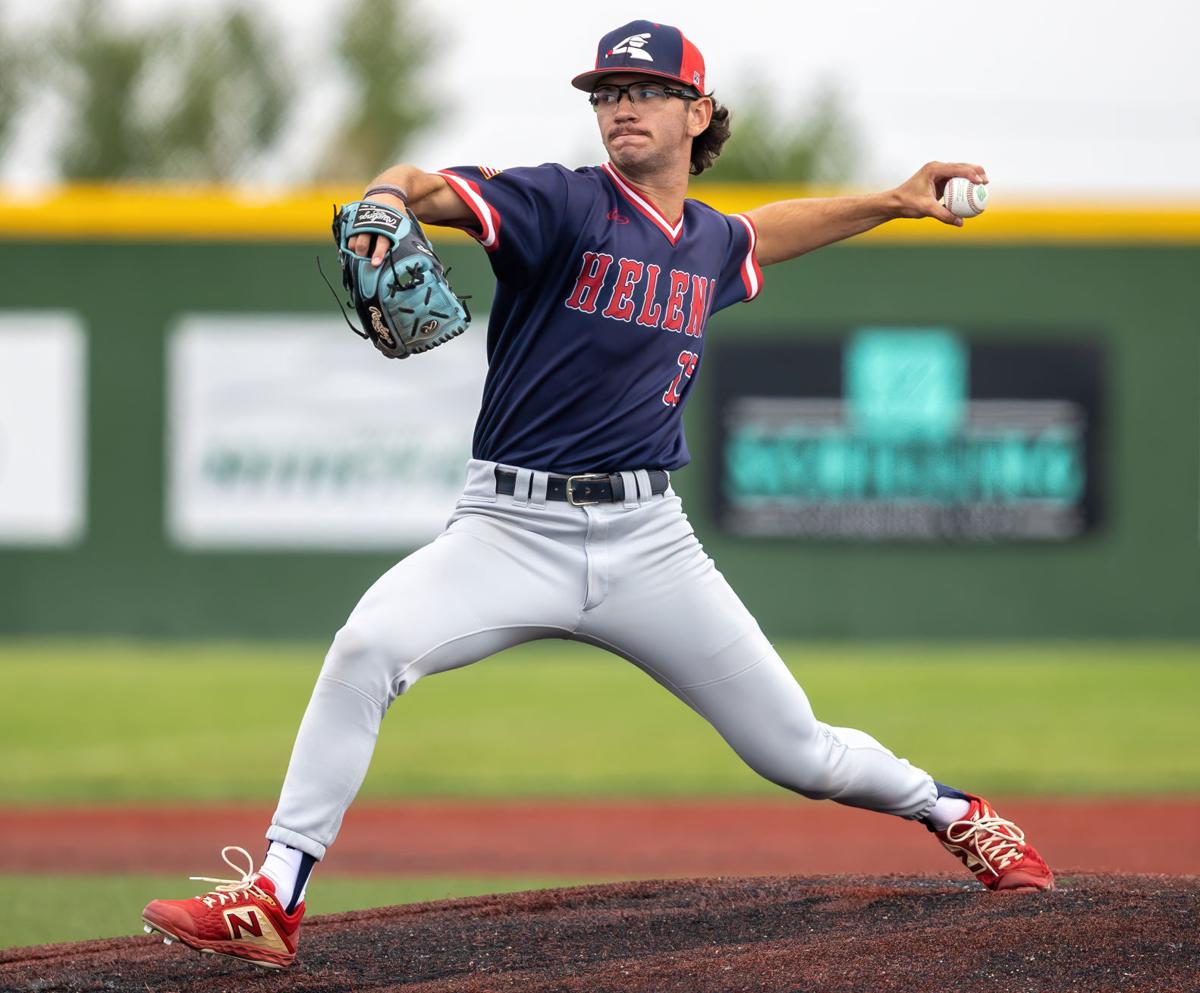 Cy Miller pitches during what turned into a complete-game shutout as Helena advanced on Friday at the Northwest Regional Tournament.

Helena's Trysten Mooney tags a runner out in the seventh inning of the Senators 1-0 win Friday at the Northwest Regional Tournament.

Cy Miller pitches during what turned into a complete-game shutout as Helena advanced on Friday at the Northwest Regional Tournament.

GILLETTE, Wy. — The Helena Senators are in full-on survive and advance mode. Seemingly always having a flair for the dramatic, Helena improved to 4-0 in its last quartet of elimination games between the AA state tournament and regionals with a 1-0 win over Cheyenne, Wyoming.

“Their pitcher was tough,” Senators head coach Jon Burnett said. “Mid- to upper-80s, sharp breaking ball. Got just enough in that first inning and had the right guy on the mound with Cy out there.”

Cy Miller was tougher for Helena. Pitching against a Division I commit in Colter McAnelly, the Senators’ southpaw out-dueled the future Missouri Tiger and pitched his squad into the next round of regionals.

“He’s our emotional team leader,” Burnett said of Miller. “We play well behind him on the mound and we know anytime he goes we have a good chance out there. That’s a team that’s almost won 70 games this year and he just shut them down. That’s awesome to see.”

Miller scattered five hits over seven innings, and worked himself out of a handful of jams on his way to the win. Back-to-back singles and a walk in the second inning filled the bases for the Sixers, but Miller struck out Ben Bohlmann and induced a fly-out to escape.

The Senators turned a 6-4-3 double play to get out of the fourth inning and Miller sat down the side in order in the fifth.

Then the lightning came with Helena holding the slimmest of margins.

A 35-minute delay halted play in the sixth and threatened to burn both starting pitchers, each of which were dealing into the latter portion of the contest.

“You’re just thinking, ‘we were locked in, I’m just hoping we can keep that intensity and for Cy to stay sharp,’” Burnett said. “You would hate to have him come back and not be as sharp as he was going out there. We were a little loose in the dugout and I liked it. We were a lot more loose than they were, they were pretty tight in that lightning delay. Cy is such a strong kind mentally. We want him in that situation.”

Miller answered the bell, striking out two of the first three batters he faced post-delay and skipped off the mound to the cheers of the crowd and his teammates.

“Just tried to stay loose [during the delay],” Miller said. “Sometimes those can get extended and that was the only thing I was worried about. I just stayed loose, kinda relaxed a little bit, let the nerves go away. They kinda came back as soon as I got out on the mound, but just tried to stay loose so we could win that game.”

A one-out triple in the seventh inning put Helena’s advantage in jeopardy. Two batters later, Cheyenne attempted a squeeze play, but Miller fielded the ball in front of the mound, and flipped to Trysten Mooney to nab the tying run at the plate.

Miller punched out the final batter of the game, running his strikeout total to 10 in the complete-game masterpiece.

“Anytime [Cy] takes the ball and gets on the mound, he just has that chip on his shoulder,” Burnett said. “He has that confidence. He knows he’s better than the guy in the box and he’s gonna go attack them. He just exudes that confidence and it makes our defense confident behind him.”

Of those strikeouts, six were looking as the southpaw worked in all of his pitches for strikes at different points throughout the game.

“It seems like everything. I was getting the curveball backdoor,” Miller said. “Changeup -- getting early swings on it. Could throw pretty much anything in any count. Felt great.”

Miller needed just one run of support on Friday, and that came in the first inning. Consecutive singles put runners on the corners for the Senators. An error on a pick-off attempt plated Ethan Keintz for the only (unearned) run of the game.

Keintz and Tyler Tenney had the only two hits for Helena on the day as McAnelly struck out 11 of the 20 batters he faced.

Still, the Senators found a way and became the first team to advance into Day 4 of the regional.

Helena is currently slated to play Yakima Valley at 4 p.m. on Saturday.