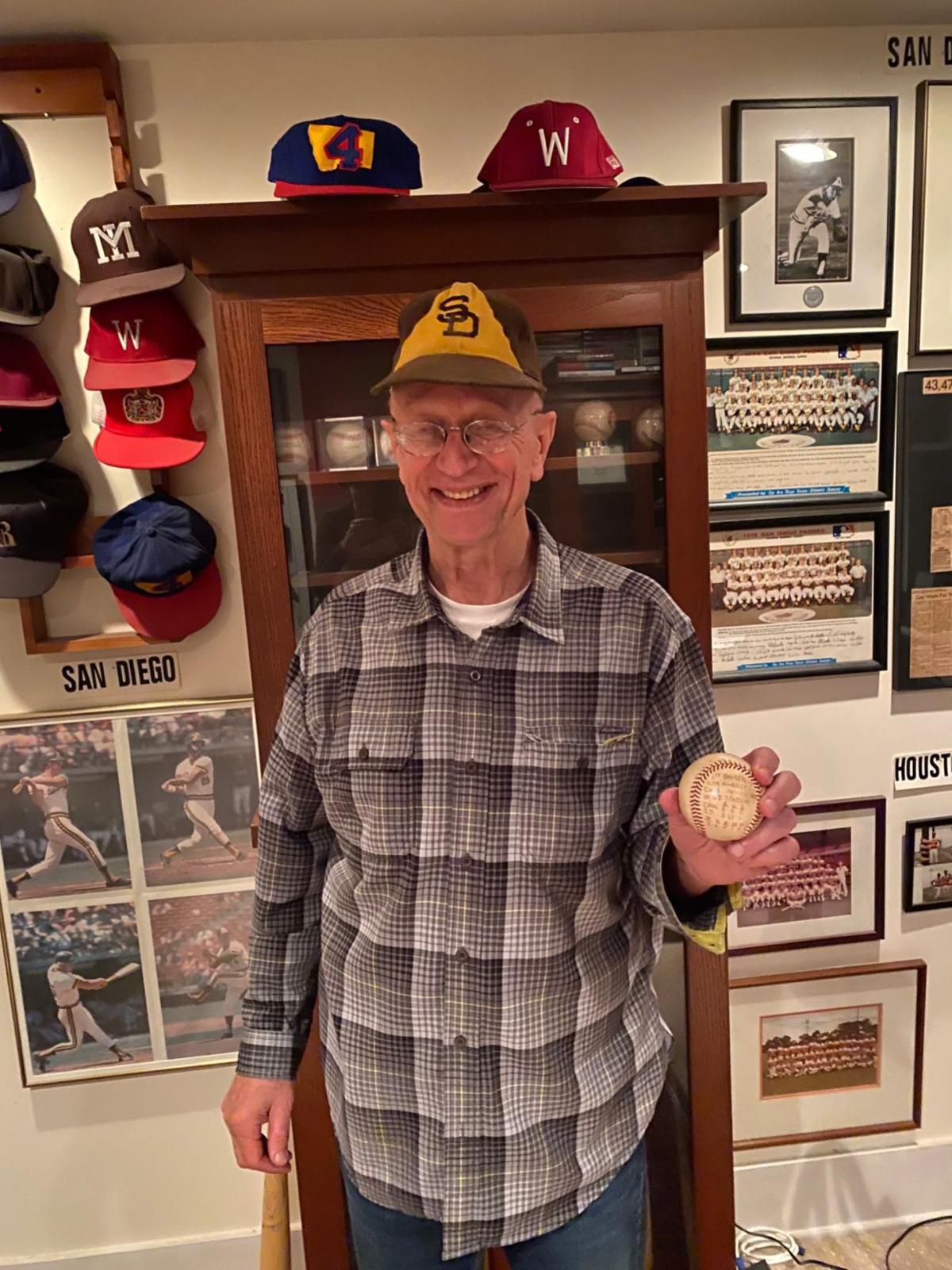 Joe McIntosh holds the game ball from his first career major-league victory, April 12, 1975, against the Cincinnati Reds. Shown just above McIntosh is one of his Billings American Legion Post 4 baseball caps alongside his Washington State cap. 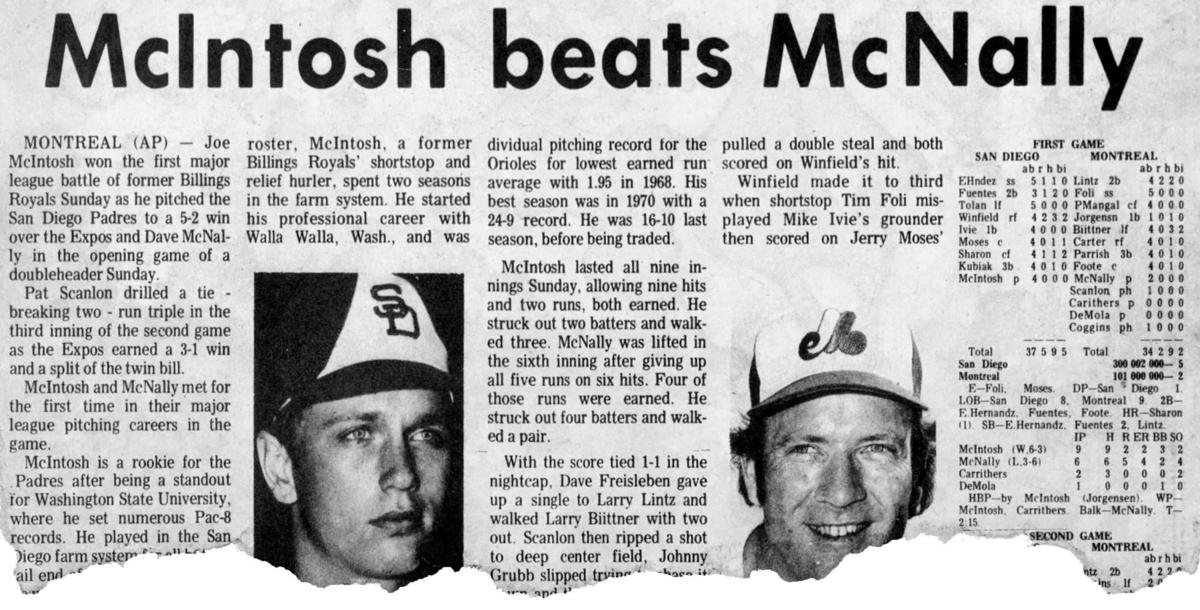 An Associated Press story reports on a game between the San Diego Padres and the Montreal Expos in June 1975. Billings natives Joe McIntosh and Dave McNally, both pitchers, faced off in the game, which ended up being McNally's last game in Major League Baseball. 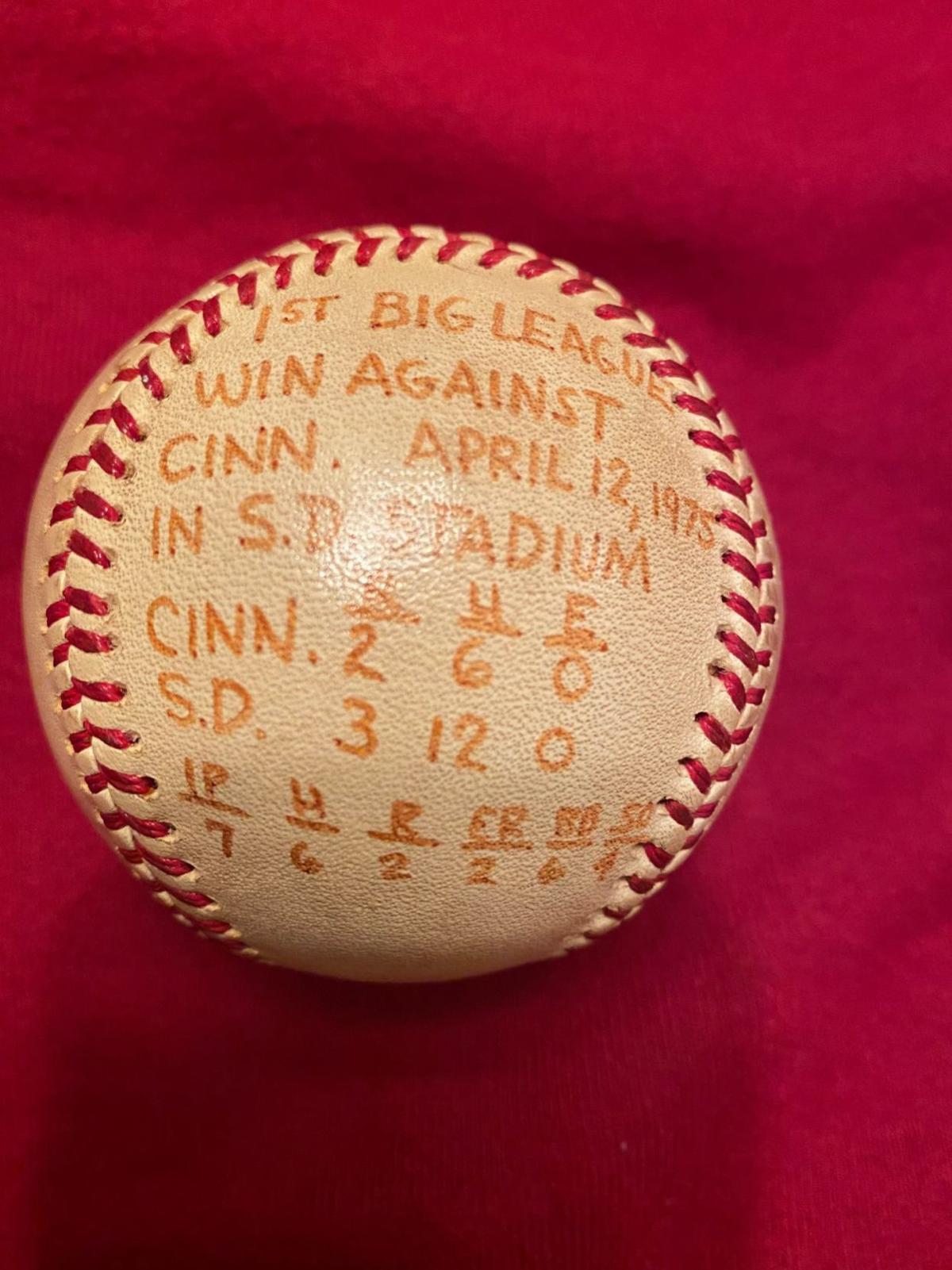 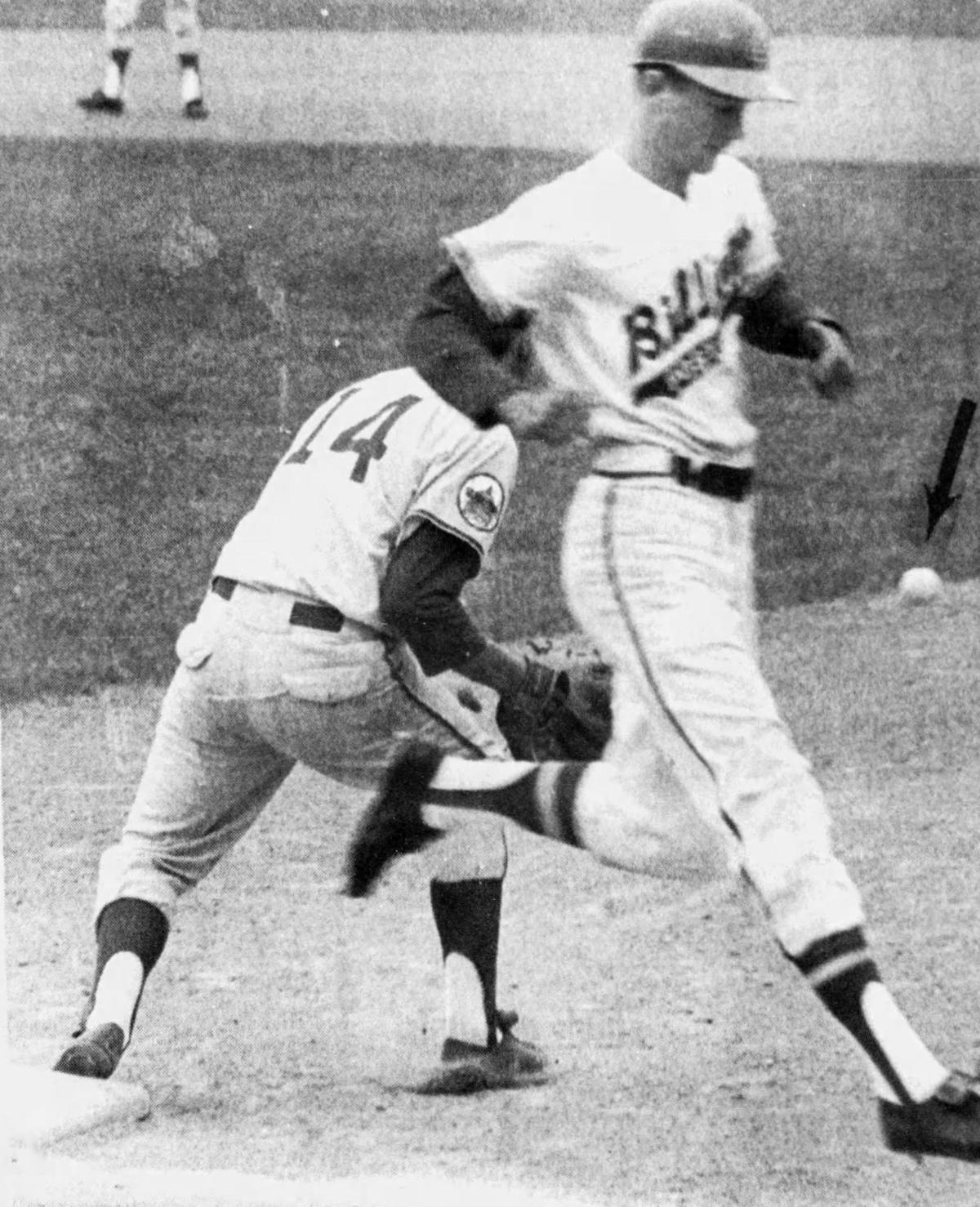 Joe McIntosh crosses a base during a Billings Royals game in June of 1969. An arrow was added to the photo to show that McIntosh was safe during the play. 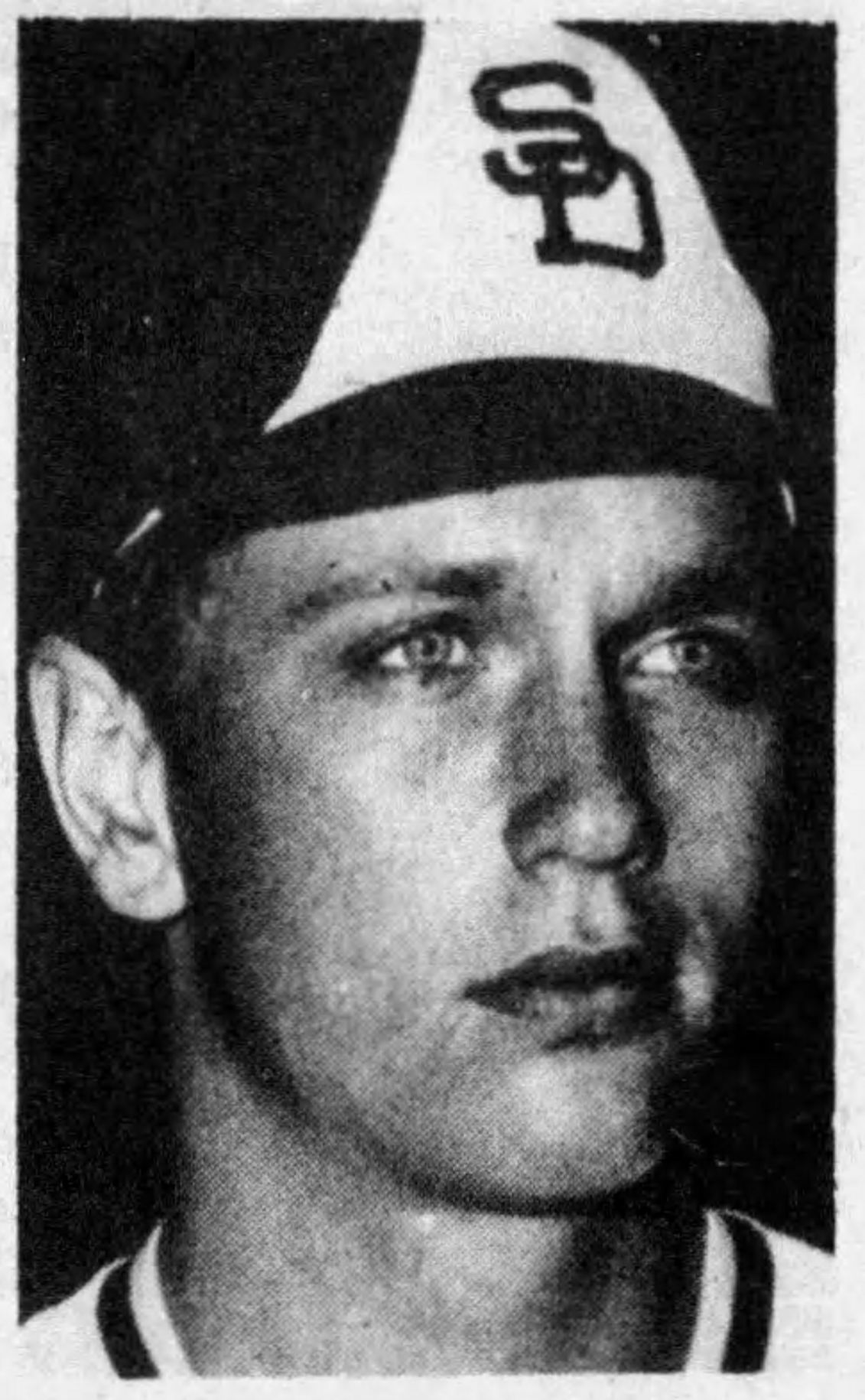 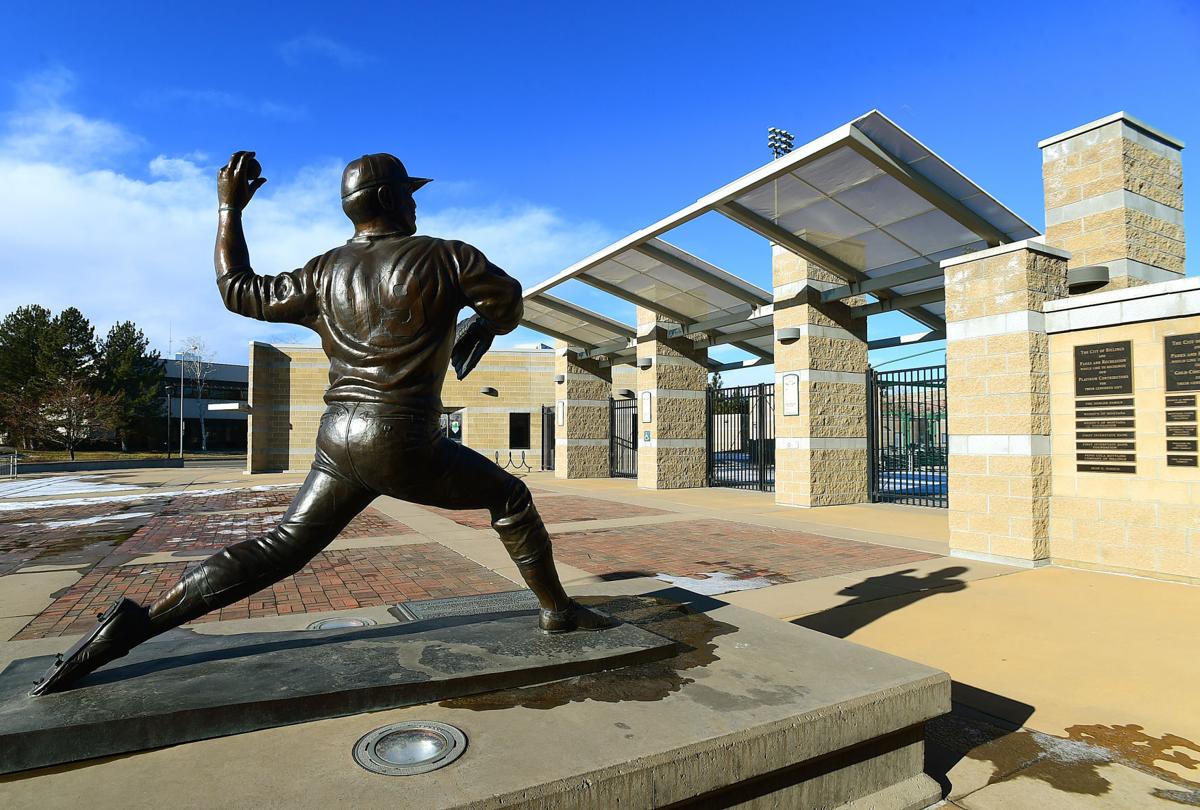 A sculpture of Billings baseball great Dave McNally stands at the entrance to Dehler Park. 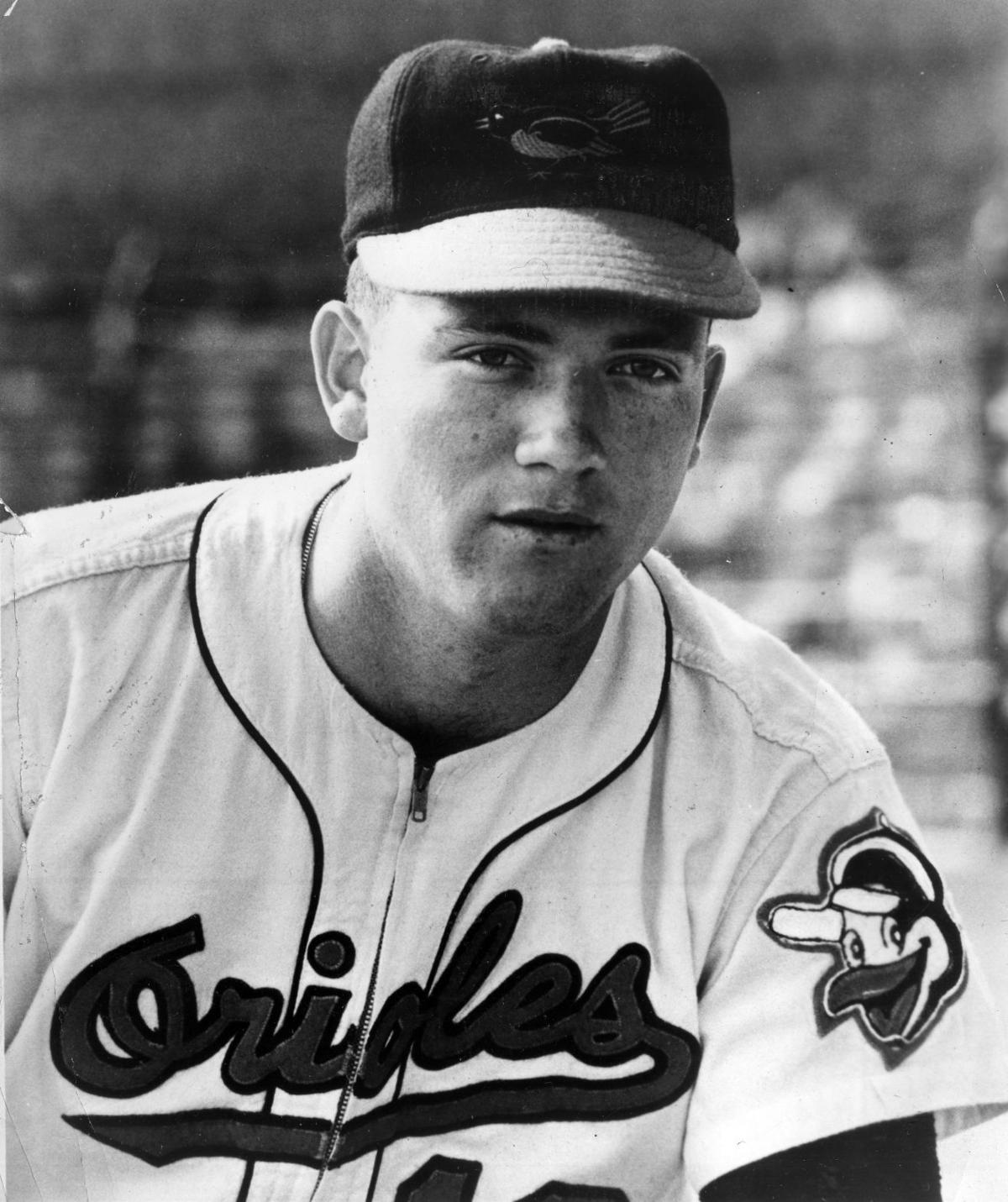 Dave McNally was chosen as the No. 1 athlete from Montana in a December 1999 Sports Illustrated feature. A two-time World Series champion with the Baltimore Orioles, McNally is the only Major League pitcher to ever hit a grand slam in a World Series.

BILLINGS — It was June 8, 1975, and in less than a couple hours, on a 57-degree day in Montreal, Quebec, Dave McNally of the Expos, and Joe McIntosh, a pitcher for the San Diego Padres, would be taking turns throwing baseballs from the Parc Jerry mound.

Though eight years apart in age, the two Billings natives were well-known to each other. They were both ‘Bayne boys,’ that is, former members of the Billings American Legion Post 4 baseball program under legendary coach Ed Bayne, and McNally was good friends with McIntosh’s older brother, Bill. McNally spent many a day at the McIntosh home on Spruce Street.

Joe McIntosh felt he should at least say hello to his friend before the game, which was just another June contest to most. But to McIntosh and McNally and anyone from Billings, it had more significance than that.

The game would be the first and, so far, last time two Billings men faced off in a major-league game.

It’s not uncommon in today’s game for opponents to fraternize on the field before games, but in 1975, that was frowned upon. So McIntosh strolled to the telephone in the Padres’ clubhouse, called over to the Expos’ side, and asked to speak to McNally.

“Just a minute,” came the reply.

McIntosh waited, and when McNally got on the line, McIntosh said: “Hey, Dave, this is Joey McIntosh.”

The two exchanged pleasantries for a few minutes and just before saying so long, McNally spoke in not-so-secret code, at least in terms of the language of the pitcher.

“Nothin’ but fastballs down the middle, right?” he said.

McIntosh, briefly caught off-guard by the sudden baseball talk, hesitated before replying, “Right,” and the pair hung up to prepare for their duel.

McNally was on the tail end of a storied career that began with the Baltimore Orioles. In fact, the game would be the last he would ever pitch, though he would later go on to make more baseball history by being part of a lawsuit with another pitcher, Andy Messersmith, which challenged the game’s reserve clause and eventually led to free agency for players.

McIntosh was in the early stages of what looked to be a blossoming career, a career the 23-year-old hoped would be as lengthy and fruitful as the man’s he was going up against this day. But this game, the first of a Sunday doubleheader in Montreal, would prove to be McIntosh’s peak.

McIntosh didn’t think much of it then, but he does now: two Billings kids, who grew up near each other, who later played for the same Legion coach, trying to beat the other in a Major League Baseball game.

“A couple of Bayne boys who meet in the province of Quebec,” said McIntosh, now 68 and still practicing law in Seattle, and over the phone you can almost picture him slowly shaking his head at the thought. “How odd is that.”

It was more a statement of wonder than a question.

McNally, of course, had already made a name for himself by being part of one of the best pitching staffs in MLB history. Alongside Jim Palmer, Mike Cuellar and Pat Dobson in 1971, the O’s became just the second team in history to have four 20-game winners. It still is.

That 1971 season was the last of four consecutive 20-win seasons for McNally, who was a three-time all-star with two World Series rings to his credit. McNally helped the Orioles subdue an early incarnation of Cincinnati’s Big Red Machine for the 1970 world’s championship — in Game 3 McNally became the only pitcher in World Series history to hit a grand slam — and in 1966, McNally threw a four-hit shutout of the Los Angeles Dodgers to clinch a four-game sweep.

And guess who was in Baltimore’s Memorial Stadium stands for that memorable day? Yep, McNally had gotten 14-year-old Joe and eldest brother Tom tickets for the game. Tom was already on the East Coast, working in Silver Spring, Maryland, and Joe’s mom got him a plane ticket and sent the youngster off to Baltimore, where the two brothers watched their family friend outpitch Don Drysdale in a game that took just 1 hour, 45 minutes to complete.

“I followed him like crazy,” Joe McIntosh said of McNally. “I adored him. He was always so good to me and my family. I rooted for him the whole way.”

You’re going to believe him. So when McIntosh strolled to the plate for his first at-bat of that 1975 game, he was ready to swing away at those meatballs.

Instead, McIntosh got three McNally curveballs. Good morning, good afternoon, good night. As he strolled back to the dugout, McIntosh looked over his shoulder toward his counterpart. McNally, McIntosh insisted, was laughing.

“He had a great curveball,” McIntosh said. “There was no way I was going to hit that.”

At that point, McIntosh knew the jig was up. McNally had playfully taken him for a ride — that’s what veterans did to rookies — and so McIntosh figured he didn’t have to hold to McNally’s mantra, either.

McIntosh got McNally to ground out in his first at-bat and induced a long, foul fly out to left field in McNally’s second appearance. McIntosh was momentarily worried about that one, but Bobby Tolan eventually hauled it in.

The Padres had given McIntosh a three-run cushion in the top of the first and added two more in the sixth, ending McNally’s day, and, as it turned out, his career.

Saying he could no longer “throw the baseball. I have no oomph on it,” McNally retired the next day. An Associated Press story said McNally walked out of the Expos clubhouse following his loss to McIntosh and the Padres and went back to his Maryland home. 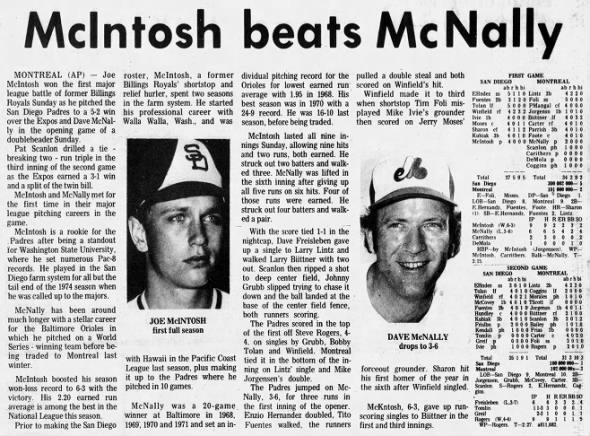 McNally returned to Billings when his children’s school year finished and opened a car dealership. McIntosh said he didn’t talk to McNally after the game, only before, and in that pre-game phone conversation McNally never mentioned he was contemplating retirement.

“Probably if he lost to me he figured that’s it,” McIntosh joked.

Did McNally hang on long enough for the sole purpose of pitching against McIntosh? We might never know. McNally died of cancer in 2002.

In the game that McNally decided was his last, McIntosh pitched the Padres to a 5-2 win with a complete game, and it moved him to 6-3 on the season and lowered his ERA to 2.18.

But that was as good as it got. Pitching for a bad team that didn’t have much pitching depth, McIntosh logged the second-most innings on the Padres, 183, and, perhaps worn down by the work on a young arm, finished that 1975 season 8-15 with a 3.69 ERA.

He was traded to the Houston Astros in the off-season, a move that caught McIntosh by surprise. What also came as a surprise was a labor dispute between the players, who were seeking ever more freedom, and the team owners, who decided to lock the players out of spring training camps in hopes of showing the work force the folly of following the path Messersmith and McNally had started.

With no camps, players were left to work out on their own, and McIntosh tore his rotator cuff while working out with friends in San Diego. Surgery was required, and shoulder injuries never being a pitcher’s friend, McIntosh never pitched in the big leagues again.

He sat out 1976, 1977 and 1978 to focus on coaching, and tried a short comeback with four rookie-league rehab innings in 1979. But like his Billings counterpart just four years earlier, McIntosh realized he no longer had it.

He went back to college, worked a few years in New York City and Washington, D.C., and wound up in Seattle. He’s been there since 1983.

He recalls fondly his MLB debut, April 5, 1974, at Dodgers Stadium — “That’s not quite Cobb Field,” he said with a chuckle — when he allowed one unearned run in two innings of relief. After five relief appearances, the Padres sent McIntosh back to the minor leagues but recalled him in September. He made his first major-league start Sept. 4 against the Atlanta Braves.

In 1975, McIntosh again broke spring training as a member of the Padres’ major-league roster. This time, he stuck. He won his first start of 1975 and gained his first career victory by beating the Reds, who went on to win the ’75 World Series, with seven innings of two-run ball on April 12.

And by the time he beat McNally, things couldn’t have been going better. But McIntosh faded from there and the rest, as they say, is history. His career totals: 47 games, 33 starts, 220 innings pitched, an 8-19 record and a 3.68 ERA.

But he was able to play with two future hall of famers in the aging Willie McCovey and the up-and-coming Dave Winfield and was pitching mates with the man who would win the 1976 National League Cy Young Award, sly left-hander Randy Jones.

His year-plus career placed him smack dab in the middle of one of the most colorful decades in baseball history, when players had big personalities to go with their big games.

Back then, though, McIntosh didn’t have time to take it all in. You’re too busy playing games and trying to get better to think about how wonderful that life is, he said. Besides, it was all so fleeting, for him at least.

He still has that most unusual day, though, when two “Bayne boys” went at it in a place that couldn’t be any more different than Billings, Montana, and the player he adored as a kid told him “Nothin’ but fastballs down the middle, right?”

“It was a great part of my life,” McIntosh said. “It didn’t last very long, but it was there. I still follow the game, it’s such a great game. I was just glad I was able to play as much as I did.”

Montana Greats — The greatest athletes from all over Montana