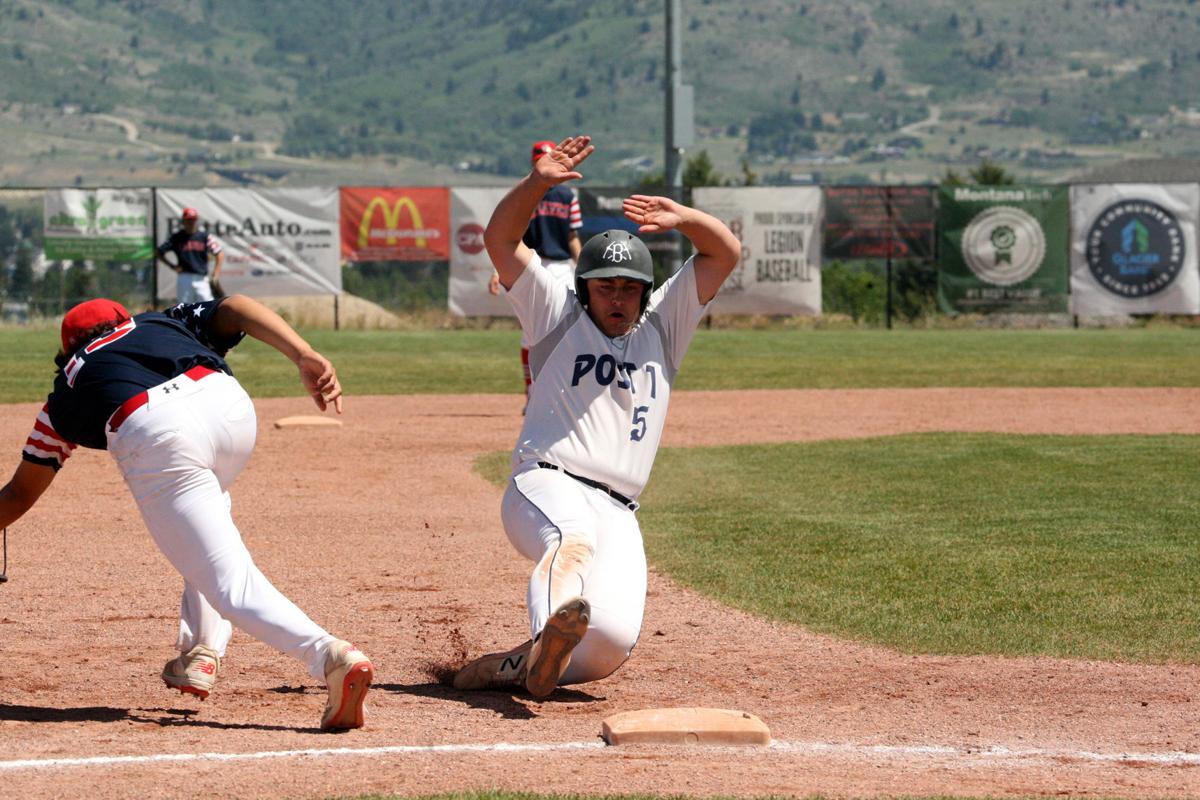 Butte's Aidan Lee slides into third during the Miners' 11-0 win over the Livingston Braves Saturday. 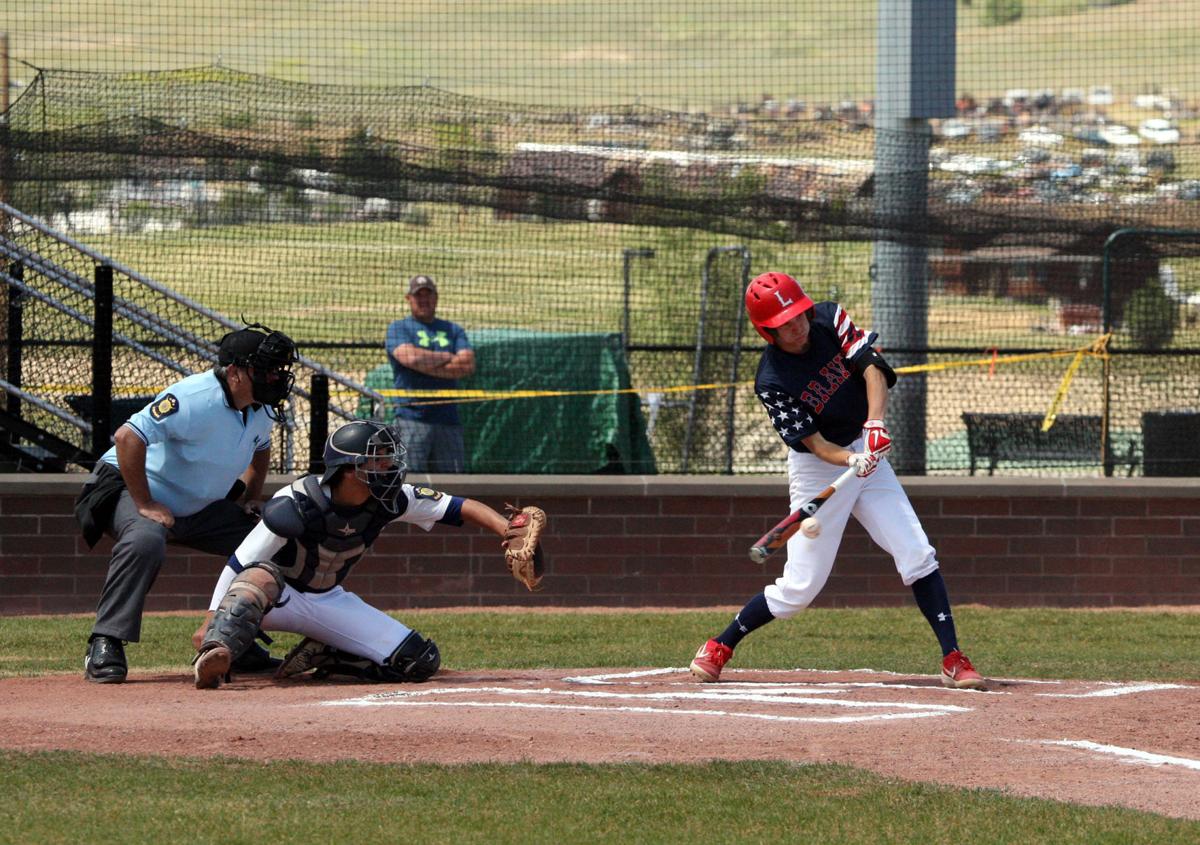 Livingston's Max Stern hits a single during the Braves' doubleheader with the Butte Miners on Saturday. 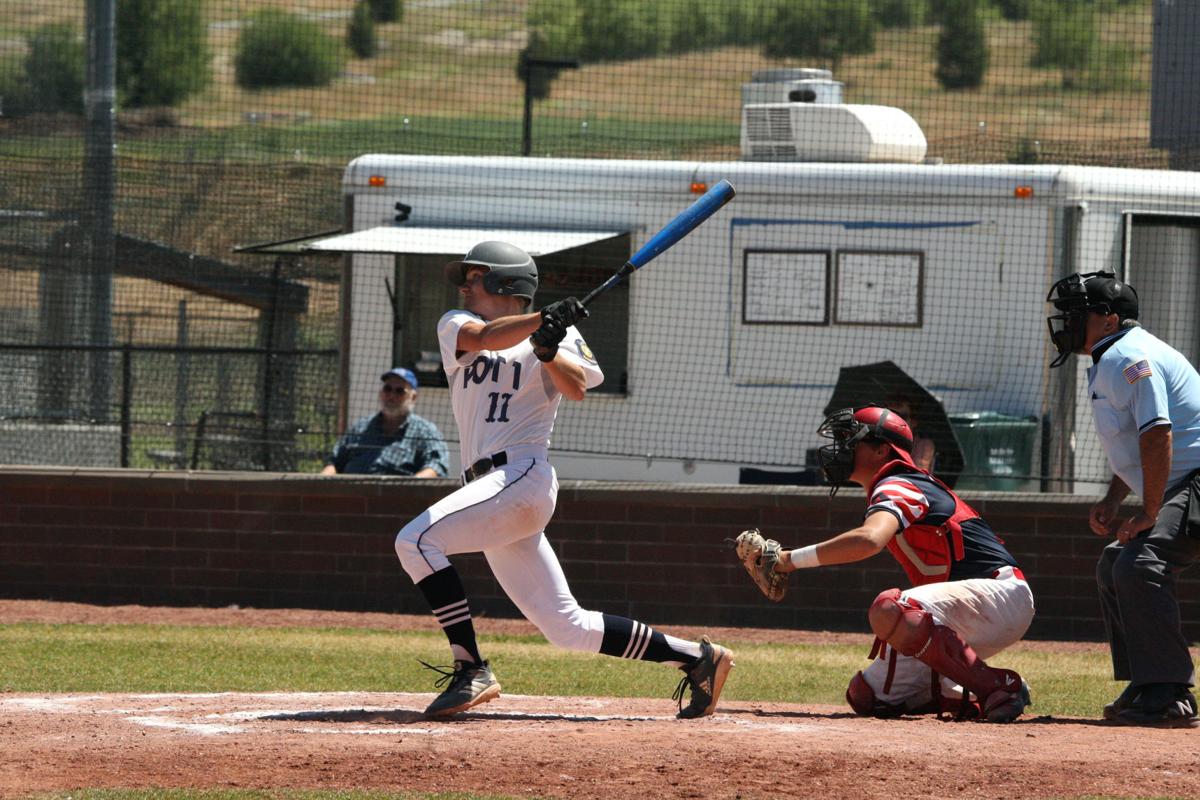 Butte's Aidan Lee slides into third during the Miners' 11-0 win over the Livingston Braves Saturday.

Livingston's Max Stern hits a single during the Braves' doubleheader with the Butte Miners on Saturday.

The Miners made the most of their final home weekend.

Butte hosted the Livingston Braves for their final American Legion home doubleheader of the regular season, taking down their Southern A opponents by scores of 19-2 and 12-0.

Miners head coach Jeff LeProwse said the weekend, which featured a Friday night sweep of the non-conference Bitteroot Bucs (14-3 and 15-4,) came at a good time as the Miners head to Three Forks for the district tourney.

"We came off a four-game losing streak a couple weeks ago," LeProwse said. "I think it's something we needed a lot. Confidence is a great thing to have heading into a tournament, and I think we have a lot right now."

While Butte waits for the rest of the Southern A to finalize seeding, they wrap up the year with a 22-6 conference record.

The Miners kicked off their final doubleheader at home with an emphatic win.

Butte defeated Livingston [], initially jumping out to a 11-0 lead thanks to hot bats and sharp pitching from Rylan Richards saw the Miners quickly take control in Saturday’s opener.

Richards began his day with two strikeouts to get Butte up to bat. After leadoff hitter Kenley Leary and shortstop Ryan Wahl got on base through walks, a pair of singles from 1B Aidan Lee and 2B Eric Hart kept the momentum going, with Hart’s single scoring Leary and Wahl.

Livingston pitcher Scott Tatum and the Braves were able to mitigate the damage, however, as RF Zack Beal caught a lineout from Zach Tierney and earned a second out on the tag.

While Livingston did well to limit the Miners to two runs, Richards’ continued an impressive pitching display picking up two more strikeouts to quickly get Butte back on offense.

LeProwse commented on the pitching performance from Richards and Wahl, who went on to pitch the entirety of the second game.

"It's the reason why they're our No.1 and No.2 guys," LeProwse said. "I thought they did really well, if you don't walk people and throw your offspeed and fastball for strikes, you're going to have a lot of success."

While Richards dealt strikeouts, Butte proceeded to score nine runs over the next two innings, as 3B Kian O’Neill registered an opening single in the bottom of the second inning and then earned an RBI in the third with another double.

However, with a hit from Braves CF Rob Wolf and a few errant pitches from Richards, Livingston scored two runs in the fourth to keep the game alive but trailing 11-2.

Aside from several changes to the lineup, the Miner bats would not cool down, with Rye Doherty hitting a sacrifice fly to score Ethan Edwards to get Butte back up 10.

A Leary single then scored Hunter Salcido and Doherty, before a Wahl single scored Leary. Through a few Livingston errors, the Miners made it 19-2 and all but locked up an opening win.

Richards saw out the win by earning his seventh and eighth strikeout of the contest.

Wahl started on the mound for the closing game, along with a few other positional changes. However, the switch did not stagger Butte, as both the Miners' pitching and hitting continued to excel.

Livingston SS River Smith and 3B Simon Coleman earned the only two Braves hits of the second game, with Smith's coming as a promising single in the first inning.

However, Wahl notched five strikeouts in the opening two innings, allowing little room for the Braves to get going.

Meanwhile, Butte's bats continued to generate offense, with Wahl earning the opening RBI with a single to score Richards. Hits and a couple errors saw the Miners go through their lineup, with Reece Cox's single scoring Butte's other run to go up 2-0 after one.

After Coleman's double but more tidy work from Wahl, the Miners scored through errors before Ethan Edwards drove in Hart while Hunter Salcido's single scored Stojcur.

Evan Starr and Richards also earned RBIs as Butte refused to slow down, going up 10-0 after two.

The rest of the way was all about Wahl, who finished with eight strikeouts, grinding out strikes and groundouts, while Butte added backing to their lead through a Stojcur groundout in the third inning and Richards hit another RBI single.

The Miners ended with 25 hits over the two contests, which LeProwse said is due to the fact that the entire team is confident at the plate.

"We've been hitting the ball really well," LeProwse said. "And it's all 17 guys, too. It's going to be interesting making out a lineup for district, we have our starters set, but we found some guys this weekend that if we need a pinch hit, they're ready."