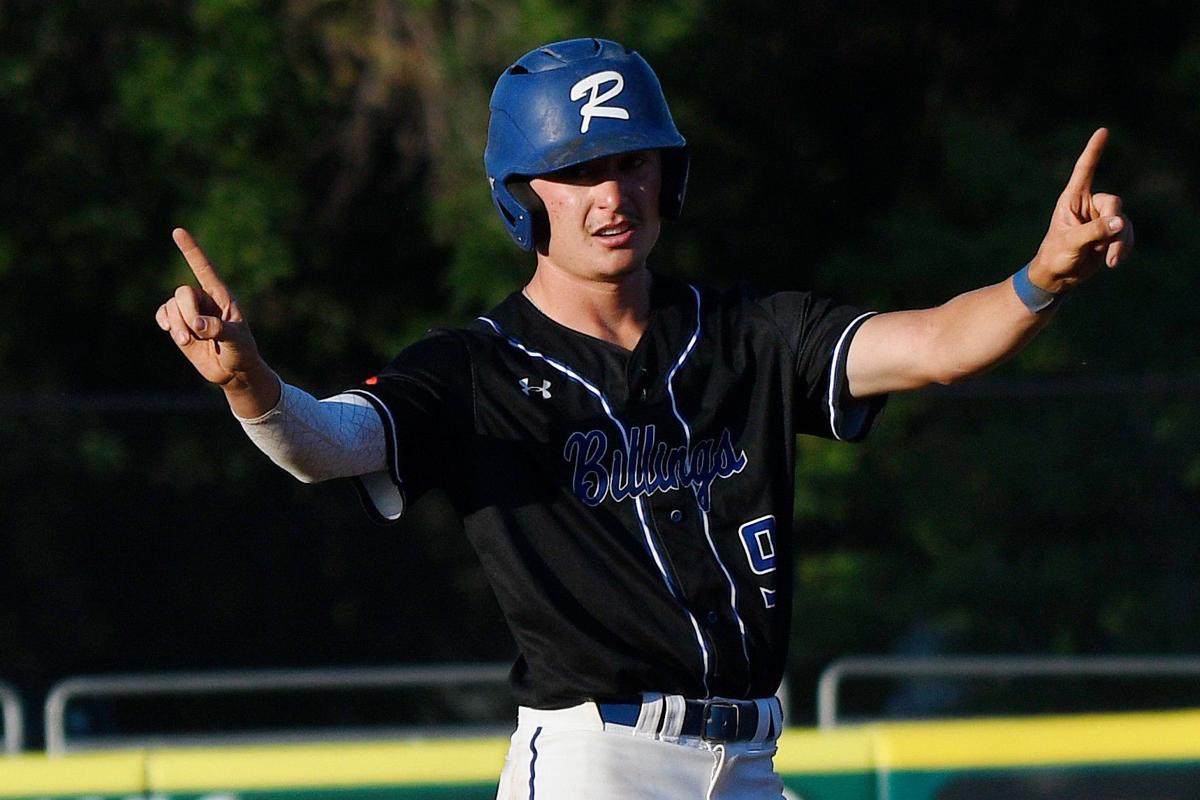 The Royals' Ethan Opp signals to teammates after reaching second base during a 5-2 victory over Missoula on Sunday at Dehler Park. 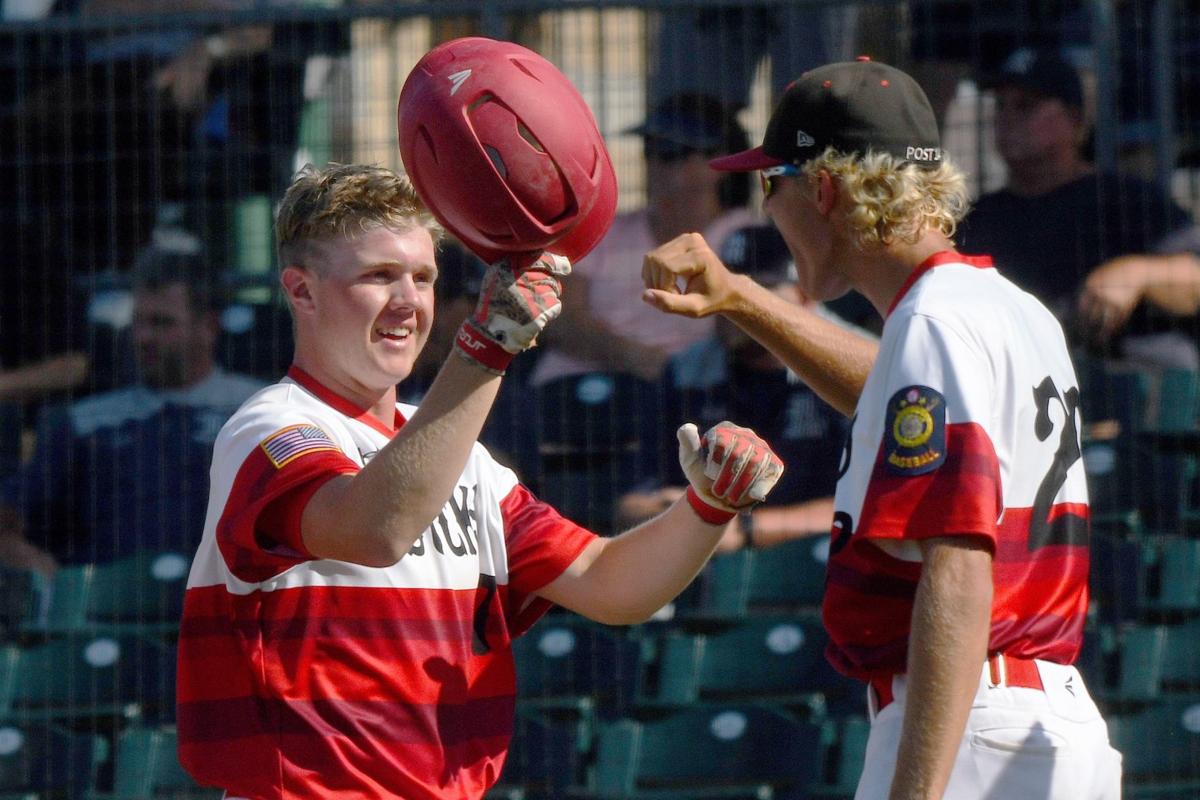 Bozeman's Cole Simcox, left, celebrates with teammate Sam Schmidt during the Bucks' 8-2 victory over Helena on Sunday at Dehler Park.

The Royals' Ethan Opp signals to teammates after reaching second base during a 5-2 victory over Missoula on Sunday at Dehler Park.

Bozeman's Cole Simcox, left, celebrates with teammate Sam Schmidt during the Bucks' 8-2 victory over Helena on Sunday at Dehler Park.

BILLINGS — Chase Hinckley knows his limitations, and that might be his best asset.

And if the Billings Royals came into the Montana/Alberta American Legion baseball State AA tournament flying a bit under the radar, they’ve clearly announced their presence.

Hinckley threw six strong innings Sunday night at Dehler Park to propel the fifth-seeded Royals to a 5-2 victory over No. 1 Missoula and into an all-important undefeated semifinal matchup with Bozeman on Monday at 7 p.m.

The Bucks defeated Helena 8-2 earlier Sunday for their second tournament win. Meanwhile, the Billings Scarlets and Lethbridge both stayed alive with loser-out victories.

Hinckley, a left-hander, did everything he was asked to do for the Royals, and he approached it with an honest mindset.

“I’m just going to go out and throw strikes,” he said. “I’m not a power pitcher. I’m not going to blow guys away at 90 mph. I’m going to get ground balls and we’re going to make plays.”

Mixing a fastball and a tricky slider, Hinckley gave up two runs on three hits in six innings with six strikeouts and one walk. In the fifth, the Mavericks had the bases loaded with one out but Hinckley was able to escape.

The Mavericks’ Brendon Hill swung and bounced a ball in front of the plate but nobody moved assuming it was a foul ball. Royals catcher Cole Miller alertly gathered the ball, stepped on home for a force out and threw to first to complete a crucial double play and end the threat.

Longtime Missoula coach Brent Hathaway didn’t dwell on his team’s inability to score in that instance.

“It wasn’t just that moment,” Hathaway said. “Give credit where credit is due. The Hinckley kid just dominated our hitters all night long and we weren’t able to put the barrel on the ball.

“We put too much pressure on ourselves. If you don’t score you can’t win, and tonight was their night.”

Connor Hunter stole two bases and scored two runs for the Royals. Jaeden Jordahl, Brenden Concepcion, Nick Eliason (who earned the save in relief in the seventh), Hayden Yarbrough and Michael Moorehead all had RBIs.

Missoula put two runs up in the sixth against Hinckley on Drew Stensrud’s two-out double to the left-center field gap.

The Royals, the defending state champions, posted a rather pedestrian 12-12 conference record in the regular season, but now find themselves in a great spot heading into Monday.

“That last week and a half of the season I felt us gelling a little bit better and just kind of coming together,” coach Bryan Benjamin said. “It’s huge being in that (undefeated) game.”

The Mavericks, who went 17-7 in the regular season, will face the Billings Scarlets in a loser-out game Monday. They’ll try to shake off Sunday’s loss to keep their title hopes alive.

“Now you’re playing each day just to get to the next day,” Hathaway said. “We’ll see what (Monday) brings. We’ve just got to bounce back, so hopefully we will.”

To retire Bozeman center fielder Kelher Murfitt has become a difficult proposition for opposing pitchers at this state tournament.

Through two games, Murfitt has reached safely in seven of his nine plate appearances. He was on base three times and scored two runs in the win over Helena.The second-seeded Bucks are now 2-0 at the tournament having scored 19 total runs.

Murfitt had three hits, scored thrice and reached base four times in the Bucks’ first-round victory over the Scarlets on Saturday. He had a single and was hit by two pitches against Helena.

In all, Murfitt had reached base in each of his first six times at the plate before Helena pitcher Hunter Kirkpatrick induced him to ground out in the fourth inning Sunday to snap the streak.

For a proud program trying to win its first state title since 2007, Murfitt has been the spark plug.

“I just try to get on any way I can. I’m just trying to get on no matter what,” Murfitt said. “If we have base runners on, we have the guys that are just going to hit the ball, make plays, or hit the ball hard enough where the other team is going to be making errors. That’s been a highlight of our team so far.”

Bozeman clung to a one-run lead against Helena before scoring five times in the fifth. Murfitt was hit by a pitch with the bases loaded, and he later scored. Michael Freund’s two-run single with two outs was a key hit.

Sixth-seeded Helena scored twice in the fourth on an RBI single by Brady Anderson and a sacrifice fly off the bat of Zach Spiroff, but the Senators were otherwise were held in check by three Bozeman pitchers. The defensive play of the day was made by Bucks third baseman Preston Fliehman, who made a diving stab to his right, popped up and threw a strike to first to retire Anderson in the sixth.

Bozeman has won just one state championship but likes the position it’s in. And the Bucks hope recent history doesn’t repeat itself.

“It’s just this whole thing of Bozeman always choking,” said Murfitt, who also had six defensive putouts in center. “We took second in 2017, and that one was a tough pill to swallow. And last year, that’s what’s really been on our mind. We went in No. 1 and it left a really sour taste in our mouths.

“That’s what we’ve been focusing on the last half of our season, preparation for this tournament.”

Kalispell fought back to tie the game with one run in the bottom of the seventh, but the Billings Scarlets scored twice in the eighth to prevail 6-4 in a loser-out contest.

The No. 7-seeded Scarlets will play Missoula on Monday at 4 p.m. No. 3 Kalispell was the first team eliminated.

Ryan Symmes had two RBIs for the Lakers, while Randy Stultz had two hits.

Nathan Reiter pitched six scoreless innings to lead No. 4 Lethbridge to a 6-0 win-or-go-home victory over eighth-seeded Great Falls. The Elks advanced to face Helena on Monday at 1.

Reiter gave up three hits and allowed four walks while striking out two. Zach Trempner pitched the seventh inning in relief to close out the game for Lethbridge.

Offensively, the Elks were led by Skylar Braun, who tripled and drove in two runs. Levi Abbot had two hits and an RBI.

Keeton Clark had two of Great Falls' five hits in the Chargers' final game of the season.

Bozeman and Helena play in a second-round game at the Class AA state Legion tournament at Dehler Park on Sunday.

BILLINGS — Two years ago, the Bozeman Bucks put a stuffed buck head in their locker room. This season, they decided to bring the lifeless, ant…