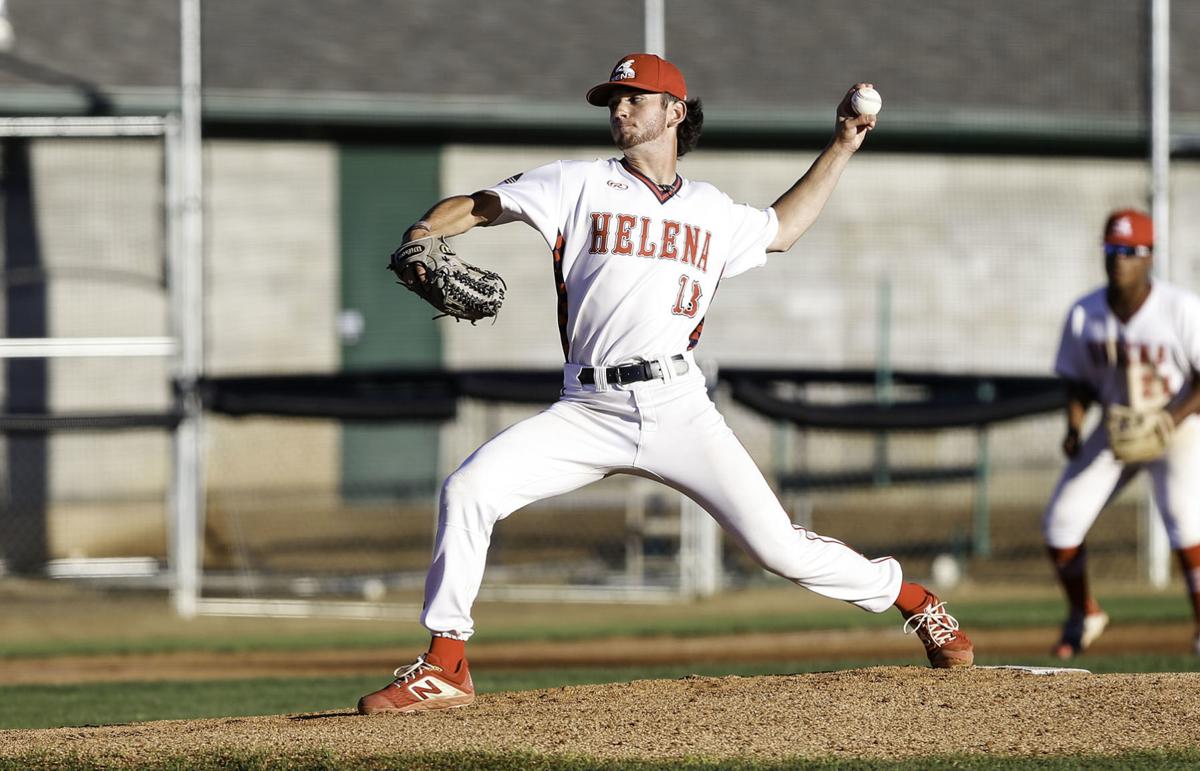 Cy Miller delivers a pitch against Yakima in the second inning of the Keith Sell Tournament in Helena. 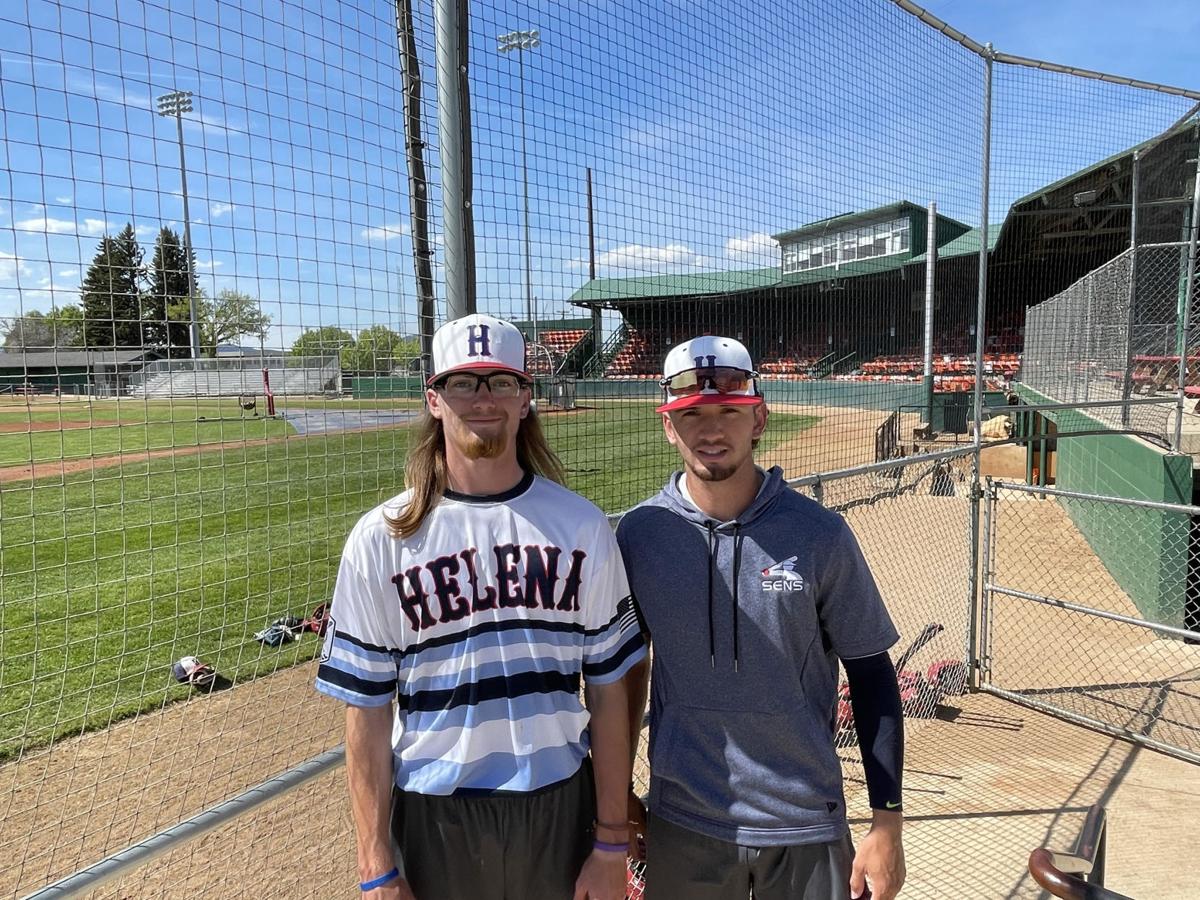 Ethan Keintz (left) and Cy Miller (right) get ready to hit BP on Tuesday at Kindrick Legion Field in Helena.

HELENA — The same Montana spring weather that forced Helena Senators games to be canceled two weeks ago due to rain and snow, pushed temperatures into the 80’s for batting practice on Tuesday at Kindrick Legion Field.

Temperatures are expected to reach the upper 80’s and possibly 90 degrees when the Senators open conference play on Wednesday in Bozeman. Winners of 12 of their last 14 games, Helena is just as hot as the weather.

“We’re still kinda working towards some things,” Senators head coach Jon Burnett said. “It’s a process. We definitely want to play good ball in conference but definitely peak around the end of July when the state tournament rolls around. We think we’re in a good spot, we’ve played pretty good the last week. Excited to play some games that count.”

As part of the Missoula Memorial Day Tournament, the Senators reeled off five victories in three days and will take a six-game winning streak into conference action. Helena scored 60 runs to claim the tournament, and with back-to-back doubleheaders over the weekend, exercised some depth that will be important for the summer months.

“It was good for us because we had to use our pitching depth,” Burnett said. “With conference games coming up, our guys were on pitch counts and we had to use the bullpen. We got some great outings out of the bullpen. Cade Coate did awesome for us [Monday] in the championship game, Matt Burton threw pretty much a complete game —  6.2 innings — the day before.”

Both were important to the Senators’ run into the state title game last season with Miller pacing the team in innings pitched and sporting a sub-3.00 ERA, while Keintz excelled as a two-way standout.

“They’re great baseball players,” Burnett said. “Having Ethan hit in that front part of our lineup is huge for us. He’s a guy that’s a high on-base guy, puts the ball in play a lot. The other thing I like is just the leadership that they bring to the team. They’ve been playing varsity baseball for three years now. They show the guys how it happens at college and bring that kind of professional mentality to it.”

After a year with Pacific Lutheran University, Keintz has been plugged back into the Senators’ lineup and is performing like he never left. In six games, he is slashing .684/.778/1.053/1.830 with 11 RBI and five extra-base hits. Keintz has not struck out in 27 plate appearances.

“Just having the opportunity to have consistent playing time back here,” Keintz said of his success. “Then just really trying to have fun this year, not trying to take things too seriously and live and die by every at-bat. Just have fun with it. I think that’s helping me play the way I’ve been playing.”

Some time playing at the next level has helped Keintz with some stuff approach-wise at the plate as well as to clean up his swing. It is from that experience learning from older guys at the collegiate level that Keintz can turn around and help some of the younger guys on Helena’s roster.

“I think a lot of guys look up to me and I think it’s my job to help them and try to be one of the guys that doesn’t get out of control when things go bad,” Keintz said. “Just help the team whenever I can.”

Miller is getting the same opportunity with the Senators’ pitching staff. Guys like Eamon Burke and Tyler Tenney have anchored the staff in Miller’s absence, and with one year of legion ball left, the southpaw is attempting to groom guys for future leadership roles.

“It’s really fun,” Miller said of being back with the Senators. “Just getting that opportunity to play another year with these younger guys and trying to get to learn how they are and show them what I learned at college. Try to teach them some new things.”

In 17 appearances for Miles City Community College, Miller amassed a 3.51 ERA in 33.1 innings pitched. As a freshman, he struck out 48 batters, averaging nearly 13 punch outs per nine innings. In his first start for the Senators, Miller tossed 4.2 innings and allowed five runs (four earned) while striking out five.

Through 23 games, the Senators have used 17 different pitchers to soak up 155.1 innings, a group that has worked to the tune of a 4.51 ERA. While that ERA may be a bit elevated, Helena’s pitchers have struck out 127 batters against just 89 walks, numbers that will likely only benefit from a strike-thrower like Miller returning to the mix.

“I’ve seen a lot of guys that grind out innings and throw really well,” Miller said. “They use their off-speed well, too. Just a lot of young guys and a lot of depth. Everybody is going to get their shot and taking what they can from it.”

While the pitching staff continues its overall solid showing, in this 12-2 stretch, the Senators have scored 10-plus runs nine times, including in four-straight games last week. Having Keintz back in the lineup certainly helped, but some timely hitting from an advantageous offense has worked wonders.

“It’s going to be a competitive conference and state, for sure,” Burnett said. “Haven’t seen the Billings squads yet, but they’re always very solid. I think we can compete with anybody, but at the same time, I think we could lose to anybody if we don’t play our best game.”

The Senators will open their conference slate on Wednesday with a doubleheader against the Bozeman Bucks on the road. First pitches are currently scheduled for 6 and 8:30 p.m. Helena is slated to be back home next Tuesday against Great Falls.