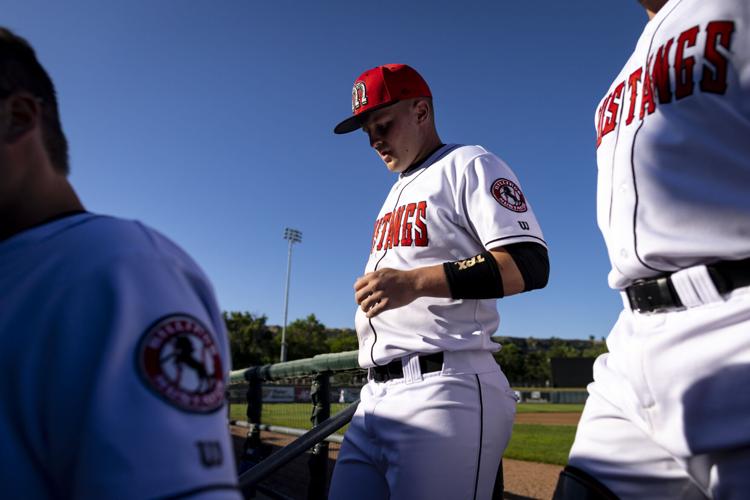 Billings Mustangs infielder Jackson Raper heads to the dugout after the National Anthem prior to Tuesday's game against the Great Falls Voyagers at Dehler Park. 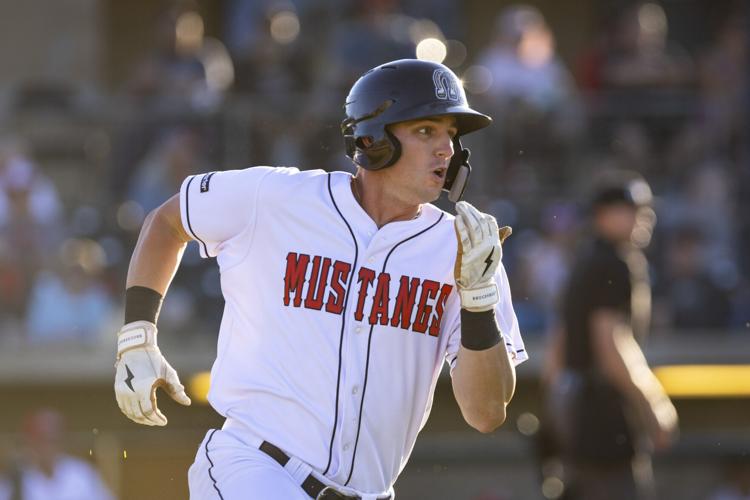 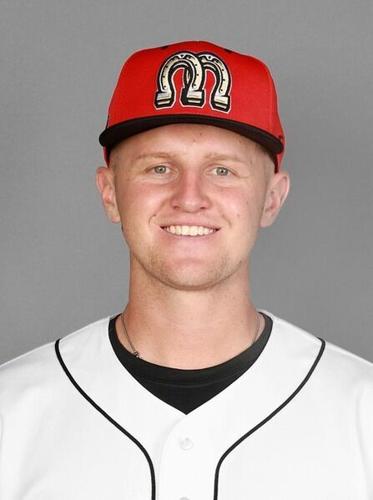 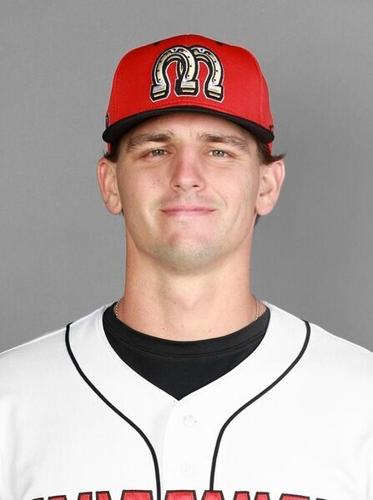 Billings Mustangs infielder Jackson Raper heads to the dugout after the National Anthem prior to Tuesday's game against the Great Falls Voyagers at Dehler Park.

BILLINGS — Ask Jackson Raper and Gabe Wurtz separately whether they’ve noticed how eerily similar to one another their Pioneer League first-half stats are, and you get a similar answer.

“A little bit,” Raper responded with a bit of a sly smile on his face.

“I noticed ours were pretty similar,” Wurtz acknowledged a few minutes later. “I keep up with it occasionally.”

The consistent contributions of Raper and Wurtz, along with team leader Jalen Garcia, are a big reason the Mustangs finished the first half of the season second in the league in home runs (56) and third in slugging percentage (.486).

And they’ll likely have to improve those numbers — or at least maintain them — if the Mustangs want to have any hope of reeling in the Missoula PaddleHeads, who have proven to be the bane of every other team’s existence in the season-and-a-half of the now-independent Pioneer League.

Wurtz and Raper, who often follow one another in the lineup, have nearly duplicate stats across the board. Both played in 44 games and had 166 at-bats in the first half. Wurtz had scored 36 runs to Raper’s 33; Raper has 51 hits to Wurtz’s 50; Raper has 12 doubles, six triples and nine home runs to Wurtz’s 16-0-12.

“I think Jackson is a great player, honestly, I love his swing,” said Wurtz, a 6-foot-4, 230-pound right-handed hitting outfielder who has also played some first base. “I wish I was left-handed, he’s blessed.”

“Gabe’s had great power numbers everywhere he goes, he knows how to drive the ball,” countered Raper, a 6-foot infielder. “He’s really good with runners in scoring position. I think he just doesn’t really let any moment get too big for him.”

On paper it might seem that they’re the same player, but the paths Wurtz and Raper took to the Mustangs have been different.

Raper played for the Great Falls Voyagers last season after graduating from the University of Illinois. He played one season with the Fighting Illini and was named All-Big Ten by hitting .311 with 13 homers and 44 RBIs. (Raper played four seasons with NCAA Division II Catawba College in North Carolina before transferring to Illinois).

With the Voyagers, he hit 10 home runs and drove in 34 runs in 35 games, batting .316 along the way. So his production with the Mustangs hasn’t been a surprise, and it points to the consistency in his approach. Even a late signing — he didn’t join the Mustangs until May 16, less than 10 days before the start of the season, after a potential deal with another club fell through — didn’t knock Raper off his game.

“It was a quick turnaround,” Raper said. “I just had a couple days to get out here and get settled. Luckily, we had a spring training, so that kind of helped. I mean, it’s one of those things where you can sit there and sulk that things didn’t work out how you wanted it to, or you can just move on.”

Wurtz spent last summer playing for the Tucson Saguaros of the independent Pecos League, joining the club following threes seasons at NCAA Division II University of Virginia-Wise. After helping the Saguaros to the league title by batting .414 with 22 homers and 86 RBIs, Wurtz joined the Houston Apollos of the American Association.

The Apollos were a traveling-only team to give the league a balanced 12-team field. In the two weeks he was with the Apollos, Wurtz found himself playing in Sioux City, Iowa; Kansas City; Cleburne, Texas; and finally Lincoln, Nebraska.

“I just feel like we have the best coaching staff,” Wurtz said. “There’s just so much knowledge, you can go to them anytime to talk and sometimes they just come to you and tell you what you need to hear.”

The second half of the season began Tuesday against Raper’s old team, the Voyagers, at Dehler Park. The quest to chase down the PaddleHeads, who won the North division title wire-to-wire and the league championship last season, has 47 more games to go. Billings finished 25-21 in the first half, 9½ games behind the PaddleHeads.

Wurtz and Raper will have to be at the center of that chase. But they think it can be done.

“We have a good, cohesive unit going now,” Raper concluded. “So we just need to win as many games as possible to get us into the playoffs, and then just strap it on, have some playoff baseball, and go win it.”

A veteran of 13 major league seasons, the desire to manage is what brought Riggleman to the Pioneer League.

Montana Grizzlies are staying in the Big Sky — for now, and AD Kent Haslam explains why