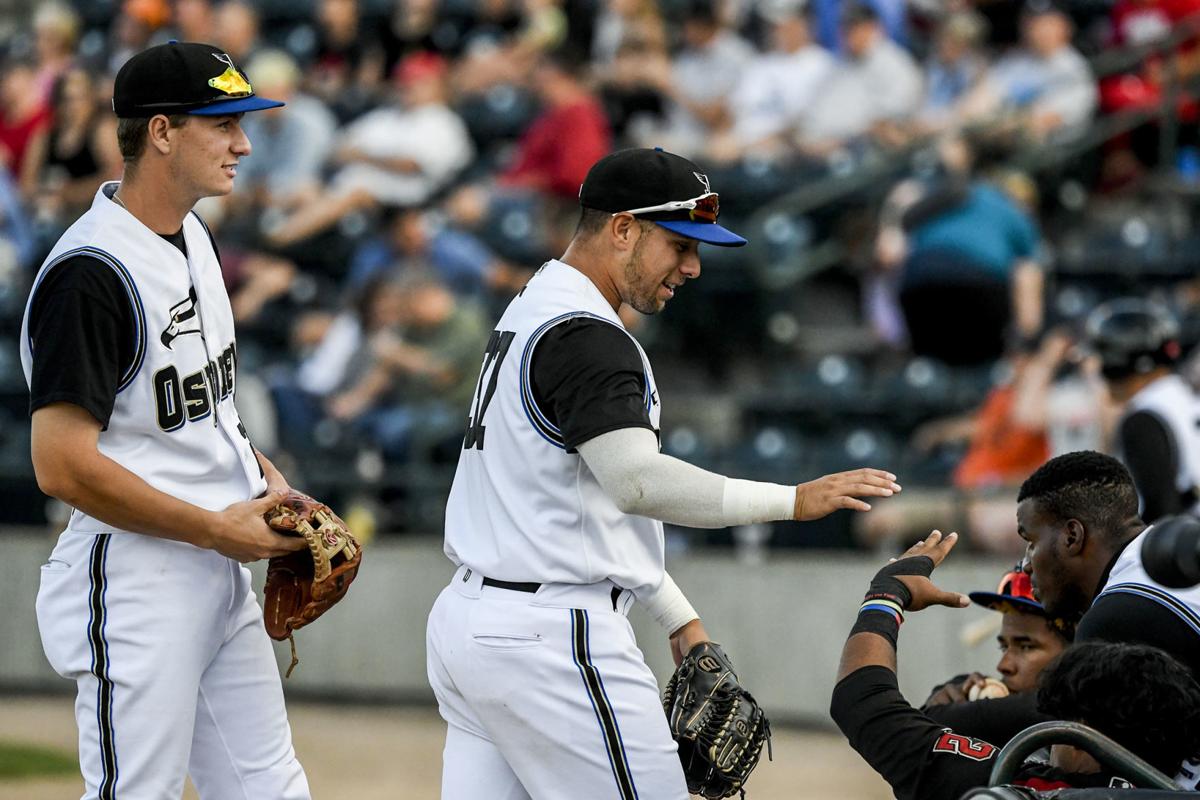 Osprey outfielder Tristen Carranza, middle, high fives teammates walking into the dugout during Thursday's game against the Orem Owlz at Ogren-Allegiance Park. Carranza hit a home run in helping lift the O's to a 4-3 win. 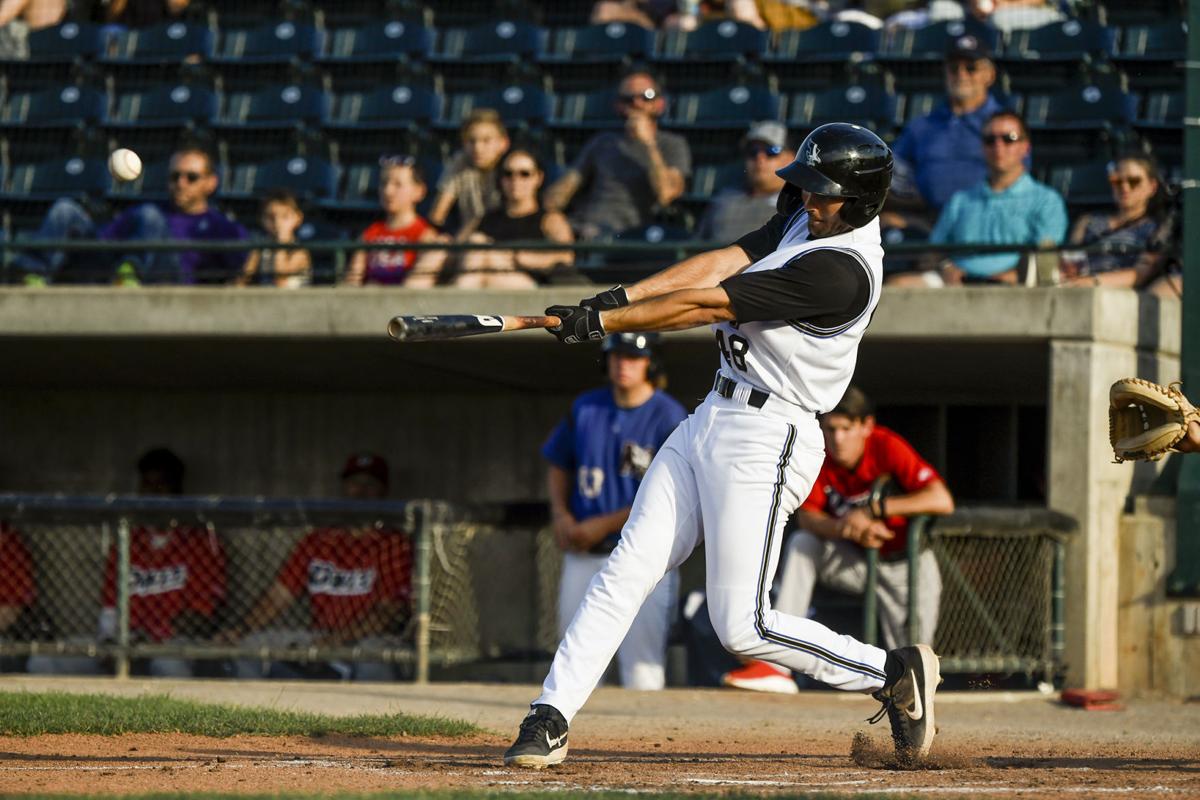 Missoula's Dominic Canzone lines a shot into the outfield during Thursday's game. He picked up an RBI in an Osprey win. 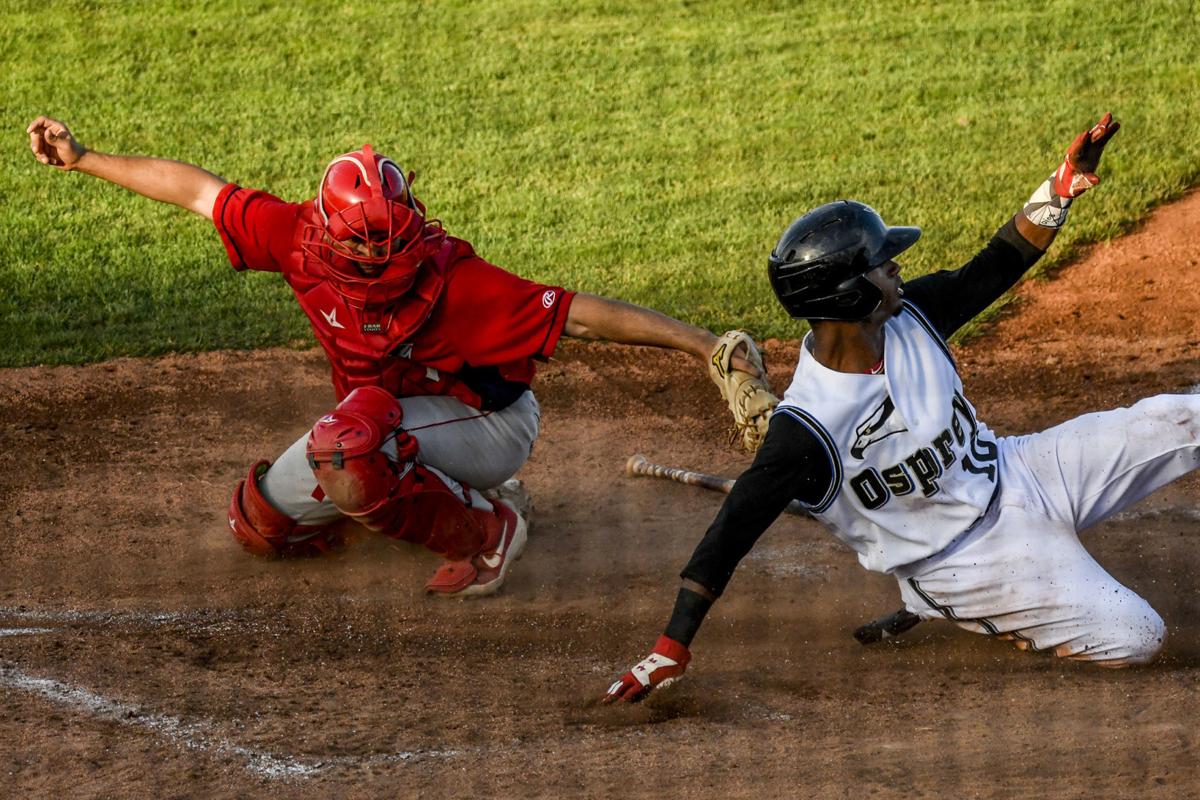 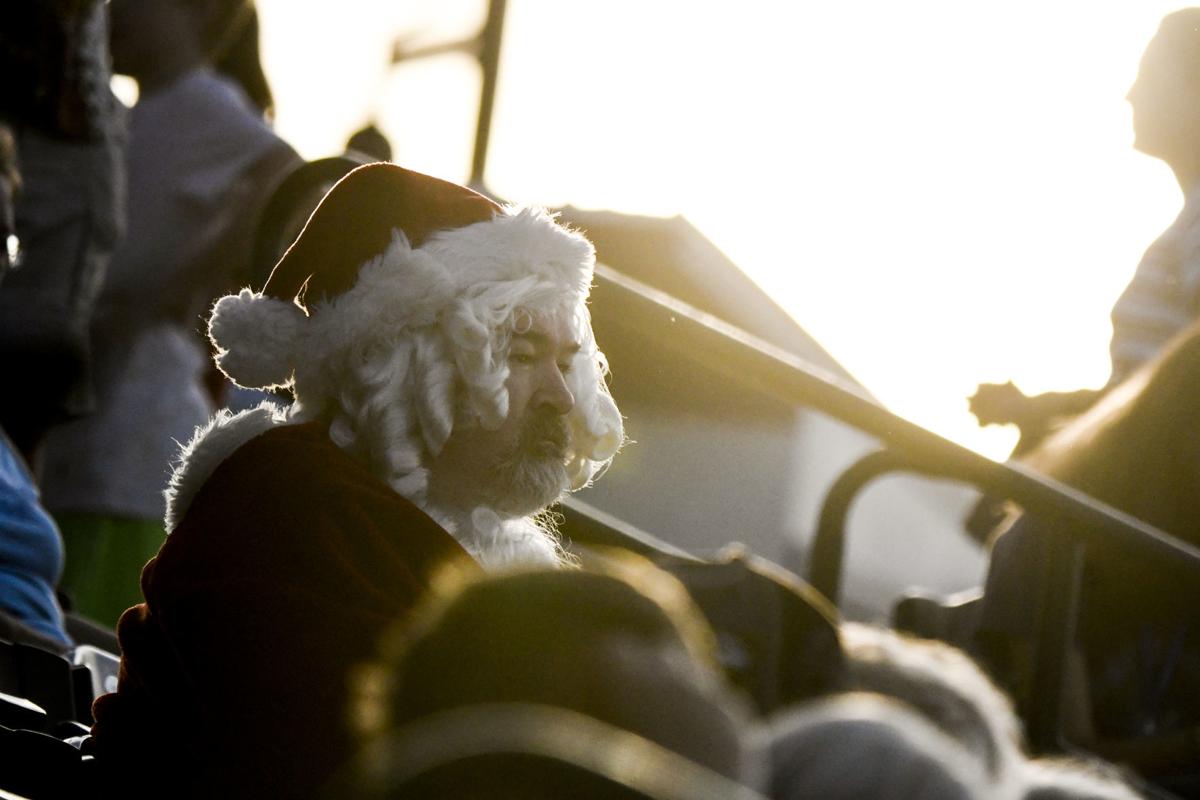 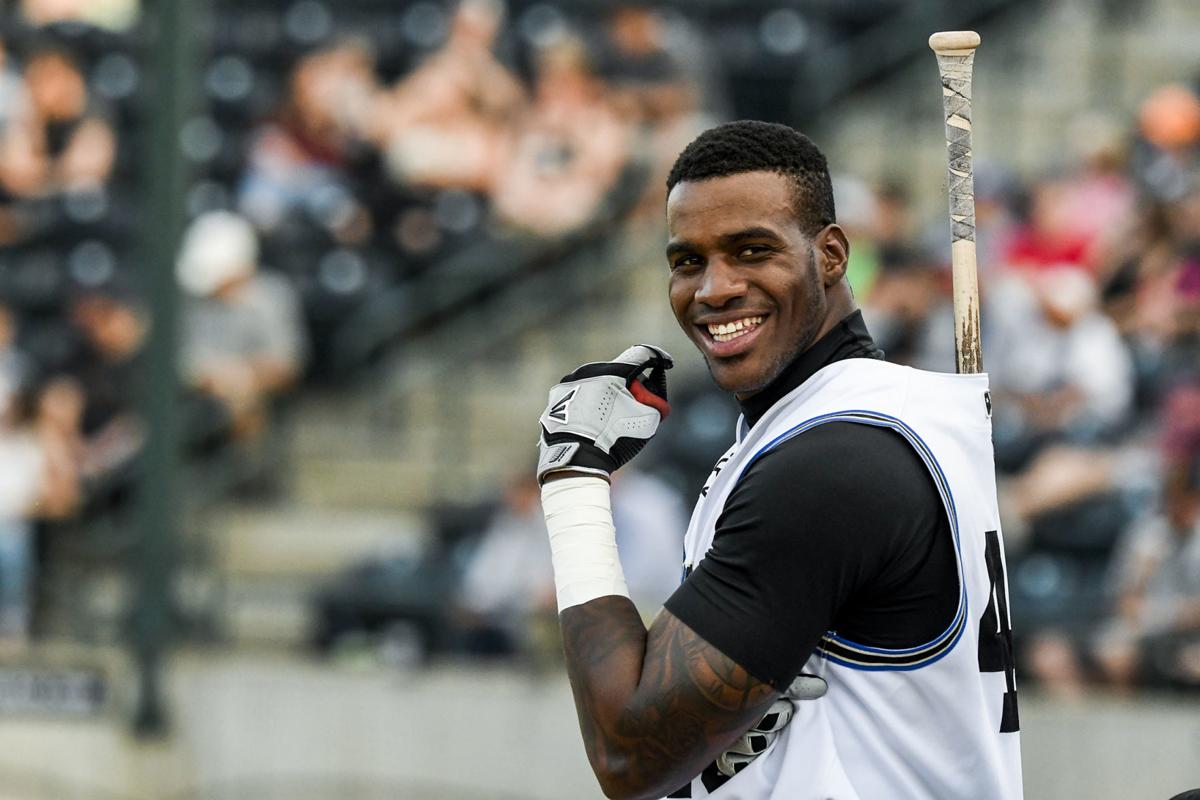 Osprey infielder Francis Martinez (45) stands in the dugout with a bat inside his jersey during the baseball game between the Missoula Osprey and Orem Owls at Ogren-Allegiance Park on Thursday night.

Osprey outfielder Tristen Carranza, middle, high fives teammates walking into the dugout during Thursday's game against the Orem Owlz at Ogren-Allegiance Park. Carranza hit a home run in helping lift the O's to a 4-3 win.

Missoula's Dominic Canzone lines a shot into the outfield during Thursday's game. He picked up an RBI in an Osprey win.

Osprey infielder Francis Martinez (45) stands in the dugout with a bat inside his jersey during the baseball game between the Missoula Osprey and Orem Owls at Ogren-Allegiance Park on Thursday night.

MISSOULA — It was a month ago this week that Tristen Carranza hit his all-time low as a baseball player.

For two years in a row he had waited anxiously for the call that never came. The call verifying he was selected in the Major League Draft.

"It really hurt me, and once the (2019) draft was over I thought I was done playing baseball," said the outfielder, who smacked a home run in Thursday's 4-3 home win over the Orem Owlz. "My dreams were crushed and it was a depressing day for me."

The Arizona Diamondbacks pumped new life into Carranza's baseball career when they picked him up as a free agent on the second weekend in June. He came to the Osprey with a chip on his shoulder and, after a slow start, has worked hard to become one of the most reliable, productive hitters on the team.

"All I needed was a shot," said the Californian, who has reached base in 21 of his last 22 games. "Hopefully I can make the best out of it."

Carranza freely admits that his first eight games with the Osprey were rough. He was 3 for 21 and struck out nine times.

"I just wasn't having fun," he related. "I was too worried about external factors I shouldn't be worried about.

Carranza has turned it around in a big way. He has notched a hit in 13 of his last 14 games and delivered arguably the biggest hit of the season on July 3 — a walk-off RBI double that electrified a home crowd of over 4,000 fans.

"When they walked (teammate) Cesar (Garcia) to get to me, I went up to the plate saying, 'Well that's a mistake,'" Carranza said. "I proved them wrong."

The son of Pedro Carranza, who played in the Pioneer League back when there was a team in Pocatello, Idaho, had another memorable moment in Wednesday's home win over Orem. He hit his first home run in the seventh inning.

"It was just a long time coming," said Carranza, who helped lead New Mexico State to its first WAC baseball title in 2018. "I had been hitting balls hard. To finally see one go over the fence meant a lot."

Carranza had two hits in the first three innings Thursday. The second was his second opposite-field home run in as many nights. That came in the third frame, following a two-run opposite-field blast by teammate Francis Martinez in the second inning.

Missoula starting pitcher Tyler Poulin (2-1) was impressive early. The former Quinnipiac University standout did not allow a hit and struck out four in the first four frames.

Missoula (14-11) scored its fourth run in the fourth when Liover Peguero hit a leadoff triple and scored on a ground out. The Owlz (8-17) broke up Poulin's no hitter in the fifth when Jose Verrier hit a solo home run.

Denson Hull came on in relief for the hosts in the sixth inning. He surrendered solo home runs to Adrian Rondon and Johan Sala in the seventh as the Owlz cut their derficit to 4-3.

Missoula manager Juan Francia went to his closer, Mailon Arroyo, after Orem put a runner on with one out in the eighth. Dominic Canzone made a diving catch in center field for the second out and Arroyo ended the inning with a strikeout.

Arroyo struck out two and coaxed an infield pop-up in the ninth in picking up his fifth save.

Notes: Missoula went into Thursday's game trailing first-place Idaho Falls by just two games in the Pioneer League North Division. The Chukars trailed Ogden 10-3 at press time ... There are 13 games remaining in the first half of the league schedule ... Carranza was the only Osprey with multiple hits Thursday (2) ... Missoula collected six hits to Orem's five ... The attendance for Thursday's game was 1,642.