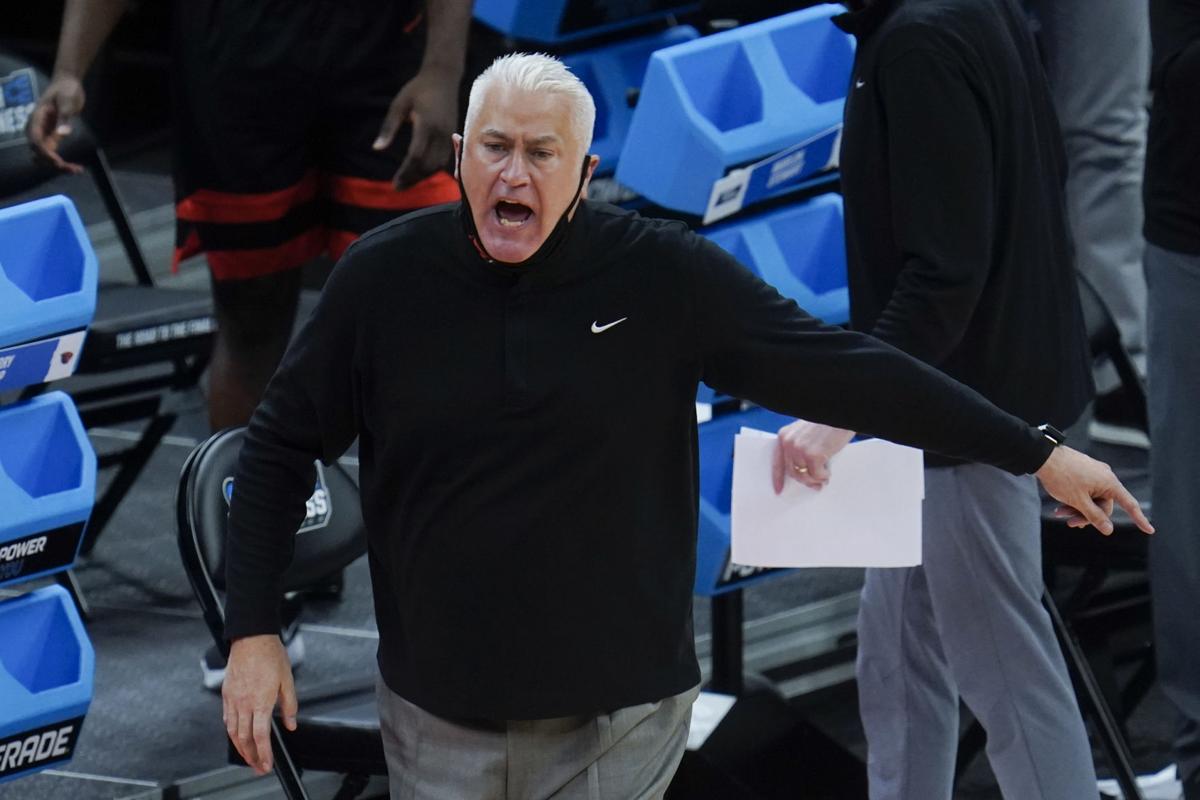 Oregon State Wayne Tinkle, who played and coached at the University of Montana, gives instructions during Friday's game against Tennessee in Indianapolis. The Beavers won, 70-56. 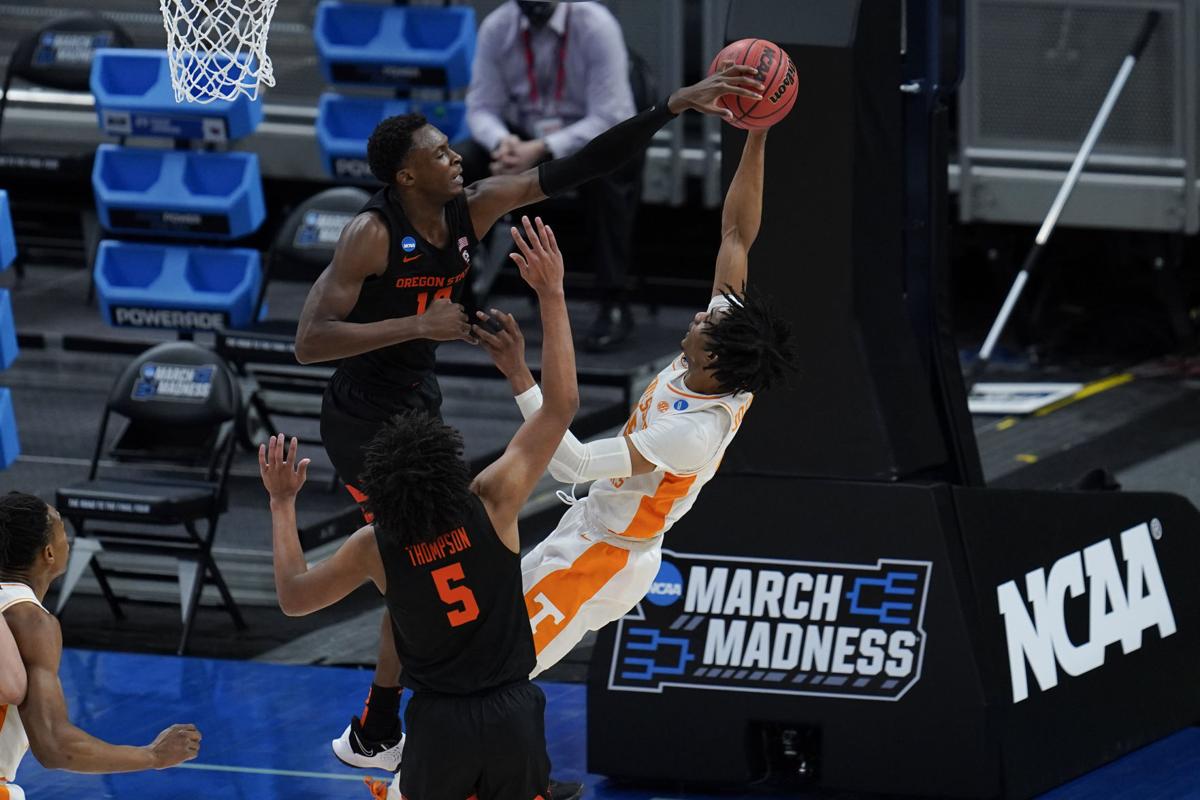 Oregon State Wayne Tinkle, who played and coached at the University of Montana, gives instructions during Friday's game against Tennessee in Indianapolis. The Beavers won, 70-56.

INDIANAPOLIS — Oregon State opened the season picked to finish 12th in its conference but instead won its first Pac-12 Tournament title. The Beavers faced another No. 12 hurdle in the NCAA Tournament and pulled off the upset.

They're certainly enjoying this underdog role.

"In the preseason, when we saw we were picked 12, it really lit a fire under us," said Silva, who made all eight of his shots.

Oregon State (18-12) was the first Pac-10/12 school to win the conference tournament after being picked to finish last. After another upset, the Beavers are the 51st 12th-seed to take down a fifth-seed since the NCAA Tournament bracket expanded in 1985.

The 7-foot-1 Silva bulled his way through the Vols after struggling in the Pac-12 Tournament to help Oregon State build a 14-point halftime lead. The Beavers then hit seven 3s in the second half to hold off a late charge and win their first NCAA Tournament game since reaching the 1982 Elite Eight.

Oregon State moves on to face the winner between Oklahoma State and Liberty on Sunday.

It is quite the run for a team that struggled with injuries early and lost by 34 to Arizona in mid January.

"We know there was some doubt and we had to ignore all that," Oregon State coach Wayne Tinkle said. "We never threw in the towel, we never doubted ourselves, we just do what we do."

John Fulkerson was out with a facial fracture and concussion caused by a pair of elbows by Florida's Omar Payne in the SEC Tournament.

Tennessee could have used the extra shooting help from its fifth-year senior — or anyone, really — as the Vols finished 5 for 26 from the arc while shooting 33% overall.

The Vols caused Oregon State some problems with their press and hit a few shots down the stretch to pull within 10, but started the rally too late.

Now, a team ranked in the top-10 earlier this season is headed home early in a surprise between two programs that started the year on opposite ends of the projection spectrum.

"That was the problem with our team, if you look at our team all year, it was the inconsistency, not really knowing from game to game what we were going to get," Vols coach Rick Barnes said. "That's the most disappointing thing because to be a championship-caliber team you've got to be more consistent."

Tennessee was picked to win the SEC and looked like the favorites while winning its first seven games. The Vols had an uneven rest of the season, ending with a loss to No. 6 Alabama in the SEC Tournament semifinals without Fulkerson.

Oregon State was picked to finish last in the Pac-12 and exceeded expectations by finishing sixth in the regular season. The Beavers took it a step farther by beating rival Oregon to win their first conference title.

Oregon State rolled its underdog role right into Bankers Life Fieldhouse, throwing the Vols into an offensive funk while building a 19-point lead.

Tennessee had little flow to its offense, its half-court sets filled with lots of dribbling and casting up 3-pointers — making few.

"I was really surprised, the freshmen especially," Barnes said of Tennessee's start. "The NCAA Tournament is probably something they've grown up watching. They were out of character in terms of you could tell they were skittish, no doubt about it."

Tennessee shot marginally better in the second half, but Oregon State went 7 for 13 from the arc to stifle the comeback bid.

Johnson led the Vols with 14 points.

Oregon State embraced being underdogs all season and didn't back down against a team that reached No. 6 in the AP Top 25 earlier this season.

Tennessee's inconsistent shooting hit a low note at the wrong time, sending the Vols out of the bracket after reaching the Sweet 16 the last time the NCAA Tournament was held.

Oregon State had a good flow to its offense — at least until Tennessee went to a full-court press late - moving the ball well to get open shots.

The Beavers shot 48% against the athletic Vols and had 20 assists on 27 field goals.

"We really have come together as a team and you saw it on display," Tinkle said.

Oregon State will play the winner between Oklahoma State and Liberty on Sunday.

Tennessee heads home early from what was expected to be a deep March run.

Former Montana player, coach Wayne Tinkle is dancing into the Sweet 16 of the NCAA men's basketball tournament with Oregon State.