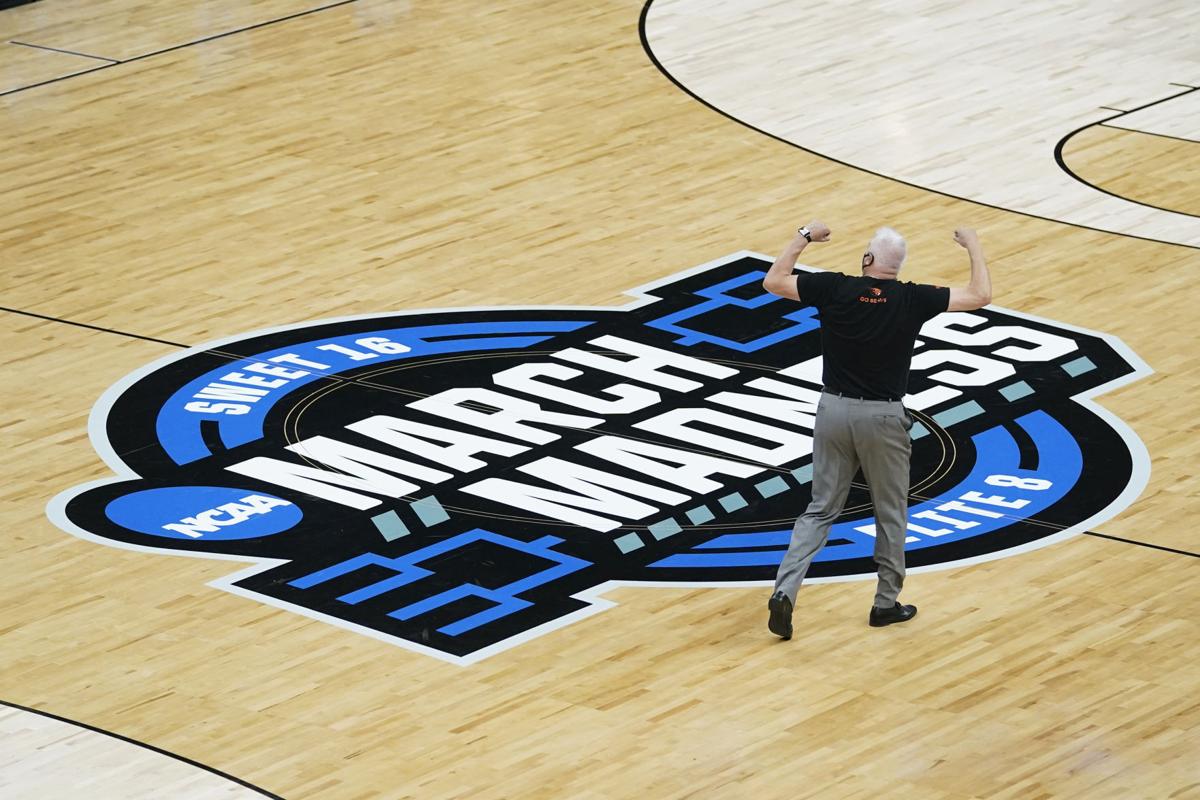 Oregon State coach Wayne Tinkle, a former Montana player and coach,  celebrates as he walks off the court after a Sweet 16 game against Loyola Chicago Saturday in Indianapolis. Oregon State won, 65-58. 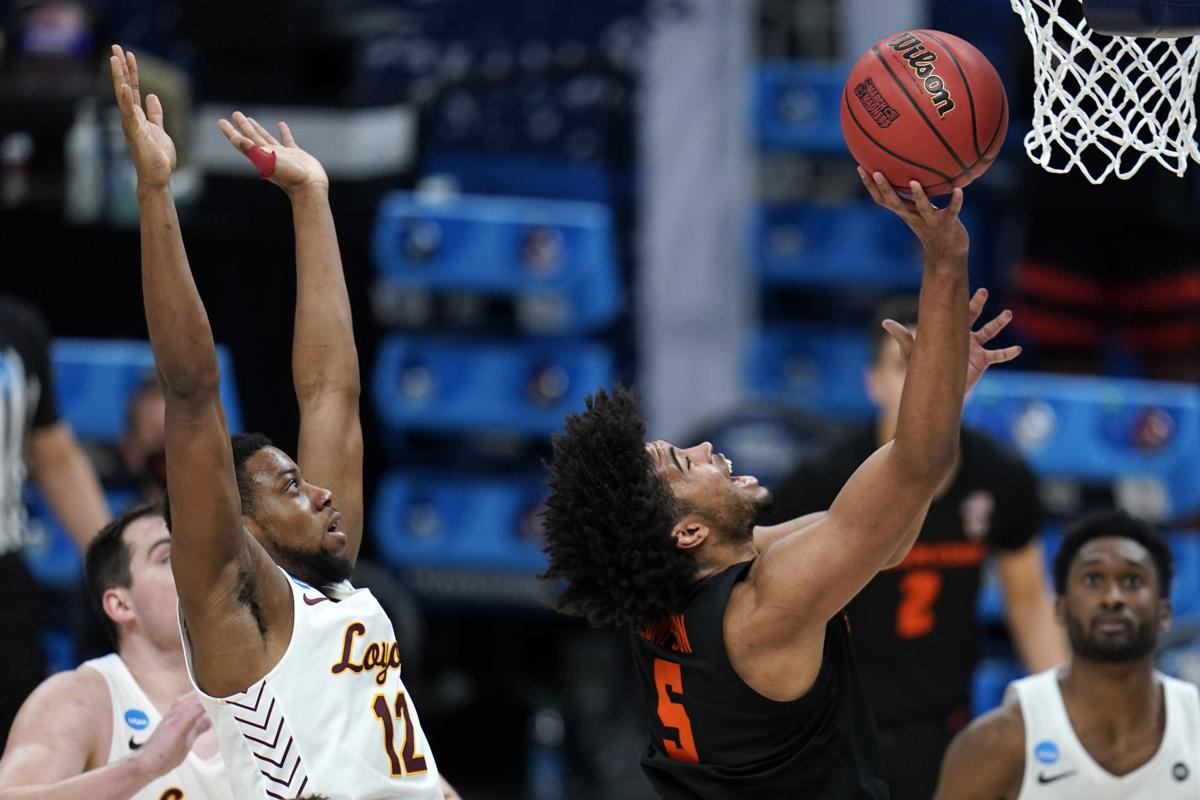 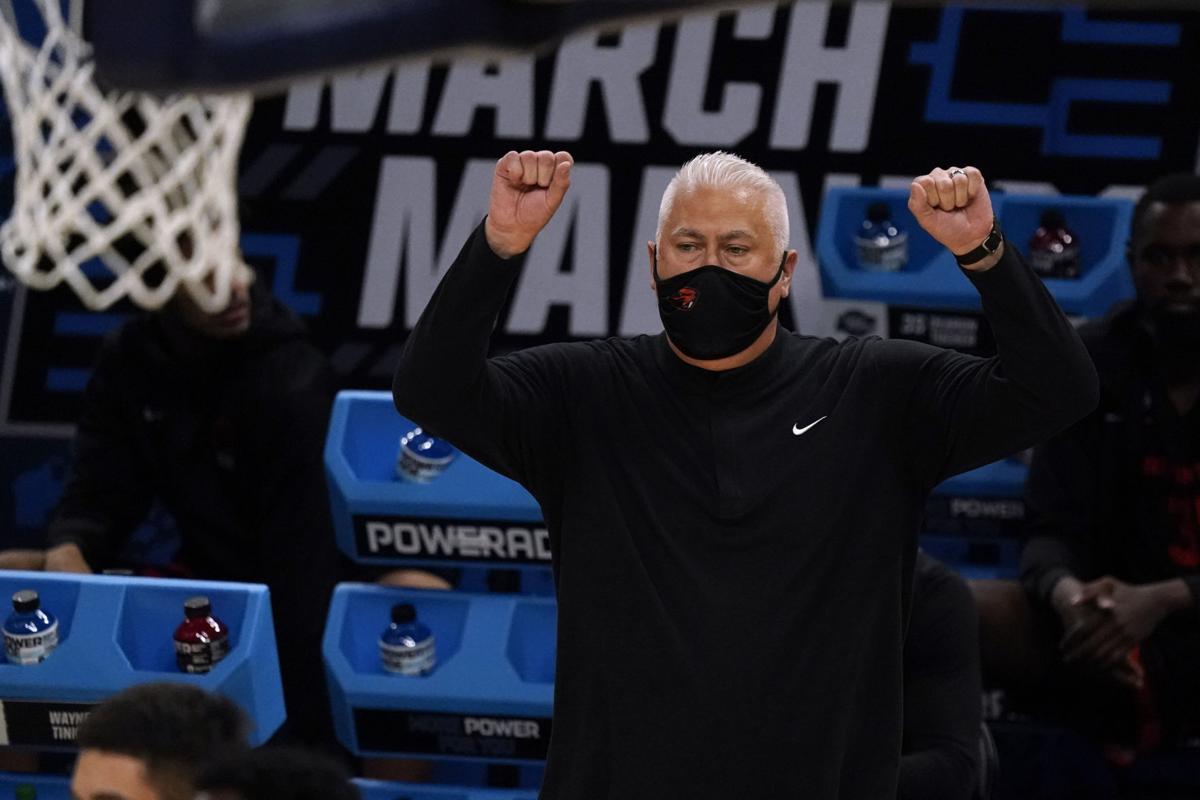 Oregon State coach Wayne Tinkle, a former Montana player and coach, reacts during the first half of a Sweet 16 game against Loyola Chicago Saturday in Indianapolis. The Beavers won. 65-58.

Oregon State coach Wayne Tinkle, a former Montana player and coach,  celebrates as he walks off the court after a Sweet 16 game against Loyola Chicago Saturday in Indianapolis. Oregon State won, 65-58.

Oregon State coach Wayne Tinkle, a former Montana player and coach, reacts during the first half of a Sweet 16 game against Loyola Chicago Saturday in Indianapolis. The Beavers won. 65-58.

INDIANAPOLIS — Picked to finish dead last in the Pac-12, Oregon State instead might be the last one standing.

Led by unflappable guard Ethan Thompson, whose 20 points included a pair of clinching foul shots with 35 seconds left, the No. 12 seed Beavers and their brilliant defense shut down eighth-seeded Loyola Chicago in a 65-58 victory on Saturday that sent their long-suffering program into the Elite Eight of the NCAA Tournament.

It's Oregon State's first regional final since 1982 — one that was later vacated by the NCAA — and sets up a showdown with second-seeded Houston or No. 10 seed Syracuse on Monday night for a spot in its first Final Four since 1963.

"They just want to keep riding the wave," said Beavers coach Wayne Tinkle, whose hungry bunch of underdogs have matched Missouri in 2002 as the lowest-seeded teams to advance past the Sweet 16.

"We did use the fact we were picked 12th in the Pac-12 this year," Tinkle added, "but we haven't made a big deal about the 12th seed. I don't want to throw too much at them. They'll see it. We just have to keep our feet on the ground."

That's getting harder to do with each passing day.

"There's no doubt in our guys minds. They really believe this is their time"

Not even the fervent prayers of Sister Jean Dolores Schmidt could help Loyola deal with the Beavers (20-12) and the constantly changing defenses that Tinkle rolled out. The Ramblers (26-5), who played with such poise and perfection in toppling top-seeded Illinois, wound up shooting 33% from the field and 5 of 23 from beyond the arc.

All-America forward Cameron Krutwig led Loyola with 14 points. Lucas Williamson and Braden Norris added 10 apiece, though both of them missed 3-pointers in the closing minutes as Loyola tried to mount a comeback.

"Very hard scene in our locker room," said Ramblers coach Porter Moser, whose name has surfaced in connection with several major conference jobs. "Kids cared so much, invested so much. Very tough when it comes to an end."

It was the second meeting between the teams and first since Dec. 31, 1927, when Loyola won 31-19 in Chicago — and Sister Jean, the Ramblers' beloved 101-year-old chaplain, was still just a schoolgirl.

And for most of Saturday, it looked as if 31 points would be plenty.

Oregon State turned it over twice before getting off a shot, went nearly 6 1/2 minutes before making its first field goal and at one point was 1 of 8 with four turnovers. Then the Ramblers, who failed to take advantage of their defense, proceeded to miss 11 consecutive shots as Oregon State flip-flopped between man-to-man and zone defenses.

"We kind of let them slow us down a little bit," Krutwig said. "Honestly, we got a lot of good looks."

The Beavers wound up shutting out Loyola the last 5:48 to take a 24-16 halftime lead, the lowest-scoring first half of the entire tournament. Krutwig was 3 of 5 from the field; the rest of the Ramblers were 1 of 18.

You'd have sworn the Beavers sported the nation's No. 1 scoring defense, not the other way around.

Oregon State built on Warith Alatishe's buzzer-beating bucket to end the first half by getting some shots to go in the second. Thompson did most of the damage, hitting an early jumper, beating the shot clock with another fadeaway, then catching a Hail Mary heave to beat a full-court press and give the Beavers a 37-24 lead with 12 minutes to go.

Meanwhile, the Ramblers were hitting everything but the bottom of the bucket.

Williamson rimmed out 3-pointers on back-to-back trips down the floor. Tate Hall clanked a couple of free throws when that was about the only place they were scoring. Krutwig even had a baby hook go halfway down and right back out.

Even when the shots wouldn't fall, Loyola continued to play defense, and that kept the game close. And when Braden Norris knocked down a 3 and Aher Uguak tipped in an ally-oop with 2:43 to go, the Ramblers had trimmed their deficit to 49-44 and had the partisan crowd sitting mostly in the rafters of Bankers Life Fieldhouse cheering.

Kennedy hit a 3-pointer to get the Ramblers within 51-47, then another shot to get within 53-49, but the Beavers kept finding answers. Lucas provided one with a 3, Alatishe provided another from the foul line, and that was enough to keep the Pac-12's dream tournament going into the Elite Eight.

"We're not in charge of the rankings," Thompson said. "You know, the preseason, all of that — all we can control is what we can control. That's going out every night, having fun, giving it our all and trying to win the game. That's it."

Oregon State is making the most of its second NCAA Tournament appearance since 1990. The Beavers had beaten higher-seeded teams in Tennessee and Oklahoma State before knocking off one of the sentimental favorites.

Loyola Chicago was trying to become the first No. 8 seed since Kentucky in 2014 to reach the Elite Eight. But its slow start proved to be too much to overcome. The Ramblers never led the final 35-plus minutes of the game.

The Beavers play the Cougars or the Orange for a spot in the Final Four. Oregon State has never played Syracuse, but it beat Houston in the 1966 West Region semifinal and again in the 2009 CBI Tournament. Both present intriguing matchups.

Houston is led by former Montana Tech coach Kelvin Sampson. Syracuse and coach Jim Boeheim beat Tinkle's Montana Grizzlies, 81-34, in the 2013 first round; it's the most-lopsided loss for a Big Sky team during the conference's current 0-15 slide in NCAA tournament games. Tinkle is a former coach and player at Montana. His son, Tres, played at Missoula Hellgate. His daughters, Joslyn and Elle, played at Missoula Big Sky.

Wayne Tinkle is adding to the Montana Grizzlies' coaching tree legacy with his run to the Sweet 16, and his staff at Oregon State has quite a bit of UM flavor to it.