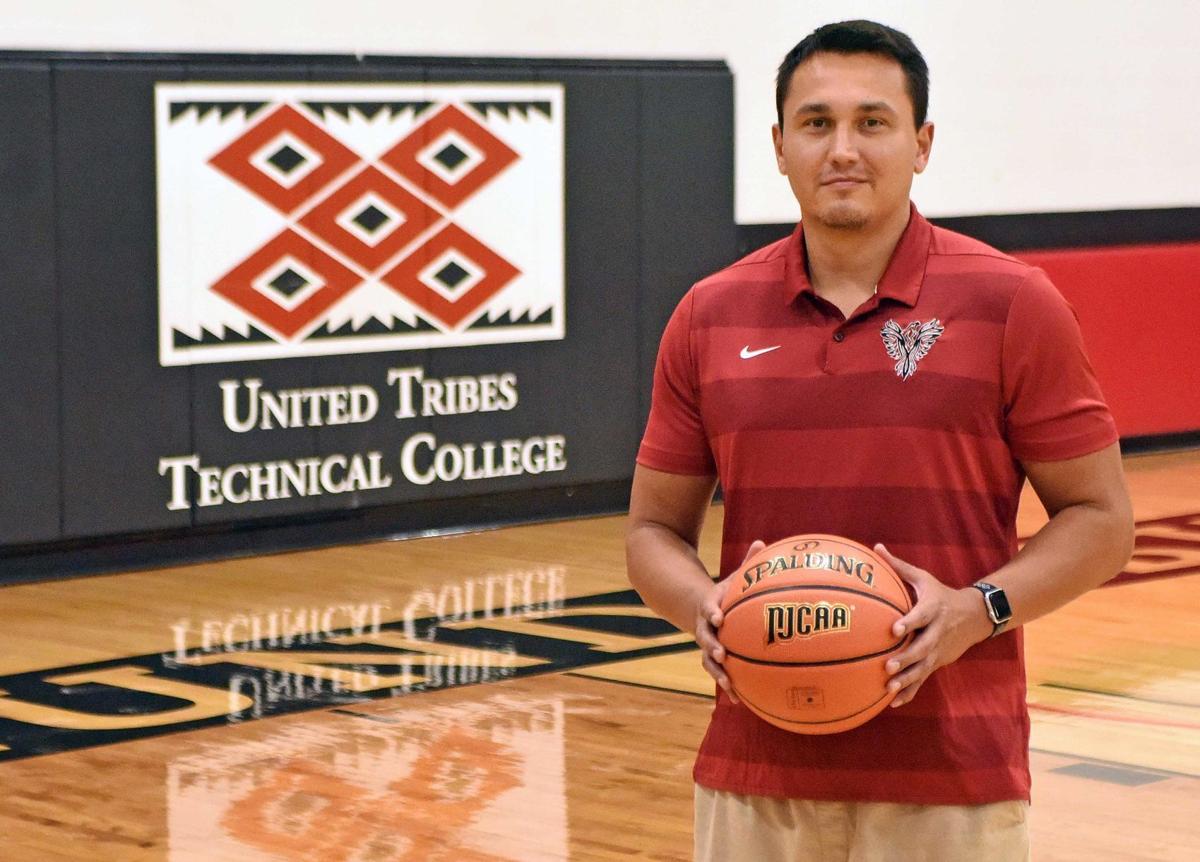 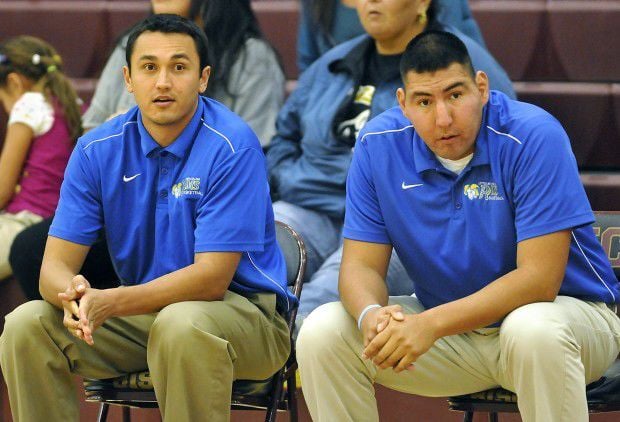 Pete Conway, left, was head coach at Little Big Horn College in Crow Agency for three years. He was assisted by Mike Chavez, right, a high school star at Heart Butte and Browning before moving on to Montana.

Pete Conway, left, was head coach at Little Big Horn College in Crow Agency for three years. He was assisted by Mike Chavez, right, a high school star at Heart Butte and Browning before moving on to Montana.

BILLINGS — Pete Conway was a standout player from a heady era of Montana basketball.

He was a four-year Billings West Golden Bears letterman, the 1998 Montana Gatorade Player of the Year, Mr. Basketball, and 2002 Big Sky Conference champion with Montana State. He is also a Montana Indian Athletic Hall of Fame.

Before coming to UTTC, Conway had a successful three-year tour as head coach for Little Big Horn College, a junior college on the Crow Indian Reservation. Conway made an immediate impact on the program.

Under Conway, the Rams made their first postseason run in the highly competitive Region IX Tournament. He also collected the most wins ever by a LBHC head coach.

At LBHC, Conway helped develop guard Quinton Everett of Lakeland, Florida, into an NCAA Division I prospect for Montana State.

Everett, who earned second-team all-region honors at Little Big Horn in 2013-14, credits Conway for making an impact on his life.

”He gave me a chance to play ball again and also the chance to further my education," he said in a statement when Conway was hired at UTTC. "God placed this man in my life for a reason and I am really grateful to know him. I am able to live out my dreams because he took a chance on me.”

Since his arrival, Conway’s Thunderbirds have had four straight winning seasons and a 71-53 overall record.

Conway, who is Blackfeet, sees opportunity coaching at United Tribes.

“What brought me here to UTTC and LBHC was the opportunity to make a difference in a student-athlete’s life — to provide an opportunity where there might not have been one before," he told the Billings Gazette and 406mtsports.com in a recent interview. “You see a lot of my players don’t get recruitment looks. A lot of colleges aren’t going to the Native (American) schools.

“I see these schools as a valuable resource to get kids into school, play a couple years, and most importantly, get an education. In some cases, my players get an opportunity to continue playing for a four-year school and earn a bachelor’s degree.”

Conway’s own family has deep roots in sports. He credits his oldest sister, Stacy, for setting the standard at home as she competed in varsity sports as a freshman at Class AA Billings West, and his younger sister, Dana, who also found success at West and the University of Montana.

Conway’s parents, Pete and Darcy (Schwend), have both been inducted into the Eastern Montana College (now Montana State Billings) Athletic Hall of Fame.

“The game has changed over the years. I think the main difference has been the shift away from post play,” he said. “It is hard to find guys that will play down on the blocks and in some ways it is harder for players to get any minutes if they can’t shoot the '3' or defend someone who can.”

Play is highly competitive in the Mon-Dak, and as a whole at the National Junior College Athletic Association level, Conway said.

“I have encountered a lot of high school players that think JC is going to be easy. They don’t realize this is going to be some of the toughest competition they will ever experience,” he said. “There are a lot of D-I prospects out there just looking to showcase their abilities and make the grade. Junior-college athletics provide a great environment to do just that.”

“When recruiting, I look for players that will go the extra mile,” he said. “Players that can dig deep in big games and still be coachable. You really can’t substitute the value of hard work with anything else. Though, sometimes I recruit purely on potential. Some players don’t mature for another year or so.”

Conway said the first year of collegiate sports aren’t easy for an athlete. The transition from high school can be a struggle if a player is not ready.

“When I was a redshirt freshman, I had to guard Danny Sprinkle from Helena High School, who is currently the head coach of the Bobcats. Those Helena High guys were tough,” Conway said. “I went from being the star of my school to learning an entirely new system and role. It was hard, but it was OK. It had to be like that if I wanted to be a part of that team or any other. It was like starting all over again.”

Conway and his wife, Melarie, have four children. He emphasizes family structure for his players, saying, “I see the importance of a family environment for students leaving home for the first time.”

He tells his players: “You dorm together, eat together, practice, travel, and compete. You need to represent one another with integrity and respect.”

UTTC’s campus is a home away from home for many students. Conway said it's the perfect host for students away for the first time looking for a family atmosphere.

“The United Tribes campus is a great setting for students that come from smaller locations," he said. "The campus is unique in terms of its setup. It is a community all of its own.”

Conway stresses how critical it is for new students looking for success as a student-athlete to find and maintain balance.

“Being a student-athlete teaches a person a lot about time management,” he said. “Knowing when to put the ball down and pick up their studies. All things in balance. It is a great honor to be a part of a college team and represent your school and have the support of people cheering you on. It is a great way to enjoy the college experience.”

Conway looks on his high school years and big-game scenarios to relate the importance of character defining games.

“Basketball in the '90s was a beast in Montana,” he said. “As a junior, we (West High) played the Hardin 1997 state champion team led by MVP Richard McCormick and a barrage of sharpshooters and high flyers."

According to Conway, Hardin’s team was a talented who's who of Native American players from three different schools — Lodge Grass, St. Labre and Hardin — who had a brief run together at the Big Sky State Games.

“I believe they called themselves the Wyola Running Rebels,” he recalled.

The Golden Bears would pull away late in the game and close out the Class A champs 100-92. Conway set a school home-scoring record with 40 points, going 12 of 15 from the field.

“The school (West High) closed their doors at the JV game,” Conway remembers. “I never heard the Golden Dome so loud. I might get some flak from my AA friends and teammates for saying this, but that team was arguably the toughest I played against in all four years at West. They went at least nine deep.”

Over the years, Conway said he has shared his memories of close games — including the contest with Hardin — with his players.

“I tell my players that these are the games you want to play in,” he said. “It is all about respect and building confidence. Every possession, every play means something. Those games really shape a player’s cornerstone of abilities.”

Conway said he enjoys what he does and is thrilled he can make a difference in players' lives.

Conway also is proud of being inducted into the MT/WYO Tribal Leaders Indian Athletic Hall of Fame in 2017 for his contributions in basketball as a player, and feels honored to be included with so many great players. His father is also part of the hall.

“I feel old now,” he said, laughing. "The Hall of Fame is a great idea and good news for Natives doing good things across Montana. … It is truly a great honor and testament to years of hard work. I am very thankful.”

Conway looks to the future and his current place in collegiate coaching at UTTC. He expresses having no immediate plans other than continuing to build his Thunderbirds program.

“Well as for now, I'm happy right where I am,” he said. “I don't have any plans anywhere else, but I would never say never.”

Neil Daily is the second class of 2021 West football player to commit to MSU.