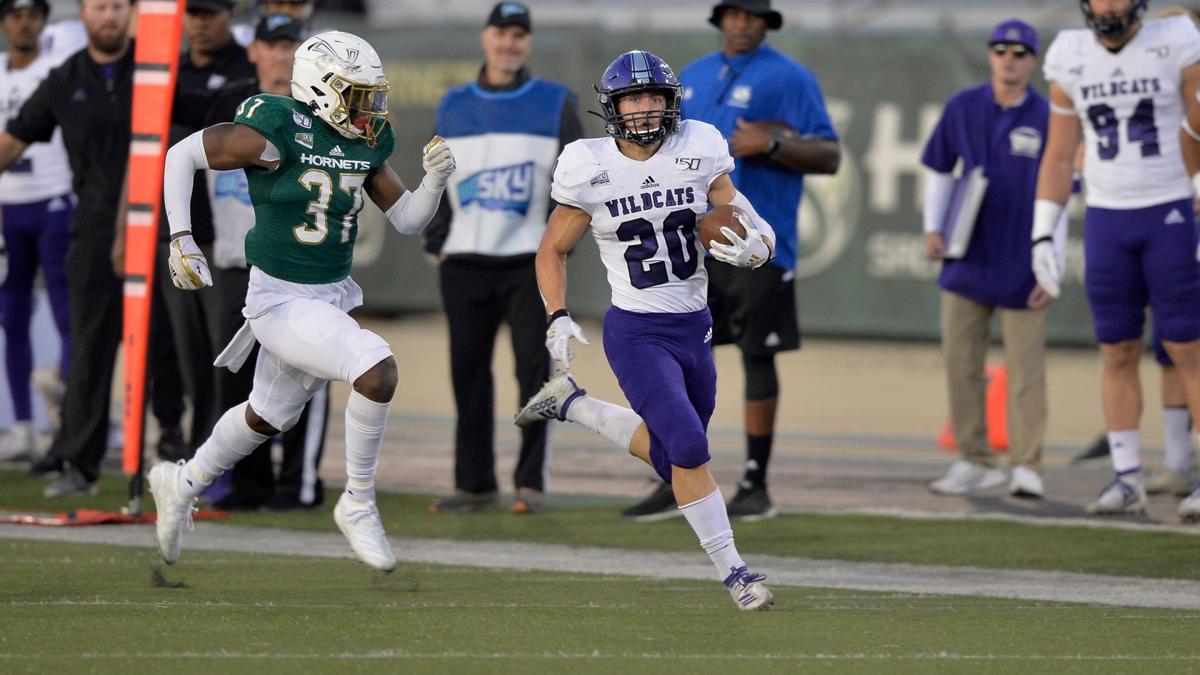 Weber State running back Josh Davis breaks down the sideline during a 36-17 victory at Sacramento State on Saturday. 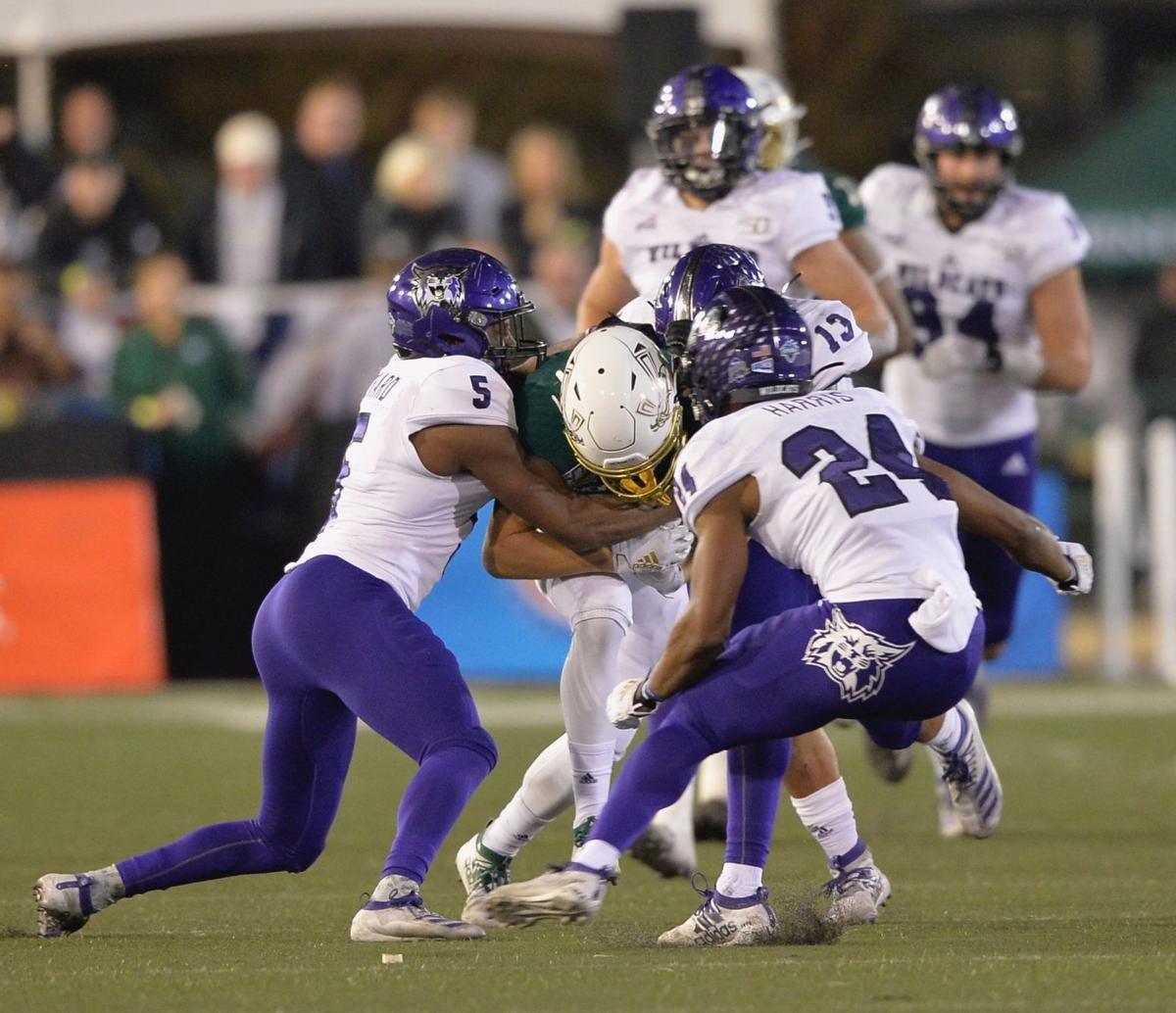 Weber State running back Josh Davis breaks down the sideline during a 36-17 victory at Sacramento State on Saturday.

BOZEMAN — Weber State’s success is built around its defense, and the Wildcats proved Saturday that there is no substitute for excellence on that side of the ball.

In a showdown between the top-two teams in the Big Sky Conference, Weber State thwarted Sacramento State’s explosive offense on the way to a 36-17 victory at Hornet Stadium. With the win, the Wildcats took the No. 1 spot in the league standings all for themselves.

Weber State improved its overall record to 7-2 and its conference mark to 5-0. WSU is now the only unbeaten team remaining in the Big Sky.

Sacramento State, one of the surprises of the league under first-year coach Troy Taylor, went 4-0 in October and was looking to remain blemish-free in the conference standings. But the Hornets were held to 84 rushing yards and were able to convert only three of 14 third-down plays.

Hornets running back Elijah Dotson, one of the most dynamic offensive players in the Big Sky, was held to 35 rushing yards and minus-10 receiving yards.

Sac State quarterback Kevin Thomson was knocked from the game in the second quarter when he was hit hard on a blindside blitz. Thomson did not return.

According to the Sacramento Bee, Thomson was taken to a hospital for further tests. His condition didn’t appear serious, the Bee reported.

“You have to give them credit because they were the reason we weren't able to get in sync, and that hasn't happened in a while,” Taylor said in a postgame release. “They did a great job and are a really good football team.”

Running back Josh Davis rushed 25 times for 177 yards and a touchdown, and helped the Wildcats’ offense possess the ball for more than 36 minutes. Quarterback Jake Constantine threw two TD passes while Kris Jackson added two scores on the ground.

But the story was Weber State’s defense, which continues to wreak havoc on the Big Sky.

Weber State hosts North Dakota this week while Sacramento State, which is now tied with Montana for second place in the Big Sky standings, travels to Northern Arizona.

One bright spot for Sacramento State on Saturday was defensive end George Obinna, who became the school’s all-time leader in quarterback sacks.

Obinna had two of the Hornets’ four sacks against Weber State, which gives him 31 for his career. The previous school record was held by Zack Nash, who registered 29.5 sacks from 2008-11.

Obinna, a sixth-year senior from Tracy, California, now has 11.5 sacks, which ranks No. 1 in the Big Sky and No. 2 in the FCS, two behind Houston Baptist’s Andre Walker.

Obinna’s sack total also puts him in a tie for fifth place in a single season in Sac State history.

Eastern Washington is searching for its first road win of the season, and the Eagles hope to get it this week when they travel to Idaho State.

EWU has won at least one road game in every season since 1968. The Eagles come into Saturday’s game having prevailed in the previous 14 matchups with Idaho State. The Bengals have lost three consecutive games, including back-to-back defeats to Southern Utah and Northern Colorado.

Eastern Washington put up 706 yards of offense last week in a 66-38 home victory over Northern Arizona. Quarterback Eric Barriere threw for 367 yards and three touchdowns, and also rushed for 101 yards and a score.

On Monday, Barriere was named the Big Sky’s offensive player of the week.

Cookus and Adams are the only passers in Big Sky history to reach the century mark for touchdown throws.

Weber State was stationary in this week’s STATS FCS Top 25 poll, remaining No. 3 behind top-ranked North Dakota State (9-0) and No. 2 James Madison (8-1). Sacramento State, previously No. 6, fell two spots to No. 8.

Northern Colorado CB Michael Walker was named the Big Sky’s defensive player of the week on Monday. Walker had two interceptions, including one he returned 35 yards for a TD, during a 26-20 win over Idaho State. … EWU PK Seth Harrison earned the league’s special teams player of the week nod. Harrison made a 27-yard field goal and hit nine point-after attempts in the win over NAU.