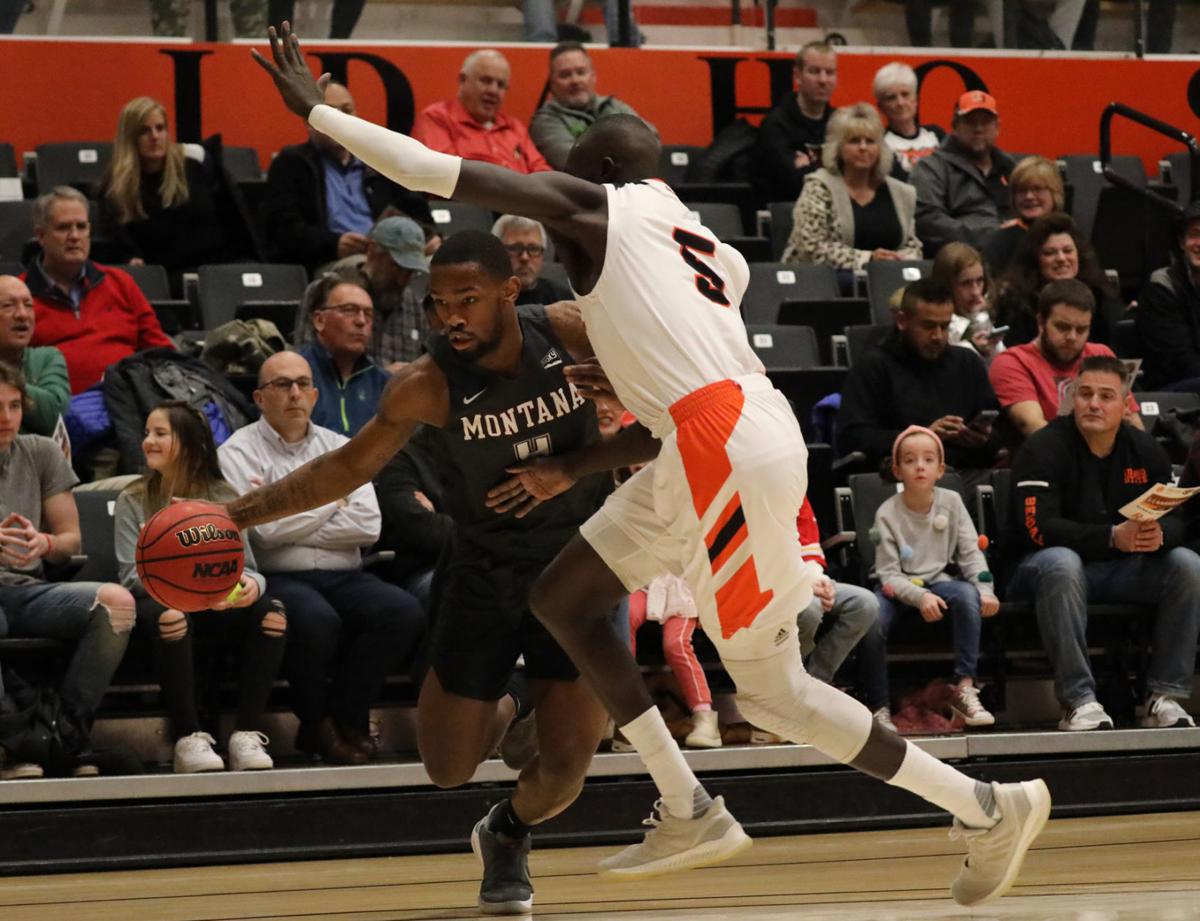 Montana's Sayeed Pridgett drives against Idaho State's Chier Maker during a 77-74 win over the Bengals on Thursday evening. 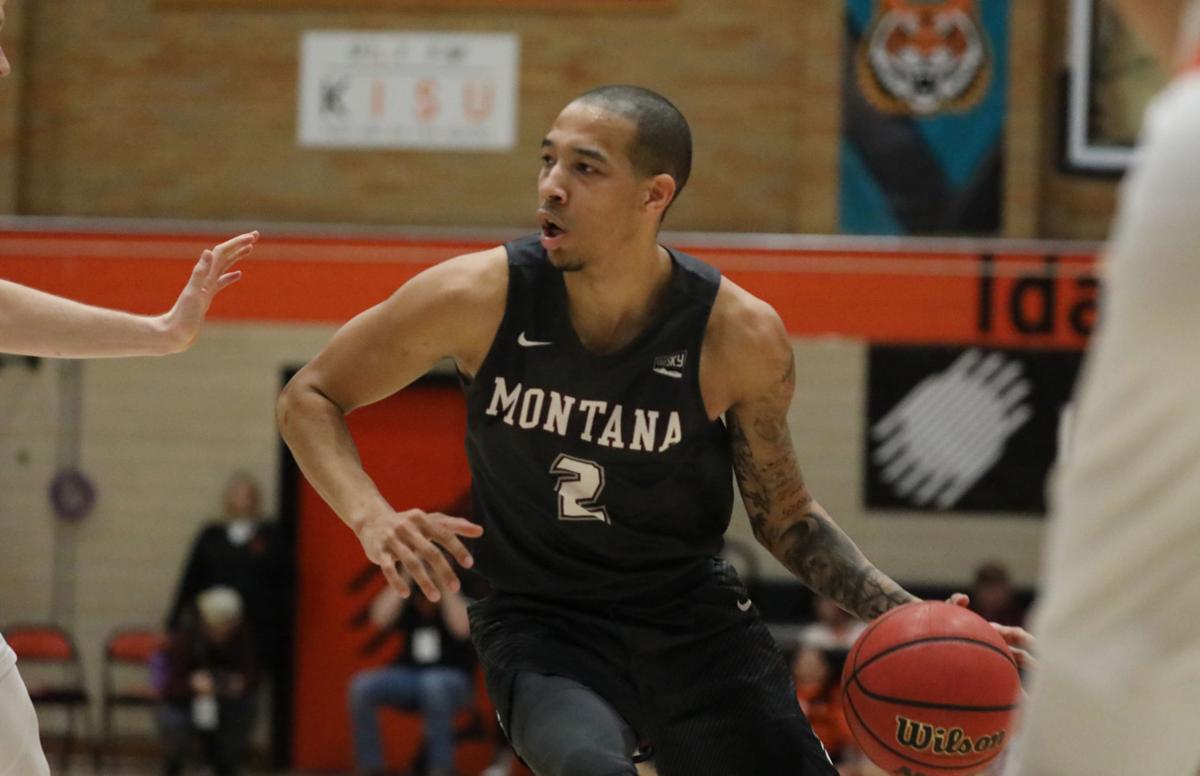 Montana's Kendal Manuel controls the ball during a 77-74 win over Idaho State on Thursday night.

Montana's Sayeed Pridgett drives against Idaho State's Chier Maker during a 77-74 win over the Bengals on Thursday evening.

Montana's Kendal Manuel controls the ball during a 77-74 win over Idaho State on Thursday night.

It wasn't always gorgeous basketball, but the Montana men’s hoops squad took down Idaho State 77-74 on Thursday night on the road.

The Grizzlies survived a strong second half by Idaho State to win their 18th straight in the series and moved to 7-1 in Big Sky Conference play. Montana now owns a three-game lead in the win column.

Still, it was rarely easy in the second half for the Grizzlies.

“Our execution failed, our discipline on the defensive end and the offensive end failed in the second half and put us into a dog fight,” Montana head coach Travis DeCuire told KGVO radio following the game. “We did a good job of surviving it, but I’ve got to do a little better job.”

The Grizzlies led by 12 points at halftime and by as many as 14 in the second half, but a 14-3 Idaho State run over 3:31 early in the final half put the Bengals squarely back in the game. After allowing 29 points in the first half, Montana gave up 25 in the first 9:43 of the second and the Bengals tied the game at 54.

A quick 7-0 run from Montana gave the Grizzlies a lead they would hold to the end of the game. Sayeed Pridgett got the run started with a layup and Kendal Manuel added a 3-point shot and a jumper inside to continue the burst.

“We went back to defending the way we did in the first half, got some stops, got some rebounds, got some 50-50 balls, Timmy (Falls) came up with a couple steals that were huge. We got locked in,” DeCuire said of Montana’s response to the Idaho State run. “I think once they got tied, we had a little more respect for them like we did in the first half and started playing the right way, at least on defense, which allowed us to win the game.”

Manuel ended with a game-high 21 points on 6-of-13 shooting and hit all seven of his free-throw attempts.

Foul trouble plagued Montana from nearly the tip; the Griz finished with 26 as a team. Falls and Mack Anderson both fouled out for the Grizzlies, while Pridgett and Jared Samuelson each had four by the end of the game.

Pridgett played just nine minutes in the first half and finished with 13 points, six rebounds and four assists.

With Pridgett in foul trouble early, the offense flowed through Samuelson in the first period. The senior forward scored 13 points in the first half on 5 of 6 shooting and finished with 16 for the game along with seven rebounds, two blocks and two steals.

“I don’t think we got it to him enough … when a guy’s on fire like that, the ball has to go in there a little more and I’ve got to do a better job, I guess, of talking about that in timeouts,” DeCuire said. “He came ready to go and he gave us a punch on the defensive end.”

Idaho State had a chance to tie the game with less than 10 seconds left, but Tarik Cool split a pair of free throws after he was fouled by Anderson. Chidi Udengwu managed to grab the offensive rebound, but airballed the layup.

Samuelson ended up with the rebound and Josh Vazquez hit two free throws to seal the game.

Montana moved to 11-8 overall, while Idaho State fell to 6-11 with a 3-5 mark in Big Sky play. Next up for the Grizzlies is a matchup on the road against Weber State, which dropped a 62-61 decision to visiting Montana State on Thursday.

“Eastern came in here and took a loss and we had talked about this as someone’s going to lose here, although someone already has, there will be more teams that do that,” DeCuire said. “We need to make sure we take care of business in places. Here, Weber’s another one, you know if they’re going to finish in the middle of the pack, we need to be one of those teams that wins at those places.”

NOTES: Yagi Selcuk had six points on 3 of 4 shooting, his first made field goals since he hit 1 of 2 shots against Northern Arizona on Dec. 29 … All five starters were in double figures for Idaho State, led by Malik Porter’s 14 points … Standout ISU guard Cool was held to 1-of-8 shooting from the field.