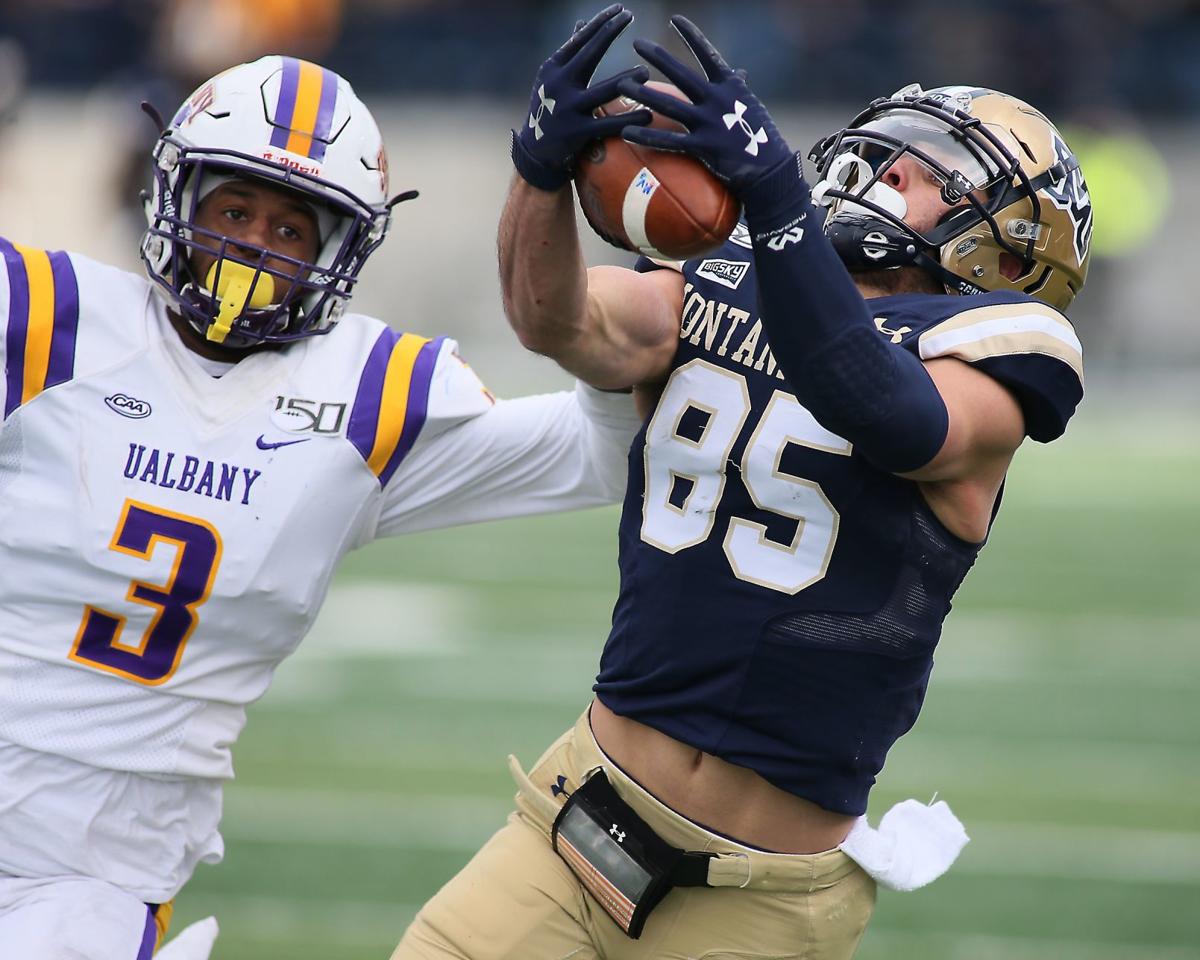 Montana State receiver Kevin Kassis stretches out to catch a pass during a 47-21 playoff victory over Albany on Saturday in Bozeman. 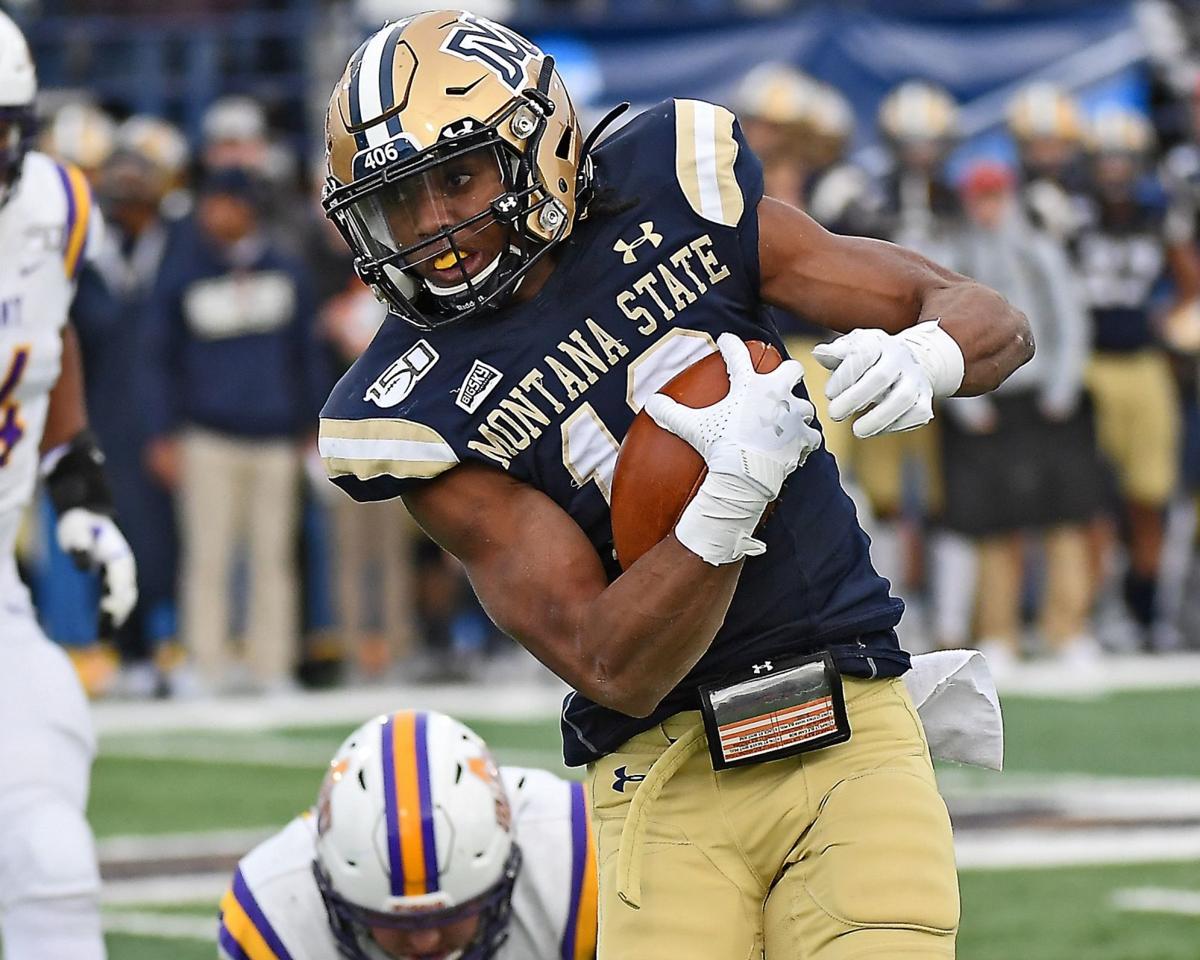 Travis Jonsen cuts up the field during Montana State's second-round playoff matchup with Albany on Saturday in Bozeman.

Montana State receiver Kevin Kassis stretches out to catch a pass during a 47-21 playoff victory over Albany on Saturday in Bozeman.

Travis Jonsen cuts up the field during Montana State's second-round playoff matchup with Albany on Saturday in Bozeman.

BOZEMAN — The formula for winning in the playoffs doesn’t change, and Montana State’s attention to detail was precise on Saturday in what proved to be one of its most complete performances of the season.

MSU dominated in all three phases in a 47-21 whipping of Albany during their second-round FCS playoff matchup in front of 12,947 fans at Bobcat Stadium.

Quarterback Tucker Rovig took the reins offensively, throwing for a season-high 279 yards and three touchdowns without an interception.

Conversely, the Bobcats’ defense sacked Albany QB Jeff Undercuffler four times and intercepted him twice — both by cornerback Damien Washington — while holding the Great Danes to fewer than 350 total yards.

Special teams-wise, Coy Steel had 105 punt return yards and running back Isaiah Ifanse busted through for a momentum-turning blocked punt in the second quarter, which produced a safety.

It all added up to the Bobcats posting their highest point total ever in a playoff game, and the win sends them on to the quarterfinal round of the postseason for the first time since 2012.

"Really, really proud of the way (we) played together as a team today,” said coach Jeff Choate, who has now guided MSU to playoff wins in each of the past two seasons. “There's no doubt it was a complete victory in all three phases.

“That’s playoff football. You’ve got to be a complete team if you’re going to be one of the better teams in the country. We spend a lot of time on fundamentals. We spend a lot of time on special teams. Usually where it starts to pay off isn’t early in the season, it’s late in the season when you don’t get away from the things that win football games.”

Rovig, who’s played increasingly well as the year has progressed, completed a career-high 24 passes while striking with precision down the field. Rovig had four completions of 30-plus yards — a rarity in this run-heavy offense — including consecutive touchdown throws of 49 and 42 yards to receiver Lance McCutcheon.

Rovig has thrown six touchdowns and just one interception in the last five games, and the Bobcats won them all.

Kevin Kassis, known for making difficult catches, caught a career-high 11 passes, including a tough 44-yarder down the sideline during which he laid out to secure the ball. Kassis had 131 receiving yards. One of McCutcheon’s TD catches was of the one-hand variety.

“Some of the balls were not the best balls by me,” Rovig said. “It’s very nice when you can throw a 50-50 ball and guarantee it’s going to be caught or an incomplete pass.”

The Bobcats’ run game still produced 203 yards, highlighted by Travis Jonsen’s 47-yard touchdown scamper down the sideline (aided by a nice lead block from Logan Jones) that tied the game in the first quarter.

Albany struck first when Undercuffler hit wideout Juwan Green with a 58-yard TD, but the Great Danes didn’t score again until the fourth quarter when the game was no longer competitive.

“I thought the kicking game really got us in a lot of trouble,” Gattuso said. “I thought we were battling on defense. They had a couple big plays but I felt like we were going to have a shot to get this thing pretty close at halftime. We just couldn’t push through.

“At the end of the day they really out-kicked us. It was a phase of the game that was very frustrating for us. It opened the door for short fields (and) field position, which is big.”

Choate said special teams "was going to be our edge today. I just really believed that while Albany has some tremendous speed at certain skill positions, I felt like our team speed was better overall, and that shows up, generally speaking, in the kicking game the most."

Montana State’s defensive front hounded Undercuffler, who came into the game with 3,270 passing yards and a FCS-best 39 touchdown throws. Undercuffler, a redshirt freshman, finished with 273 passing yards, much of which was achieved in mop-up time.

One of Washington’s two interceptions was made in the red zone, which thwarted a potential Albany scoring drive after it blocked a Tristan Bailey field goal attempt in the second quarter.

“When you force a team into a drop-back pass, it’s always fun for the defensive line,” Williams said. “And when we can get home, that makes it fun for the guys on the back end, too. It was big when we were able to make plays. You could definitely see on (Albany's) faces it was difficult for them.”

Albany, an at-large playoff selection from the Colonial Athletic Association, finished its season with a 9-4 record. It was the school's second playoff appearance.

The Bobcats will host Austin Peay in the quarterfinal round. Austin Peay went on the road to upset co-Big Sky Conference champion Sacramento State 42-28 on Saturday.

NOTES: MSU LB/QB Troy Andersen missed his second consecutive game due to injury. … Ifanse registered the Bobcats’ first blocked punt that went for a safety since 2009. … Jones had 93 kickoff return yards for MSU. … The Bobcats have have reached the 10-win plateau for the first time since the 2012 season.

No. 5 Montana State defeated the University of Albany Great Danes 47-21 in the second round of the FCS playoffs at Bobcat Stadium in Bozeman.

BOZEMAN — Montana State coach Jeff Choate has long insisted on the importance of gaining a first-round bye for the FCS playoffs.