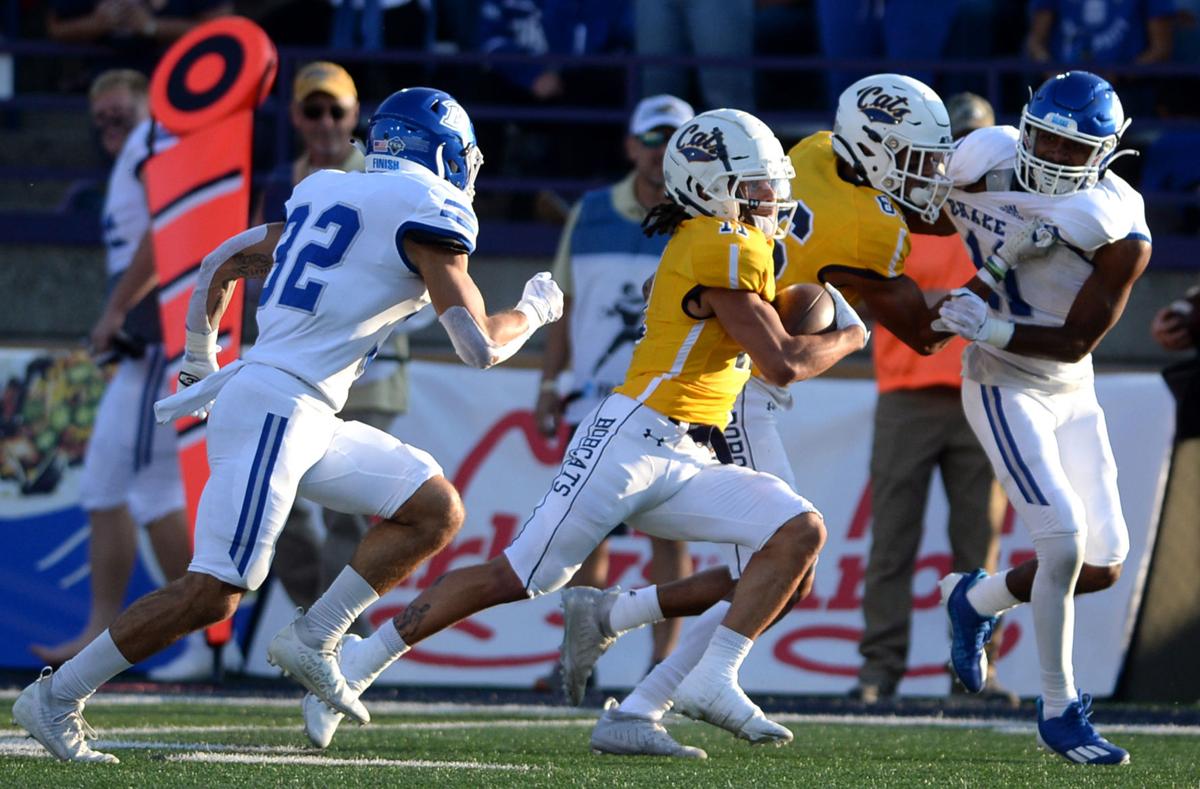 Montana State's Willie Patterson runs for a touchdown against Drake on Saturday at Bobcat Stadium. 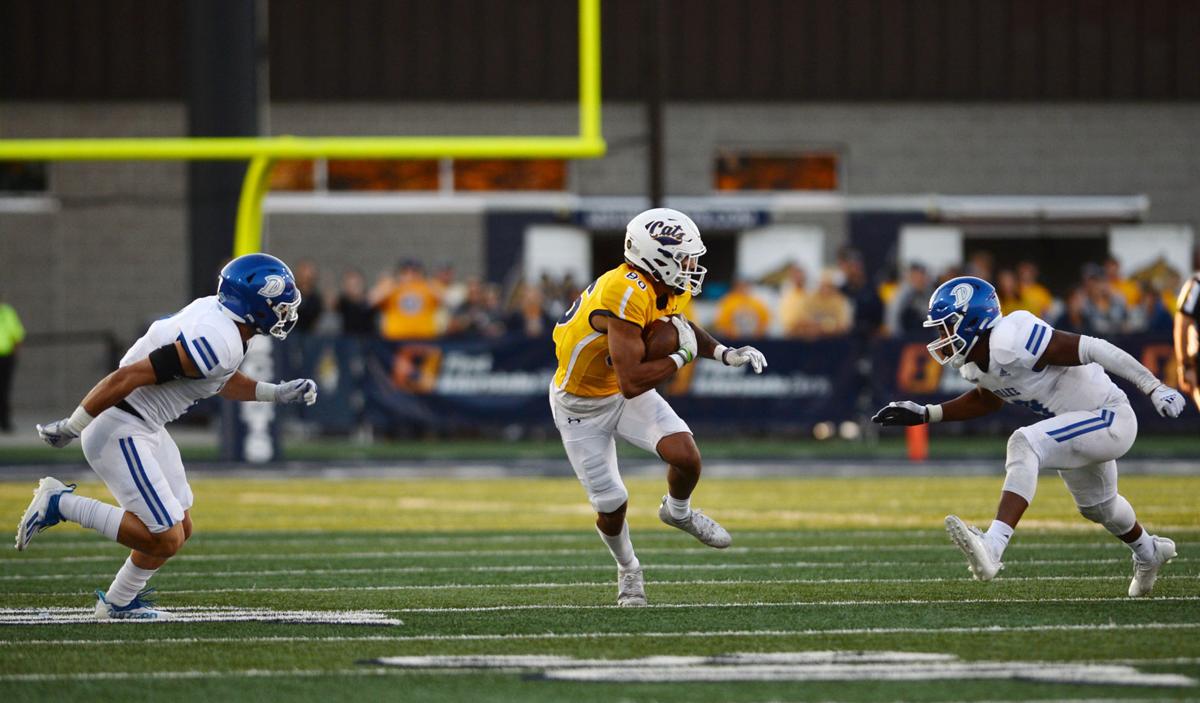 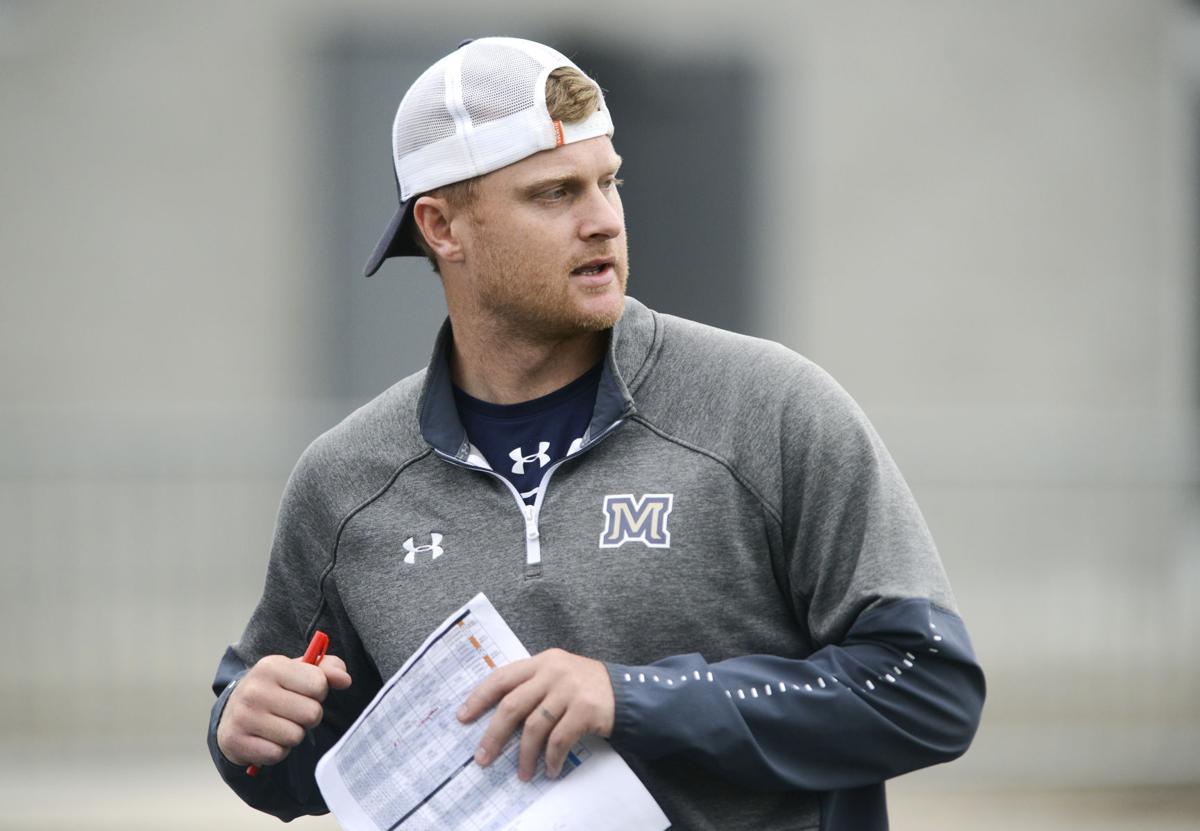 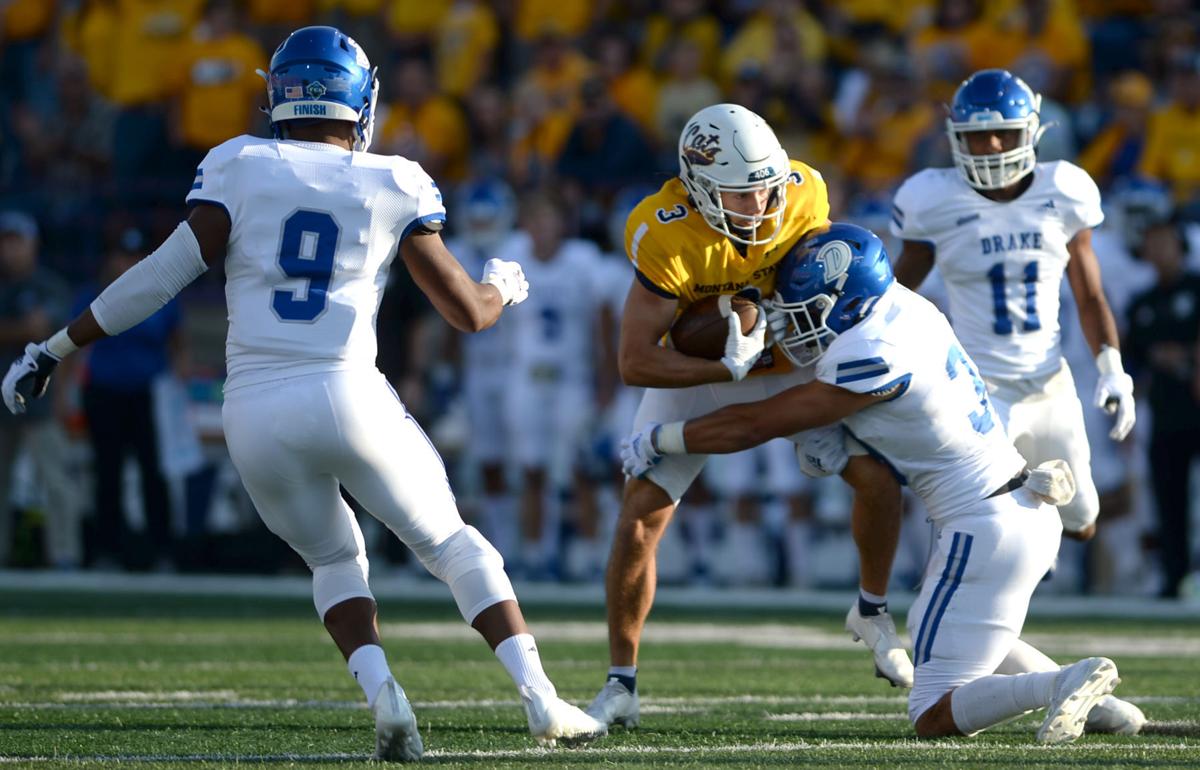 Montana State's Coy Steel catches a pass and is tackled by Drake's Danny Morales on Saturday, Sept. 11, 2021 at Bobcat Stadium.

Montana State's Willie Patterson runs for a touchdown against Drake on Saturday at Bobcat Stadium.

Montana State's Coy Steel catches a pass and is tackled by Drake's Danny Morales on Saturday, Sept. 11, 2021 at Bobcat Stadium.

BOZEMAN — The Drake football team did its homework, but for a two-year-old assignment.

The Bulldogs were facing Montana State, a team with a mobile quarterback and a head coach reputed to have a run-first philosophy. The Bobcats rushed for a program-record 3,871 yards in 2019 on 681 carries, 301 more than their pass attempts. Their best running back, Isaiah Ifanse, was starting against Drake on Saturday at Bobcat Stadium.

It’s understandable, then, that Drake’s defensive game plan was to stop MSU’s run game, especially after Ifanse ran for 103 yards on 16 carries a week earlier at FBS Wyoming.

“They tried to put everybody in the box and play man, and we took advantage of it,” MSU offensive coordinator Taylor Housewright said Monday. “We've got a lot of weapons.”

MSU never trailed against Drake and was ahead for most of the Wyoming game, yet the Bobcats rushed 67 times and attempted 58 passes in those games combined, and some of those carries were scrambles from starting quarterback Matthew McKay. There are many reasons for that balance, and a big one is MSU’s wealth of receiving threats.

“We had to throw the football more, and we were able to do it,” MSU coach Brent Vigen said Monday. “If a team is going to stack it up, that’s the choice they made, but we have some weapons on the edge, and Matt can certainly put the ball where it needs to be put.”

Vigen was known, and sometimes criticized, for his run-heavy offenses during his seven years as Wyoming’s offensive coordinator. When MSU hired him earlier this year, it made sense to expect a similar offensive style with the Bobcats, whose run-heavy offense in 2019 under head coach Jeff Choate featured pass-first starting quarterbacks (Tucker Rovig and Casey Bauman).

Vigen basically promised that MSU would rush often, calling the run game “the foundation” of his offensive philosophy back in February. But he added a foreshadowing caveat.

“If you can play well and add an element from a passing perspective and be unpredictable, be balanced, achieve those things, obviously you become that much harder to defend,” Vigen told the Bozeman Daily Chronicle in February.

McKay has embodied that balance with a healthy mix of long, short and intermediate passes. He’s completed 38 of 53 (71.7%) passes for 456 yards, five touchdowns and no interceptions this season, and he’s rushed 17 times for 67 yards (3.9 ypc).

MSU’s best receiver has been Lance McCutcheon, who has a team-high 192 yards and 12 catches. McKay called McCutcheon reliable and dangerous. The senior from Bozeman has run many chain-moving routes while also making two of the Bobcats’ three longest catches (30 and 45 yards) in their first two games.

About one-third of McKay’s completions this season have gone to McCutcheon, illustrating both McCutcheon’s reliability and the array of other passing options.

Against Drake, McKay threw two touchdown passes to Willie Patterson, the first on a screen and the second on a deep ball. McKay also completed two passes apiece to receivers Cam Gardner, Jaden Smith and Coy Steel. The North Carolina State transfer found backup running Elijah Elliott twice, as well as receiver Charles Brown and fullback RJ Fitzgerald once each (Fitzgerald injured his left arm on the two-yard reception and will miss “probably at least a few weeks,” Vigen said).

“The opportunity presented itself where I should go with the ball, and I just took my matchup,” McKay said. “Those guys made a lot of big plays.”

In the 19-16 season-opening loss to Wyoming, Ifanse caught four passes, and tight ends combined for five receptions, including a go-ahead one-yard TD from McKay to Sunburst’s Treyton Pickering with 2:17 left.

So much of the balance has been based on the defenses they’ve gone up against. Wyoming and Drake both showed willingness and ability to slow MSU’s run game, so the Bobcats weren’t going to stubbornly force something that wasn’t there.

That doesn’t mean MSU is going to become an Air Raid offense. Vigen wished he’d given Ifanse more carries against Wyoming, and neither he nor Housewright were satisfied with the offense against Drake, even with McKay’s 19-of-25, 256-yard, three-TD performance.

“I don't care if they put all 11 guys in the box, we’ve got to figure out a way to block them,” Housewright said. “At some point during the season, we're going to have to get a yard to win the game. It doesn't matter if they put everybody on their team in there, you’ve got to be able to get it.”

MSU’s opponent this Saturday, San Diego, might not stack the box as much as Drake. Perhaps MSU’s offensive line will open more holes regardless, allowing the Bobcats to run a more 2019-style offense. Any ability to do that going forward will be thanks, in part, to the threatening passing game MSU has displayed so far.

The Bobcats will face tougher defenses than Drake’s during Big Sky Conference play, but the Wyoming game provided optimism that they can pass effectively against good opponents.

McKay has succeeded even without targeting starting receivers Smith and Steel all that often (five catches total between them). McCutcheon’s backup, Andrew Patterson, hasn’t caught a pass yet, and Akron grad transfer Nate Stewart might return from injury later this season (he was McCutcheon’s backup before the injury).

“In the past, it's just been run, run, run; right, wrong, indifferent,” Housewright said. “I'd like to have the ability to do both. I think you can be a pretty good offense when you can do that.”

Willie Patterson thought he had made a shifty move to gain separation from a defender. He was wrong, at least going against Richard Sherman.