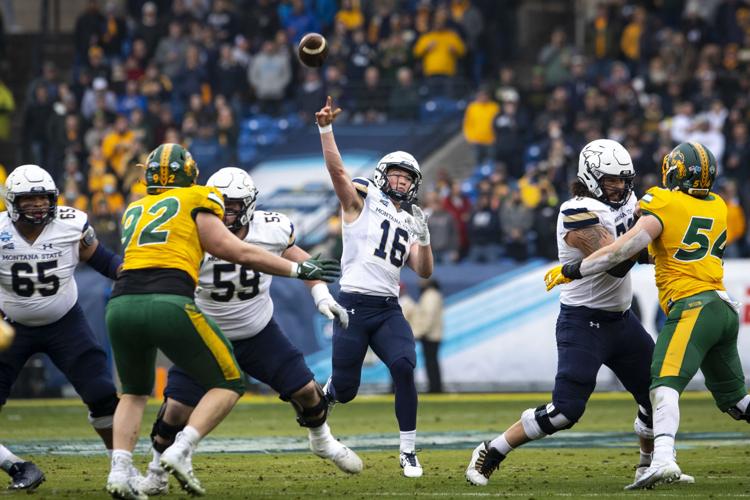 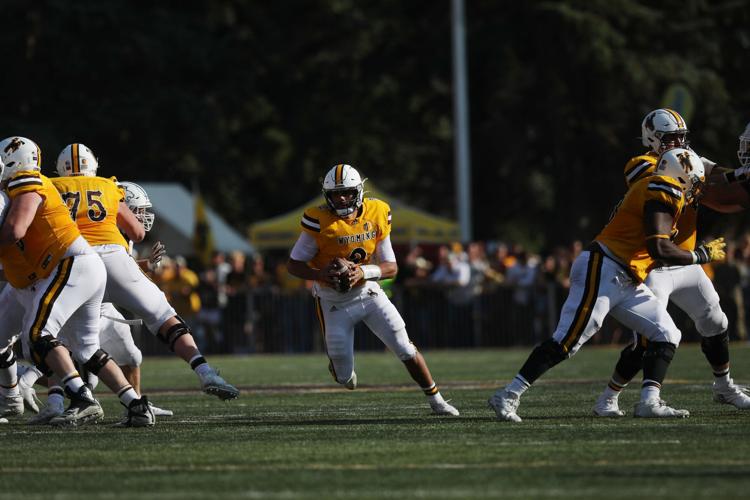 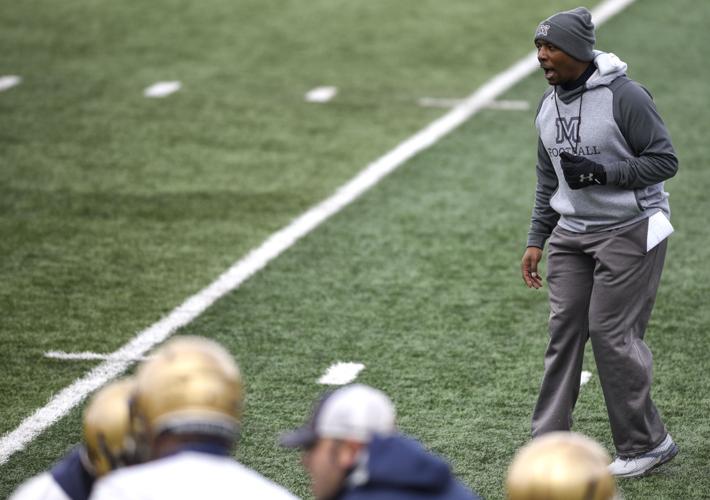 Montana State defensive coordinator Freddie Banks puts his players through a drill during the first day of spring practice on March 23, 2021, at Bobcat Stadium in Bozeman.

Montana State defensive coordinator Freddie Banks puts his players through a drill during the first day of spring practice on March 23, 2021, at Bobcat Stadium in Bozeman.

Sean Chambers backed up Tyson Vander Waal, who’s now at Idaho State, for Wyoming’s first eight games of the 2018 season and was elevated to starter in the ninth. Chambers rushed for 100 yards in three straight games but suffered a broken right fibula early in the fourth.

That season portended a brutal next three years for Chambers. More injuries and some ineffectiveness led Chambers to the transfer portal last month. On Monday, the redshirt sophomore from Kerman, California, decided to drop from the Football Bowl Subdivision to the Football Championship Subdivision by committing to MSU, where he’ll compete for a starting job with a similar QB.

The Bobcats hope the parallels between Chambers and Tommy Mellott end with the dual-threat electricity. Like Chambers, Mellott (the 97th-ranked dual-threat QB in 2020) became the starting QB late in his freshman season and made his biggest impact on the ground, rushing for 411 yards in three straight FCS playoff games to lead MSU to the national championship game. Like Chambers, Mellott’s final start of his freshman season ended early because of an injury.

The extent of Mellott’s right ankle injury is uncertain, but seeing the freshman from Butte limp on the sidelines after the first drive of Saturday’s 38-10 FCS championship loss to NDSU illustrated the hard reality surrounding running QBs. The more cuts you make and hits you take, the more likely you’ll get hurt.

Chambers missed the final five games of the 2019 season because of a knee injury caused by a hit he took on a touchdown run. The two consecutive season-ending injuries overshadowed his encouraging numbers: 896 rushing yards and 12 TDs on 149 carries (6.0 yards per carry); 1,181 passing yards, 10 TDs, 3 INTs with a 43.8% completion rate over his first two seasons with his Mountain West team.

In Wyoming’s 2020 season opener, Chambers got tackled for a loss on the third play from scrimmage and didn’t return the rest of the fall. The 6-foot-3, 225-pounder broke his left fibula on that play, a run.

Brent Vigen saw all three of Chambers’ injuries in person and worked closely with him as Wyoming’s offensive coordinator. Now MSU’s head coach, Vigen is giving his former QB — who handed MSU a season-opening 19-16 loss — an opportunity to spend his remaining two years of eligibility in Bozeman.

For Chambers to start an opener for the fourth straight season, he’ll have to convince MSU’s coaches that he’s a better option than his younger position mates. Even if he does, it remains to be seen if he can stay healthy and productive.

Chambers rushed for 198 yards and three TDs on 72 carries (2.8 ypc) in 2021, and he completed just over 50% of his passes for 1,125 yards, six touchdowns and seven interceptions. He lost his starting job after seven games, a disappointing end to a Cowboy career that started with lots of promise.

Bobcats finish No. 2 in final rankings

MSU finished No. 2 behind NDSU in the final Stats Perform FCS Top 25 of the season, released Monday.

It's the best end-of-season ranking for the Bobcats since they finished No. 2 in Division I-AA in 1984. That poll was released prior to postseason, and MSU went on to beat Louisiana Tech 19-6 for its third and most recent national title.

The Cats have finished their previous two seasons in the top four of the Stats Perform rankings. They were No. 4 in 2019 after losing to NDSU 42-14 in the semifinals.

MSU began the season at No. 12, eight spots behind NDSU. The Cats were fourth among Big Sky teams in the preseason Stats Perform rankings behind No. 6 Weber State, No. 9 Montana and No. 11 Eastern Washington.

UM finished No. 6 in this season’s final Stats Perform Top 25. No. 7 EWU, No. 10 Sacramento State and No. 17 UC Davis were the other Big Sky teams in the rankings.

The top of the poll was mostly aligned by order of playoff finish. Semifinalists James Madison and South Dakota State were No. 3 and No. 4, respectively. UM, No. 5 Sam Houston and No. 8 Villanova made the quarterfinals. The one diversion: EWU lost to Montana in the second round, while No. 9 East Tennessee State fell to NDSU in the quarters.

Colorado State hasn’t officially announced the hiring of MSU defensive coordinator Freddie Banks, but he expressed his appreciation for his now-former team Sunday on Twitter.

“Bozeman is a place that will always be special to us!!! Sorry we couldn’t finish the job!!!” Banks wrote. “Thank you Seniors and a Special group, Thank you Bobcat Nation, Thank you @bvigen.”

Bozeman is a place that will always be special to us!!! Sorry we couldn’t finish the job!!!
Thank you Seniors and a Special group, Thank you Bobcat Nation, Thank you @bvigen #Love #GoCatsGo pic.twitter.com/ykeZH8pXNO

Last month, sources confirmed to 406mtsports.com and several other outlets that Banks would leave MSU after one season for the same job at CSU. Cats assistant defensive line coach Adam Pilapil will join Banks at the Mountain West program in Fort Collins, Colorado, per sources.

“Wanted to take the time to acknowledge not only my coach but a mentor,” Manning wrote. “Hard to put into words what you meant to me coach but the real know! There is nobody else I would’ve wanted to go on this ride with.”

Wanted to take the time to acknowledge not only my coach but a mentor. Hard to put into words what you meant to me coach but the real know! There is nobody else I would’ve wanted to go on this ride with. #GoCats ! pic.twitter.com/71NgckfcDI

Guide to the Class B state track and field meet