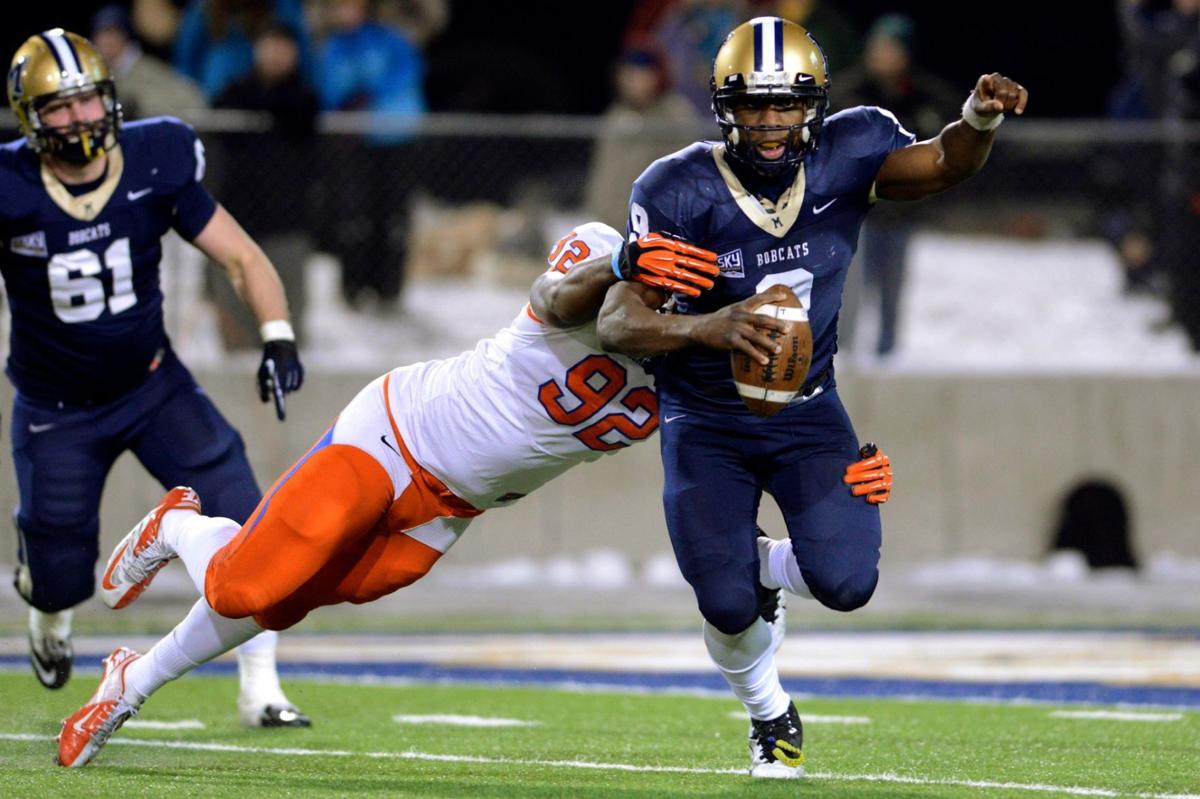 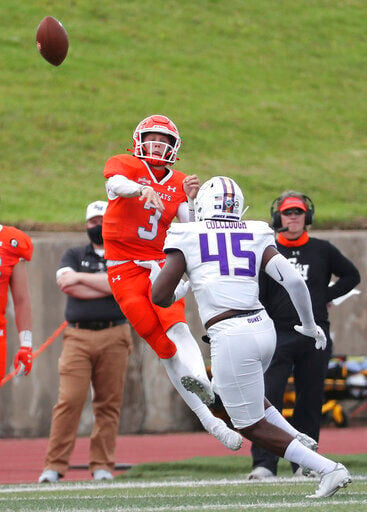 Sam Houston quarterback Eric Schmid gets off a pass over James Madison defensive lineman Antonio Colclough (45) during a semifinal game in Hunstville, Texas, on May 15, 2021.

BOZEMAN — Two teams are ranked ahead of Montana State in the Stats Perform FCS Top 25. Neither will be part of the Football Championship Subdivision in the near future.

Top-ranked Sam Houston and No. 2 James Madison officially joined Football Bowl Subdivision conferences last week. Sam Houston will be a Conference USA team starting in July 2023, while JMU will head to the Sun Belt no later than that date, with July 2022 as the target.

There are no public plans for any Big Sky school to ascend to the highest Division I level, but the impending moves will affect the Big Sky in at least one way.

Sam Houston is the defending FCS champion. JMU won the title in 2004 and 2016 and lost to North Dakota State in the 2017 and 2019 title games. Jacksonville State also lost to NDSU in the 2015 championship game.

JMU’s opponent in that 2004 title game was Montana, and the Dukes beat Big Sky program Weber State in the 2019 FCS semifinals and the 2017 quarterfinals. Sam Houston played Cal Poly, MSU and Eastern Washington in three straight rounds in 2012 (the Bearkats won all three), among other Big Sky opponents over the years. Jacksonville State lost to EWU in the 2013 quarters and has been close to title contention in almost every season since.

Other effects from those departures will likely be small, or at least hard to foresee until those programs change conferences in the next two years. Perhaps some of the Big Sky’s partnerships, like the media rights agreement it recently formed with ESPN, will feel an impact, in positive or negative ways. The conference would certainly welcome more deep playoff runs and titles.

The recent moves could spur Big Sky programs to make the jump. MSU coach Brent Vigen would be surprised. Jacksonville State, JMU and Sam Houston were attractive to their new FBS conferences “from a geography perspective,” Vigen said Monday.

“Those conferences do dictate those opportunities,” he said.

Idaho, which will play at MSU on Saturday, rejoined the Big Sky in 2018 after four years in the Sun Belt.

“They more than anyone, from an FBS perspective, probably got their hand forced because of their geography,” Vigen said of the Vandals. “That was unfortunate for them because I would guess that that wasn’t the plan.”

The Mountain West is one of the few, maybe only, FBS conferences that would make any sense for Big Sky programs to join. More obstacles are in their way than there were for Jacksonville State, JMU and Sam Houston.

“Will that change the landscape, a few high-profile teams leaving the division? Certainly. And that’s been occurring for several years,” Vigen said. “What does that mean to us? I think you’ve got to go about it from a perspective of all we can do is control what we can control.

Weber State (4-5, 3-3) dropped from No. 24 to unranked because of its 30-18 home defeat to unranked Portland State (5-4, 4-2). The loss squashed the playoff hopes for WSU, which won at least a share of the Big Sky title the previous four seasons.

SDSU was rewarded for its win over NDSU, jumping from No. 9 to No. 4.

Montana State earned Big Sky defensive and special teams player of the week honors in the same week for the second time this season.

The conference handed out its latest honors to MSU linebacker Troy Andersen and punter Bryce Leighton, as well as Idaho running back Roshaun Johnson.

Andersen tallied 15 total tackles and a half tackle for loss in the 23-20 win at Eastern Washington. The senior helped MSU hold the Eagles to more than 30 points below their per-game average and 14 points less than their previous-worst total in a game this season.

Leighton also played a key role in EWU’s low output. The average starting field position for EWU on Leighton’s five punts was its own 15-yard line, and the freshman pinned EWU inside its own 20-yard line on four of them, making it difficult for all-American quarterback Eric Barriere and his teammates to reach scoring range. Leighton’s final punt went out of bounds at the 3-yard line with 3:55 left, leading to a three-and-out from the Eagles and a game-ending drive from MSU.

MSU defensive end Daniel Hardy and kicker Blake Glessner were both named players of the week on Oct. 18 for their performances in a 13-7 win at Weber State.

Johnson rushed for 174 yards and all six Idaho touchdowns on 30 carries (5.8 ypc) in a 42-24 win over Southern Utah on Saturday. No other FCS or FBS player has rushed for six TDs so far this season. Johnson broke the program record for individual rushing TDs in a game, and he finished one short of the Big Sky record.

Sac State is tied for first with Montana State, which moved up in the latest rankings.