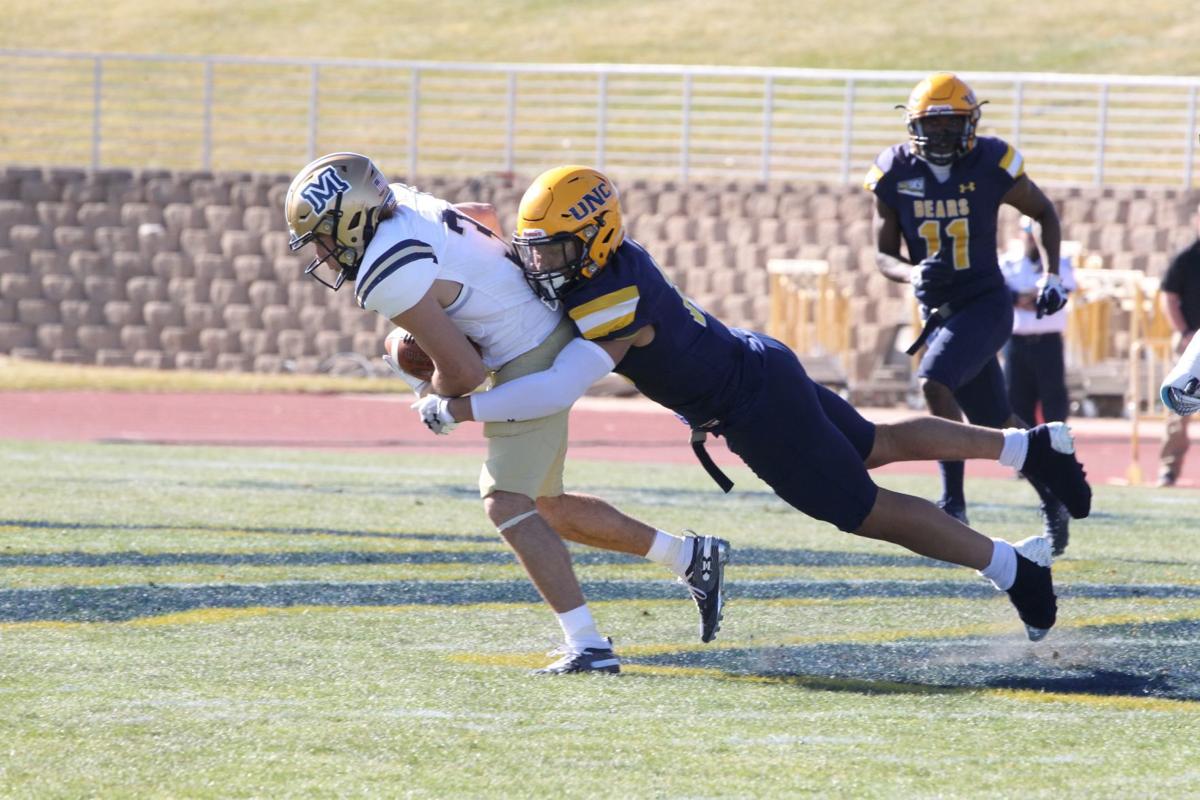 Montana State's Coy Steel tries to break away from a Northern Colorado defender during a 45-14 victory Saturday in Greeley, Colo. 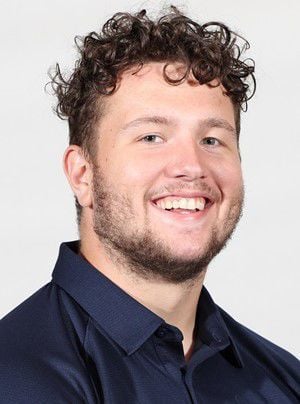 The play, resembling something out of the Tim Tebow playbook at the University of Florida, began with Andersen taking a shotgun snap. He faked as if he would plunge into the line, but at the last moment he jumped to lob a soft pass to Scrempos, who was open in the back of the end zone behind an unsuspecting Bears defense.

Scrempos, lined up at tight end and apparently a deft pass-catcher despite his 6-foot-6, 300-pound frame, cradled the ball for the touchdown even though Andersen admitted he thought he put too much air under it and that it might sail incomplete.

It gave MSU a 7-0 lead. Scrempos, doing what any defensive lineman would do in that situation, emphatically spiked the ball to celebrate the touchdown.

That, of course, is a no-no in college football, and he incurred an unsportsmanlike conduct penalty because of it.

“I’m sure coach Choate’s not too happy about that,” Andersen said with a big smile. “I just kind of go with the flow.”

Choate found amusement in it afterward, but conveyed the surprise he felt at the time.

“All I remember is Scrempos spiking it. So I blacked out after that,” Choate said to laughter before explaining the thought process behind the play.

“Obviously when Troy goes in the game it’s no mystery as to what’s going to happen, by and large. Oftentimes those guys that are responsible for the tight ends are going to get their eyes in the backfield and that’s going to open up an opportunity.”

Scrempos was one of three MSU defensive players to find the end zone on Saturday. Andersen added an 11-yard touchdown run in the second quarter and fellow linebacker Callahan O’Reilly ran 73 yards for a score on a fake punt in the third.

“That’s awesome to see,” linebacker Josh Hill said. “We’re super excited for those guys. Wish it would happen on defense. Man, we’re trying. But I think we’ll get there eventually.

“That just shows the dynamic athletes we have on our side of the ball that are able to do everything.”

The Bobcats’ offense isn’t conducive to making big plays through the air — at least that’s not what we typically see — but it is able to create explosive gains on the ground, and that happened over and over against Northern Colorado.

In the first quarter, the Bobcats, using receiver sweeps as a means to soften the edges of UNC’s defense, got a 39-yard run from wideout Tyrone Marhsall, a 10-yarder from Willie Patterson and an 11-yarder from fellow receiver Mark Estes.

Meanwhile, tailbacks Logan Jones and Lane Sumner busted runs of 17, 13 and 33 yards. Jones also had a 57-yard run on the first play of the third quarter.

Even Davine Tullis, a seldom-used offensive player, ripped off a 45-yard run in the fourth quarter.

“And then Davine getting in at the end, I was really hoping he would get in (the end zone). He’s a guy that’s worked a lot and deserved a little bit of a shot and made some plays.”

The Bobcats finished with a season-high 451 yards on the ground, and averaged 9.8 yards per carry.

Choate and the Bobcats on Saturday welcomed the return of Patterson, a sophomore receiver from Tacoma, Washington, who last played in Week 2 versus Southeast Missouri due to an upper body injury.

Patterson, a shifty playmaker, got his first touch in his first game back on a sweep play in the first quarter, which he took for 10 yards to the Northern Colorado 2. On the next play, Andersen lofted his touchdown pass to Scrempos and the Bobcats were off and running.

“Absolutely,” Choate said when asked if it was good to get Patterson back in the active lineup. “Willie just brings a lot off good energy, too, outside of his playmaking ability. He’s a guy that’s really engaged in the game and has a lot of positive energy on the sideline.”

No. 12 Montana State churned out a season high 451 rushing yards at Northern Colorado.

GREELEY, Colo. — There was no way to predict that three defensive players would end up accounting for three touchdowns for Montana State on Saturday.