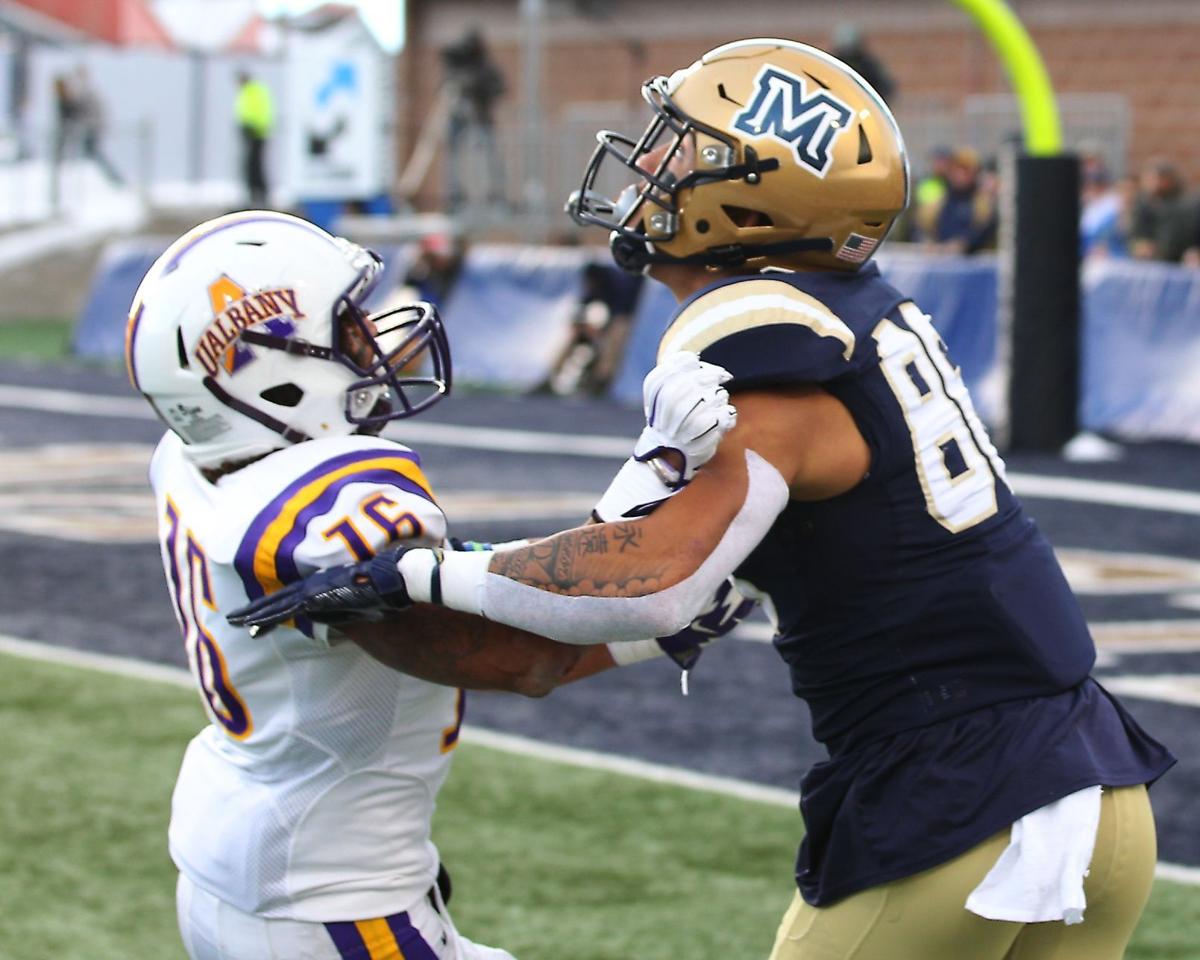 Montana State wide receivers Lance McCutcheon, right, and Peyton Hanser celebrate a touchdown by McCutcheon against UAlbany in 2019 during the FCS playoffs at Bobcat Stadium. 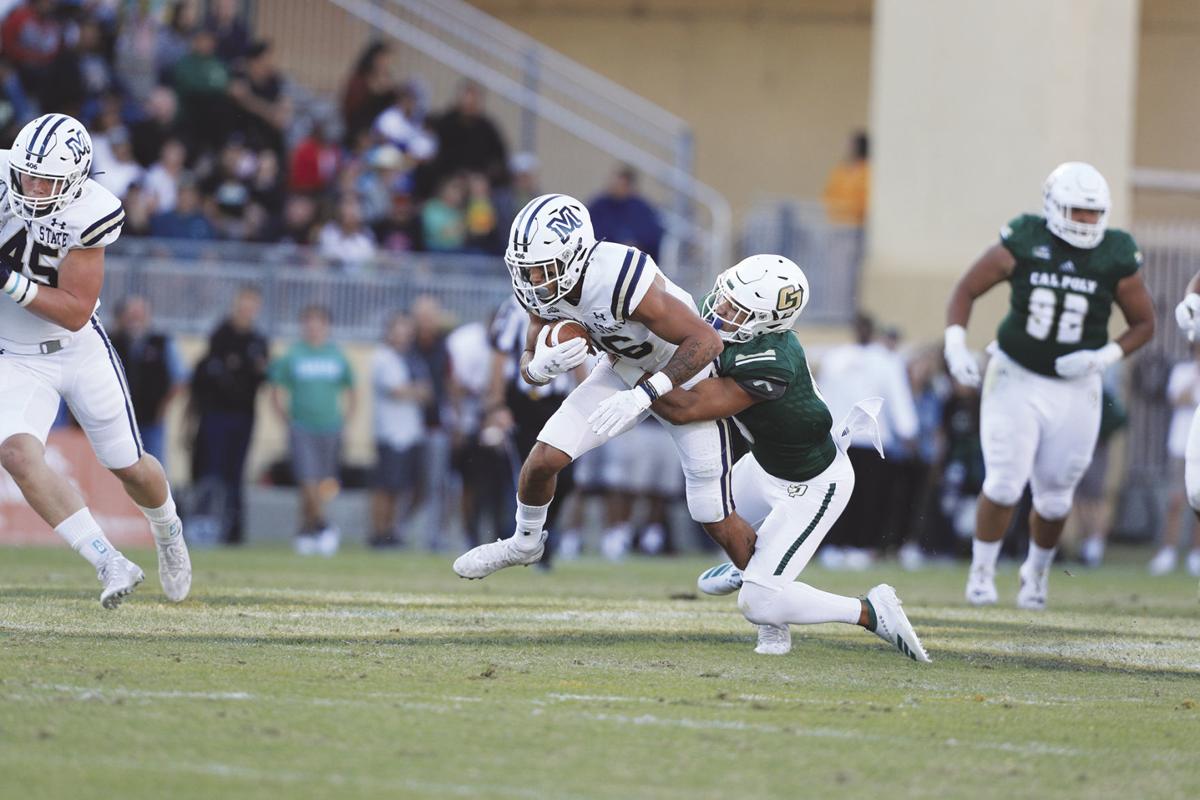 Montana State wide receiver Lance McCutcheon tries to stay on his feet in 2019 at Cal Poly.

Montana State wide receivers Lance McCutcheon, right, and Peyton Hanser celebrate a touchdown by McCutcheon against UAlbany in 2019 during the FCS playoffs at Bobcat Stadium.

Montana State wide receiver Lance McCutcheon tries to stay on his feet in 2019 at Cal Poly.

BOZEMAN — Contemplating his career, Lance McCutcheon was conflicted. He simultaneously felt rewarded and that he had endured frustration.

The Montana State senior from Bozeman has flashed moments of brilliance in his college career. He’s been highlighted on national television for his acrobatic catches in the FCS playoffs.

McCutcheon’s also experienced stretches of less production than he hoped. He wants to be an all-Big Sky wide receiver, but so far, he hasn’t played to that level.

He has one more season to prove to himself and everyone what he’s capable of. He’s toiled away for nearly two years since his junior season to become a primary target for MSU’s quarterbacks and set an example for the Bobcats.

This has been evident to the team’s coaches as MSU concludes its second week of spring practices. Bobcats wide receivers coach Justin Udy expects McCutcheon to be a consistent weapon.

“I’ve waited a long time, and this is my last year, so who doesn’t want to go out with a bang for their last year?” McCutcheon said. “Just seeing how it all worked out to where we are now, the offseason work we’ve been doing for almost two years now is finally starting to pay off.”

McCutcheon was scheduled to play his senior season in 2020 if the FCS season hadn’t been postponed because of the coronavirus pandemic. That’s not how he wanted his career to end.

He was supposed to graduate this spring. Instead, the business marketing major spread his classes out over a longer period of time so he’ll finish after this fall.

McCutcheon viewed that nearly two-year gap between games as an opportunity to enhance his craft. He called the break “a blessing in disguise” so he could focus on himself and his skills.

“I didn’t want to go out without playing my senior year. That’s ultimately why I came back,” McCutcheon said. “There was no choice for me to leave. I was going to play my last year no matter what.”

In 2019, McCutcheon was fifth on the team and second among returning players with 13 catches which went for 197 yards and two touchdowns — both of them in a single game in the playoffs. In 2018, he totaled the exact same yardage on 15 catches and scored a touchdown.

In both seasons, he had catches of 40 yards or more and averaged more than 14 yards per reception.

MSU is without its top two pass catchers from its last season. Kevin Kassis and Travis Jonsen, both all-conference selections in 2019, accounted for 54% of MSU’s receptions and 57% of the team’s receiving yards.

McCutcheon wants to step into that void and be a dependable receiver for the Bobcats’ passers.

“Consistency is the biggest thing I can do for this last year, both for myself and my team,” he said. “Blocking, running, the pass game, the run game, just everything I do, just with consistency.”

While McCutcheon has normally lined up out wide, Udy noted the Bobcats are trying to acclimate every receiver to every position. For McCutcheon, that means becoming accustomed to playing in the slot.

He confessed it’s a struggle. But he desires to expand his repertoire. This way, MSU coaches will have more reason to keep him on the field more often.

When asked about his goals for the season, McCutcheon took a few moments to ponder his answer.

“That’s tough,” he said. Earlier, he had recalled how much he learned from Kassis and Jonsen before they graduated. He wants to pass on lessons to MSU’s underclassmen now.

“Just to be the best leader I can,” McCutcheon finally answered, “not just for the receivers but for everyone on the team. It’s going to be my fifth year here, so I’ve been through it. I have a little more knowledge and experience than some of these guys, so just be there as support for any question for any guy at the position and just be all for the team no matter what.”

McCutcheon’s leadership for a program with new coaches, Udy said, is “really valuable” because he understands how much time and effort is required to improve.

Udy called McCutcheon a mentor for the wide receivers. He believes this role has given the senior wideout more confidence.

“We can go and practice where he doesn’t see the ball at all, but you never hear a word about it because when his number is called he’s making the play,” Udy said. “That’s really infectious and contagious.”

“The main thing that we talked about in our room is just being unselfish and understanding when opportunities do come that we do need to take advantage of them,” Udy also said. “I think that’s what Lance and all the other guys in the room see because he is a little bit older and mature.”

McCutcheon takes pride in playing for MSU, at Bobcat Stadium, in his hometown. People who watched him grow up can watch him compete in person on game days.

After emphasizing the importance of setting the pace for his position group, McCutcheon mentioned another goal of his. One that’s personal. He wants to be all-conference before he graduates, like MSU receivers before him.

“Now it’s his turn,” Udy said. “For him, his focus has really been about not letting the moment get too big. It’s still just football, and he’s very capable.

“For him, he’s been waiting a long time, and this is going to be a special season. Is it always going to be perfect? No, and we know that, but being able to push forward and get the most of his opportunity is something that drives him every day.”

MSU will begin selling season tickets for the fall campaign on April 15.