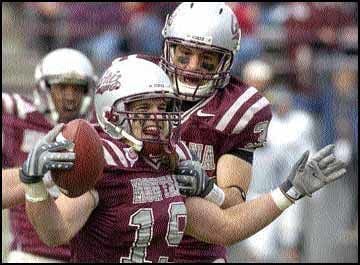 Former Griz and NFL safety Colt Anderson of Butte celebrates during a game in 2008. 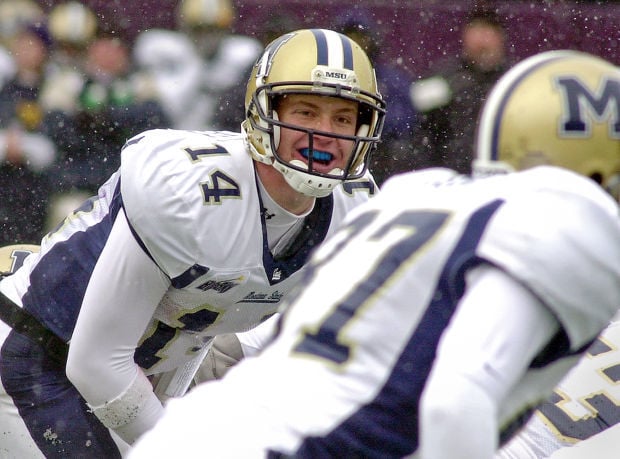 Montana State quarterback Travis Lulay calls the signals at the line of scrimmage during the Cat-Griz game at Washington-Grizzly Stadium in 2002. Lulay, a true freshman at the time, helped end the Grizzlies’ 16-year winning streak against the Bobcats with a 10-7 victory.

Former Griz and NFL safety Colt Anderson of Butte celebrates during a game in 2008.

Montana State quarterback Travis Lulay calls the signals at the line of scrimmage during the Cat-Griz game at Washington-Grizzly Stadium in 2002. Lulay, a true freshman at the time, helped end the Grizzlies’ 16-year winning streak against the Bobcats with a 10-7 victory.

Editor's note: The following is a timeless Brawl of the Wild story written in 2010 and updated this month.

MISSOULA — The best thing about talking Brawl of the Wild with ex-players is they usually speak freely.

In some cases it's downright raw, while others still can't bring themselves to dish up "bulletin board" material.

"You start talking about that game from the final whistle the week before," offered ex-Griz and ex-NFL kicker Dan Carpenter, a Helena native treading as if Bobby Hauck were still his coach at Montana. "It's very electric. The crowd is always great either place we play."

Former Griz/NFL lineman Levi Horn is more blunt in his analysis. Which may have everything to do with Hauck, his old coach and a Big Timber native.

To hear Horn and some of his ex-teammates tell it, you'd be hard-pressed to find a man more hell-bent on beating the Cats than Bobby. That's saying something when you consider the teams will meet for the 120th time on Saturday.

"He wouldn't even let us stay in the same city when we played over there in Bozeman," Horn said. "He would take us outside the city.

"He'd tell us, ‘I want to hoist the trophy up in front of their fans. I want to let all those fans know why we're Montana and they're the little step-brother. And guess what? You will never beat us.'"

Some call that overkill. But it works both ways. Just ask Bozeman native and former Bobcat linebacker Dane Fletcher, a former member of the New England Patriots.

"They were the biggest games of my life every year, and it was mayhem," he recalled. "It was a ruthless game no matter where we played it."

Over the years the rivalry has caused players and coaches on both sides to behave in unusual ways. Fletcher remembers how he and his teammates skipped class in the days leading up to the game.

"We felt it necessary to take the time to get our minds right," he joked.

Hauck would go to extremes to motivate his Griz in his first stint as head coach. Like the time he brought in an unexpected singing ensemble for practice.

"He had his kids and nephews come in and sing a little fight song about how much they hated the Bobcats," said Colt Anderson, an ex-Griz and NFL safety from Butte "It was a song about how Montana State sucks. It got us pretty fired up."

Shann Schillinger, an ex-Griz and NFL safety who currently serves as safeties coach for Montana, had more than one special memory from practice.

"Coach would bring in a former player during Griz-Cat week and he'd talk about what the game meant to him," he said. "It gives you chills thinking about it.

"I remember before my junior year we had a highlight film the Friday night before the game and Coach put together a video of former players. Guys like Tim Hauck, Kroy Biermann, Lex Hilliard, all those guys were on there and talked about what it meant to them. It was one of the coolest things I've ever seen and I wish I could get my hands on the video."

Ex-Griz and CFL quarterback Cole Bergquist remembers a promise made by Hauck prior to the 2007 Brawl of the Wild.

"He said if we won he'd smoke a stogie after the game on Montana State's field," said Bergquist, a successful realtor who lives in Missoula. "Sure enough he was a man of his word.

"Everything he said the week of Cat-Griz was so genuine. He'd tell you, ‘If we get ahead we're going to run up the score,' and he'd do it."

Travis Lulay is one Bobcat who can look back fondly at the Cat-Griz rivalry. He was at the controls when Montana State ended a 16-year skid in the 2002 Brawl of the Wild. Then his team made it back-to-back wins in 2003 in Bozeman and the one-time Seattle Seahawk went out in style in 2005, winning as a senior.

Lulay bolted Bozeman many years ago, but he hasn't forgotten his wins over Montana.

"My freshman year we had the streak to try to end and I remember a touchdown pass we had on the first series of the first quarter," he said. "It was a low-scoring game, the game ended 10-7, and that was the score that allowed us to hold on for the win. Then my sophomore year Corey Smith returned the opening kickoff for a touchdown for us.

"It was cold every year until my senior year when it was 55 degrees on game day and it was just a mud bowl, a sloppy mess in Bozeman. But I do remember vividly the other games were cold — my freshman year in Missoula it was like a blizzard, the snow was blowing sideways. My sophomore year in Bozeman was the coldest game I've ever played in. It was something like 8 degrees at kickoff."

Ken Amato would love to share his pleasant memories of Cat-Griz from the '90s. But like a lot of former Cats, his teams never got over the hump against a Griz program that enjoys a 69-35-5 series advantage.

"We pretty much blew two opportunities we had to win the game both years I was there," he lamented. "But Grizzly Stadium is probably one of the most fun places to play that I've played in."

Over the years the Cats and Griz have shown they'll try almost anything to get each other's goat. Flea-flickers, halfback passes, double reverses — you're bound to see something unusual each time they meet.

But when it comes to all-time surprises, Montana may have taken the cake in 2008. That's when it stormed out of the tunnel at Washington-Grizzly Stadium wearing copper and gold, the old-school colors it relegated to the attic after winning a national title in 1995.

Can a color make that much difference when both sides are already seeing red? Anderson sure thinks so.

"That's still brought up, every time the game comes up," he said. "Even talking to some of the Montana State guys, they were just in awe and didn't know what to think.

"They see us warming up in our regular colors and then all of a sudden, they thought a different team came running out of the tunnel in the old-school colors. Mentally I think they felt like they were already beat."

Most players involved in Cat-Griz are like the ex-Miami Dolphin' Cory Procter — proud to have simply taken part in the tradition. Proud even though playing conditions like "freezing-ass cold" and "sheet of ice" come up often.

"That's typical Montana," Procter said. "Playing in the frozen tundra and battling it out. It was always great."

Perhaps there's no better way to measure the significance of the Brawl of the Wild than to ask an out-of-stater. Someone like Procter, who hails from Gig Harbor, Wash., or Horn, who grew up in Spokane.

Horn went to the University of Oregon out of high school. While in Eugene, he learned a thing or two about intrastate rivalries and what it means to the Ducks to knock the stuffing out of the Oregon State Beavers.

Yet, for Horn, nothing compares to Montana-Montana State.

"Coming from Oregon and learning our rival was Montana State, I was thinking, ‘OK, whatever. It's another rivalry,' " he said. "But it's not just another rivalry.

"They call that thing the Civil War over in Oregon. But Montana and Montana State, there's much more depth to it. There's families divided. Like the Verlanics — we're talking serious bragging rights."

Alex Verlanic was the starting senior center for the Griz in 2010. His brothers, Andrew and Connor Verlanic, were young reserve linemen for the Cats that year. A cousin, Jim Verlanic, was a two-year starter for the Bobcats. Two other cousins, Karl and Ciche Pitcher, played at Montana.

It's quite a bit to digest all at once. But not as hard as the belly full of humble pie, dished out annually by one Verlanic to the next in Drummond or Anaconda and in homes across Montana every Thanksgiving.

"There's really just nothing like it as far a rivalries go," said former Griz/NFL All-Pro Marc Mariani, who grew up in Havre. "It's an unbelievable experience to be part of."

Brawl of the Wild: Montana State Bobcats players to watch

Here are the key Montana State players to watch when Bobcats play at Montana in the Brawl of the Wild this weekend.