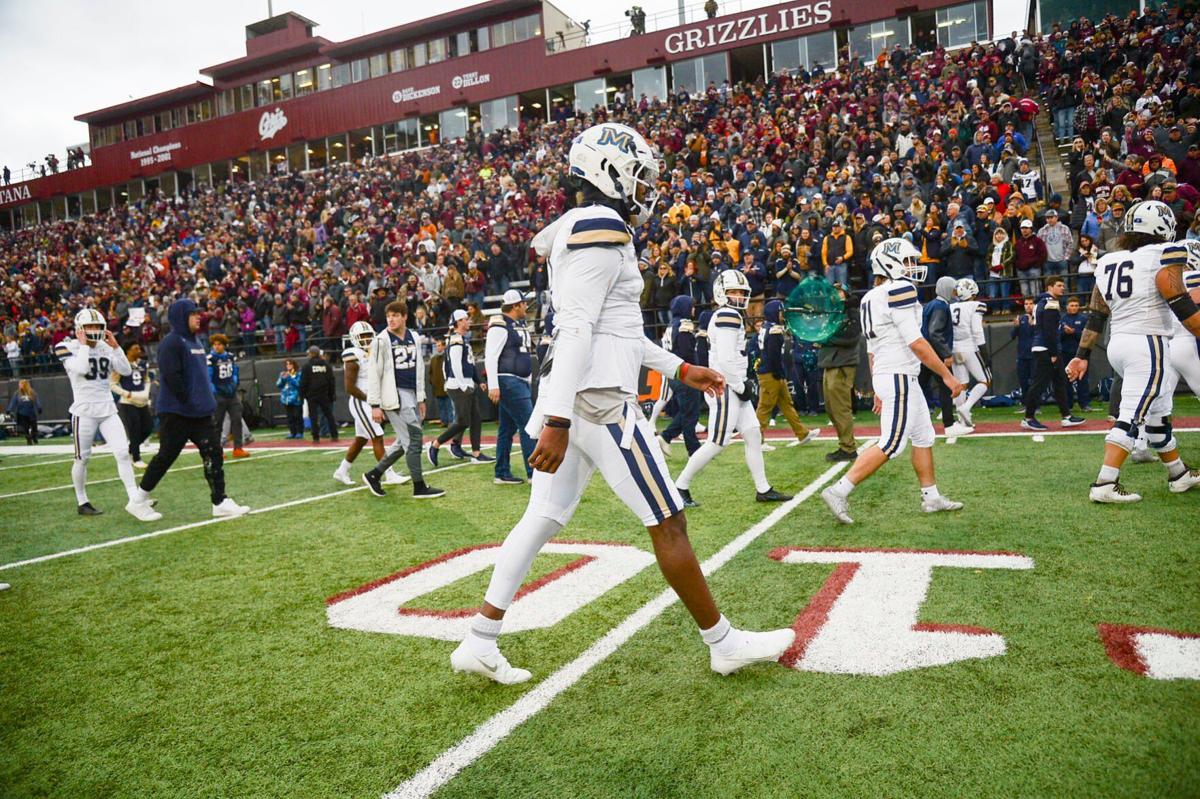 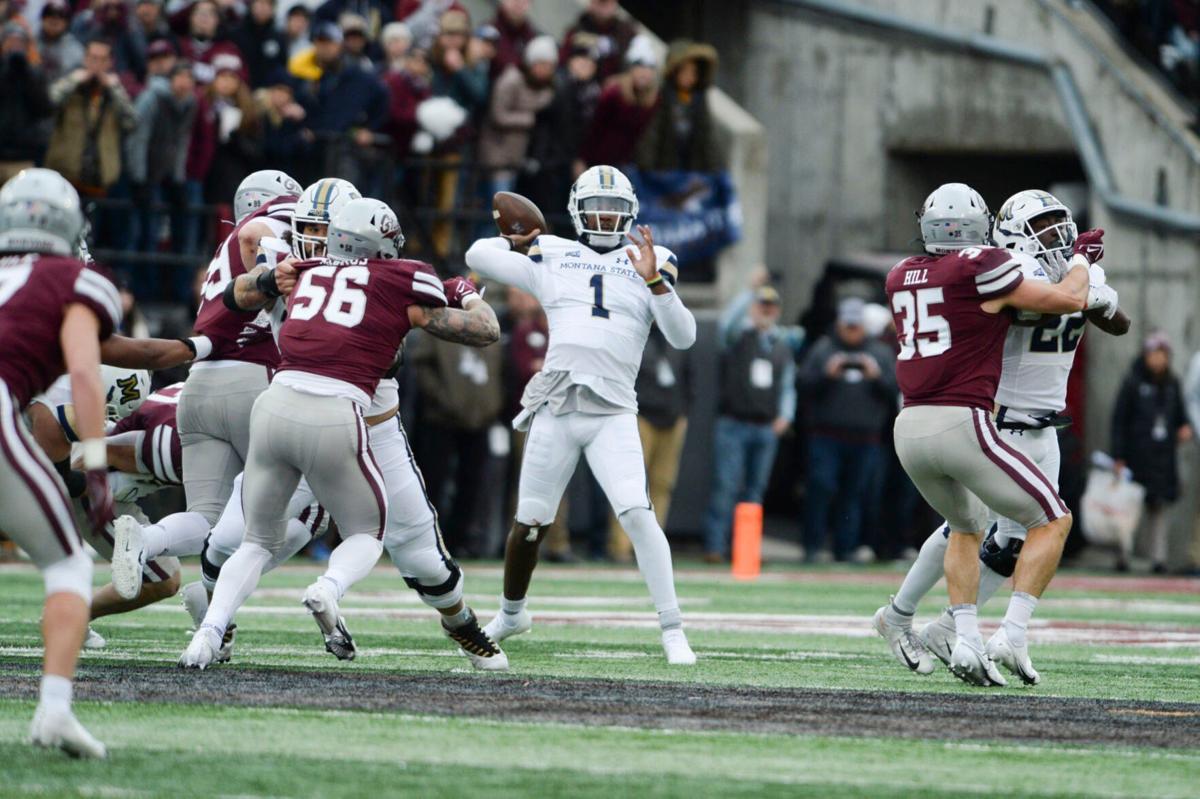 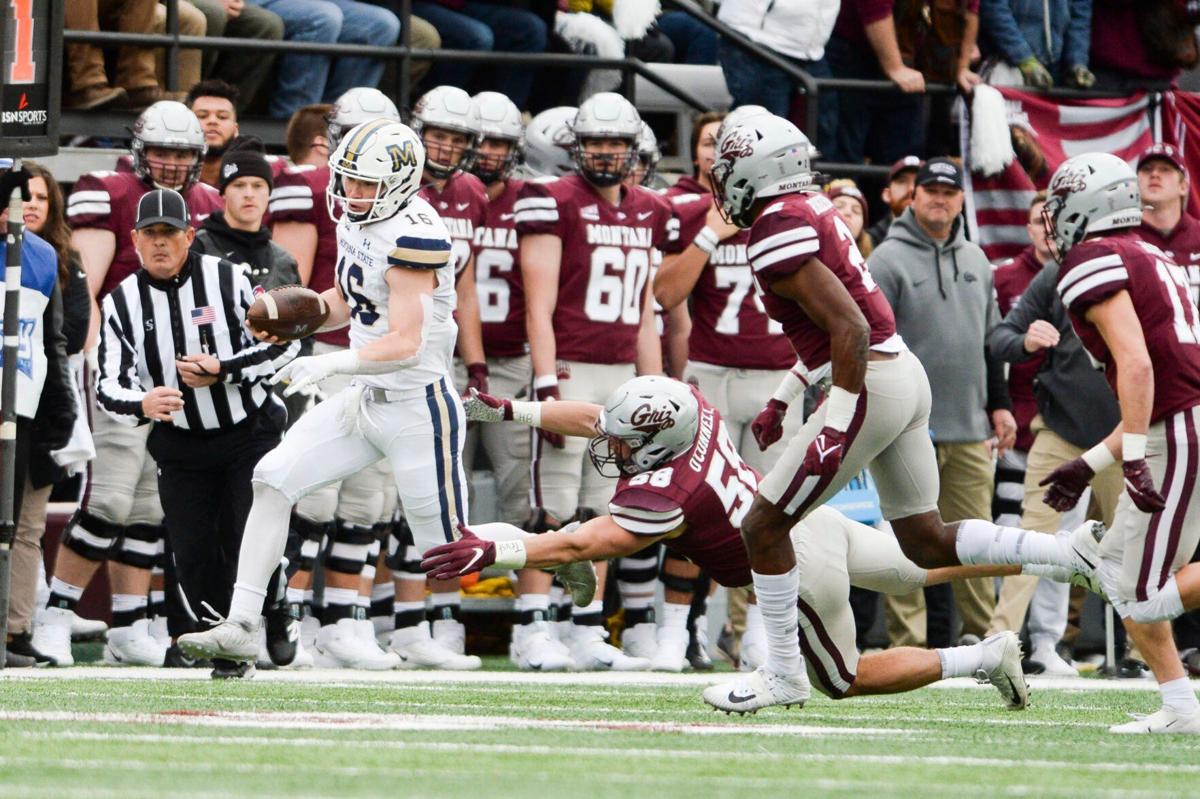 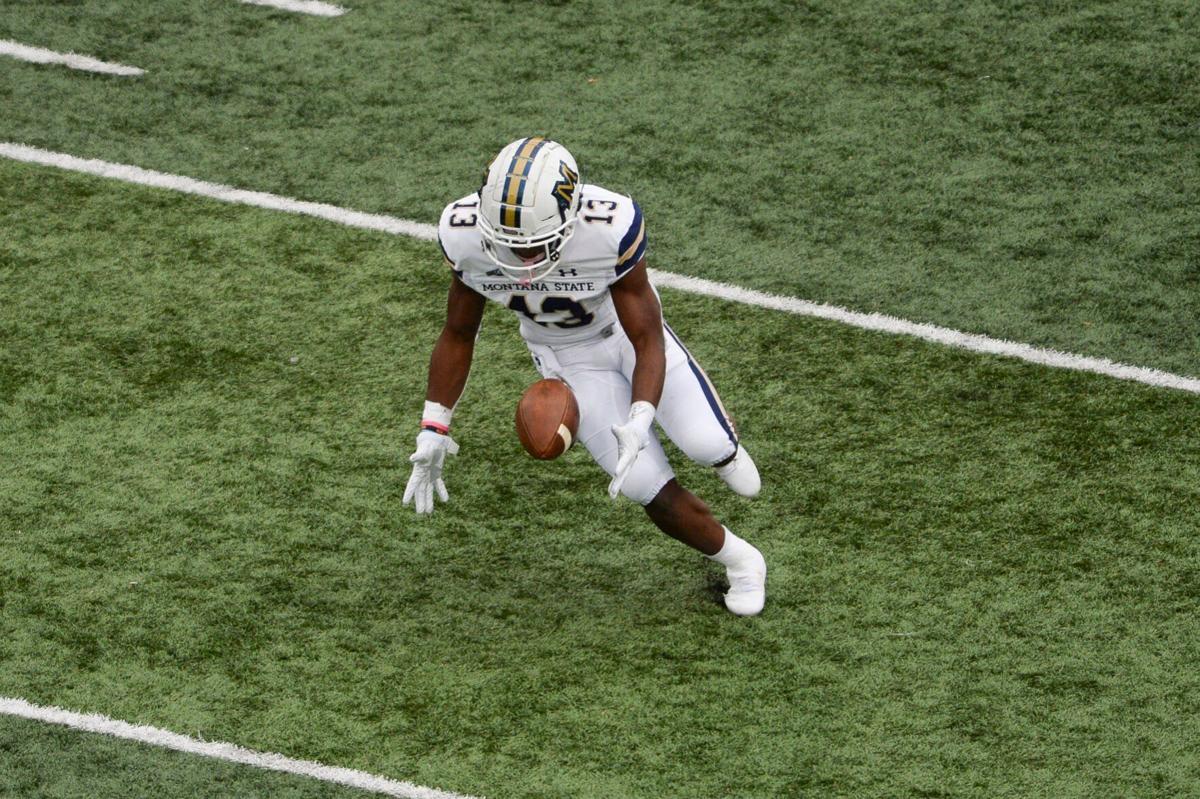 Montana State running back Elijah Elliott briefly fumbles the ball before recovering it against Montana on Saturday at Washington-Grizzly Stadium. 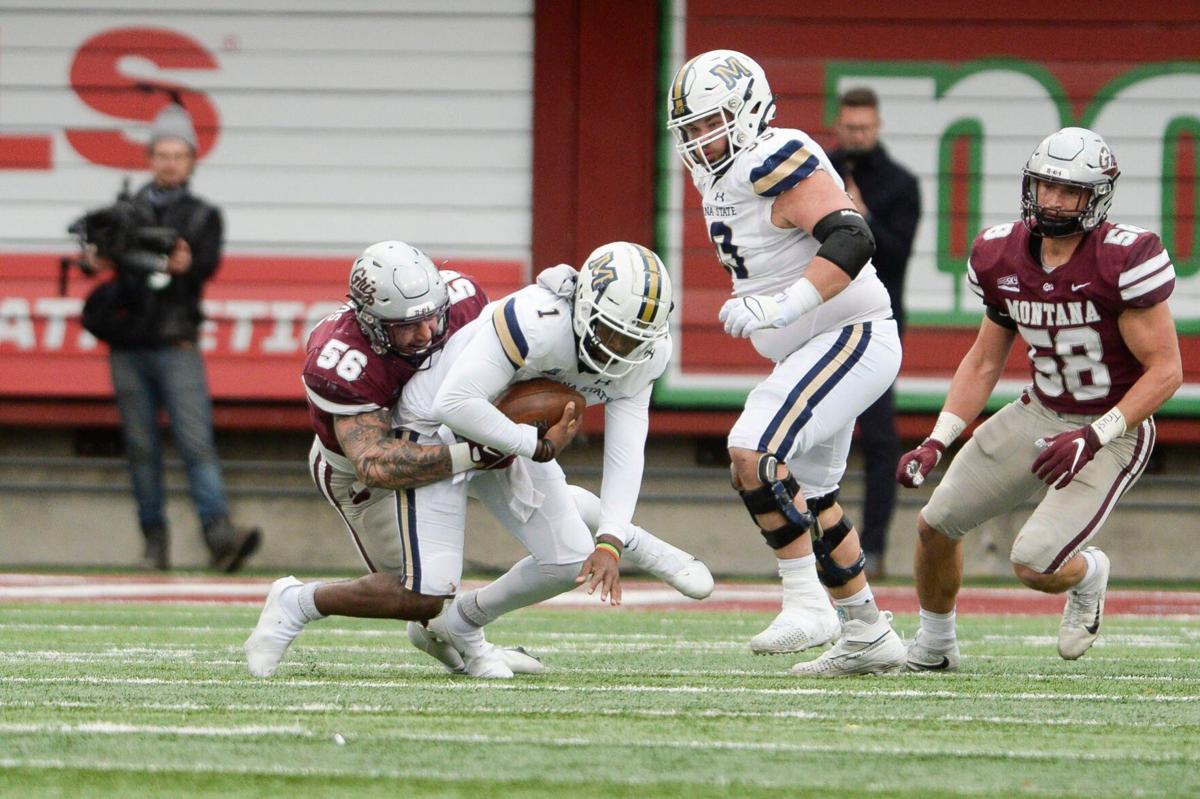 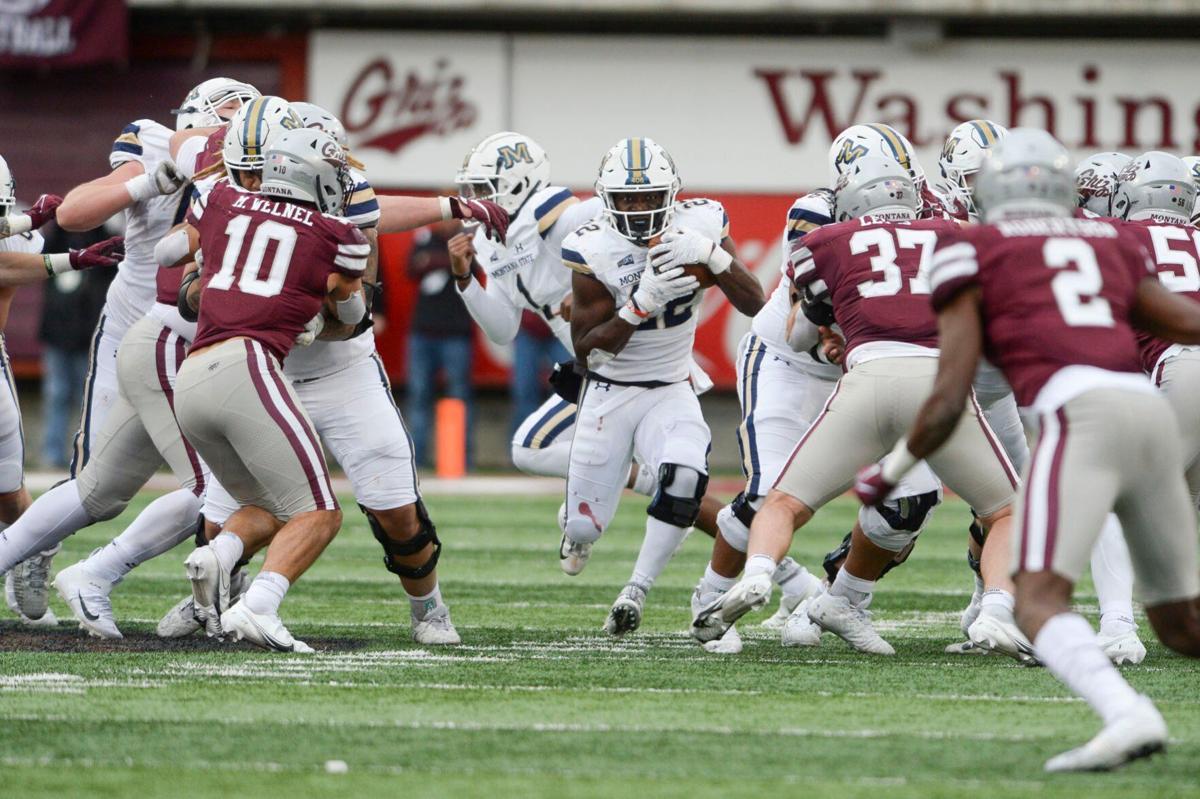 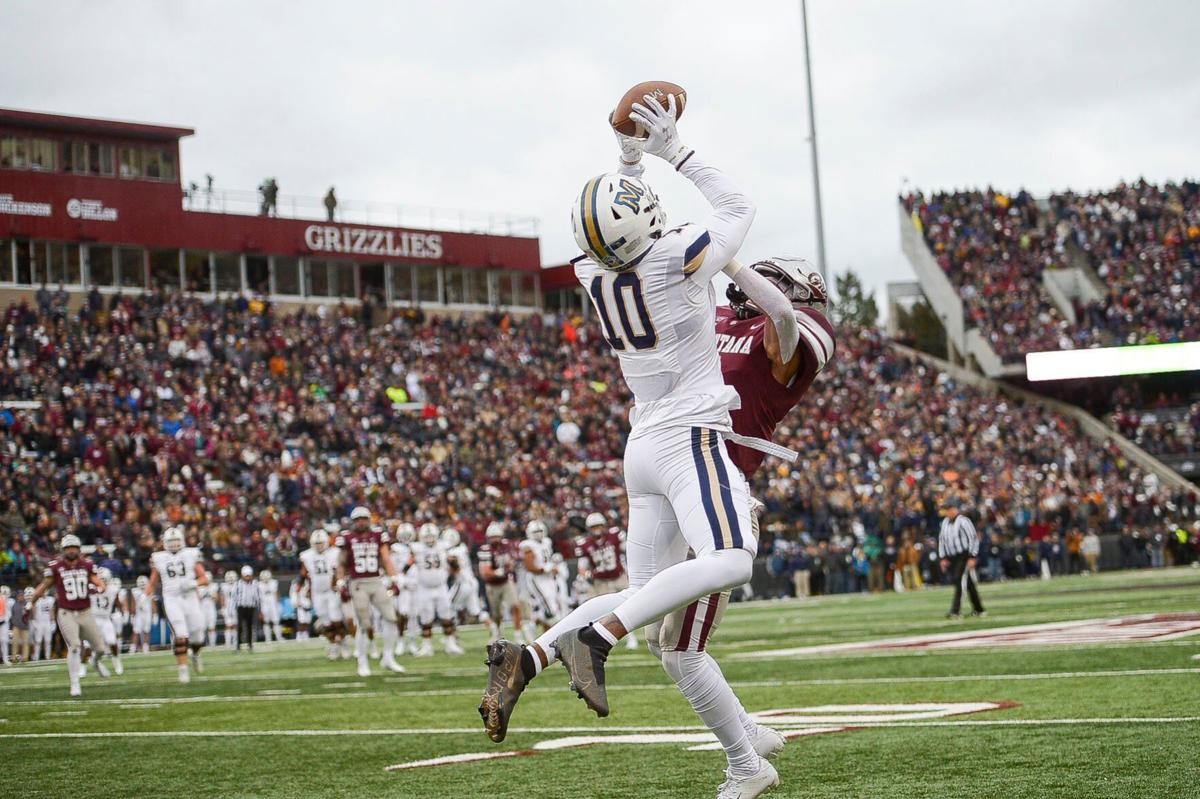 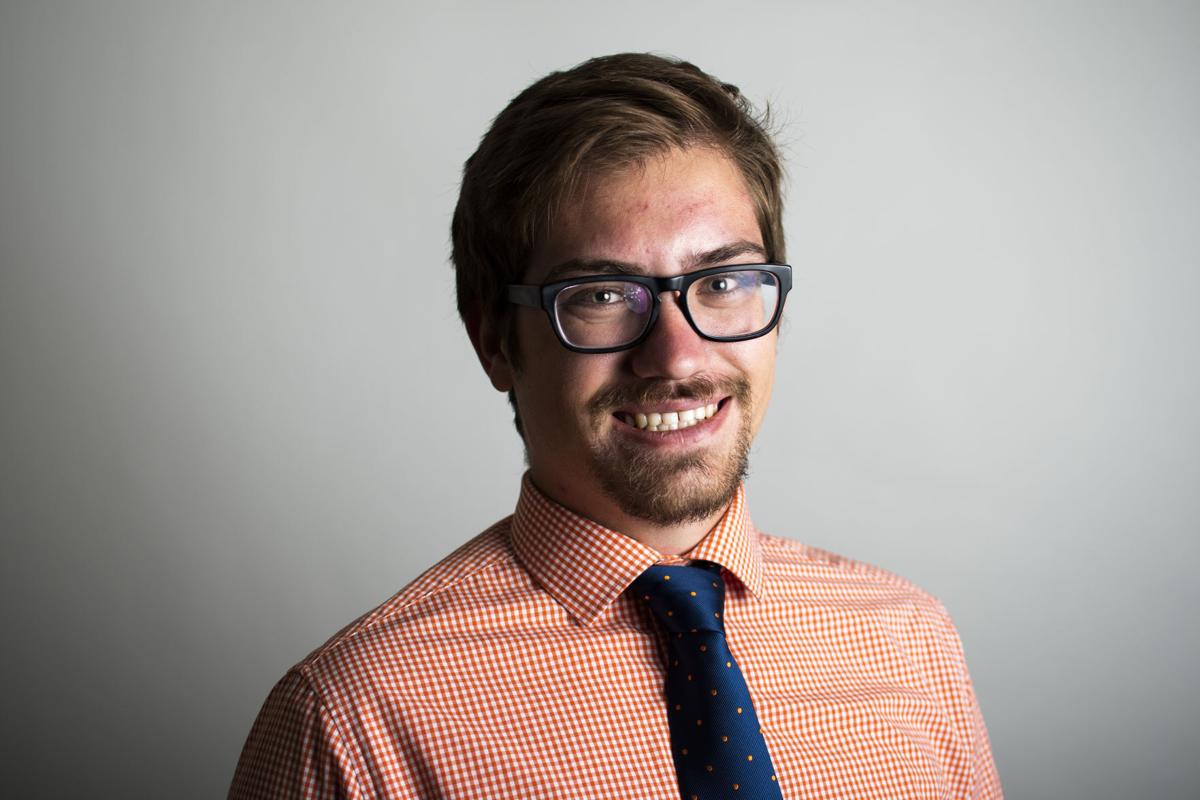 Montana State running back Elijah Elliott briefly fumbles the ball before recovering it against Montana on Saturday at Washington-Grizzly Stadium.

MISSOULA — The offense badly needing life, Montana State made a logical decision — to get Troy Andersen out on the field.

The Bobcats linebacker, an all-American athlete for his remarkable prowess on offense and defense, hadn’t played on this side of the ball all season. Down two possessions to their heated rival, Andersen was a threat to score if he touched the ball.

But the ball didn’t go his way. He was on the field for two plays before going back to the sideline.

A head-scratcher. That’s the best way to describe the Bobcats’ offense.

Bobcats players and head coach Brent Vigen believe their ultimate goal is still attainable. But they also recognize the need to be better offensively to make a deep playoff run.

“It’s just up to us to execute. We’ve just got to go out there and make plays,” Bobcats quarterback Matthew McKay said. “It was on us.”

MSU’s 204 yards is its lowest output of the season. But it’s impossible to point blame in any one direction.

McKay was often under duress. He was sacked four times.

He couldn’t make much happen when he was on the run. On nine rushes, he recorded 23 yards.

McKay was out of sync with his receivers. He completed 12 of 25 passes for 108 yards and a 20-yard touchdown to Nate Stewart with just 48 seconds to go. McKay has passed for less than 150 yards in four of his last five outings.

Isaiah Ifanse, a week removed from missing the second half against Idaho due to a leg injury, was usually hit near the line of scrimmage. Nineteen rushes for one of the best running backs Montana State has ever seen produced just 50 yards, a season low. His longest run was 10 yards.

“He was a guy that we didn’t get into a flow today,” Vigen added. “But he was out there working hard. I really appreciate his efforts, and we need to get him healthy before we play again.”

Late in the first half, the Grizzlies made a field goal for a 10-point lead. With a minute, 54 seconds on the clock, the Bobcats took over at their own 10 with a chance to score, slash the deficit to one possession and go into the locker room at intermission with a little bit of hope.

Run to the left, 2 yards. Pass to the right, 2 yards. Incomplete pass, and punt.

A 21-yard return with less than a minute remaining. No first down, but another field goal. A potential six-point swing over the course of 102 seconds.

“Their defense, coupled with the noise here, is a challenge because they can really, really time things up, in particular on third down,” Vigen said. “They were able to really be the aggressor in those situations.

“That’s something when we’re faced with a similar situation down the road, we’re gonna have to have a different plan for that.”

Vigen credited Montana’s defense for allowing the Grizzles to manage the game how they wanted. McKay noted Montana brought plenty of pressure.

Grizzlies head coach Bobby Hauck, though, was slightly hyperbolic when talking about that unit.

“I’d be hard pressed to name a Montana defense that was ever as good as this one, and it might not be close,” Hauck said. “It was a really nice performance by them today.”

But that’s not enough, clearly. Not when they went three and out six times, punted nine times and didn’t sustain a drive for longer than five minutes until the final trip to the end zone when the fate of the game had already been decided.

“Adjustments and gaining momentum are part of staying on the field, and we had way too many three and outs,” Vigen said. “For us, my guess is, first and second down they were probably the more physical team, too.”

For the Bobcats, the good news is there’s still the postseason to look forward to. A path to a national championship always included facing the best teams in the country anyway.

“We need to move on from this. I think at the same time, though, this should hurt,” Vigen said. “There’s nothing more our guys wanted, and it didn’t happen for us today. But I think on the flip side, they understand that we do have football ahead of us.”

The Bobcats’ run-first style lends well to playoff success. It’s just a little more difficult with the potential of playing on the road in the quarterfinals and semifinals.

And it surely would be more so if the offense plays as it did in MSU’s most important game of the regular season.

A Big Sky team hasn't won a national title since 2010.