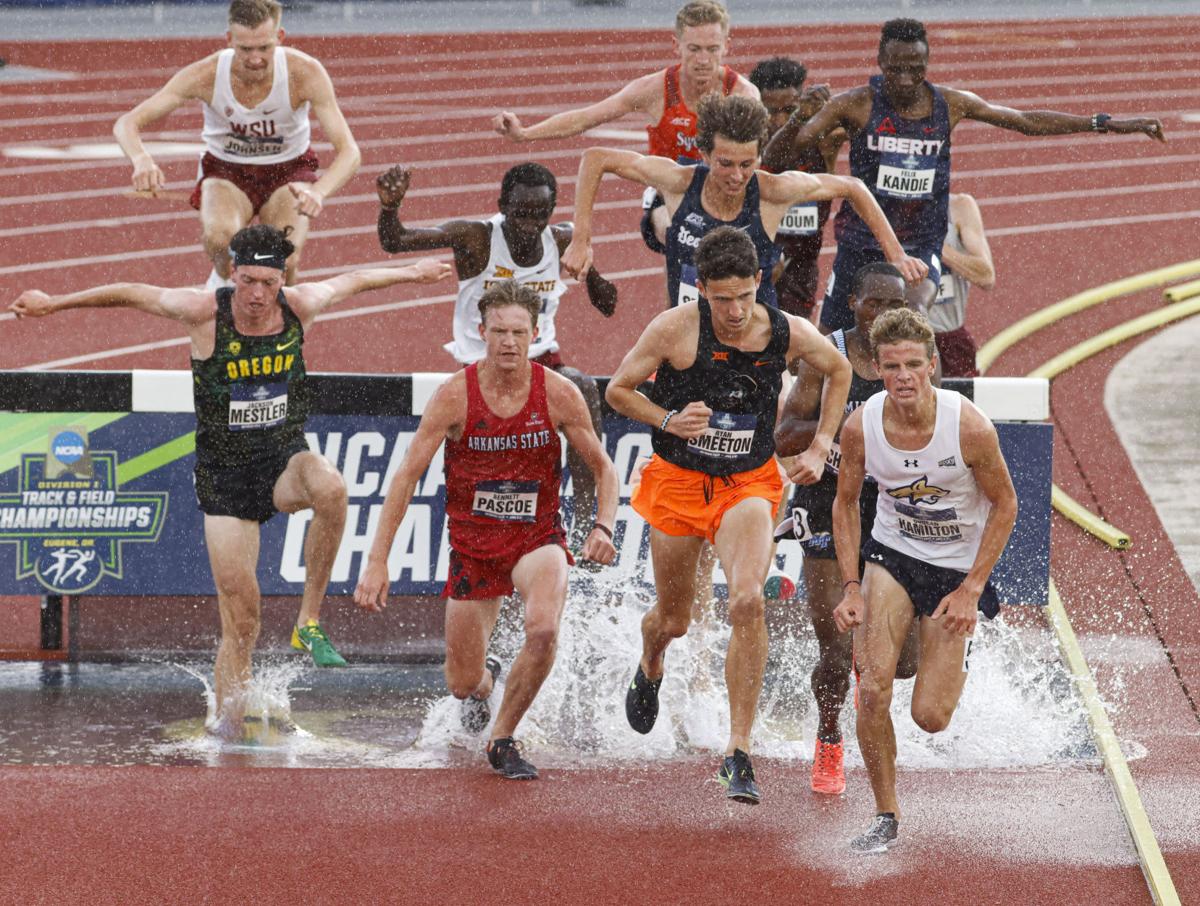 Montana State’s Duncan Hamilton, right front, competes in the semifinals of the men’s 3,000-meter steeplechase during the NCAA Outdoor Track and Field Championships on June 9 at Hayward Field in Eugene, Oregon. 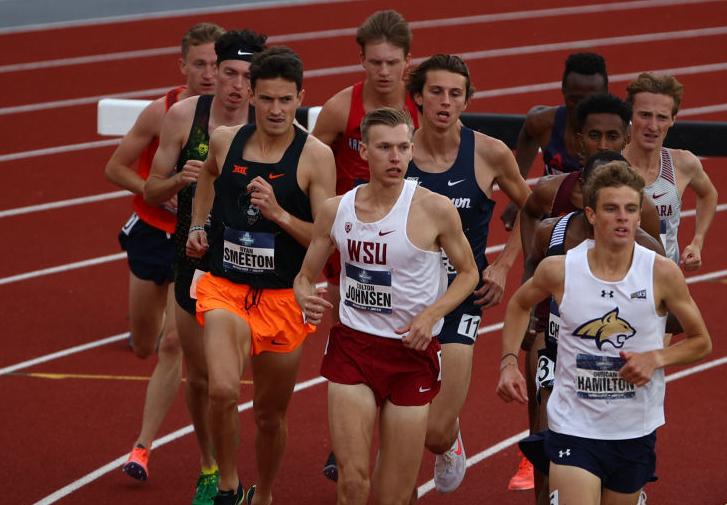 Montana State's Duncan Hamilton, bottom right, leads the pack in the men's 3,000-meter steeplechase during the NCAA Outdoor Track and Field Championships on June 11 at Hayward Field in Eugene, Oregon.

Montana State’s Duncan Hamilton, right front, competes in the semifinals of the men’s 3,000-meter steeplechase during the NCAA Outdoor Track and Field Championships on June 9 at Hayward Field in Eugene, Oregon.

Montana State's Duncan Hamilton, bottom right, leads the pack in the men's 3,000-meter steeplechase during the NCAA Outdoor Track and Field Championships on June 11 at Hayward Field in Eugene, Oregon.

For much of the last two years, the Montana State sophomore has looked at the words “Trials 2020” written across the top of his mirror at home. That time would get him in.

The COVID-19 pandemic postponed the United States Olympic Team Trials until 2021. Given another year to train and prepare, Hamilton made sure to not delay his dream any longer.

When he crossed the finish line of his 3,000-meter steeplechase semifinal race on June 9 at the NCAA Outdoor Championships in Eugene, Oregon, he scanned the board waiting for his time. He knew he was close.

It was a personal best and the top time ever for Montana State’s men.

Further, he accomplished a goal two years in the making. Hamilton, a Bozeman High grad, qualified for the U.S. Olympic Trials by one hundredth of a second.

“It just validates two years of training and working toward this,” he said Wednesday morning, fresh off a run around MSU’s campus. “To have a big PR when it matters the most and get that time and earn an extra two weeks of competition gives me a lot of faith in the training and my coaching.”

The two-time defending Big Sky champion in the event followed up his semifinal performance with a fifth-place finish last Friday in the final. That day, Hamilton was even faster — 8:31.55 — and he became a first-team all-American.

He returned to Bozeman so he could train at altitude in preparation for the Olympic Trials, which begin Friday back at the University of Oregon’s Hayward Field. NBC and NBCSN will provide nightly coverage.

Hamilton will race in the steeplechase semifinal, which is scheduled for 5:29 p.m. on Monday. To make the final at 4:42 p.m. Friday, he’ll have to finish in the top 14 in the preliminary.

“When (the trials) got canceled, I was obviously bummed, but it helped me a little bit because it gave me an extra year to train and get faster, so it actually kind of helped me,” Hamilton said.

In the NCAA final, Hamilton drifted from near the front to the very back before recovering. He said knowing how to overcome those “positioning issues” will be valuable once he’s back in Oregon.

“The biggest thing that I learned is just how important being in good position is when the race starts to move,” he said.

There are 29 declared entrants in the event, but notably absent is Evan Jager. Jager, who runs professionally for Bowerman Track Club, set the American men’s record in the event (8:00.45) in 2015 and was the silver medalist at the 2016 Rio Olympics, where he ran 8:04.28. Jager announced earlier this week he would be missing the trials due to Achilles and calf injuries.

“I was looking at his entrant (status) and saw he never declared, so it’s kind of a shame because it would’ve been cool to maybe be able to line up to someone like him,” Hamilton said, “but there’s still plenty of fast guys in the race that should be able to make it fast.”

The two other U.S. representatives from the 2016 Games will be at the trials — Hillary Bor, who placed seventh, and Donald Cabral, who took eighth.

To qualify for the Olympics, one must run 8:22 or faster and finish in the top three of the final at trials. Hamilton estimates that to make the final, he’d need to run in the mid 8:20s on Monday.

He is unsure how much he will be able to congregate with the other runners, but he’s hopeful it is a welcoming group.

“I’ll do my best to try to make some friends because hopefully these are going to be the people who I will be racing against for the next couple years,” Hamilton said. “I will do everything I can to soak up the experience and be present as much as I can.”

Even with a slower seed time than most of the field, Hamilton never considered not attending the trials.

“I’ve been working toward this goal for a long time, so to be able to go will be amazing,” he said. “Even if I’m near the back of the race, the experience will help so much. Even just going will be huge. Just to see that next level is huge. It makes it so the next time you’re there, you know what’s happening. You’ve done it before, and it’s easier to feel like you belong.”

Montana State will be further represented at the Olympic Trials by Drake Schneider and Carley VonHeeder.

Schneider will compete in the first round of the 400 hurdles at 8:30 p.m. June 24. The three-time Big Sky champion in the event has a personal-best time of 50.12 seconds, which is the 27th-best mark among American men in 2021. The event’s semifinals are June 25, and the finals are the next day.

VonHeeder won the Big Sky javelin championship this season with a personal-best throw of 173-10, a distance that also gave her the women’s school record. It is the 22nd-best mark among American women in 2021. She will compete in the qualifying round on June 25. The finals are the next day.

MSU's Lucy Corbett, who’s from Bozeman, competed in the qualifying round of the women’s high jump on Friday. She finished in 16th place.

Four Bobcats will have at least one more week of competition in their season as they chase spots on Team USA.