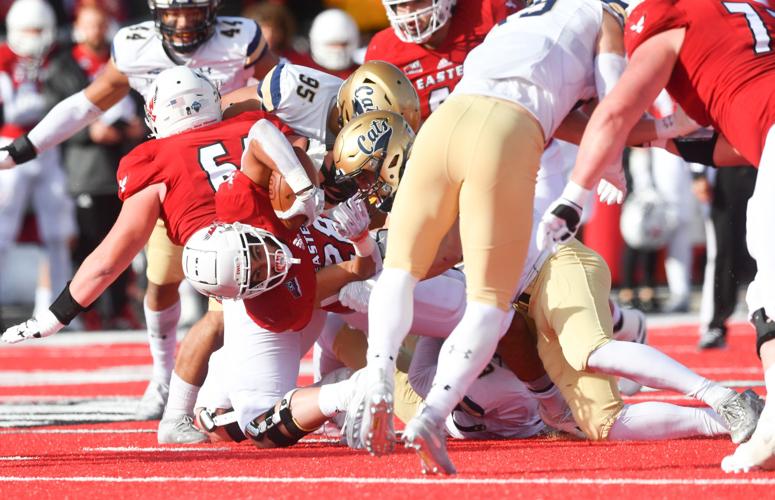 Eastern Washington running back Isaiah Lewis runs the ball against Montana State during the first half of their game Saturday, Nov. 6, 2021 at Roos Field in Cheney, Wash. 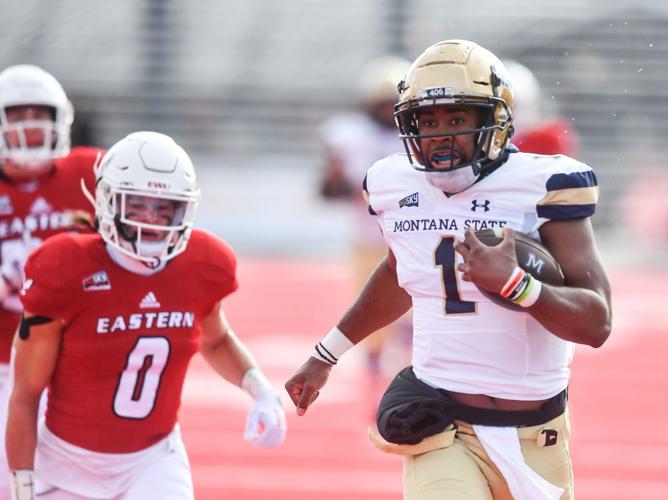 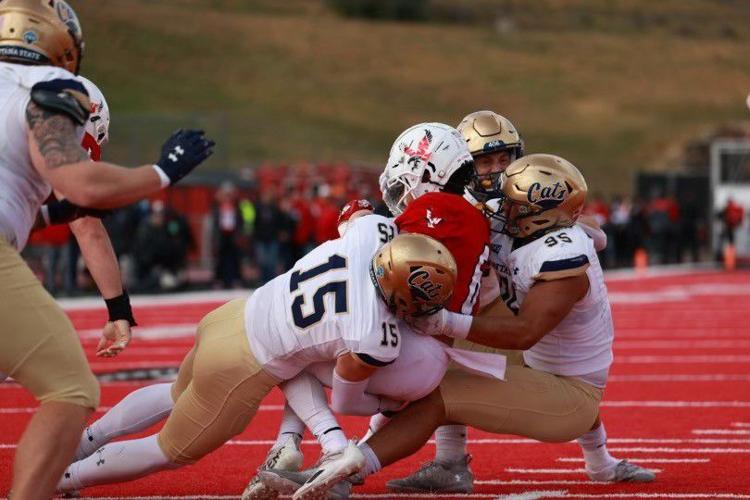 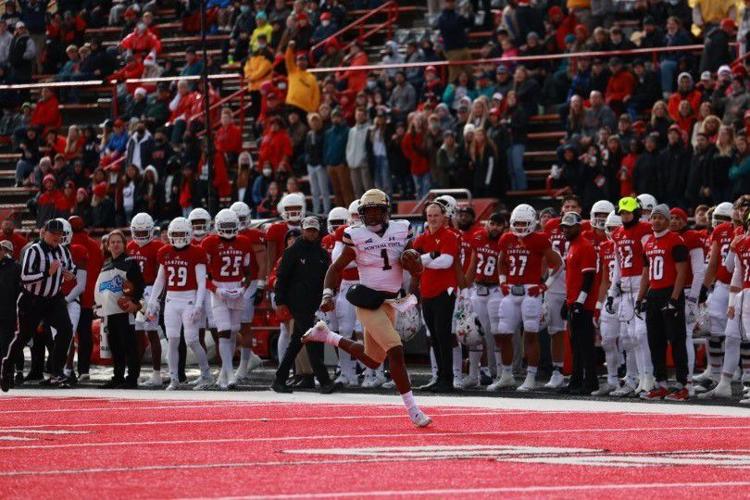 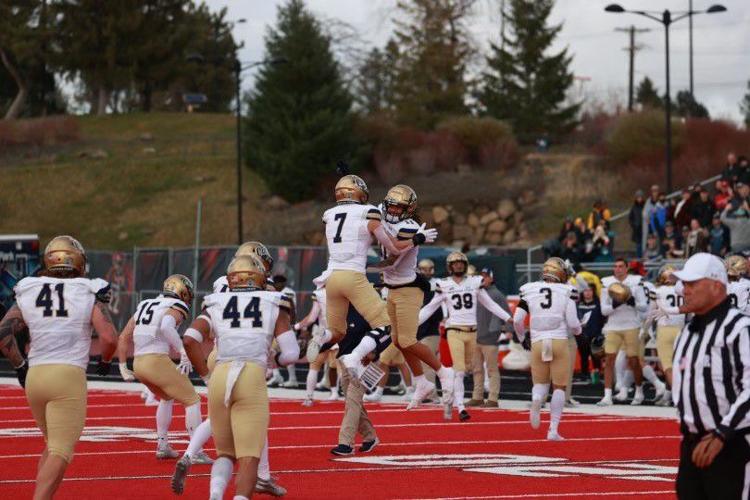 Montana State's Troy Andersen (15), Ty Okada (7) and Willie Patterson (11) celebrate as Chase Benson (41), Daniel Hardy (44) and Amandre Williams (3) run off the field during their game against Eastern Washington on Saturday at Roos Field in Cheney, Wash. 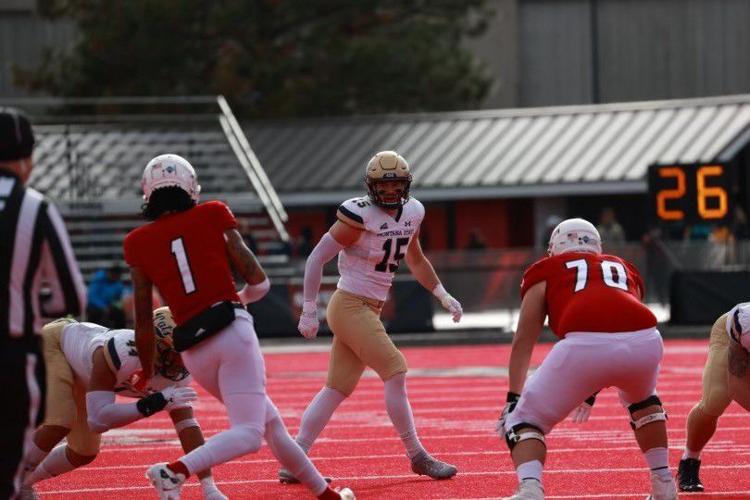 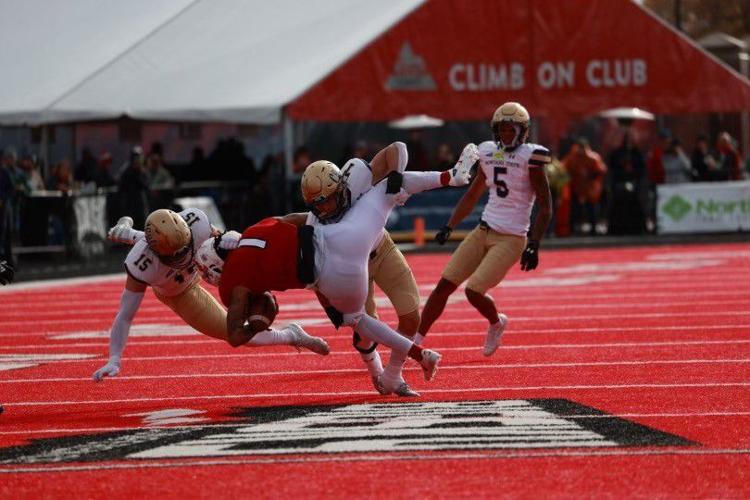 Eastern Washington running back Isaiah Lewis runs the ball against Montana State during the first half of their game Saturday, Nov. 6, 2021 at Roos Field in Cheney, Wash.

Montana State's Troy Andersen (15), Ty Okada (7) and Willie Patterson (11) celebrate as Chase Benson (41), Daniel Hardy (44) and Amandre Williams (3) run off the field during their game against Eastern Washington on Saturday at Roos Field in Cheney, Wash.

A team can overcome all of that when it has a defense as good as Montana State’s.

“We stood up against as explosive an offense as you’ll probably see at this level,” said MSU head coach Brent Vigen.

The Bobcats ended their seven-game losing streak to EWU, a skid dating back to 2011 when they won 36-21 at Roos Field. Their 30-7 win over EWU a year earlier was the last time they held the Eagles to less than 21 points.

Some of those previous seven losses to EWU were close, but MSU struggled to slow the Eagles down. They averaged 42 points per game during the streak.

They are just as explosive, if not more so, this season.

Barriere’s ball security and efficiency against MSU met his standard. He completed 21 of 31 passes (67.7%) and passed for two TDs, and the Eagles didn’t commit any turnovers.

But Barriere threw for 214 yards while rushing nine times for 17 yards (1.9 ypc). Almost all of those rushes were scrambles forced by pressure and good MSU coverage. After trailing 13-7 through the first quarter, MSU held EWU scoreless in the second and third, the first time the Eagles have gone consecutive quarters without points all season.

“Keeping a quarterback at bay that’s as talented as him — and he still made a bunch of plays — but I think we won that battle,” Vigen said. “I’ll take great defense over great offense any day, and I think that’s the way it worked out today.”

Bobcat defense with a BIG play!

Grebe on the sack and the 'Cats are back on offense and driving.

MSU was without starting right guard Taylor Tuiasosopo because of a violation of team rules, Vigen said, and backup offensive lineman Cole Sain, who was injured. But the Bobcats got four key defensive players back.

All-Big Sky nose tackle Chase Benson, starting linebacker Callahan O’Reilly and backup defensive back Tyrel Thomas all played after missing the previous game against Idaho State on Oct. 23. Cornerback James Campbell, who was a starter before exiting MSU's game at Portland State on Sept. 25, played Saturday, his first appearance since that injury.

“There was no panic. Stick to the plan. Maybe tackle a little bit better,” Vigen said. “We didn’t need to reinvent ourselves to beat this team, we just needed to play well. Defensively, we really did that today.”

MSU quarterback Matthew McKay, who completed 55% of his passes for 212 yards total in the previous two games, finished with 253 yards and a TD with a 56.7% completion rate (17 of 30) against EWU. He also rushed for 65 yards on nine carries (7.2 ypc), with a 56-yard TD run on MSU's third play of the game to open the scoring. It’s McKay’s longest rush of the season.

MSU running back Isaiah Ifanse rushed for 217 yards and a TD on 32 carries (6.8 ypc), and wide receiver Lance McCutcheon caught five passes for 150 yards and a 67-yard TD that put MSU ahead 14-13 with 8:14 left in the first half. It was the Bobcats’ longest pass play of the season, made possible by a leaping grab and multiple broken tackles from McCutcheon.

Lance hauls it in and takes the rest of the way himself for the 67-yard TD!

For as good as MSU’s offense was, it made multiple mistakes that lead to crushing defeats for many teams, especially against a foe as talented as the Eagles, who had won 20 straight games on “The Inferno” at Roos prior to their 35-34 loss to Weber State on Oct. 23.

McKay threw an interception and fumbled a snap in the second half that EWU recovered. Blake Glessner missed a 27-yard field goal early in the second quarter. McKay missed McCutcheon on a fourth down pass from EWU’s 4-yard line near the end of the first half. MSU committed six penalties for 65 yards (EWU committed five for 42).

EWU took advantage of the fumble, driving for a TD to cut MSU’s lead to 23-20 with 7:39 left. But the Bobcats were able to build that 23-13 lead because they didn’t allow EWU to capitalize on almost any of their other errors. Their defense was one of, if not the, main reasons.

“We have a team that understands, if something doesn’t go our way, alright, let’s move on. A lot of teams let those plays compound themselves, and then they don’t make the next one,” Vigen said. “The defense out there trusting each other, trusting guys to do their job, is what we’re all about. Proud of the way those guys trusted our coaches, and the coaches came up with a great plan.”

The Eagles punted on their drive following Glessner’s missed field goal. They went three and out after the interception. Two plays after McKay’s failed fourth down pass, EWU lineman Matthew Hewa Baddege was called for holding in the end zone, resulting in a safety and a 16-13 lead for MSU. That was the score at halftime, and the Eagles couldn’t pull within three points of the lead the rest of the day.

“They want to play basketball on a football field, and we’re going to turn it into a physical game,” MSU nickelback Ty Okada said of the pregame message. “That was a great approach because that’s an advantage to us, for sure.”

MSU linebacker Troy Andersen, who finished with a game-high 15 tackles, dropped an easy pick-6 that would have given MSU a two-score lead late in the third quarter. The Bobcats forced a punt on the next play, and they built that two-score lead in the next quarter on a 43-yard TD run from Ifanse.

“We go against them in practice every day, and they just go out there and make plays,” McKay said, referring to MSU’s defense. “They definitely give us momentum as an offense.”

After EWU scored off of McKay’s fumble, the Bobcats were forced to punt with about four minutes left. EWU had all of its timeouts. A classic Barriere-led game-winning drive looked to be on the horizon.

Instead, Bryce Leighton pinned EWU at its own 3 with a punt, and MSU’s defense forced a three and out. MSU ran out the clock on its ensuing drive.

“Even though we didn’t capitalize in the red zone offensively, they were over there on the sideline quite a bit,” Vigen said.

Before Saturday, EWU’s lowest point total in a game this season was 34 (in the Weber State loss and a 34-28 home win over Montana). Okada said he’s “not surprised” his team held the Eagles to 14 points below that and more than 30 below their per-game average.

“We knew that we could do that,” Okada said. “We have a great defense, so that’s the expectation.”

Montana State off their bye week to a top-five matchup at Eastern Washington. Take a look at what you may have missed from the week.

Ifanse has a good chance to finish his MSU career with the most rushing yards in program history.