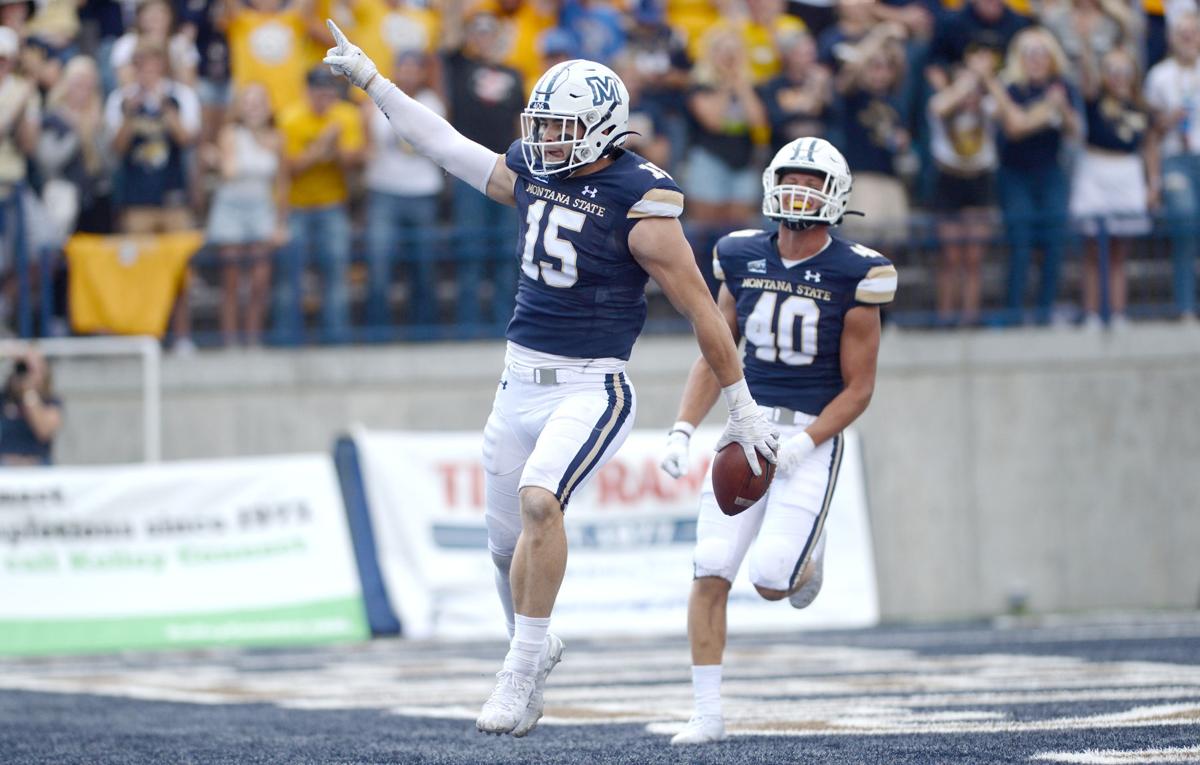 Montana State's Troy Andersen celebrates his interception return for a touchdown as Alex Johnson looks on during their game against San Diego on Saturday at Bobcat Stadium. 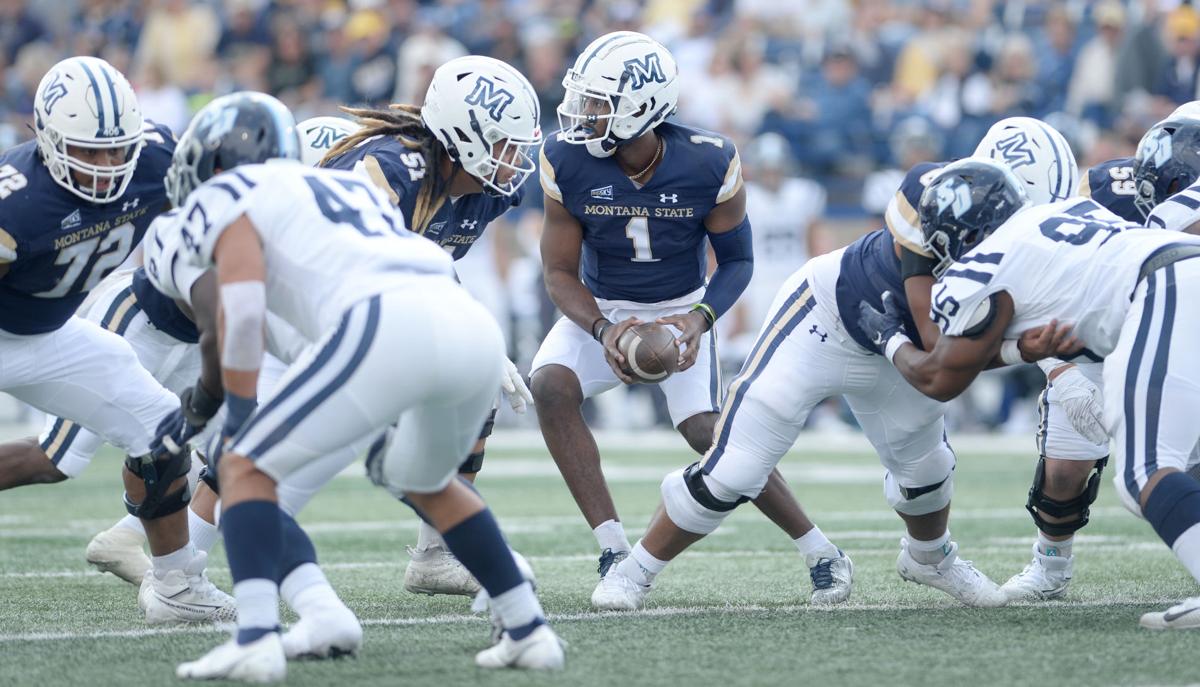 Montana State quarterback Matthew McKay catches the snap and looks to hand off Sept. 18 against San Diego at Bobcat Stadium. 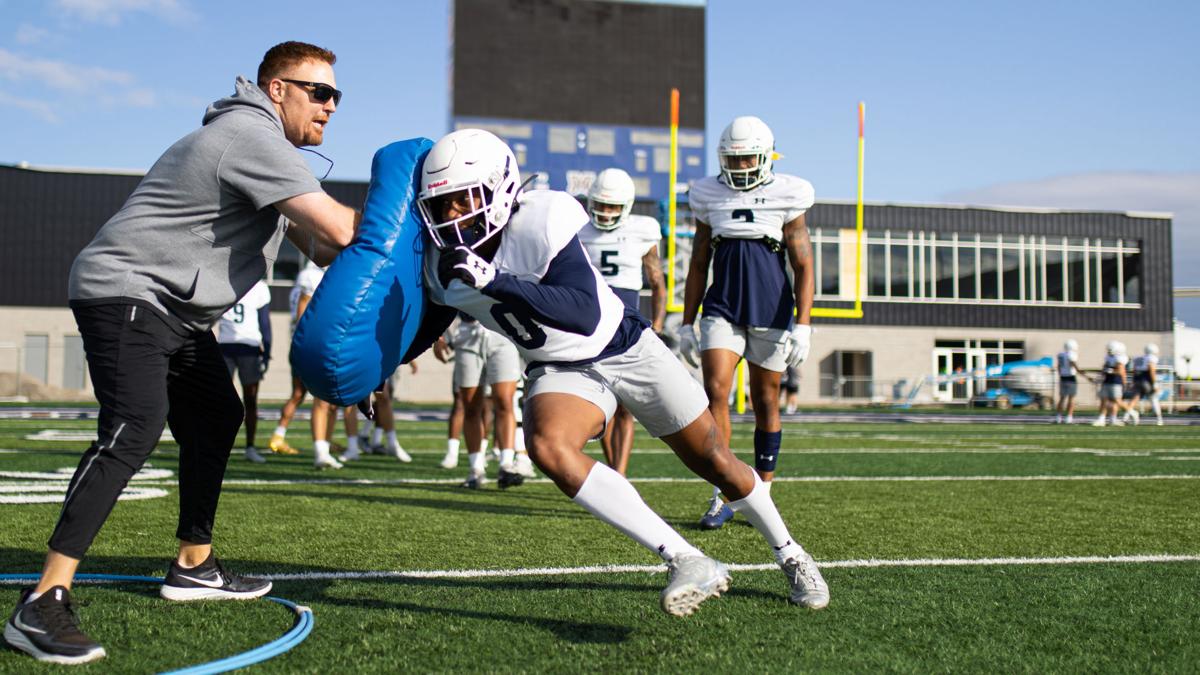 BOZEMAN — The Montana State football team is above .500 entering Big Sky play, thanks to blowout wins over Drake and San Diego the past two weeks. The 13th-ranked Bobcats (2-1) will visit Oregon this week hoping to maintain their winning record this season while reaching .500 in another category.

MSU has a 7-8 all-time record against Portland State. The Bobcats and Vikings (1-2) will meet for the 16th time on Saturday at Hillsboro Stadium, which, unlike last week, won’t be serving free beer courtesy of PSU head coach Bruce Barnum. The game is scheduled to start at 3:05 p.m. Mountain time. It can be streamed on ESPN+ and heard on the Bobcat Radio Network and msubobcats.com.

These two teams last met in 2018, when Troy Andersen’s 211 rushing yards led MSU to a 43-23 victory (Andersen was a quarterback at the time and now plays linebacker). It was the Bobcats’ first game at the 7,600-seat Hillsboro Stadium.

“Hopefully the atmosphere is good,” Andersen said this past Saturday. “I know last time, it seemed like we had more fans than they did. It’ll be fun to get going.”

Here are five things to watch in the Big Sky opener for both teams.

Yes, the entire offense, because all 11 Bobcats will play important roles in trying to beat PSU’s Flex defense.

The Bobcats with the biggest responsibilities will be quarterback Matthew McKay and the offensive linemen. The O-line has arguably struggled the most of any MSU position group so far this season, and the last two opponents (Drake and San Diego) are winless and have less tricky defenses than PSU.

The Flex, designed by Dallas Cowboys hall of fame coach Tom Landry, is hard for even Landry’s former players to explain. The Flex run by PSU defensive coordinator Payam Saadat often puts more defensive players in the box than the offense has blockers. At least one linebacker stands over a guard, playing “at the heels of the defensive linemen,” with the other linebackers set deeper, MSU head coach Brent Vigen said Monday.

“This will be, I guess, the first oddity that we’ve seen. It’s not something a lot of people run,” Vigen said. “If you’ve got the right players, in particular those linebackers that are flexed off the line, they can be hard to handle just because of their alignment. They’re playing a little bit further back. I guess the challenge is, do you treat them as a down lineman even though they’re standing up, but their proximity to the line of scrimmage (is close)? Or do you treat them like a linebacker, where now they’re much closer than a typical linebacker?”

Vigen noted that all five of his offensive linemen might be tasked with blocking PSU defensive tackle VJ Malo, who has 5 ½ sacks in three games this season.

“It’s a defense that, schematically, poses challenges,” Vigen said. “They come at you from different angles, they throw different coverage looks at you, and we’ve got to be on the same page. Our guys need to know what they’re doing, and they’ve got to be able to do it as fast as they can.”

In a fall full of injuries, MSU finally got some positive health news. Defensive back Tyrel Thomas and offensive lineman Cole Sain will suit up after missing basically all of the first three games.

Thomas suffered a knee injury that required surgery during fall camp. The senior was listed as the starting nickelback before camp, and defensive coordinator Freddie Banks said Tuesday that Thomas will play some nickel going forward.

But Ty Okada has thrived at nickel in the first three games, so Thomas will get lots of playing time at cornerback. He’s listed as the backup corner to James Campbell on this week’s two-deep depth chart.

Sain is also listed as a backup, at center behind Justus Perkins. Sain was in that spot on the previous two depth charts as well, but he didn’t play against Drake or USD after suffering an injury in the final minute of the season opener at Wyoming.

Sain was playing left guard when he went down, so if he gets playing time at PSU, it might be next to Perkins instead of in place of him.

MSU didn’t lose any starters to injury in the USD game, but oft-played backup “Will” linebacker Nolan Askelson got hurt early and spent the rest of the game on the sideline in crutches and a walking boot. Vigen said, “I suspect we’re going to be without him for a while.”

Backup free safety Kendric Bailey also wore a walking boot due to an injury he suffered before the game, and he needed a walking knee scooter to move around. Vigen said Bailey “will be out for maybe a week or two more here, but we will get him back.” Vigen praised Bailey’s performance on special teams in the first two games.

Redshirt freshman Alex Johnson will replace Askelson, a 6-foot-1, 220-pound Billings Senior graduate, on the depth chart behind Bozeman’s Callahan O’Reilly. Johnson, a Helena grad, is listed at 6-3 and 203 pounds, the same weight as fellow redshirt freshman Rylan Ortt. The 6-1 Ortt, a Missoula Sentinel grad, is the backup strong and free safety on this week’s depth chart.

MSU has given most of its non-garbage time reps to starters at linebacker and safety, so Johnson and Ortt might not see the field much against PSU. If they do sub in for non-injury reasons, it will reflect well on their performances in practice and further illustrate the coaching staff’s desire to use a deep rotation.

After a strong showing in the 19-16 loss at Wyoming, MSU’s special teams units played under a dim spotlight the next two games. That might change against a seemingly tougher opponent on the road this week.

After the USD game, Vigen criticized a kickoff from freshman Blake Glessner that went out of bounds. The error happened long after MSU took control of the game, but Vigen, ever the coach, did not want it to be forgotten. A play like that can make a difference in a close game.

Glessner also missed a 41-yard field goal last week and missed an extra point against Drake. Those off-target kicks might not signal anything serious, especially considering Glessner has converted the rest of his PATs and three of his four other field goal attempts, including an MSU freshman-record 53-yarder against Wyoming.

But any potential cracks in MSU’s special units could be exposed on Saturday.

PSU’s most high-profile players are quarterback Davis Alexander and defensive back Anthony Adams, and Malo has been excellent. But slot receiver Beau Kelly has arguably had the best season of any Viking so far.

Kelly leads the Big Sky in receiving yards (344), touchdown catches (four) and is tied for first in receptions (20). The 5-9, 165-pound junior had 132 receiving yards at Hawaii and 152 at Washington State. Both opponents are in the FBS.

Okada will probably cover Kelly for chunks of the game, but MSU will almost certainly throw multiple players at him and use various coverages. Thomas might be the Bobcat best equipped to slow Kelly down, making his return extra important.

MSU will play at PSU on Saturday afternoon.