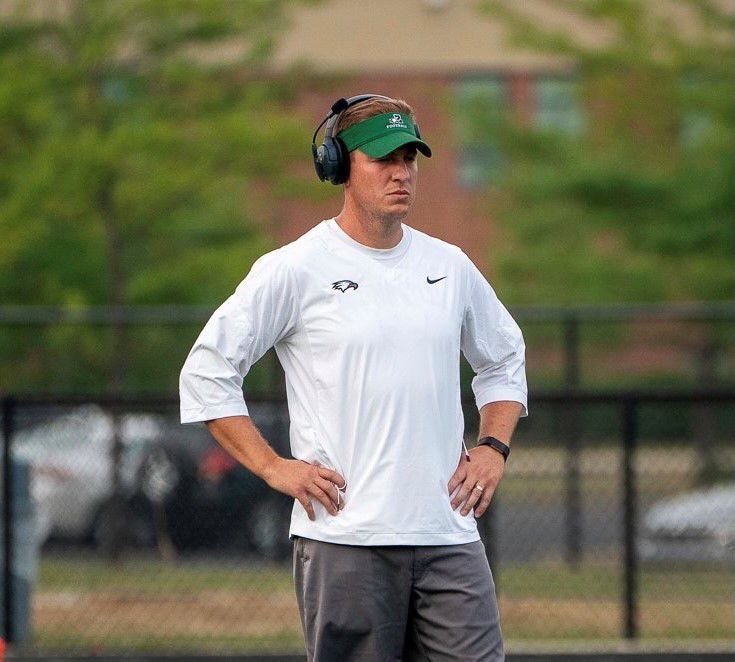 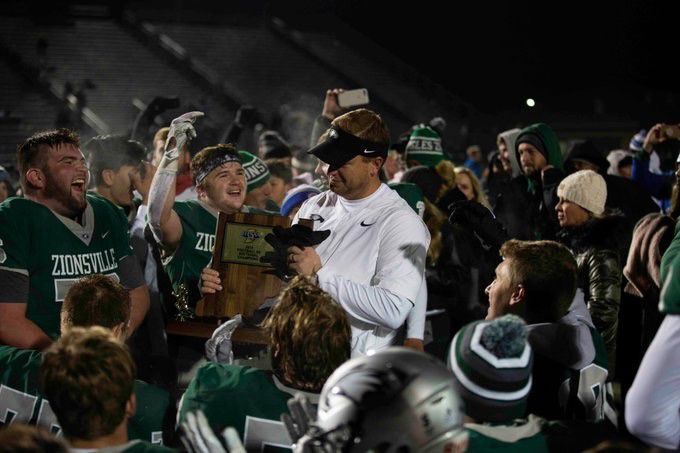 BILLINGS — From Billings to Bozeman and many stops along the way while playing in college, Scott Turnquist has found success on the football field.

The trend has continued for the former Montana State and Billings Skyview standout in Indiana.

In reaching the title game, a late field goal by Zionsville kicker AJ Vinatieri, the son of famed NFL kicker Adam Vinatieri, propelled the Eagles to a regional win. Zionsville also beat a top-three ranked team in the semifinals.

The Eagles then played nationally ranked Indianapolis Cathedral in the championship game over Thanksgiving weekend but fell 46-28 at Lucas Oil Stadium, home of the Indianapolis Colts.

“It was a great year and accomplishment for the kids,” Turnquist, 39, told The Billings Gazette and 406mtsports.com.

Proud of his team

The Billings native, a 1999 Skyview alum who graduated from Montana State in 2004, was proud of his team’s performance this past year.

Turnquist, who also teaches advanced physical conditioning at Zionsville, explained how his team played well against Cathedral, which has won 13 titles in its history and finished the year 13-1.

“It was a lot closer than that. We were within one score in the fourth quarter,” said Turnquist of the Eagles (7-6). “Nobody expected us to win. We could cut loose and play free and the kids gave us a chance to win, which was pretty neat.”

According to Turnquist, just over 2,000 students attend Zionsville. The 5A classification is the second largest in Indiana. In 2019, when Turnquist coached the Eagles to the regional championship game in his first season as head coach at the school they competed in the largest classification, 6A.

With Zionsville being right on the edge of enrollment numbers between the 6A and 5A classifications, Turnquist explained that the school will move back up to 6A next year. This past year, the Eagles played many 6A teams in the regular season because of the school's location in the state.

Prior to becoming the head football coach at Zionsville, Turnquist was an assistant at Carmel High School in Indiana, a school that has over 5,000 students. During his eight years as an assistant, Carmel won two state championships and played in the title game three other years, said Turnquist.

As a player, Turnquist also knows a thing or two about big wins.

A slot receiver at Montana State from 2000-03 — he redshirted in 1999 — Turnquist helped the Bobcats snap a 16-game losing streak against archrival Montana in 2002 and achieve another win over the Griz the next season. The 2002 and 2003 Bobcats teams both won Big Sky Conference championships and advanced to the NCAA Division I playoffs.

According to the 2019 Bobcat record book, Turnquist ranks among the all-time top 10 Bobcats leaders in career receiving yards (1,856), receiving yards per game (46.6), career receptions (135), receptions per game (3.4), and 100-yard games (5). He was also a Big Sky all-conference second-team wide receiver in 2003, when he was a team captain along with his good friend Kane Ioane, also of Billings.

Turnquist said he feels those Bobcat teams helped pave the way for the current bunch, which under head coach Jeff Choate has now beaten the Griz four straight times and advanced to the semifinal playoff round last year for the first time since their national championship season of 1984.

“It felt like that was a point where things started to roll in the right direction and you could build off the momentum,” Turnquist said.

And while he’s busy coaching football in the fall, Turnquist says he’s still able to follow the Bobcats, where Ioane is the defensive coordinator and Jimmy Beal is on the staff as recruiting coordinator and running backs coach. Beal was a redshirt at MSU during the 2002 season and played running back in 2003 during Turnquist’s time with the Cats.

Turnquist explained that when he was a Bobcat it “was a lot of work we did was to win that game” and end the streak against Montana. So, he is understandably pleased with the current winning streak.

“It’s brought a lot of pride to us as alumni,” he said. “It’s good to see the trajectory of that program.”

Married to a Bobcat great

While Turnquist put up stellar numbers at MSU, he might be the second-best athlete in his family.

Turnquist’s wife, then known as Lacy Hinzpeter, was a track and field standout for the Bobcats from 1999-2003 and was inducted into the school’s athletic Hall of Fame in 2014.

“She’s the athlete in the family, that’s for sure,” Turnquist said.

The family has enjoyed their stay in Indiana.

“It’s been an unbelievable experience,” Turnquist said. “We didn’t know what to expect when we moved here 15 years ago.”

With the Bobcats’ football season still scheduled to be played the spring due to the coronavirus pandemic, Turnquist said it would be neat to be able to visit Bozeman during that time.

“We might get back over there to check that out,” he said.

The son of a coach

Turnquist is the son of Bob Turnquist, the former longtime Shepherd football coach who won a state title with the Mustangs and was a co-founder and longtime organizer of the Class B football all-star game.

He said his father was inspirational in him becoming a football coach and also credited many of his coaches at Skyview.

“My dad certainly was a huge influence in my choice of career path. Seeing the way he was able to not only be successful as a coach but also positively influence the lives of players and students was a great example for me,” Turnquist said. “Being able to be around him and the game of football throughout my childhood made me want to participate in every sport I could as a young athlete and those things combined to make me want to continue to be a part of that environment as a profession.

“I was also very blessed with coaches in high school like Ron Lebsock, Mark Wahl, and Kas Ioane that served as positive examples of what coaches should be and how they can impact the lives of student-athletes far beyond the field.”

This past year, Turnquist said he was enrolled in online coaching clinics offered by MSU and he said he still keeps tabs on the Falcons, who ended a 22-game losing streak this past fall and advanced to the playoffs.

“Watching Skyview, and coach Nathan Wahl is a friend of mine, I played basketball for his dad (Mark Wahl), I’m very proud of my Falcons,” he said. “I’m proud of what they are doing to get things back going.”

One of the questions Turnquist said he is frequently asked by friends in Montana is how the football competition stacks up in the Treasure State compared to Indiana.

“I’m so proud of where I’m from and the level of athletics and the football in Montana is great,” he said. “The best players in Montana can play anywhere in the country. The players are great and the coaches are phenomenal. It’s so neat to see people from Montana and the colleges in Montana have success.”

FARGO, N.D. — When Travis Jonsen cut into the end zone on a 1-yard touchdown run early in the second quarter Saturday, Montana State had a gri…