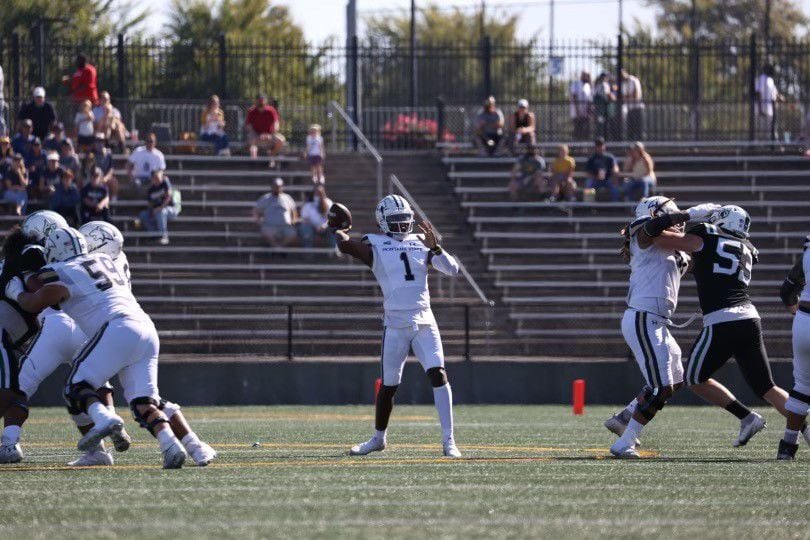 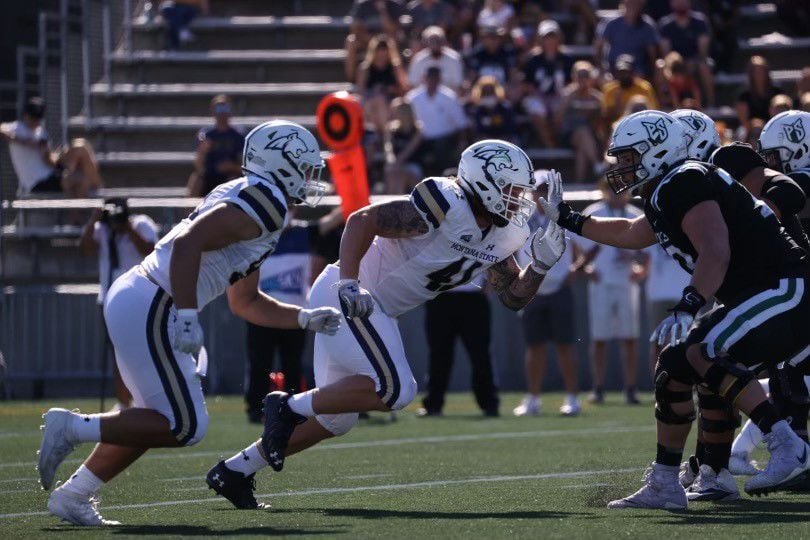 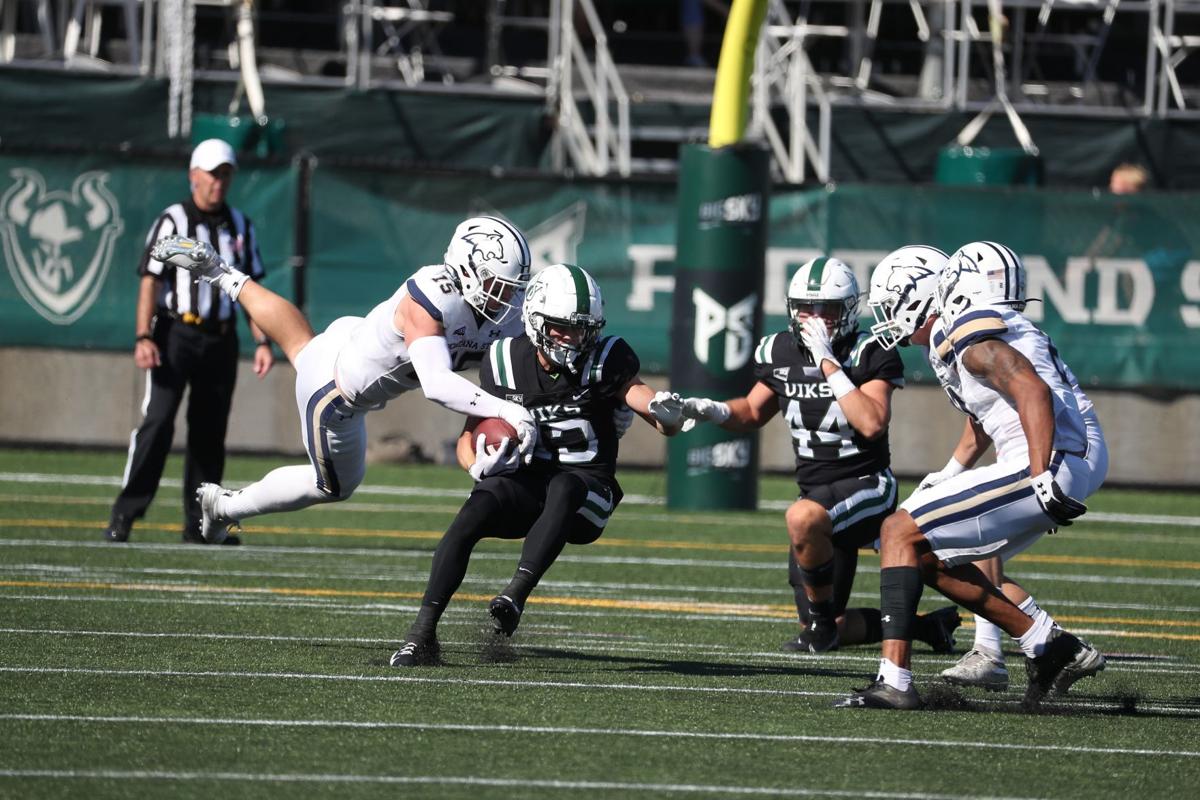 HILLSBORO, Ore. — Montana State wide receiver Lance McCutcheon couldn’t pinpoint a specific turning point in Saturday’s game at Portland State, but it was in the second quarter, he said.

The 13th-ranked Bobcats scored twice in that quarter, both on Blake Glessner field goals. The first was set up by a 46-yard run from MSU junior running back Isaiah Ifanse. The second was preceded by three completions for 52 yards from junior Matthew McKay to McCutcheon.

When the offense looked shaky and the outcome looked uncertain, Ifanse and McCutcheon broke out, and they lifted the Bobcats (3-1) to a 30-17 win over the host Vikings (1-3) in the Big Sky Conference opener for both teams on Saturday at Hillsboro Stadium.

“We came on the road, found a way to win, got our first conference win, so we’re pleased with that,” MSU head coach Brent Vigen said. “We would’ve loved a faster start, for sure, but I think the good thing was we hung in there.”

Ifanse finished with 217 rushing yards (10 short of his single-game career high) and a touchdown on 30 carries (7.2 ypc), and McCutcheon caught eight passes for 161 yards and a TD. Before those two reliable veterans grabbed control, the Bobcats looked like they were in for a close win, at best.

MSU, which was favored by 13 points, fell behind for the first time since its season-opening 19-16 loss to Wyoming on Sept. 4. Freshman kicker Gianni Smith made a 41-yard field goal with 9:43 left in the first quarter to put PSU ahead 3-0.

Glessner tied it up with a 34-yard field goal on the next drive, which began with a 29-yard run from Ifanse. The 5-foot-10, 205-pounder from Bellevue, Washington, also carried the ball on the next three plays for 19 yards.

“The O-line did a great job, and we kept on running the right plays,” Ifanse said. “Throughout the whole entire game, we were just giving them body shots, body shots. We were just waiting for the knockout punch.”

McCutcheon was nearly flawless, but the 6-foot-3, 202-pound Bozeman graduate did play a role in McKay’s first turnover of the season. With 13:39 left in the first half, McCutcheon ran an out route when McKay expected him to go deep, and redshirt freshman Semaj Bolin intercepted the pass.

It wasn’t clear if McCutcheon or McKay made the biggest mistake on the play. Whatever the case, the Vikings were in great position to take a commanding lead. They had gone ahead 10-3 late in the first quarter on a 10-yard touchdown pass from senior Davis Alexander to freshman Nate Bennett. It was an impressive leaping catch from Bennett, but the TD also happened because MSU true freshman cornerback Simeon Woodard got beat.

Woodard, who was filling in for an injured James Campbell, made up for his mistake by intercepting Alexander on the drive immediately following McKay’s interception. Woodard’s pick didn’t lead to points for the Bobcats, but it happened in MSU territory on first down, so there’s a good chance PSU would have gone ahead 13-3 or 17-3 if not for the turnover.

“He continues to step up,” Vigen said. “I’m certain the touchdown he gave up was not a good play, but then he comes back with a pick. He’s the type of kid, he’s got that next play mentality, which you really don’t always see in a freshman. Very mature and very competitive.”

Simeon Woodard steps into that pass to get his first INT of his career to give the 'Cats the ball back.

The Vikings, who never led by more than a score, were up 10-9 at halftime. MSU closed the deficit on those Glessner field goals (from 41 and 39 yards) that were set up by Ifanse and McCutcheon.

The attendance at Hillsboro Stadium was 4,095, which is about 15,000 fewer spectators than the Bobcats have seen in any of their first three games. It was also sunny, above 80 degrees and fairly humid. Both McCutcheon and Ifanse said the heat hurt their team’s energy early on, and McCutcheon said the small crowd was a factor.

Vigen said the Vikings’ Flex defense, specifically their coverage schemes, posed problems for MSU early on. He was less down on his team’s energy than McCutcheon and Ifanse were.

“What’s energy? Energy’s doing well? We didn’t do very well, so no one was really excited, so you get frustrated,” Vigen said. “I don’t think we weren’t ready to play. I think Portland State’s a good team, and they came out and made some plays early and made it more complicated for us.”

The Bobcats’ first touchdown of the game gave them their first lead of the game. Ifanse rushed nine yards with 9:08 left in the third quarter to put MSU ahead 16-10, one play after Coy Steel returned a punt 45 yards. Steel got hurt on the return, however, and needed to be helped off the field. He was on crutches the rest of the game.

The Bobcats have their first lead of the day at Hillsboro Stadium!

PSU struck right back, using a 41-yard pass from Alexander to junior Marquis Spiker to set up a 1-yard TD run from Malik Walker at the 4:39 mark of the third.

McCutcheon came through once again, scoring a touchdown on a back-shoulder catch on a 20-yard pass from McKay near the end of the third to put MSU up for good.

“(McKay) got here in the winter of 2019. We obviously didn’t play in 2020” because of the pandemic, McCutcheon said. “We’ve been building that connection ever since. He trusts me and I trust him, so whenever the ball’s in the air and coming my way, you’ve got to capitalize and make a play.”

Lance McCutcheon is up to 7 catches and 115 yards receiving after this TD grab!

The Vikings marched down the field on the next drive and nearly completed a TD pass, but MSU’s defense held strong. Freshman defensive end Brody Grebe, a Melstone native, sacked Alexander and forced a fumble that was recovered by Helena’s Chase Benson.

"That football team is physical," PSU coach Bruce Barnum said. "I thought we matched it for most of the game, and then there at the end, we got taken over a bit by their run game and momentum."

On the next drive, McKay completed a 46-yard pass to McCutcheon to set up a 9-yard TD from McKay to freshman running back/fullback Jaharie Martin with 9:03 left.

A defensive stand in their territory gave the Bobcats the ball with 6:30 left, and the offense ran out the clock.

“I love how we were able to close that game out. Defensively, making the stops we did. Offensively, scoring and then finishing on the field at the end,” Vigen said. “Pleased with the effort, but plenty to improve upon.”

MSU’s defense had four sacks: 1½ from senior defensive end Daniel Hardy, one each from Grebe and senior end Amandre Williams and half of one from senior linebacker Troy Andersen. Hardy, a native of nearby Beaverton, Oregon, and Andersen both led the Bobcats with seven tackles, and Hardy had 3½ tackles for loss.

“It felt great, especially to do it in front of my family. I’ve got half of my whole family here. Just played our hearts out for them,” Hardy said. “We did a good job banding together as brothers and coming out and winning this as a family. It was a good, hard win.”

The Bobcats will host Northern Colorado next Saturday for their Big Sky home opener.

The Bobcats (2-1) are on the road at Portland State (1-2), where they'll open Big Sky Conference play.