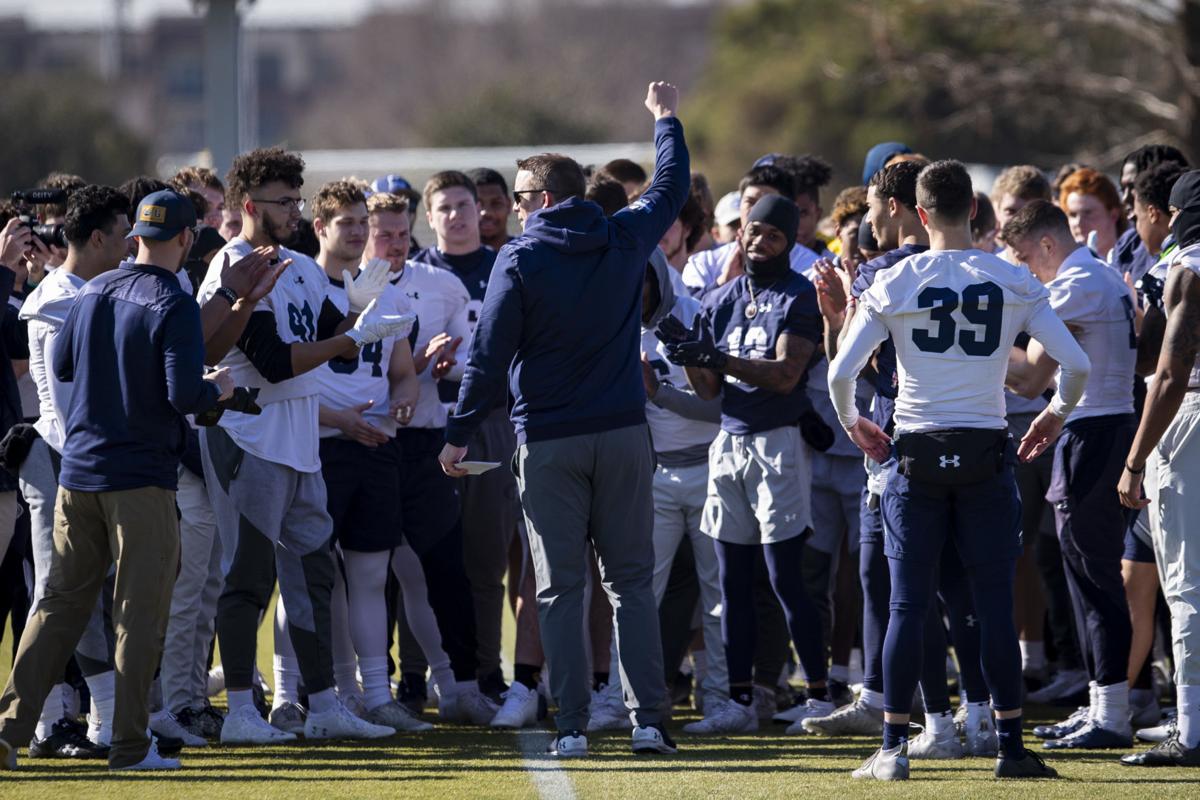 Montana State's head coach Brent Vigen talks to his players at the end of a walk-through outside of Toyota Stadium in Frisco, Texas, on Friday. 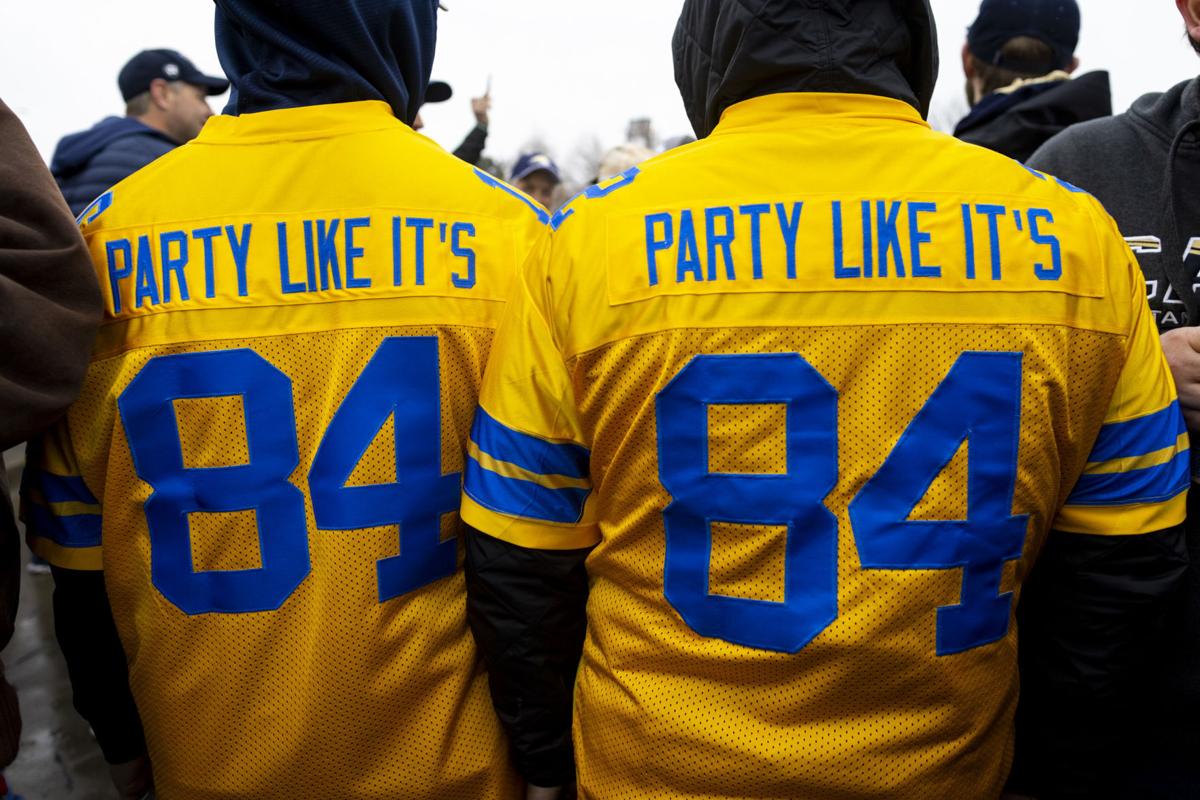 Bobcat fans in the Montana State tailgating area outside of Toyota Stadium in Frisco, Texas on Saturday, Jan. 8, 2022. 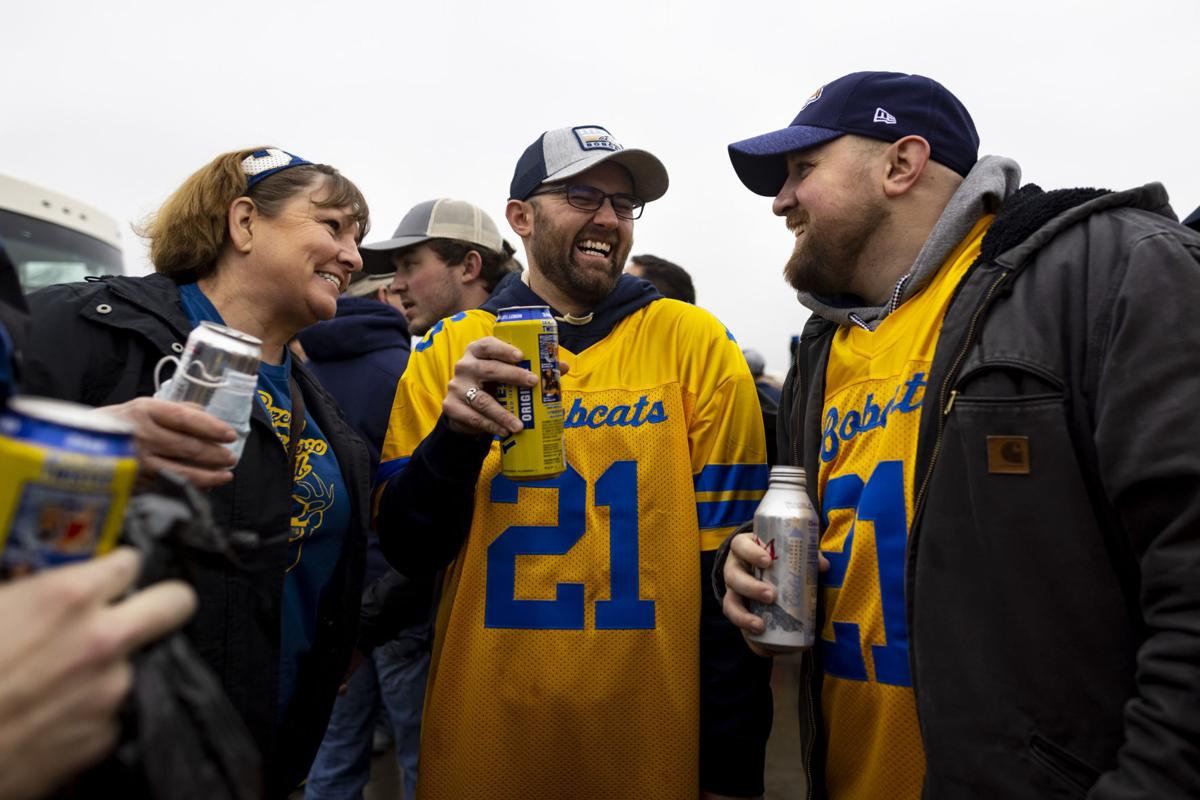 Shelly Vick, left to right, Adam O’Brien, and Jason Black hang out in the Montana State tailgating area outside of Toyota Stadium in Frisco, Texas on Saturday, Jan. 8, 2022. 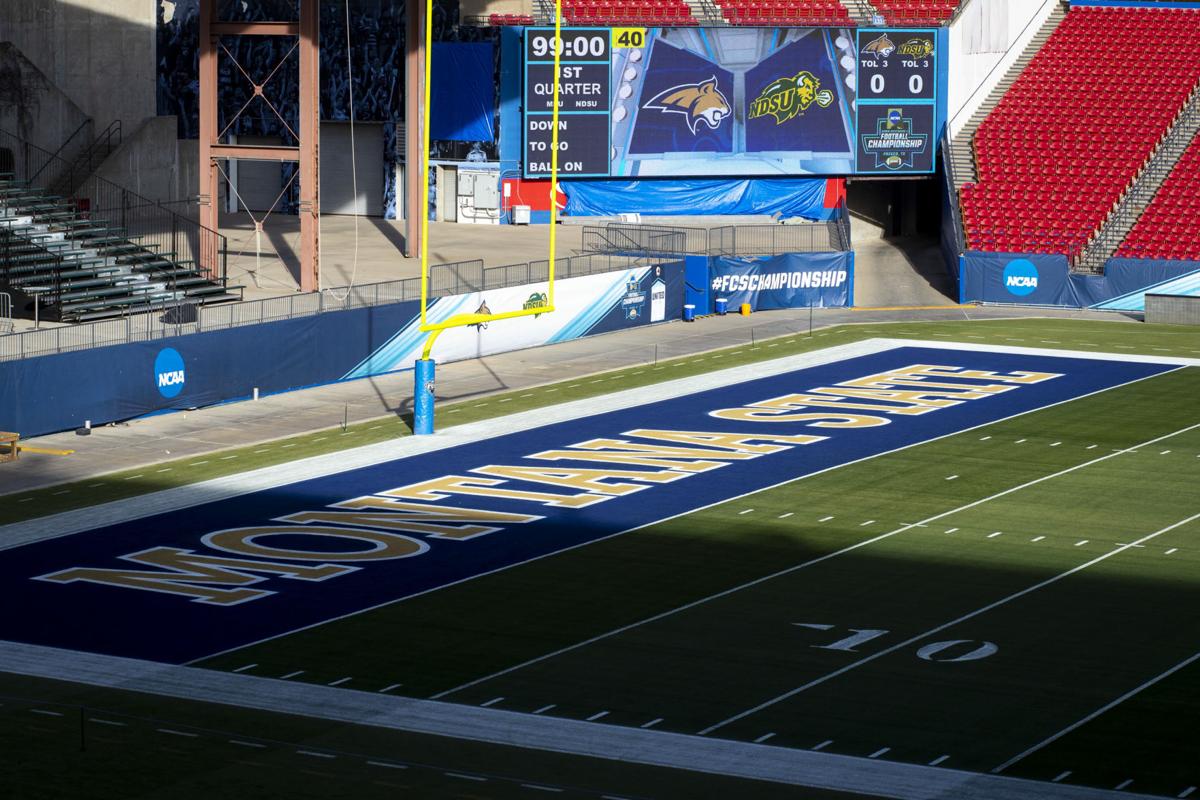 The north end zone of Toyota Stadium is painted for the Montana State Bobcats.

Montana State's head coach Brent Vigen talks to his players at the end of a walk-through outside of Toyota Stadium in Frisco, Texas, on Friday.

Bobcat fans in the Montana State tailgating area outside of Toyota Stadium in Frisco, Texas on Saturday, Jan. 8, 2022.

Shelly Vick, left to right, Adam O’Brien, and Jason Black hang out in the Montana State tailgating area outside of Toyota Stadium in Frisco, Texas on Saturday, Jan. 8, 2022.

The north end zone of Toyota Stadium is painted for the Montana State Bobcats.

PREGAME: Eighth-seeded and No. 7-ranked Montana State (12-2) is making its first national championship appearance since 1984, which is also the last time MSU won a national title. The 2021 Bobcats will try to join the '84, '76 and '56 teams on the program's list of national champions.

MSU is "as healthy as we’ve been since the start of the season,” MSU head coach Brent Vigen said Friday. The Cats will be without backup defensive back Rylan Ortt and reserve running back/fullback Jaharie Martin, MSU announced. Ortt filled in well for All-Big Sky nickelback Ty Okada the last two games, while Martin has been a strong blocker and special teams player.

Okada will be available Saturday, Vigen said, as will All-American running back Isaiah Ifanse, All-American nose tackle Chase Benson, backup linebacker Nolan Askelson and backup running back and first-string kick returner Lane Sumner. Backup defensive back Tyrel Thomas is also suited up and he lined up during MSU's run-throughs.

FIRST QUARTER: The opening kickoff went out of bounds, giving MSU the ball at NDSU's 35-yard line. MSU's first play was an 18-yard pass from Tommy Mellott to Lance McCutcheon on a fake run up the middle by Mellott. Mellott converted a third down and 1 three plays later on a run up the middle.

Four plays after that, on fourth and 2, Blake Glessner lined up for a 45-yard field goal. Rather than kick, holder Bryce Leighton tossed the ball to Glessner, who rolled out right looking to pass. But Glessner was pressured and had no open receivers, so he punted, and the ball bounced into the end zone with 11:49 left in the quarter.

NDSU took a 7-0 lead with 6 minutes, 48 minutes left in the quarter on an eight-yard run from Hunter Luepke. That capped an 11-play, 80-yard drive.

The Majestic Beast with the 8-yard trot to give the Bison the lead early! #FCSChampionship pic.twitter.com/TyqpMKbA0G

Mellott got hurt at the end of the first drive and missed MSU's next drive. Tucker Rovig replaced Mellott, who was limping and appeared to be favoring his right ankle, which trainers taped up. The freshman from Butte went in and out of the injury tent and jogged to test his mobility.

Rovig converted a pair of first downs, one on a 15-yard pass to Nate Stewart and a 19-yard run. But MSU's drive stalled out in NDSU territory, and Glessner missed a 43-yard field goal wide right.

SECOND QUARTER: Luepke scored his second TD on the first play of the second quarter, an 11-yard run with 14:56 left to put NDSU up 14-0.

Hunter Luepke with his 2nd TD of the game helps @NDSUfootball extend their lead.

Rovig was back in on MSU's next drive, while Mellott stood on the sidelines with a headset making signals. The Bobcats converted a first down but punted on the next series.

NDSU made it 21-0 with 10:50 left in the half on a 76-yard run from Kobe Johnson. As it did on the previous two drives, NDSU's offensive line opened up a big hole up the middle.

On the first play of the following drive, Rovig threw a pass over the middle that was intercepted by Dawson Weber.

The Cats forced a three-and-out on the next drive, the first that didn't end in a touchdown for the Bison. MSU got the ball back with 8:41 left in the half.

On third down and 12, Rovig completed a 30-yard pass to Lance McCutcheon around the seven-minute mark. That gave the Bozeman native 53 yards for the game and 1,166 for the season, breaking the program record for single-season receiving yards. The previous best was 1,149 in 1984 by Joe Bignell.

Luepke scored his third TD on a six-yard run with 32 seconds left in the first half.

Mellott missed the rest of the half after the first drive.

MSU got on the board on the next drive with a 26-yard field goal from Glessner at the 7:43 mark, making the deficit 35-3.

Three plays before the field goal, MSU linebacker Troy Andersen lined up on offense next to the tight end in an H-back/wing position. He got the ball but was tackled for a three-yard loss, and he went back to the sideline.

The Cats got the ball back after forcing a punt, but a deep Rovig pass on fourth and short fell incomplete.

NDSU went back ahead by 35 points when Jake Reinholz made a 37-yard field goal with 38 seconds left in the quarter.

FOURTH QUARTER: MSU got into NDSU territory to start the fourth, but the drive ended with another turnover on downs.

To win their first national title since 1984, the Bobcats will have to beat an FCS dynasty.